How Much We Spent on a Southwest USA Road Trip

Road trip budgets can be all over the place. Taking a road trip in a campervan has even more variation. So it’s important to know that traveling in a campervan can make your road trip cheaper – because camping and cooking your own food lowers costs – but it doesn’t always work out that way. It’s hard to say what we would’ve spent if we had simply rented a car and stayed in hotels the whole time. But here’s a look at how much we spent on a southwest USA road trip, including all the places where our expenses didn’t go according to plan.

These travel expenses are for two people and include our full road trip plus Las Vegas at the end of the trip. We had the campervan for 23 nights and stayed in Vegas for 2 nights after returning the campervan. All amounts are shown in US dollars.

This does not include our flights from Berlin to San Francisco and Las Vegas back to Berlin.

Andy and I rented a campervan from Jucy Vans for 23 nights. This includes the base price for renting it, plus a few extras like camping chairs, bedding kit, kitchen kit, and extra cans of butane.

It also includes full insurance coverage. Since we don’t live in the US anymore, we don’t have any auto insurance that we could use for this, so check with your auto insurance company to see if your policy would cover you while renting a campervan like this.

We also chose Jucy’s 100 miles per day option because it was the most economical for us, even with the overage charges we had to pay for driving more than that. Look at your plan to determine which mileage package works best for you. They have an unlimited option, but we calculated that it would still be more expensive than paying for the extra miles at the end like we did.

Overall our total cost for renting the campervan averages out to about $129.36 per day, or $64.68 per person per day.

Even though the campervan was our place to sleep, we still had to pay for campgrounds. We also booked hotels in a few places where it was going to be too cold to essentially sleep outside. And we stayed with my best friend in Vegas for 2 separate nights, so that was free, although on the second night we still had the campervan.

Originally we had planned on sleeping in the van a total of 16 nights, plus 5 nights in hotels during the road trip, 2 nights in a hotel in Vegas, and 2 nights at my friend’s house. But a freak cold snap in Utah threw us off course. We ended up ditching our campsite bookings for 3 nights in Moab and 1 night in Zion in exchange for hotels. This meant only sleeping in the van for 12 nights. I’m not including campsite costs we lost due to canceling at the last minute, but that was almost $80.

So the total nights for this trip comes to 25. This means we averaged about $93 per night, or $46.50 per person per night on lodging. Which I know sounds crazy for a trip that was supposed to be heavy on camping and sleeping in a van. But that average is skewed by the low cost of campgrounds and the high cost of hotels. So let’s break that down.

But it turns out hotels near national parks can be really expensive, especially if you book last minute like we did a few times. The hotel we booked in Moab at the last minute was awful and cost over $150 a night. The hotel near the Grand Canyon was more than $250 per night. The one night we booked at Zion was the same price as the 2 nights we spent on the Vegas strip, and the Vegas hotel (the Luxor) was almost our cheapest hotel of the trip. So having to stay in hotels, especially 4 extra nights, really screwed up our budget.

Since this was a road trip, we continually had to fill up the van with gas. This amount is almost entirely gas, with the exception of the $17 taxi to the Las Vegas airport at the end of our trip. There were no toll roads or other transportation costs on our trip.

Food is another area, like accommodation, where we could’ve done better. One of the perks of traveling in a campervan is having a kitchen and being able to make our own meals. But staying in hotels also increased our food spending because we weren’t able to cook in hotel parking lots.

In California and Las Vegas, we had access to Whole Foods and Sprouts, so we bought groceries there, which is a bit more expensive. In Arizona and Utah, we were in more remote areas and shopped at cheaper grocery stores. And because I have a million dietary restrictions, I often ended up with more expensive items anyway, like almond milk for my cereal and gluten free bread. We also over-bought in a few places and ended up leaving a pile of food with my friend at the end of our trip.

Aside from grocery shopping, we ate out more often than we expected. Moab was the only sort of big town we were in for awhile, so we went crazy, plus it’s just not a cheap town. And Utah’s low alcohol percentages meant we bought more drinks, which were priced higher than you’d expect considering their weakness, to even attempt to get a buzz. We of course ate out and drank in Vegas, which was not cheap.

All of this meant we averaged about $61.80 per day, or $30.90 per person per day on food and alcohol. Which probably isn’t a bad average for a trip where we eat out for every meal, but I had hoped this would be lower since we made our own meals in the van for a chunk of the trip.

Lots of activities on a national parks road trip are free! There are tons of hiking trails in the parks, and you can easily enjoy nature without breaking the bank. So for us, this category includes our Canyon X tour (a great alternative to the Upper and Lower Antelope Canyon tours) and the Navajo tour we took in Monument Valley. It also included entrance fees for Monument Valley, Four Corners, Valley of Fire State Park, and Petrified Forest State Park, and our US national parks pass.

Why you should buy a national parks pass

The America the Beautiful pass costs $80 and is valid for one year. It covers admission for the pass holder plus anyone else in the car. The pass works at national parks, national wildlife refuges, and many other national recreation areas and monuments. Here’s a list of all the national parks we visited on our trip and how much the standard entrance fee (per car) is without a pass:

Without the pass, we would’ve spent $315 on national park entrance fees!

Note: The national park pass does not include state parks or Navajo tribal parks.

You can buy the pass at the gate at many national parks, but sometimes they run out, and as we found, sometimes no one is at the gate. We arrived after dark at Yosemite, the first park on our road trip, and no one was at the gate. Since you need a pass or some evidence that you paid the entrance fee, this could’ve caused us problems the next day.

Luckily, before we ever started our trip, we found out REI also sells America the Beautiful national park passes. Many times throughout our trip, I was so happy we bought one through them because we didn’t have to worry about it anywhere along the way.

This basically includes any road trip expenses that don’t fit into another category. Some campgrounds charged a fee for showers while others didn’t, so shower costs are included in the miscellaneous category. We also paid to do laundry at one campground, but we were able to do laundry for free both times we were at my friend’s house.

This category also includes supplies we bought that weren’t food. We bought a cheap yoga mat on sale at Target to use as sort of a welcome mat under the ladder for our van. We also bought a $50 memory foam mattress topper at Target to make the sleeping area a bit more comfortable, and even though we only camped 12 nights, that thing was totally worth the $50. Other things like garbage bags, paper towels, food storage containers, etc. are also in this total.

I didn’t include what we spent on gambling in this total. We’re not big on gambling, so when we were in Vegas, we spent some time at the slot machines just to have the experience. I didn’t track it, but I think we probably spent $30 total and lost most of it. But at least we got a few “free” drinks.

Check out the posts I wrote on Travel Made Simple about the logistics of our trip:

Ultimate Guide to Planning a Campervan Road Trip in the Southwestern USA (This post has all the details about the van itself.)

Where to Stay on Your American Southwest Road Trip

Overall Andy and I averaged about $319.05 per day, or $159.53 per person per day, for 25 days on our western US campervan road trip. So despite the savings potential of the campervan, it was not a cheap road trip. We could’ve spent less by eating out less and drinking less alcohol while we were in Utah. (Seriously, of all places, why is Utah where we ended up doing most of our drinking?) If we had been more careful with our groceries, we could’ve spent less money there. But I think the biggest blow to our budget was hotels. Staying in hotels while driving around in a campervan really increased our road trip expenses.

Despite the high cost of our road trip, I really enjoyed it. I loved the freedom of having our own vehicle, and especially the perks that came with having a campervan, like having a mini kitchen. Climbing up and down the ladder to get to the sleeping area was annoying, but I think this is a type of trip we would do again someday.

Want to catch up on all my US road trip posts? Check them out here: 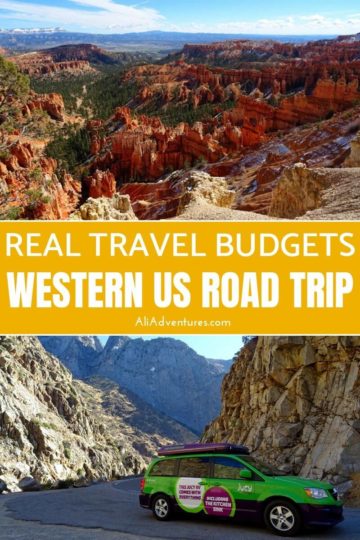 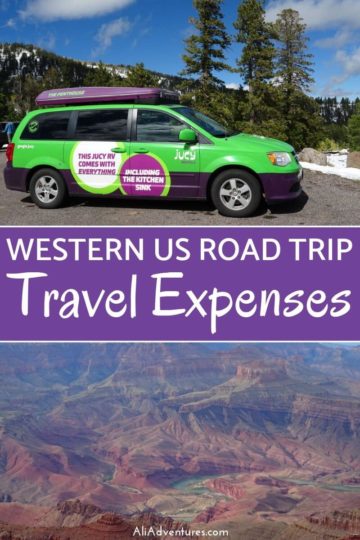 Sign Up
2 Days in Las Vegas: Plus Valley of Fire State Park I Don’t Really Want You to Start a Travel Blog