Many years ago, I visited my best friend in Vegas, and since she had to work part of the time while I was there, I decided to rent a car and take a side trip to Bryce Canyon National Park in southwestern Utah. But this was in 2007, in the days when MapQuest was still a reasonable thing to use, and it routed me from Vegas THROUGH Zion National Park. I just didn’t realize that until I got to Zion. My only options to get to Bryce were backtrack and go around, which would’ve taken at least 2 1/2 hours, or pay the fee at Zion just to drive through. 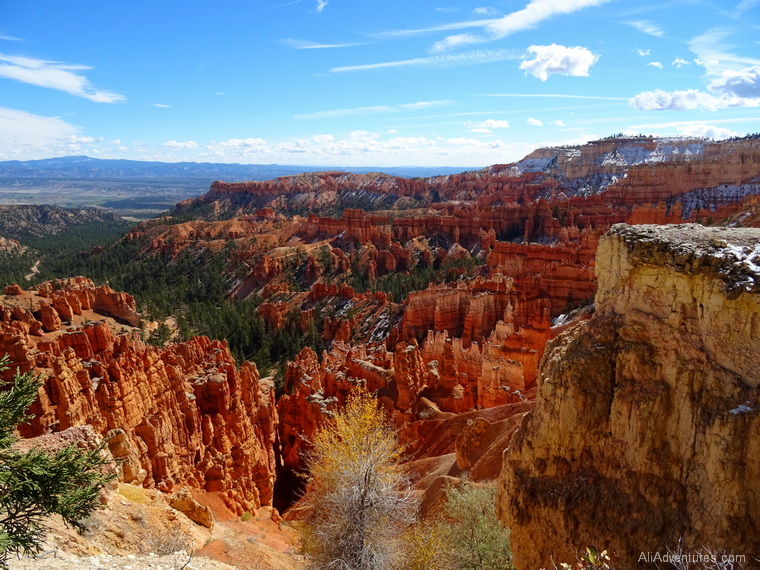 I decided I might be better off just staying at Zion, but last minute hotels were insanely expensive. (The hotel I had booked in Bryce was through email with no sort of deposit or credit card.) So I ended up driving around and seeing as much of Zion as I could before the sun went down about an hour or so after I arrived, and then I turned around and went back to Vegas. 2007 Ali was not a good traveler.

When Andy and I started planning this road trip, Bryce Canyon was a must for me. It felt like unfinished business. 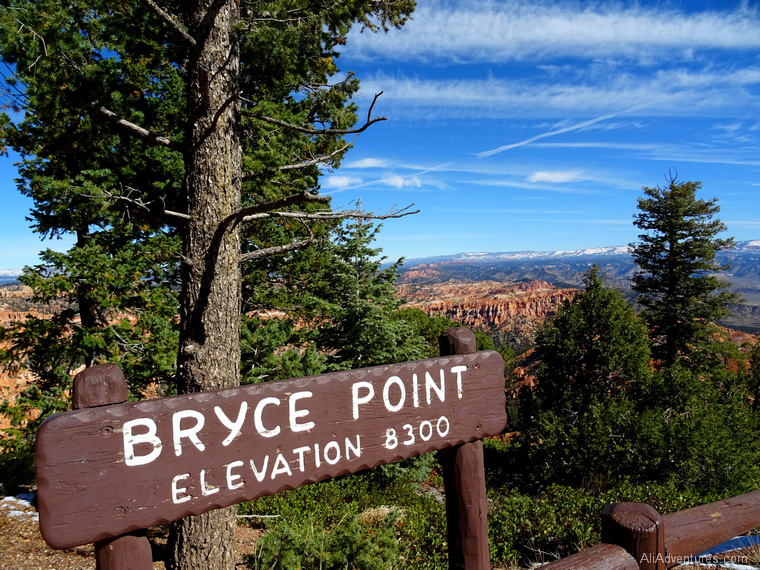 So many of the parks we visited are at high elevations. I think Bryce Canyon was the winner though. Andy and I researched hiking trails ahead of time and found a few that sounded interesting and not too difficult. We even found some great-looking hikes through some of Utah’s best slot canyons.

But that all went out the window when we arrived. I never took into account the elevation and the effect that would have on me. One of the popular lookout points is 8,300 feet, and another is 9,115 feet. I could definitely feel it.

Instead of any real hiking, we decided to walk along the reasonably flat paths that follow the edges of the canyon. The views were still amazing, and I was only sort of out of breath.

The other issue with Bryce Canyon being so high was the temperature. We knew it would be cold and never planned on camping, but it turned out to be even colder than the normal averages for that time of year. It actually snowed the night before we visited the park, so it was definitely chilly! The snow did make for some pretty scenery in the canyon though. 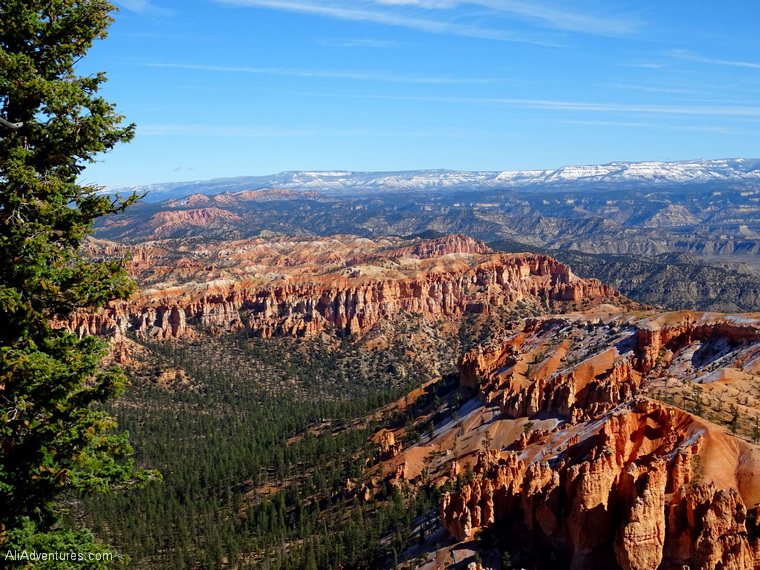 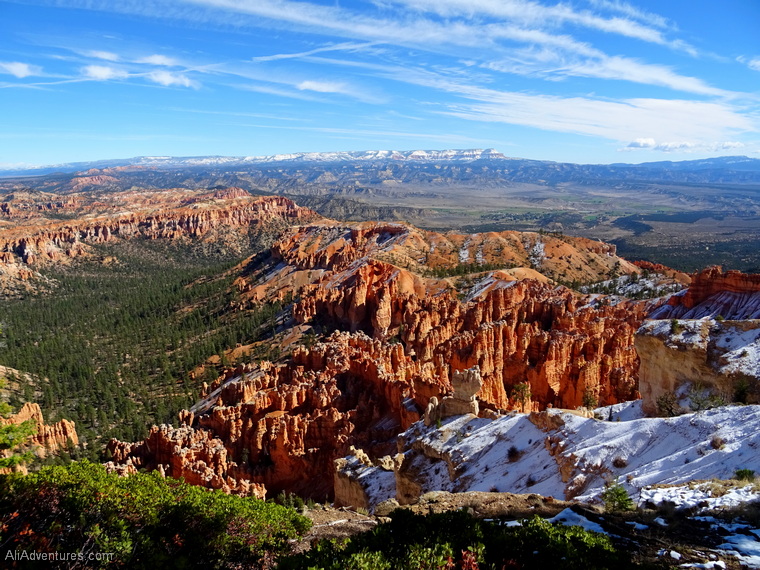 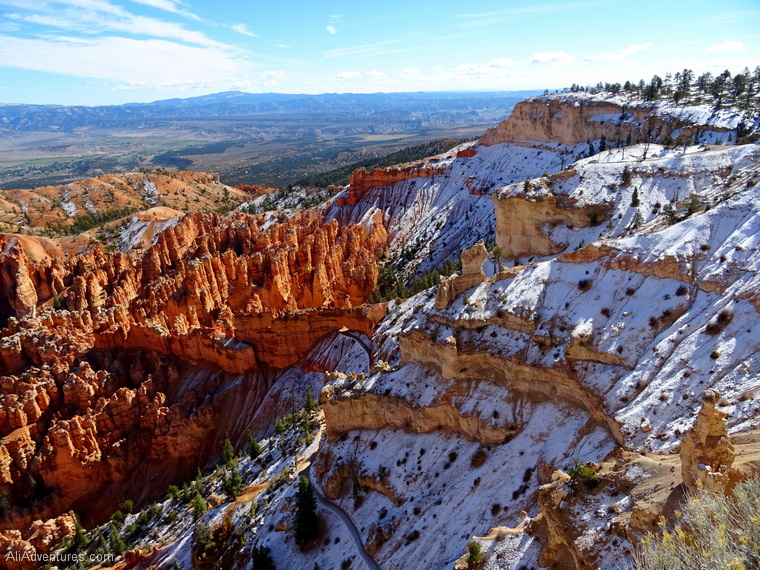 Bryce Canyon is one of the most popular parks in the country, but there isn’t a lot parking at the different viewpoints.

We parked at the visitors center and went in for a map and info, and we were encouraged to park across the street and take the shuttle around instead. Since the buses worked out really well at the Grand Canyon, we figured it would be a good option here too.

Bryce Point was our first stop, and that’s all it took to convince me we made the right choice. The parking lot was not very big, and it was completely full.

After checking out the views, we waited at the bus stop and watched as cars drove in, couldn’t find a spot, and desperately waited or tried to park illegally, despite signs and park employees deterring them.

Also like the Grand Canyon, there were certain shuttle stops where you could get out and walk the trail until you got to the next stop. We did this in a few spots to see different sections of the canyon. 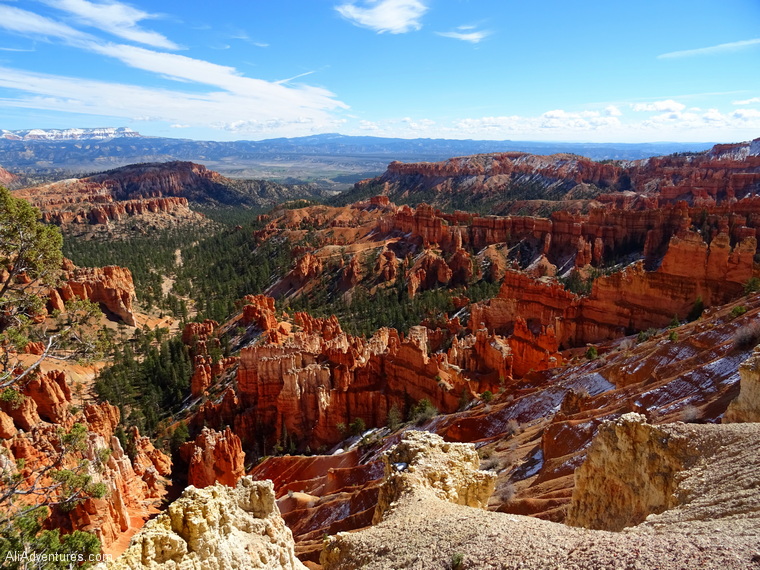 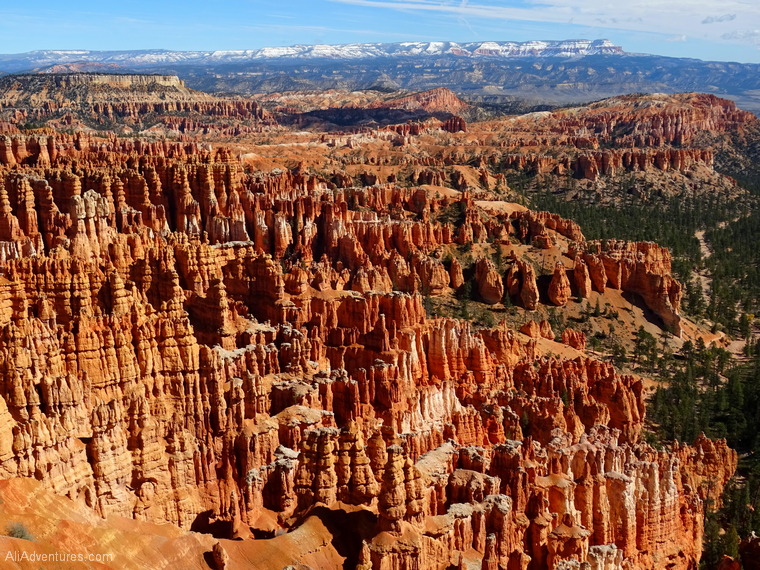 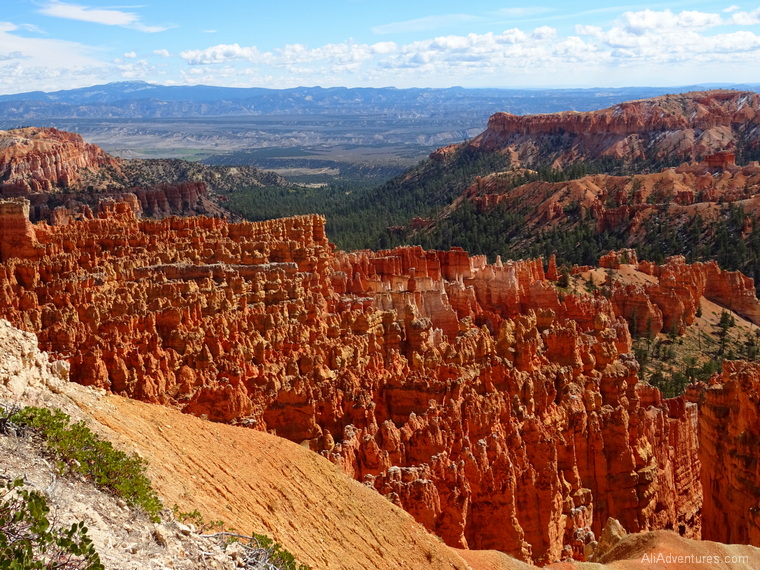 There is one scenic route that goes out from the main part of the park that is not reachable by bus. Towards the end of the day, we got back to the van and drove out to Rainbow Point and stopped a bunch of times along the way. The parking lots and pullouts along this route seemed sufficient, and we never had a problem parking. 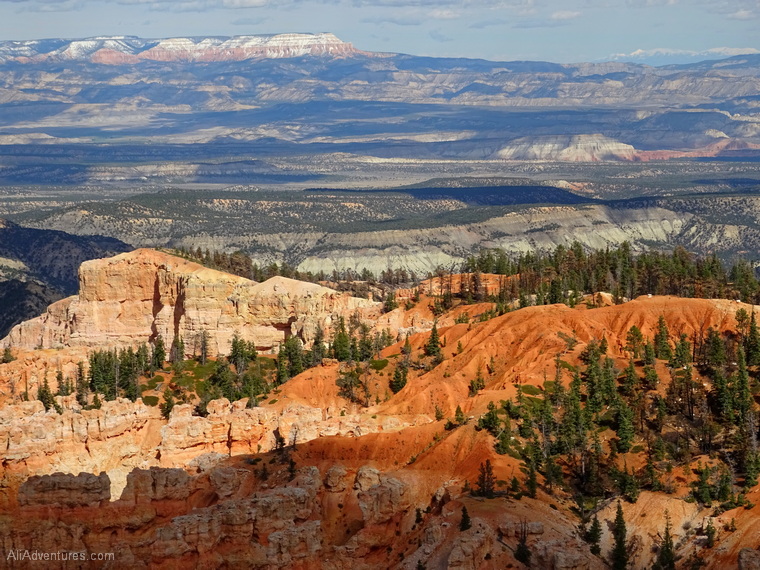 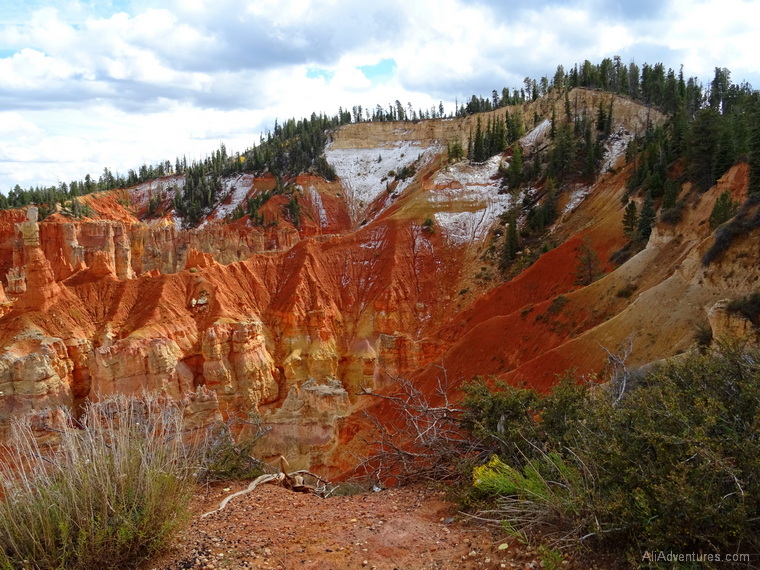 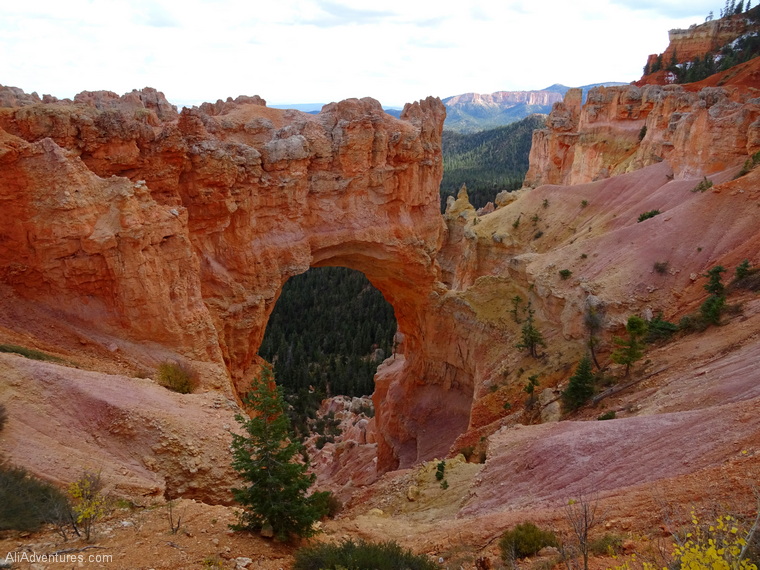 Where to stay at Bryce Canyon National Park

We booked a hotel in the nearby town of Tropic since we knew it would be too cold to camp in a van. Topic is a small town, but there were a few hotels and gas stations, plus a couple small restaurants and a grocery store. It was enough to keep us going for 2 nights and 1 day at Bryce Canyon.

Andy and I stayed at Americas Best Value Inn and it was a pretty good hotel. The room was comfortable, and it had a mini fridge and a microwave. The microwave was great when we decided to make our own dinner on our second night. Breakfast was included, which was mostly cereal, bread, pancakes, and a few other things. The staff were really friendly and helpful, and it was a short drive to the park.

I’d stay there again if we were to go back to Bryce Canyon. You just have to be prepared to be underwhelmed by the food in the area. Check out Andy’s post for info about food options in Bryce Canyon and Tropic, UT. 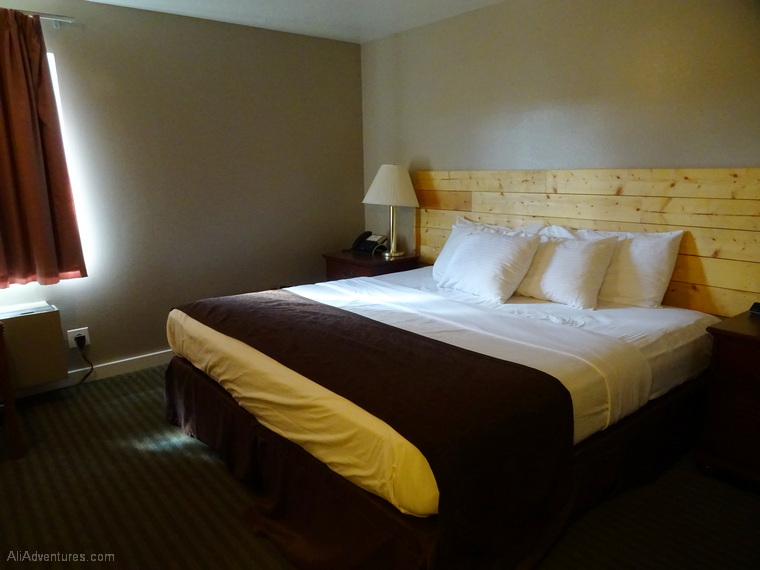 The normal entrance fee for Bryce Canyon National Park is $35. If this is the only park you’re visiting on your trip, and if you don’t plan on going to more than two national parks all year, it’s fine to simply pay the fee. But if you’re going to multiple parks, it is well worth buying a national park pass.

I’m glad I finally got to see Bryce Canyon National Park. It wasn’t my favorite park of the road trip – there was a lot of competition for that reward – but it was really gorgeous and well worth seeing. This is definitely one to add to a Utah national parks itinerary or as a side trip from Las Vegas. 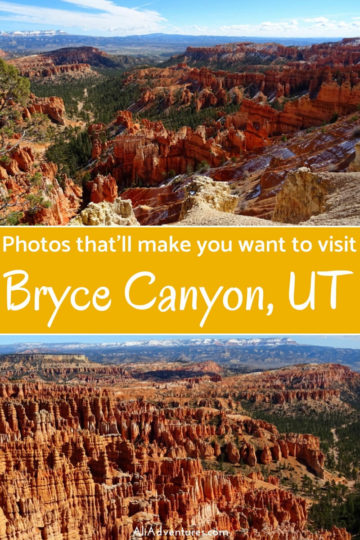