Other than a marching band trip to Los Angeles when I was 14 and a long weekend in San Francisco in 2010, I hadn’t spent much time in California, so I was looking forward to seeing a few of its most famous national parks. Andy and I had rented a Jucy Van, so we were venturing into the unknown – camping! We’d each done a little camping before this trip, but nothing this extensive. Here’s how we spent 2 days in Yosemite National Park, the first stop on our Southwest US road trip itinerary.

We had 3 nights/2 days in Yosemite, and even though we paid extra to pick up our campervan in the morning, we still arrived much later than we wanted to. After getting the van, we had to buy groceries and supplies and eat lunch, which all took a few hours. Then the drive took much longer than the almighty Google told us it would because Google Maps doesn’t always take into account the steep and windy roads.

So despite our desire to never arrive in the dark, we broke our rule on the very first day. I really did not like driving on those steep, curvy roads in the dark, especially in a vehicle I wasn’t familiar with. For the rest of our trip, we never let this happen again.

Arriving late also meant not really seeing what our campground looked like until the next morning. We were already a bit nervous about sleeping in the van for the first time, and it would’ve helped to have some time to get situated and settle in with some daylight.

But it was nice to see this the next morning. 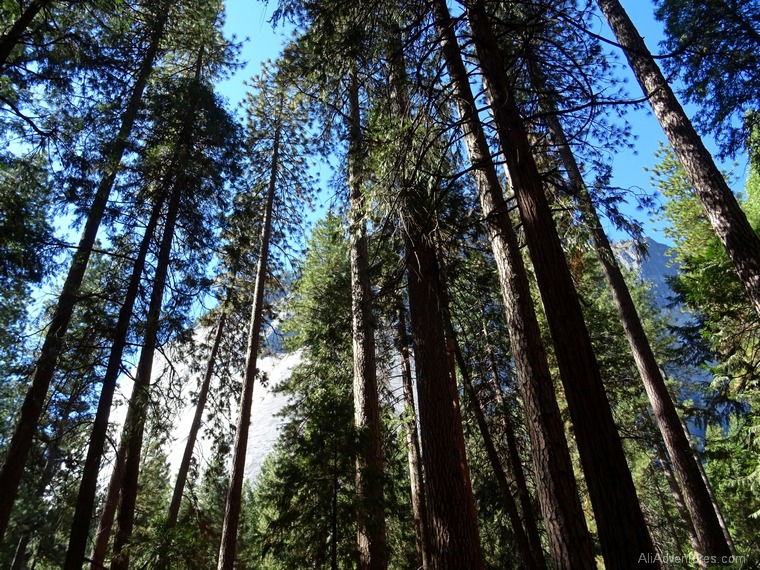 Before we left for our trip, Andy and I did some research about hiking trails in the national parks we were going to visit. Neither of us is in great shape, so anything labeled “difficult” or “strenuous” was off the table. We made note of some easy hikes and even a few moderate ones to try along the way. And if it involved a waterfall and didn’t sound too hard, all was all for it.

The Vernal Falls trail was labeled as moderate, and we decided to give it a try. This trail eventually leads to Half Dome, but the beginning is quite popular with casual hikers. It turned out to be a really steep, constantly uphill hike, and even though it was a paved path, I found it extremely difficult.

I stopped so often to catch my breath, and after awhile it felt like I could only go a few steps without needing to stop again. Meanwhile people who looked more out of shape than me stomped onward. Eventually I called it quits. It was miserable, I hadn’t slept well, and it just didn’t seem worth the tears. 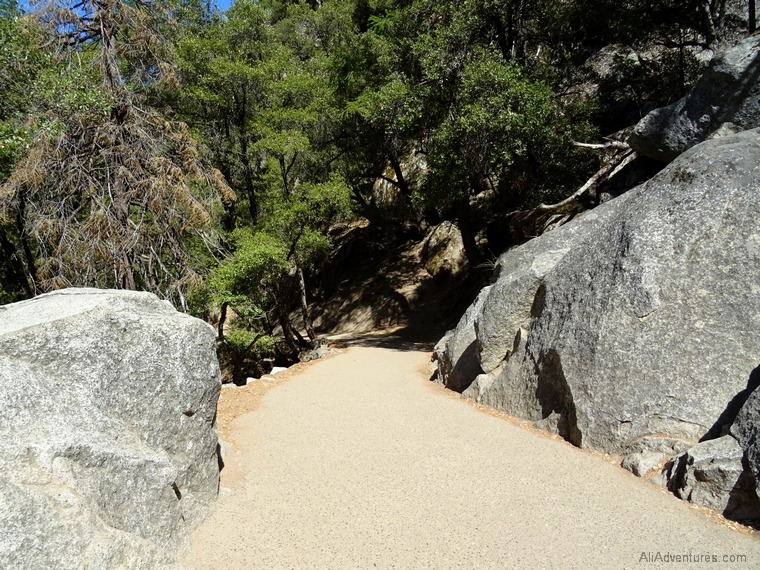 Unfortunately we only had our campsite for one night. Yosemite is one of those parks that books up months in advance, within hours of the reservations opening. So we were able to grab a Thursday night at a campsite near the main part of the park, but for Friday and Saturday nights we had to move to another campground about 40 minutes away. But before that, we had to shower…because there were no showers out near the new campground.

We didn’t get to do as much exploring as we had hoped that first day due to the logistics of showering and moving campgrounds and simply figuring out how everything worked. If you don’t have to move, you can probably do a few more hikes.

Check out our Ultimate Guide to Planning a Campervan Road Trip in the Southwestern USA. 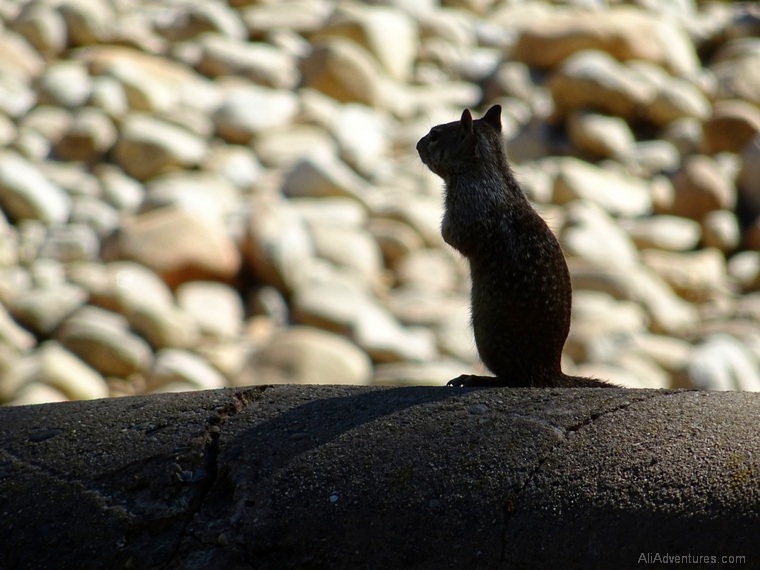 Waterfalls and Half Dome

The next day worked out a little better, despite being farther from the main part of Yosemite National Park. We stopped at a few lookout points along our drive in order to take pictures and get a glimpse of Half Dome. One of the stops was Tunnel View, which is one of the most popular places for pictures, and you could tell by all the big bus tours stopped there. 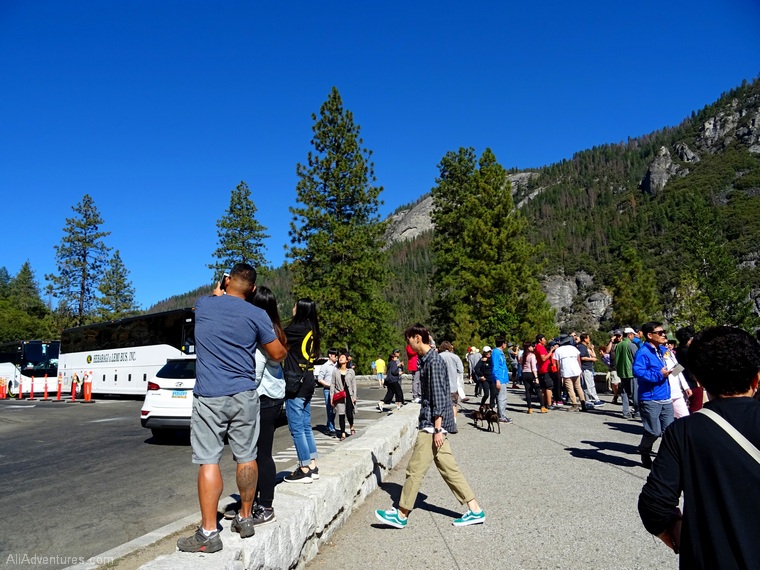 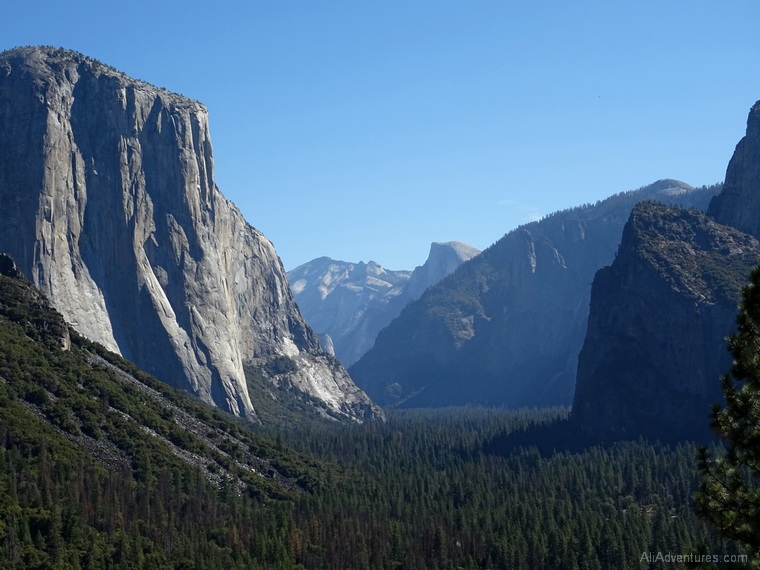 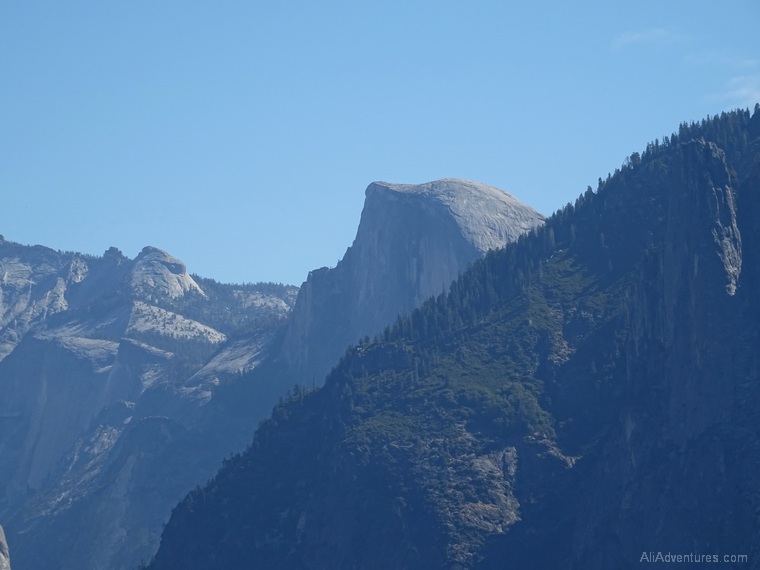 Next up we went searching for waterfalls since Vernal Falls didn’t work out for us the day before. Bridal Falls is a much easier one to get to, even easier than I really needed it to be because really you just walk a few minutes from the parking lot, and you’re there. Apparently there’s normally much more water coming down, but fall isn’t the best time for water flow. 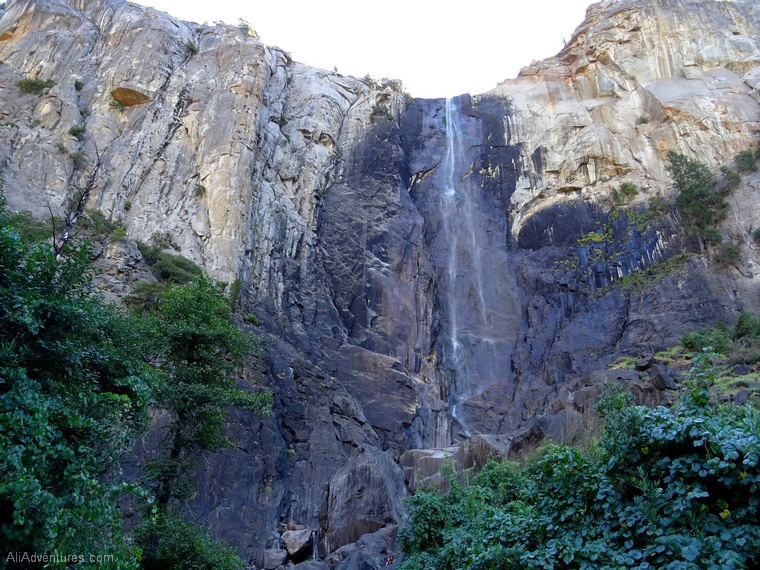 Yosemite Falls was nearby, and since it’s the tallest waterfall in North America, it’s worth checking out. Unfortunately the water flow issue was even more of a problem there, and we saw no water. But take a look, maybe you can imagine the water cascading down the rocks. 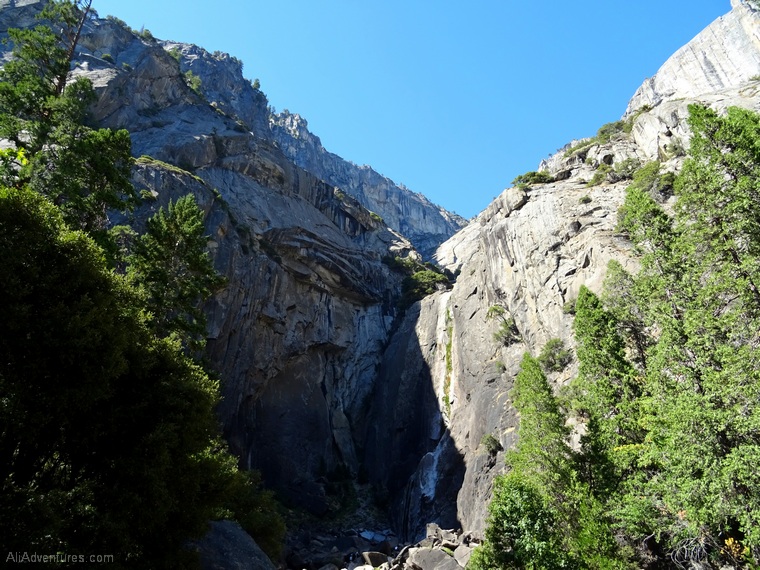 One day in Yosemite

It’s a long drive from almost anywhere, but if you only have one day in Yosemite National Park, I’d recommend spending your time in Yosemite Valley. This is the main section of the park where the visitor center is, and you can easily get to several easy hikes and view points. There’s also a free park bus that will take you to other sections so you don’t have to keep moving your car and looking for parking.

For one day in Yosemite, make a stop at Tunnel View on your way into the park to see Half Dome. Try Yosemite Falls and Bridal Veil Falls since they are both easy and short hikes. Mirror Lake is another easy, reasonably flat hike worth checking out. If you’re in better physical shape than me, try hiking to Vernal Falls.

I’d recommend getting to the park late in the day (but hopefully while it’s still light out) and spending the night, so you can wake up the next day to have your full day in Yosemite. 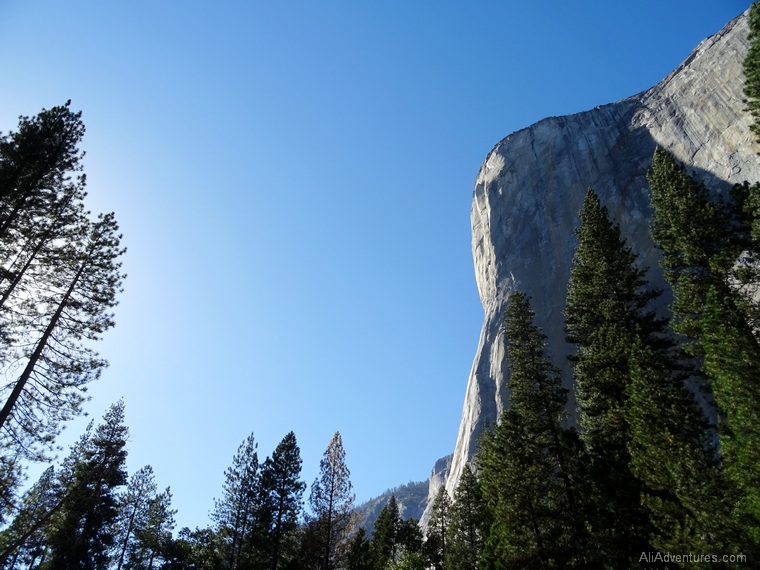 Best place to camp in Yosemite

There are several different campgrounds within the national park, so picking the best place to camp in Yosemite depends on what you want. We spent one night in Yosemite Valley in the Upper Pines campground and two nights at the Crane Flat campground, which was about a 35-40 minute drive from the valley.

I liked Upper Pines because it was close to lots of trails and waterfalls we wanted to see. It was an easy walk to some of them, or we could hop on the free bus to get a little farther. Having relatively easy access to the visitor center and the shower facilities was also a big plus.

Crane Flat was more remote. There were no lights in the bathrooms, which means having to wear a headlamp to go to the bathroom at night. This campground also didn’t have any showers or other facilities nearby. Crane Flat is probably better for slightly more adventurous campers who want to hike the not-so-popular trails and aren’t interested in the more touristy bits.

Planning a trip to Yosemite

There’s a lot to consider when planning a trip to Yosemite. The time of year will affect which sections are open, if there’s water in the waterfalls, how many other people you will encounter, weather conditions, and more. Start researching well ahead of time!

If you plan on camping in Yosemite, especially in the Yosemite Valley campgrounds, you need to book months in advance. The reservation windows (as well as loads of other great info) are posted on the national park website, and prime campgrounds book up within hours. We got onto the website just a few days after the window for September had opened, and we were only able to get one night, a Thursday, at Upper Pines. Nothing else was available for Friday or Saturday nights, which is why we ended up at Crane Flat.

Read through the national park website and decide which parts of Yosemite interest you. There’s info about hiking trails and other attractions, so you can decide how much you want to see and decide how much time you need. Remember that if you’re camping, you’ll lose some time to showers, making food, etc. which always seemed to eat up more time than when we stayed at hotels.

We had 3 nights/2 days in Yosemite, and while I felt like that was enough for us, it’s a huge park and we only scratched the surface.

Unless you live near Yosemite, you’ll need to allow for plenty for driving to the park. It took us about 5 hours to drive to Yosemite from Oakland, where we picked up our van. Driving out of the park to King’s Canyon, the next stop on our national parks road trip, took somewhere around 6 hours, not including stops for gas, food, supplies, and photo ops. Google Maps consistently told us less time than it actually took us to drive from one place to the next.

Read our tips for choosing campgrounds and where to stay on your western US road trip.

The normal entrance fee for Yosemite National park is $35. If that’s the only park you’re visiting on your trip, and if you don’t plan on going to more than two national parks all year, it’s fine to simply pay the fee. But if you’re going to multiple parks, it is well worth buying a national park pass.

The America the Beautiful pass costs $80 and is valid for one year. It covers admission for the pass holder plus anyone else in the car. Originally we were going to buy ours at Yosemite since it was our first park, but while shopping for a few things at REI, the cashier mentioned they sell the national park passes. That made things so much easier, and it turned out to be a good choice because on one was at the pay hut when we arrived at Yosemite in the dark. 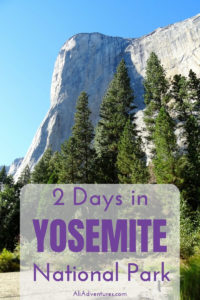