2 Days in Las Vegas: Plus Valley of Fire State Park

Las Vegas makes a good starting and ending point for a road trip to national and Navajo parks in Arizona and Utah, and it helps that my best friend lives there. So after our short visit to Zion National Park, we began our drive to Vegas, where we spent a few days on the strip before our flight back to Berlin. Here’s a look at our time in Las Vegas, plus Valley of Fire State Park and a few other oddities and attractions near Las Vegas.

Andy and I aren’t really big on gambling, but he had never been to Las Vegas before, so he wanted to see it. With just 2 days in Vegas, or a bit less after returning the campervan, we tried to squeeze in as much as possible. We were staying at the Luxor, and from there we basically wandered down the strip and checked out a few of the famous casinos along the way.

New York, New York. The Parisian. Caesar’s Palace. The Venetian. The fountains at the Bellagio. They’re all really impressive, though way over the top and a bit cheesy.

And even though the strip isn’t soooo long, it’s impossible to walk down the road in a straight line. Most intersections aren’t set up for pedestrians, probably because they don’t want accidents. This means every time we got to another intersection and wanted to cross the street, we had to walk through a building or up a bunch of stairs to some kind of pedestrian bridge and back down again on the other side. It probably took 10 minutes or so for each one, which maybe doesn’t seem like a lot of time, but we’re talking about 10 minutes to get across a street.

So while you can walk down the strip, just remember it will take a lot longer than you think it will. We walked for several hours (in the heat!) including going into a few casinos, and by the end of it we were exhausted. And we really only made it from the Luxor to about the halfway point of the strip. There’s a monorail, but it’s not actually too convenient.

We also played some slot machines both nights we were at the Luxor and drank too much the first night. But that was about as wild as things got for us in Vegas.

I think I was a little sad about our road trip ending, so on the way back to Vegas, I insisted we detour to Valley of Fire State Park, which is a little north of Las Vegas. After a week or so of colder temperatures, the Nevada heat was a bit much for us. We mostly stuck to easy viewpoints and pullouts that didn’t require much hiking. There was also a spot on the rocks with some petroglyphs that are accessible by climbing up a staircase.

It seemed like a cool park, and definitely something interesting to do near Vegas if you want to get out into nature.

Valley of Fire is also really close to Lake Mead, and we drove through to continue on our way to Vegas. The road hugs the lake for some parts, and we got a few photos, but we were beyond done at this point. 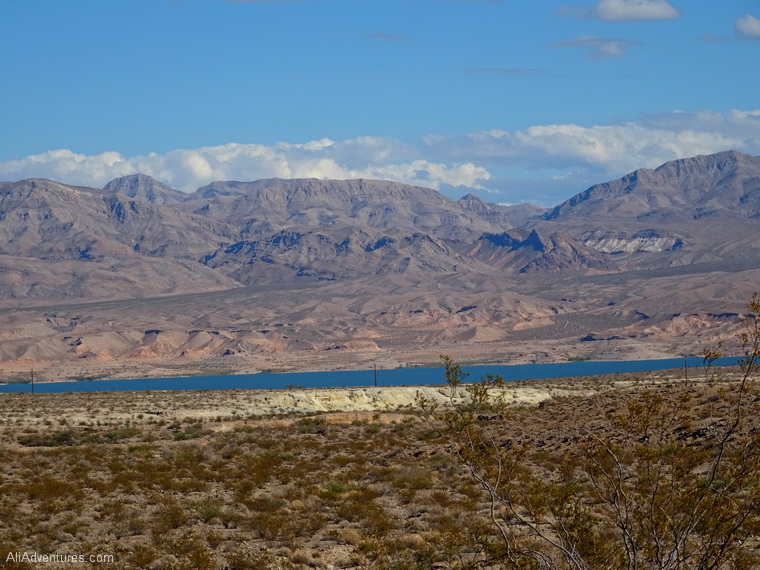 The tallest thermometer in the world

About an hour and a half from Las Vegas is a town called Baker, CA. We drove through there on our way to Vegas the first time, when we drove the long way from Death Valley. Why did we go through this tiny, never-heard-of-it town? Well, we needed gas, and Andy was looking on the map for a decent place to stop, and he came across the town of Baker. And it turns out Baker is home to the tallest thermometer in the world.

I love cheesy things, and I’ve never really done a road trip where I’ve had the chance to see these kinds of roadside attractions. So Baker, CA was our pit stop for gas, and luckily the thermometer was easy to find.

Another cheesy-sounding attraction I had read about was Seven Magic Mountains, located about a half hour south of Vegas. It’s an art installation, supposedly temporary, but its time has already been extended. It’s a bunch of tall neon rock-like pillars in the middle of the desert just a mile or two off I15. 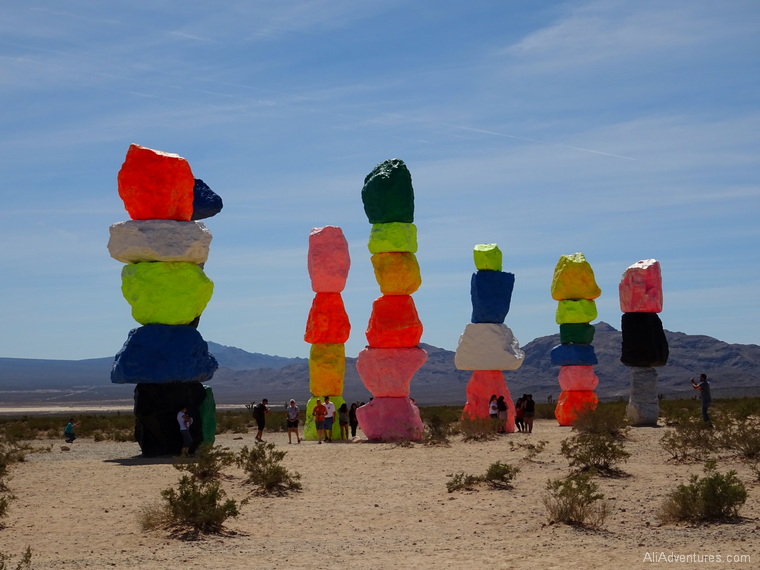 I had no desire to see the Hoover Dam. I’m sure it’s impressive, but it’s a dam. Giant thermometer? Yes please. But a boring-looking yet amazing feat of engineering? Meh. Plus it’s super crowded and it would’ve taken hours out of our day to see it as we left Vegas to drive to the Grand Canyon.

But as we were driving towards the Nevada/Arizona state border, battling so much wind I thought our van might blow off the road, we saw a sign for a scenic overlook and decided to check it out.

It’s worth noting that you can NOT see the Hoover Dam from this scenic overlook. You can’t see it from the highway at all. I’m sure they designed the highway that way on purpose to avoid people leering while driving and causing accidents. But the view is pretty, if you can ignore the big rigs on the highway.

Check out how to plan the best southwest USA road trip itinerary. 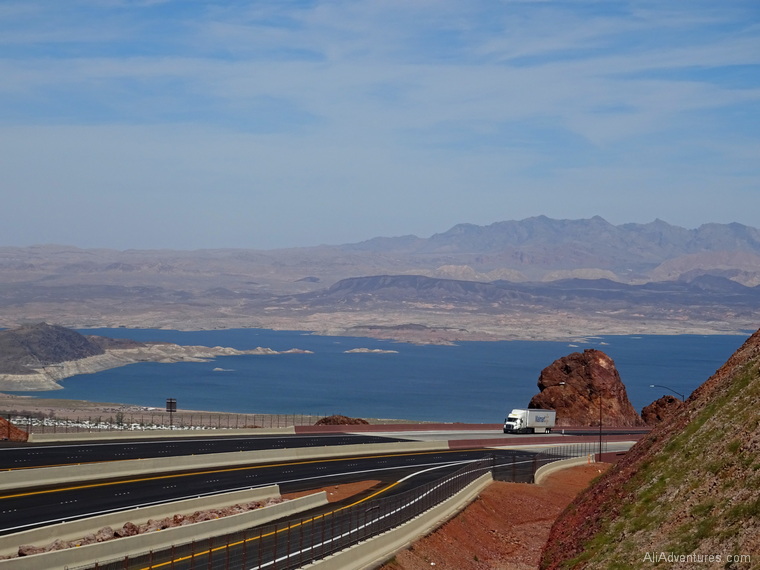 Where to stay in Las Vegas

There are so many hotels in Las Vegas, it’s hard to choose. If you have your heart set on a specific casino, go for it. But we weren’t too particular and mainly wanted to not spend hundreds of dollars per night.

We ended up finding a good deal at the Luxor, and our room was pretty comfortable. Andy wanted to stay in the pyramid section, but there is a newer part that’s not in the pyramid. There are a few restaurants in the casino, though we only grabbed a quick dinner at a sandwich and salad place.

Like most (if not all) casinos, smoking is allowed on the casino floor. And you have to walk through the casino to get in and out of the hotel. I really hated that part, but I think most places are like this, so it’s not easy to avoid.

Overall, this was a nice hotel, and I’d consider staying at the Luxor again if I ever go back to Vegas. 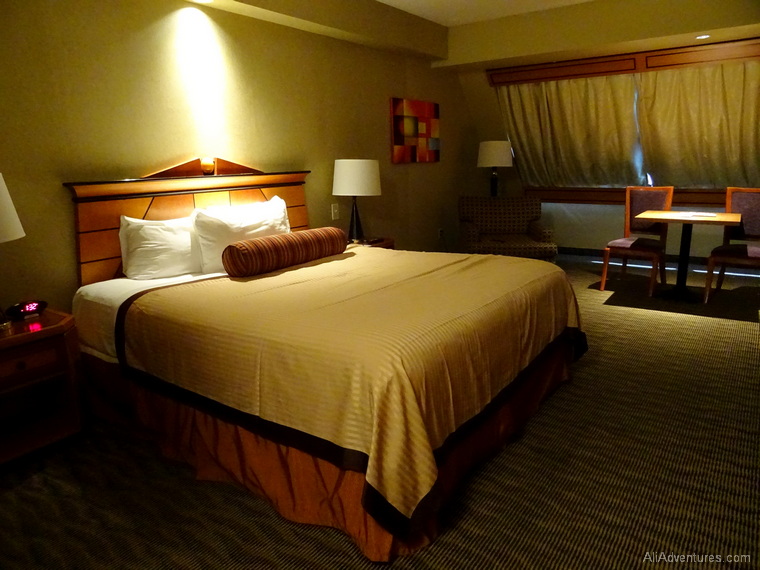 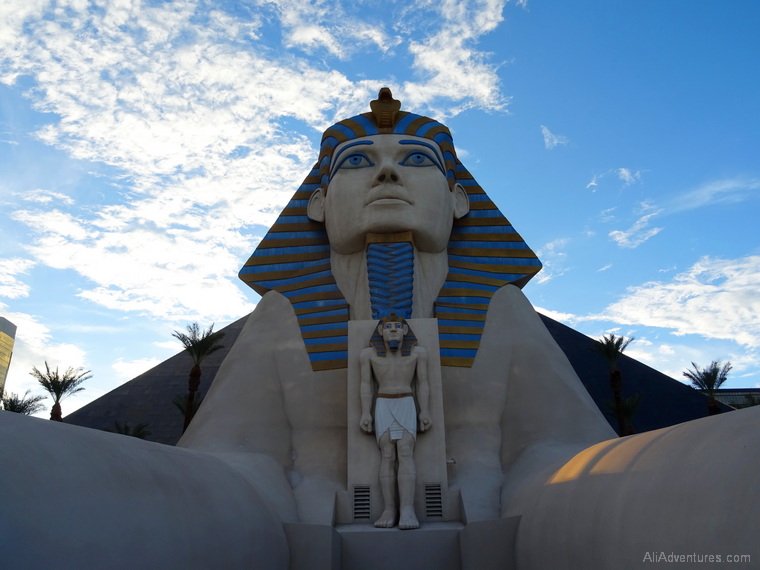