Is Switzerland Expensive to Visit?

The totals are listed in US dollars, euros, and Swiss francs (CHF). The US dollar and Swiss franc were almost equal when I visited. This does not include my round trip flight from Berlin to Zurich.

Even though I was traveling with a friend, I’m showing the total cost of the hotels where we stayed in Bern and Interlaken. I normally consider myself a mid-range traveler, staying in nice but not super luxurious hotels. But for this trip, the hotels were so expensive, I went for places that were a little more basic than I’d normally book.

Where to stay in Bern, Switzerland

You might not have even heard of Bern, but it’s the capital of Switzerland. But it’s a small city with a cute old town, and there are lots of things to do in Bern. It’s worth staying as close to the old town as you can, but if you’re don’t want to stay in a hostel and you don’t want to spend hundreds per night, look just outside the old town instead.

We stayed at the Hotel La Pergola a few blocks from the train station and old town. It was a decent place, but nothing special. The bathroom was tiny, but the beds were comfortable.

Most hotels in Switzerland don’t have air conditioning because it rarely gets hot enough, so just be aware that if you’re there during a heat wave like we were, your only relief is a fan and opening the window once the sun goes down. The hotel was giving out free bottles of water and free ice cream though, which was a nice gesture.

Read reviews on TripAdvisor here or book a room at Booking.com here.

Where to stay in Interlaken, Switzerland

Interlaken is a small town in the Swiss Alps, and it’s the hub of outdoor activities in the area. Even though it’s small, it’s one of the biggest towns around, which makes it a great place to base yourself to explore the Bernese Oberland region. It’s where you’ll find most hotels and restaurants, and lots of trains go through here.

The Interlaken Ost (East) and West train stations are about a mile apart, which means you can easily walk from one to the other in about 20 minutes or so. You should look for a hotel or hostel somewhere in between the two train stations, or within a few minutes beyond either train station.

We stayed at the Hotel Lötschberg, and it was fantastic. Again, it was a little more basic than what I normally book, but it was a great choice. The room was a little more spacious than the one in Bern, the beds were comfortable, and the bathroom was still a bit small. But the staff here were super friendly and helpful.

Our booking also included breakfast, which I had low expectations for since free breakfast is usually not that great. But the breakfast here was wonderful. There was lots of hot food, including eggs, bacon, potatoes, and more. Plus fruit and veggies, meats and cheeses, cereal and bread, juice and coffee. We would often fill up on breakfast and have a lighter lunch because their breakfast was so good.

They also had a common room with a couple of tables and a kitchen area. We had access to the fridge, so we could store leftovers as long as we put our room number on it. We used the microwave a few times to reheat leftovers and save on food costs. And they had another fridge with drinks (alcoholic and non-alcoholic) that you could buy on the honor system by putting your money in a little piggy bank.

The hotel was located just a few minutes walking from Interlaken West in a quiet neighborhood. We could easily walk to restaurants and a grocery store. If you’re going to Interlaken, I highly recommend staying at the Hotel Lötschberg.

Read reviews on TripAdvisor here or book a room at Booking.com here.

I’m not sure if it’s Switzerland in general or just this region, but every hotel advertised that they provided a card for free public transport during your stay. We only used it once in Bern, but it came in handy in Interlaken since the free zone went out a ways. Having this card definitely saved us a few bucks here and there on transport in Switzerland.

My biggest transportation expense in Switzerland was for my train from Zurich to Bern, which cost me $50.25. I also paid about $21.87 to get from Interlaken back to the Zurich airport. It’s worth noting that Interlaken to Zurich is farther than Bern to Zurich, but the difference is in the type of ticket.

I didn’t know exactly when I’d want to get on the train from Zurich, since I spent some time in the city between my flight and going to Bern. So I bought a point to point ticket, which gives you flexibility to get on any train for that route on that day. But I knew when I needed to be back at the airport for my flight, so I booked a train ticket that bound me to a specific train, and it was a lot cheaper. These supersaver tickets are your best option for saving money in Switzerland on transport.

Other than those two train tickets, I also bought a few other train tickets for shorter routes, like getting from Bern to Interlaken and Interlaken to Lauterbrunnen. And we took a few local buses. Most were between $5-$10.

Switzerland food prices are high. You can save by avoiding nicer sitdown restaurants, but you’ll still pay more in Switzerland for food than you will in a lot of other places. My dinner at the Bern train station food court cost almost $15. Lunch at a reasonable Thai restaurant in Bern cost me almost $24. Andy and I can eat together for less than that in Berlin at a comparable place.

In Interlaken, we had dinner at a quickie Turkish doner place, and I spent almost $14. One day I went to the grocery store and bought a few things to eat back at the hotel to save money. But I spent over $32 on lunch at a delicious Indian restaurant and over $27 for a delicious dinner at a Thai place. I had one cider at the Thai place, and that was my only alcoholic drink of the entire trip.

So yeah, Switzerland food prices are high. My cost of food in Switzerland per day was $37.16. It helps to go to the grocery store and make your own meals when possible. And if you have access to a fridge, and better still a stove or microwave, you can save leftovers from bigger meals to make your money stretch a little further.

This region of Switzerland has a lot to offer, so how much you spend depends on your interests. We paid for a funicular, the entrance fee for Thun Castle, a scenic boat ride on Interlaken’s lakes (Lake Thun and Lake Brienz), and a chocolate workshop in Interlaken. We also went hiking in Lauterbrunnen, which was free except for the transportation.

But there’s so much more you can do! If you’re more adventurous, you could pay to go paragliding in Interlaken, which is very popular. There are also lots of castles in the area. You can find hiking trails throughout the region, ranging from easy to challenging. One thing we considered doing but skipped due to the price is go to Jungfraujoch, the top of Jungfrau Mountain for fantastic views of the Alps.

So you could easily spend hundred more traveling in Switzerland in this region if you wanted to do more things. Check out this Bernese Oberland itinerary for how to spend 5 days in Switzerland.

How expensive is Switzerland?

Unfortunately Switzerland is one of the more expensive countries to visit. I found hotel costs especially to be much higher than other parts of Europe, and food costs were rather high as well. Certainly there are ways to save money: rent an apartment so you have access to a kitchen, buy groceries, stay at a hostel, do cheap or free activities. But overall, expect to pay more in Switzerland than in neighboring countries.

Overall, for 6 days of travel, my Switzerland trip cost $291.65 per day. If you split the cost of the hotel per person, that lowers my total daily average to $185.57 per day. 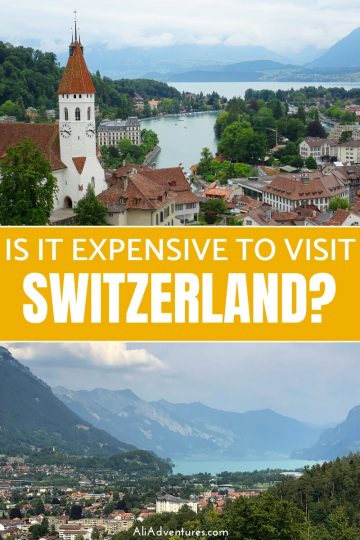 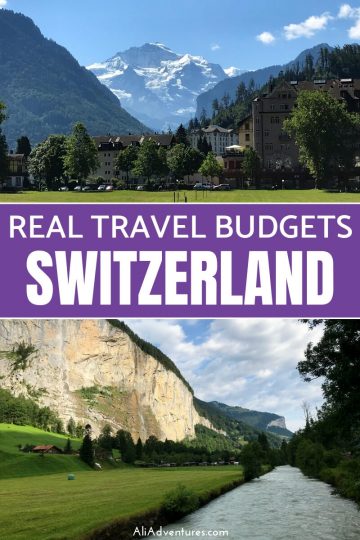 Sign Up
How Much Does it Cost to Travel to Japan? How Much I Spent in Riga, Latvia