Death Valley National Park is the hottest, dries, and lowest US national park, and the idea of it has always fascinated me. It was high on my list, and luckily it’s not too far from Las Vegas, where my best friend lives, so it was an easy park to add onto our western US road trip itinerary. Here’s how we spent 2 nights and 1 day in Death Valley National Park, plus how we should’ve done things a bit differently.

What to see in Death Valley National Park

Death Valley might sound pretty boring. It’s dry and hot and not much survives out there. But there is actually a lot to see in Death Valley, and each section is unique. Just remember the distances are farther than you might think, so map things out ahead of time and give yourself plenty of time.

Sand dunes are something I always imagine when I think of Morocco and other countries in northern Africa within the Sahara Desert. But sand dunes in California? Well, you’ll find them in Death Valley.

Just a little east of the Stovepipe Wells area is the Mesquite Flat Sand Dunes. Park in the parking lot and have a look, but don’t walk out too far because it is HOT. Distances and sizes are deceiving, and it’s not recommended to go all the way out to the dunes themselves. Apparently people have gotten lost out there, and you could die in the heat.

You can see the sand dunes and enjoy them from just a few steps away from the parking lot. 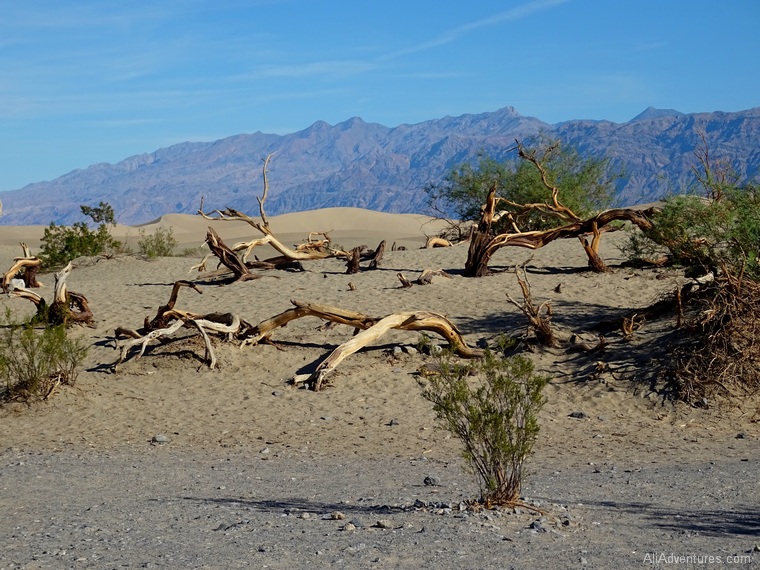 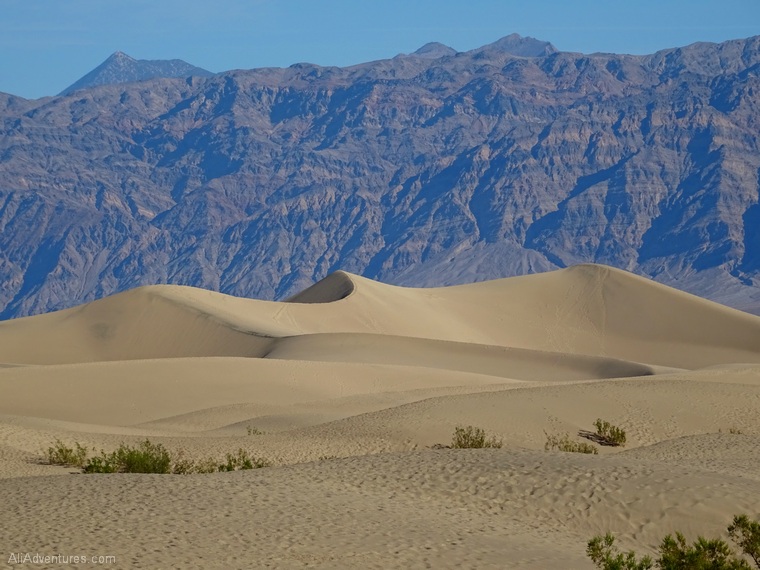 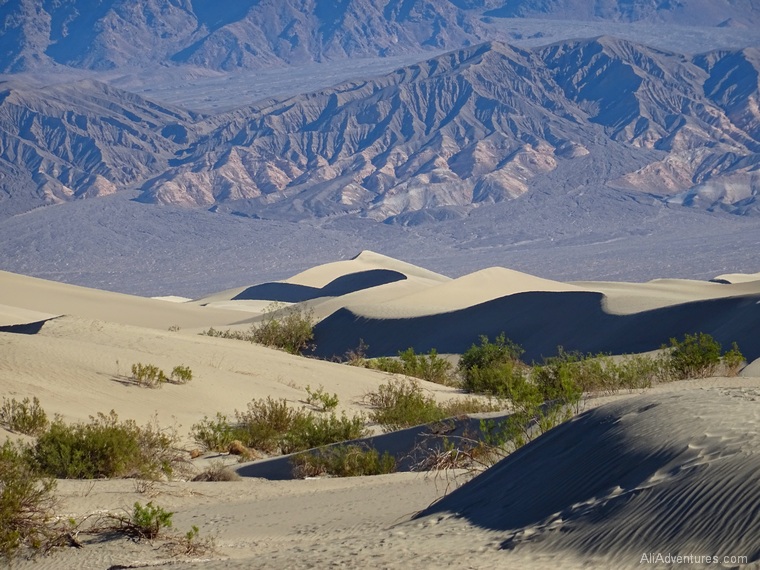 Badwater Basin is the lowest point in the park and the lowest point in the USA. Again, park your car and walk a little ways out to see the area, but don’t go too far. We saw people walk so far out into the salt flats that they looked like tiny specks, but with such high temperatures and such harsh sun, I wouldn’t want to be out there for too long. There were even signs warning people against walking too far after 10am.

I also liked that sea level was labeled on the cliff across the street from the parking lot. Since Badwater Basin sits at 282 feet below sea level, the difference is quite significant.

After seeing the sand dunes and Badwater Basin, we drove the 9 mile stretch of one-way road known as Artist’s Road. This is where you’ll see the Artist’s Palette and other hills and rock formations, some of which are fascinating and unexpected colors.

I loved driving through this section, but it’s a windy, curvy road, so don’t drive too fast. There are several pullouts and parking areas to stop for photos. 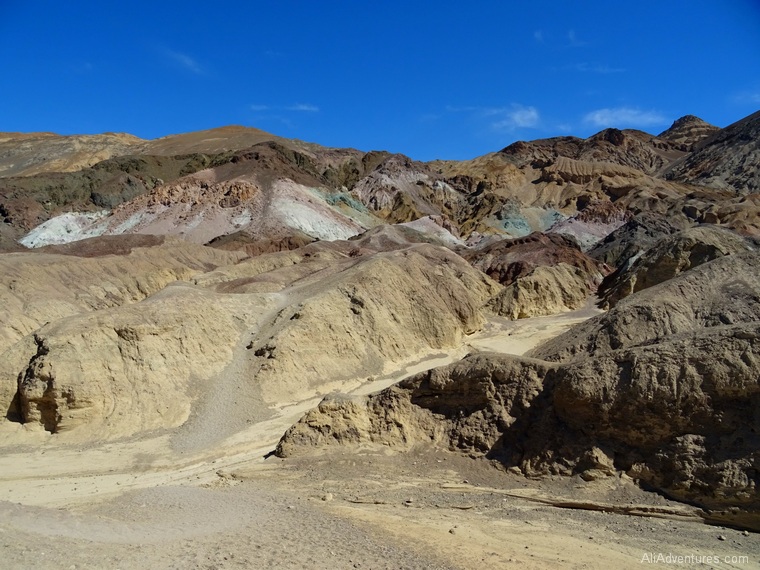 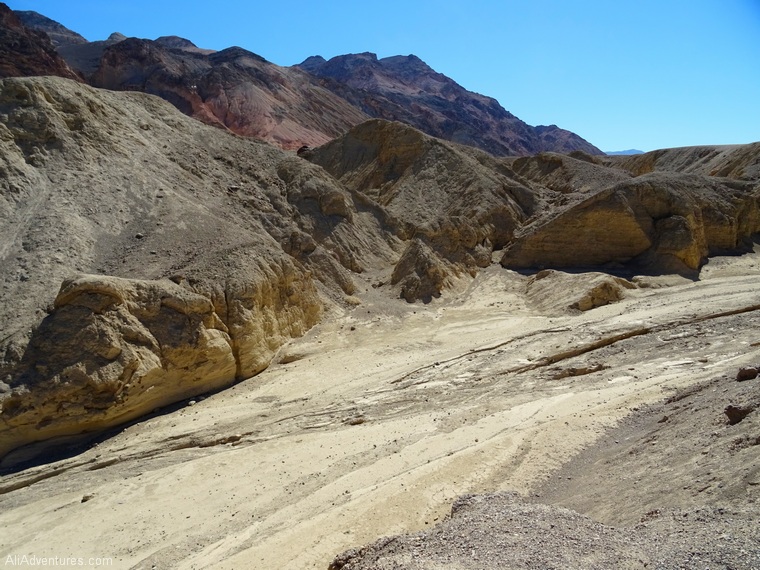 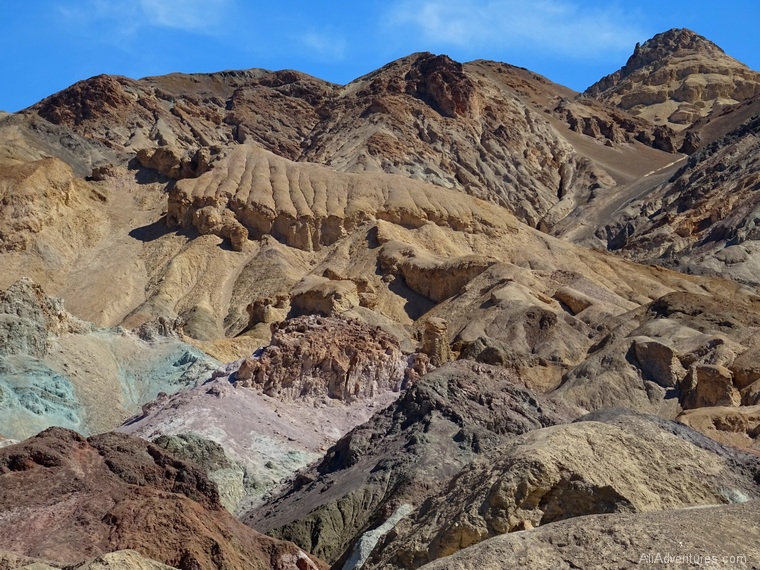 Stay hydrated! Death Valley is extremely hot and dry, and you’ll need lots more water than you think. We went through several liters of water each, plus some lemonade we purchased at a gas station.

It goes without saying that in this kind of heat, you need to protect yourself. Aside from having plenty of water, bring lots of sunscreen, a hat, sunglasses, and one of those windshield visor things for your car.

We visited Death Valley in late September, but we would’ve been better off going a bit later in the year when temperatures are a little more tolerable. Death Valley is a great place to visit in the US in November or even in the winter.

We didn’t find a lot of food options within the park. There’s a gas station at Stovepipe Wells (which had much cheaper gas than at Furnace Creek near the visitor center or near our campground at Panamint Springs) which has plenty of drinks and snacks that you would typically find at a gas station. The visitor center had a few sad looking pre-made sandwiches for sale but they also had signs near all their seats prohibiting you from eating there. We ended up eating PB&J out of our van in the parking lot.

Death Valley has lots of interesting sections to explore, but be aware of the heat and how much you (and your car!) can handle in one day. If you can spare a few days to explore the park, do as much sightseeing as you can very early in the day and maybe a little late in the day, but rest in a shady, hopefully air conditioned spot during the hot midday hours. It’s a huge park and the distances are farther than you might imagine.

Some scenes from Star Wars: A New Hope were filmed in Death Valley National Park. It was the setting for Tatooine, and you can see many of the filming locations for yourself, including Artist’s Palette. Check out a full listing here.

What we’d do differently

While I loved our time in Death Valley, there are a few things I’d do differently if I could do it all over again.

I didn’t want to move too quickly, so we decided to spend two nights in Death Valley. The original idea was to see the dunes, Badwater Basin, and artist’s palette on day one, and then see Dante’s Peak on day two as we drove out of the park. (Dante’s Peak is a much higher elevation where you can sometimes see both Badwater Basin and Mt. Whitney at the same time.)

But really, we could’ve done all that in one day. We should’ve spent that first night at the campground, done our sightseeing the way we did it, and then after lunch, we should’ve kept driving east to see Dante’s Peak, and then continued on to Vegas.

Instead we headed back to our campground early afternoon. The roads were very steep up and down, and between that and the heat, our brakes were acting funny. They worked but felt really shaky, and it made us nervous.

So we didn’t make it to Dante’s Peak. Driving back through the park the next day felt like too much to endure (though in hindsight, I’m sure it would’ve been fine) so we chose the much longer route all the way around the park along the highways to the south.

One night in Death Valley would’ve been plenty for us, and it would’ve meant coming in from the west and exiting to the east. But sometimes you have to be flexible on a road trip.

Read our Ultimate Guide to Planning a Campervan Road Trip in the Southwestern USA. 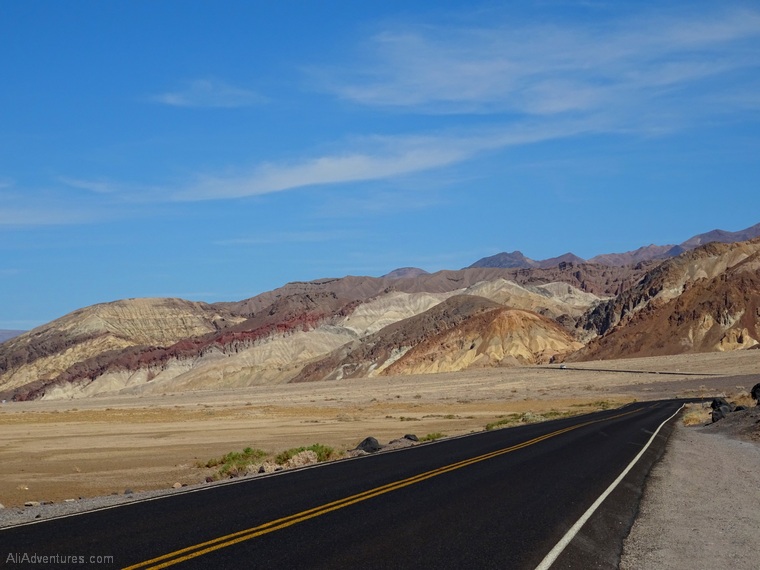 So even though I think we would’ve been better off with only one night in Death Valley, I am glad we had two nights at the Panamint Springs campground. It was located just on the western edge of the park, which meant a longer drive into the park the next morning. But it was also an elevation of 1000 feet, which meant it was roughly 10 degrees cooler than at the visitor center or the park’s campgrounds.

At night, the temperature was perfect. It was warm but not stifling. There was a nice breeze that blew through the mesh panels of our van popup sleeping area, and it was some of the best sleep we had on our whole trip.

Since it’s such a desolate location, there was almost no light pollution. After the sun went down, we sat in our camping chairs and stared at the sky, admiring the millions of stars. It was the first time I had ever seen the Milky Way, and it was so beautiful, I cried. Words can’t describe it. So for this reason alone, I’m happy we had two nights in Death Valley to enjoy the stargazing.

As for more practical matters, it was a pretty good campground. We were finally out of bear country, which meant we didn’t have to put our food and other scented items in a locked box, and the bathroom had soap. The showers only had one curtained area, instead of the normal two, but it worked fine.

We lucked out that late September isn’t high season, so we got a campsite on the edge looking out over the gorgeous landscape without any other campers blocking our view. But even still, it’s not a huge place, so even if you got a site a couple rows back, it’s not bad.

There was a gas station and restaurant across the street, and I think they were all connected. We had to check in at the gas station, and the restaurant was happy to let us hang out for a few hours in the afternoon when it was still too hot to go back to our campsite.

I highly recommend camping at Panamint Springs when you visit Death Valley. 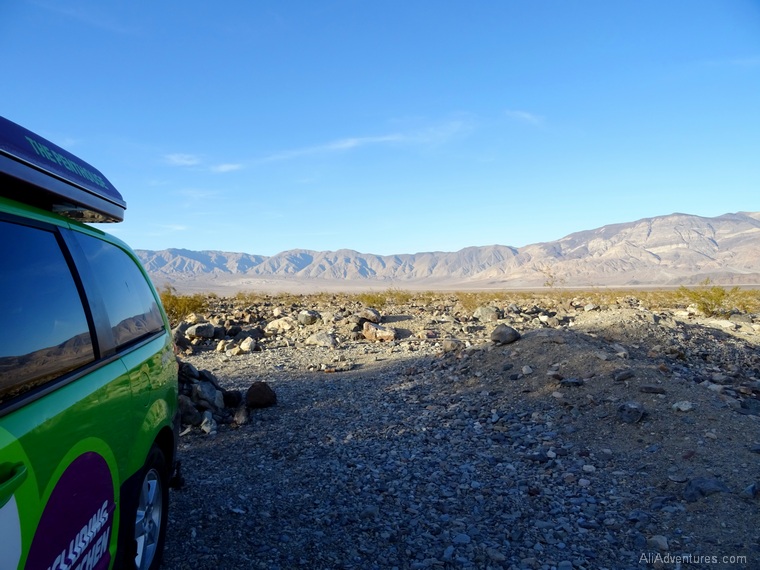 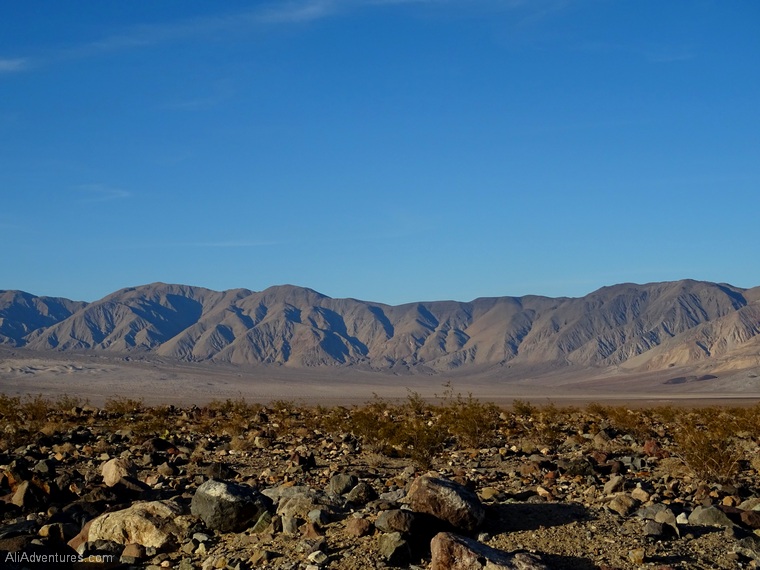 The normal entrance fee for Death Valley National Park is $30. If that’s the only park you’re visiting on your trip, and if you don’t plan on going to more than two national parks all year, it’s fine to simply pay the fee. But if you’re going to multiple parks, it is well worth buying a national park pass.

Death Valley National Park was amazing. It was so different from anywhere else I’ve ever seen. Despite the harsh conditions, there was still plant life and variety in the landscapes. It felt almost creepy in places while we drove around, especially since there weren’t tons of other people, but that just added to the uniqueness of it. This turned out to be one of my favorite parks on our road trip. 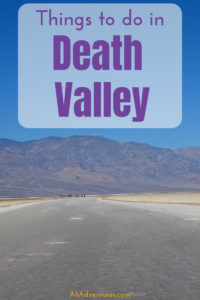 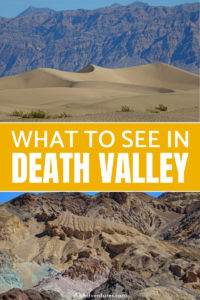