Our original idea was to visit Mesa Verde National Park in the southwestern corner of Colorado after our time in Monument Valley. But with the colder temperatures, and the fact that Mesa Verde is in bear country, we decided to skip it. This meant we had one night to play with, and it made sense to tack it onto the time we had already booked in Moab, UT. Here’s how we spent 4 days in Moab exploring Arches National Park, Canyonlands National Park, and more.

It was sunny when we arrived in Moab, but the weather forecast was showing rain for the next several days. With this in mind, we knew we were better off rushing to the park right after checking in at our campground. But it was late in the afternoon by the time we got there, and the visitors center had already closed. National park visitors centers are great places for maps of the park, info on sights and hikes, and the park rangers can also tell you about things like closures. We got none of this.

We didn’t think that would be a big deal, so we drove on into the park. One of the things I wanted to see the most was Delicate Arch. It’s the most famous feature of the park, and maybe even one of the most famous in the entire state. It’s even on Utah’s license plate. The options to see it are either a moderate to difficult hike or an easy hike with an overlook. We weren’t up for the harder hike, but we quickly found out the easy hike wasn’t an option.

Remember the fluke hurricane I mentioned that barreled through Arizona when we were leaving the Grand Canyon and during our time in Page, AZ? Well, that storm kept moving north and caused some damage in parts of Utah, including Arches National Park. The road to the parking lot near the easy hike and overlook was closed because of this storm. There was no way for us to see Delicate Arch without enduring a hike I knew I wasn’t going to be able to manage.

Instead we went in search of the Windows and Double Arch area and explored those. They’re still really gorgeous. Both are accessible from the same parking lot, and they involve short, easy hikes.

We also drove around and stopped at a few other lookouts and viewpoints, many of which were just small pullouts along the main roads. I really wish we could’ve spent more time here and seen more of the park, but with the incoming rain, I’m glad we at least got a few hours. And the park was even prettier as we drove out at sunset.

With three more full days in Moab, we planned on spending at least one day in Canyonlands in the Island in the Sky section. Unfortunately it rained pretty much that entire time.

We drove up there one day and tried to make the most of it. The views were very impressive despite the intermittent rain and the fog that rolled through and occasionally obscured our view.

Andy and I spent about 3 or 4 hours in the park at different viewpoints, hoping the skies would magically clear up and turn blue, but it wasn’t meant to be.

Two days later, we decided to try again. The park is much farther from the center of Moab, so even if Moab’s weather looked to be improving, there was no good way to know what it would be like at Canyonlands, or what it might be like after the 45 minute drive to get there. So we decided to just drive up there and wait it out.

The sun did actually peek out a few times on the way up there, so we got some slightly better views of some of the spots we had seen on our previous visit. We were able to make the short hike out to Mesa Arch this time too. But since the rain did continue to plague us, we found a parking lot with some open spots, made lunch, and hung out reading in our van for awhile. With nowhere better to be, why not just be patient and see what the weather gods delivered?

It worked in our favor and we were able to continue exploring. We never did get perfectly blue skies or anything, but it was a solid effort at a second attempt to see this gorgeous park. Canyonlands is definitely a different kind of canyon landscape than someplace like the Grand Canyon, so I’m glad we went.

On our way out, we turned down the road to Dead Horse Point State Park, but there was a big section of road completely covered with water. We’ve seen too many warnings and news reports of people thinking they can drive through what looks like a puddle and turns out to be a washed out road. So not wanting to get stuck, we turned around and never got to see this state park.

On our day in between days at Canyonlands, we spent a good amount of time hanging out at a cafe reading and relaxing. But during a short break in the rain, we went driving along the Colorado River. There’s a small park near the main road through town called Lion’s Park, and then from there, the road hugs the river for longer than we drove. As always, we stopped at several pullouts for photos and to enjoy the scenery.

It wasn’t as fantastic as the national parks themselves, but it was still pretty, and it was a nice way to see the landscape of the area when it didn’t make sense to drive all the way up to Canyonlands. 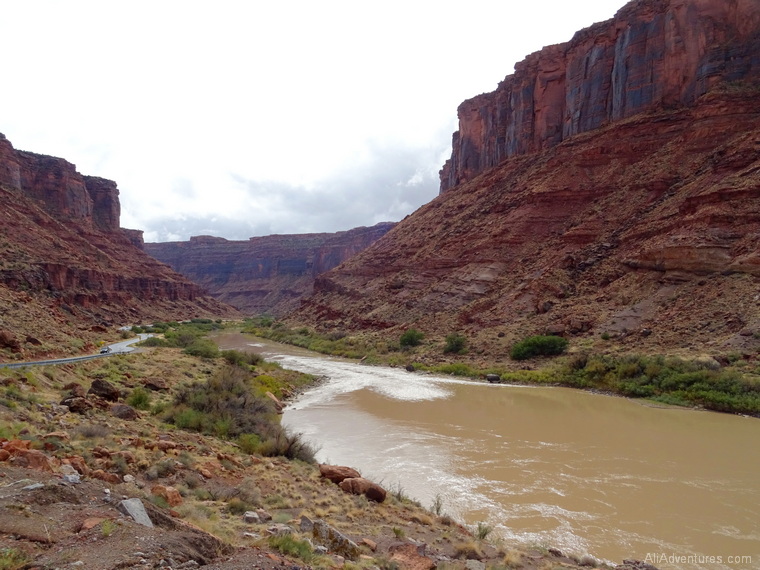 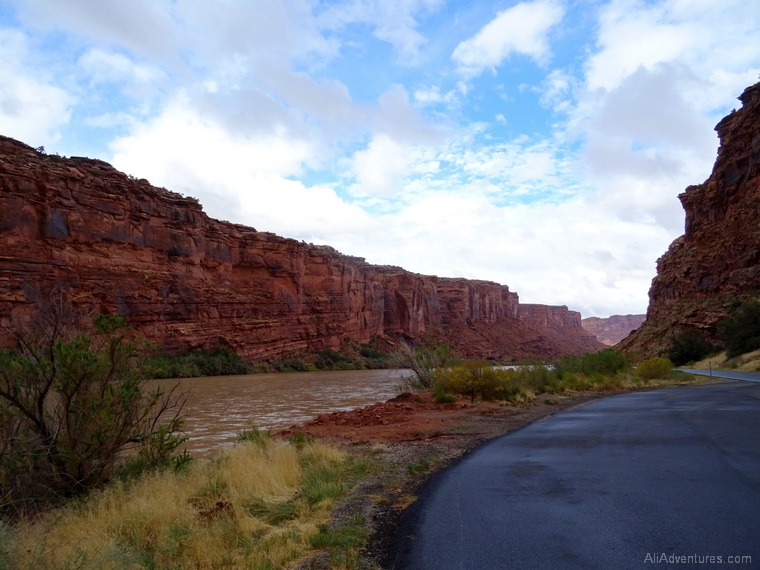 Where to camp in Moab

With two national parks in one area, it didn’t make sense to us to camp at either of them. Staying in an actual town appealed to us. We’re city people in general, and we knew that after 2 weeks of camping in remote areas, a little city time would be welcomed. Not that Moab is a huge city or anything, but it has more infrastructure than almost anywhere else we visited on our road trip.

On our first night in Moab, we booked a campsite at the KOA campground just south of the center of town. It had a decent general store where you could buy Utah’s standard low percentage alcoholic beverages that leave you wondering why you even bothered, plus some other snacks and supplies. There was a pool, but we didn’t use it.

The campsites were fairly spacious. We had plenty of room for our van, plus an area that was slightly covered where I imagine you’d pitch your tent, and there was a picnic table. The bathrooms were some of the nicest campground bathrooms on our whole trip. They were individual bathrooms complete with toilet, sink, and shower, so I never felt like I was in a grungy public bathroom stall. Nearby was also an outdoor sink for cleaning dishes and pans, so we didn’t have to use our pump sink.

I’d definitely recommend this KOA. Plus we got a discount because they had a deal with Jucy Vans, but I’d stay there again even without the discount.

We had originally booked 3 nights in Moab at Canyonlands RV Resort. But it was cold and rainy, and while we ate our cereal at the KOA, we decided to throw in the towel. The nighttime temperatures were predicted to get lower and the rain was going to continue for days. This did not sound like an enjoyable camping situation for us city folk. It looked like a great place though, so this campground is also one to check out if you’re camping in Moab.

Read Andy’s post for tips on where to eat in Moab.

Andy and I made a rookie travel mistake here. We looked online and found a hotel we thought looked tolerable and booked 3 nights. What we should’ve done was drive down the street to actually look at the hotels. I mean, we were right there! We didn’t have to rely solely on the internet photos. And beyond that, we should’ve just booked one night at a time.

Because what we ended up with was one of the worst hotels I’ve ever stayed in. The mattress had a plastic sheet underneath the normal sheet, which was not only creepy, but also made it really hot. The bathroom was stuffy and smelled musty and mildew-y. Overall, it was 3 nights of feeling gross and uncomfortable, and I couldn’t wait to get out of there.

I’m definitely willing to walk a way from a bad situation, but we were already paying for a campervan we weren’t sleeping in, and we had to forfeit our deposit (almost $60, which was one night) for the campground we canceled. So the idea of ditching a $155 per night hotel we had already booked for 3 nights was too much. And yes, that’s $155 PER NIGHT for an awful place. Hotels in Moab, especially if you’re booking last minute, are not cheap.

Read more about our favorite campgrounds and where to stay on a western US road trip.

The normal entrance fee for Arches National Park is $30. It’s also $30 to get into Canyonlands National Park. If these are the only parks you’re visiting on your trip, and if you don’t plan on going to more national parks all year, it’s fine to simply pay the fees. But if you’re going to multiple parks, it is well worth buying a national park pass.

The weather quite literally put a damper on our 4 days in Moab, UT. But I think we did pretty good with what we had. We still got to see some of Arches National Park in good weather. Canyonlands was tricky with all the rain and fog, but we saw a lot of it with two attempts. Moab was a nice town and definitely makes an excellent base for exploring the nearby national and state parks. Definitely add this area to your road trip, no matter the weather! 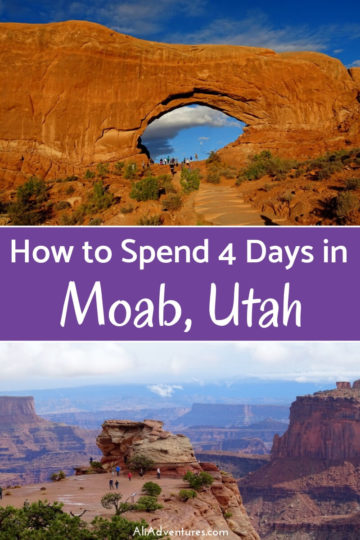 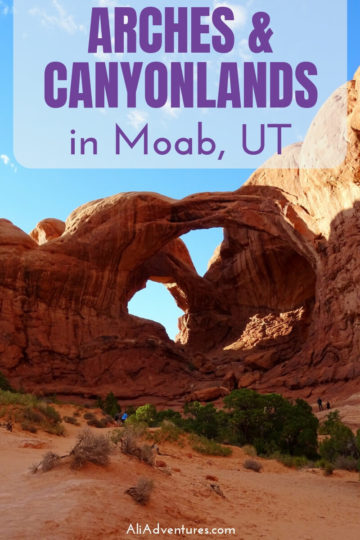