On the outskirts of Dunedin is a place called Tunnel Beach. It’s a rocky shoreline with sheer cliffs and rocks jutting out of the water. We had one more day left in Dunedin before our flight to Rotorua, so Andy and I decided to go check it out on New Year’s Day. After some research, we found out there is a bus that goes in that gets close, but not quite, to Tunnel Beach. We had at least 20 minutes to walk from where the bus left us, which would’ve been fine had it not been cold, windy, and threatening to rain the whole day. 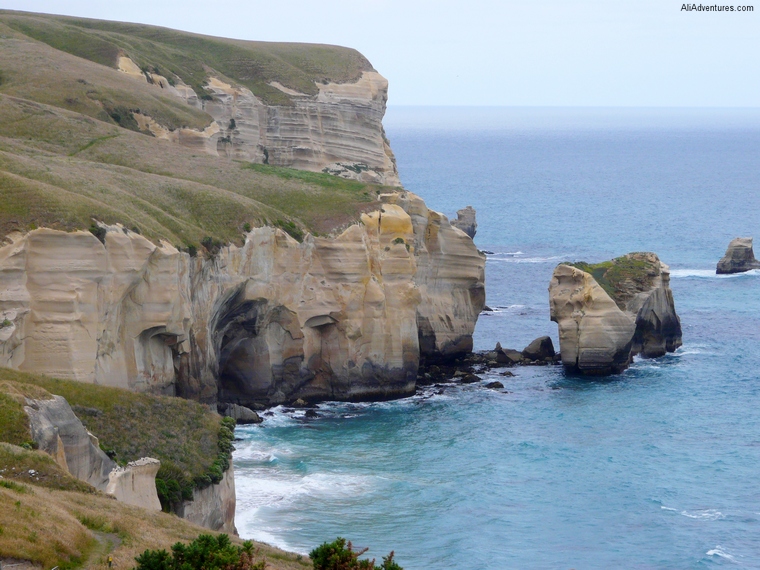 A small parking lot was the only indication that we were in the right place. The parking lot was a good ways up from the beach, so we had to walk down a winding path through a field to get there. The sign at the entrance to the path told us it would take 45 minutes to walk back up the steep path. I was not happy at the prospect of the steep climb, but I really wanted to see the beach. 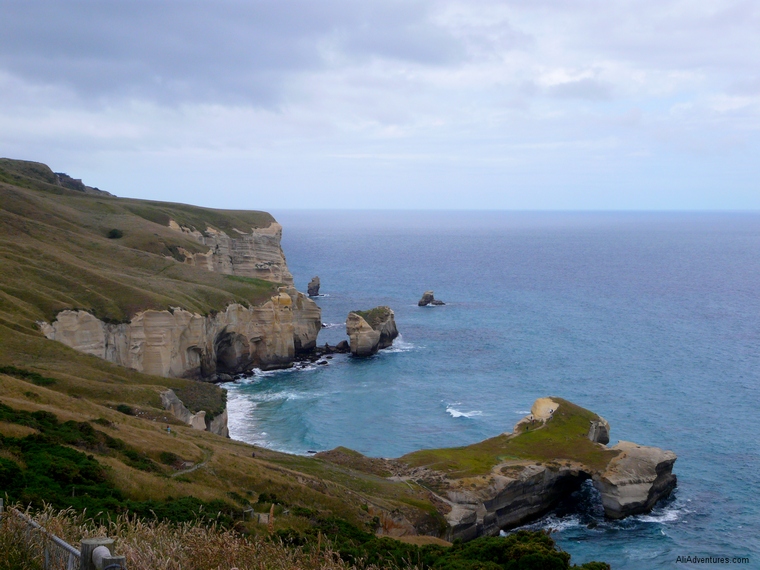 Narrow strips of land stuck out into the ocean, shaped by years of weather. In some places only rocks remained, sticking up from the water. It kind of reminded me of a smaller version of the Great Ocean Road. 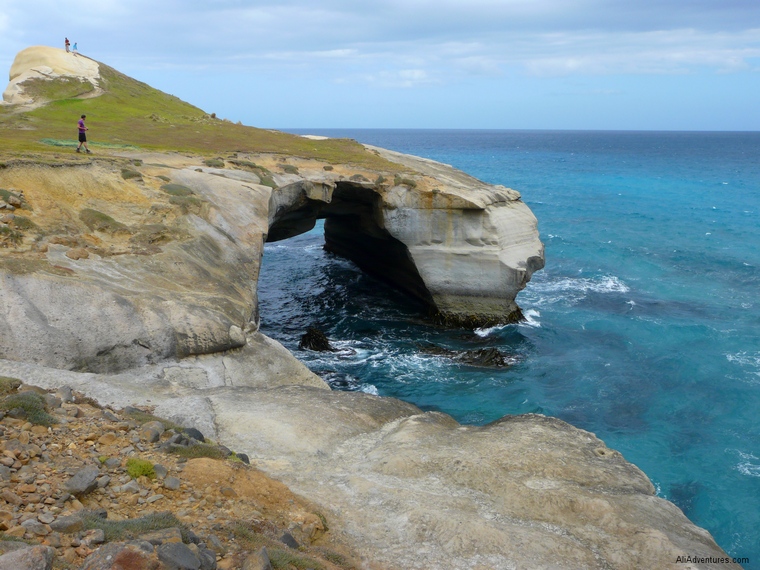 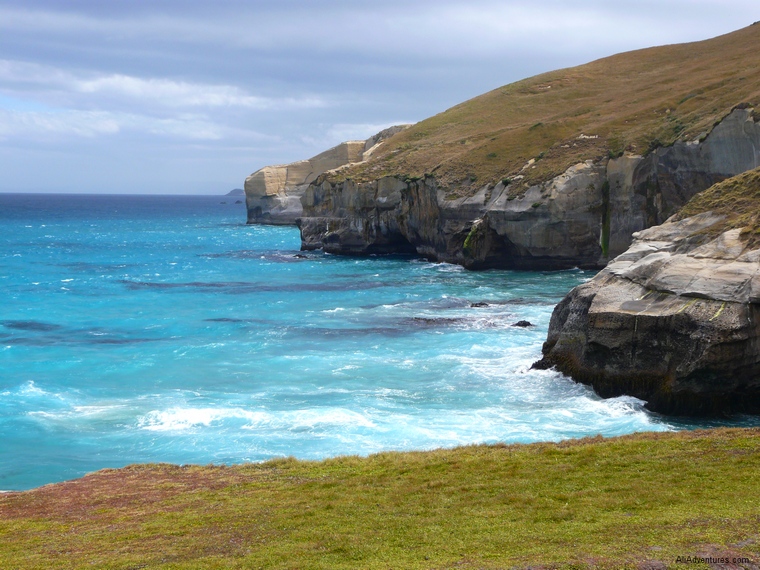 Finally the beach itself came into view. From where we were standing, it looked impossible to get to, but we knew that wasn’t true. The reason it’s called Tunnel Beach is because a tunnel was dug through the rock and stairs were built so people could get down to the beach. 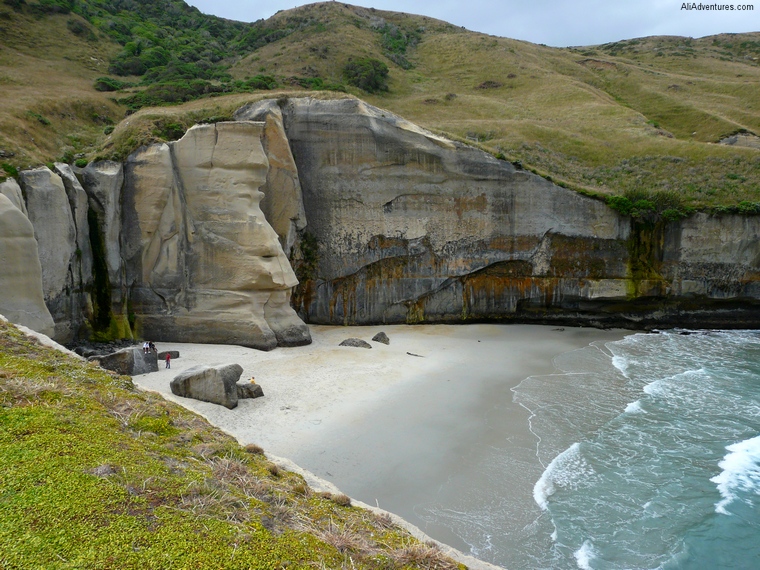 Despite the weather, we lingered on the beach for awhile just admiring the rocks. Andy put his feet in the water, but I decided against risking hypothermia. (Seriously, it was summer in New Zealand and we were wearing winter coats!) We also geeked out and wrote our blog names in the sand, which other people stared at in confusion. 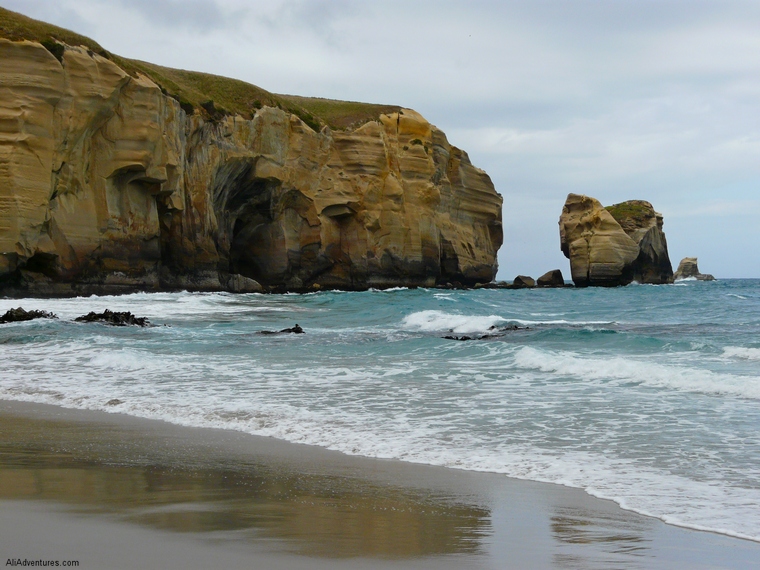 Eventually we started the uphill walk back up to the top. I hated every minute of it, it was so incredibly steep. I’ve mentioned I’m not in the best shape, right? This hill was torture. We had to keep stopping for breaks, which meant another couple would pass us. Then a few minutes later when we started walking again, we’d pass them taking a break, also gasping for breath. I wanted to cry. (Ok, maybe I did cry a little.) But somehow we still managed to make it up to the top just under the 45 minutes the sign claimed it would take.

Though the climb back up was tricky, at least we knew where we were going. Once we reached the top and started walking back to catch the bus, we realized we didn’t remember exactly where the bus stop was. After passing through some farmland and seeing some sheep and a llama (Or an alpaca? Not really sure. Also, I had no idea there were llamas/alpacas in New Zealand.) we were back in a residential neighborhood.

We wandered for awhile, knowing the bus stop didn’t really look like much of anything. We thought we were in the right place a few times, but eventually we ran after someone driving into their garage a few houses away from where we were and asked where the bus stop was. It turns out we had another block or two to walk. And then it started raining while we waited 20 minutes for the bus to show up.

This might not be the easiest or most convenient place to get to if you don’t have a car, but getting there by bus wasn’t bad. We just should’ve paid better attention to where the bus stop was. I highly recommend checking out Tunnel Beach if you’re in Dunedin, just be sure to bring some water for the trek back up.