In the Heat in Rotorua

Rotorua is known for its thermal activity, so it was someplace I knew I wanted to visit when I went to New Zealand. I had seen many pictures of the multicolored pools of water, and I wanted see them with my own eyes. So after four days in Dunedin, we hopped on a plane (without going through any kind of airport security…strange) and flew back to warmer weather on the North Island.

Our morning started out with a visit to Lady Knox geyser, which is said to erupt daily at approximately the same time. We were certainly skeptical since nature typically doesn’t follow such a strict schedule. Luckily when we arrived all was explained. Left alone, the geyser will erupt once every few days. But in order to regulate it so it’s easier for tourists to see the geyser erupt, they put soap in it. They didn’t say, but I have to assume it was environmentally friendly soap. So yes, it was a little cheesy to watch a geyser artificially prompted to erupt, but I’m sure it looks the same as if it had happened on its own.

After the eruption we went to the section of the park I was looking forward to most, the different colored pools. I know they’re caused by thermal activity and interaction with different minerals, but I still looked at them in amazement. There is such a variety of colors, consistencies, and sizes among the pools. This is definitely one of the most popular things to do in Rotorua, so it might be crowded, but it’s worth it. 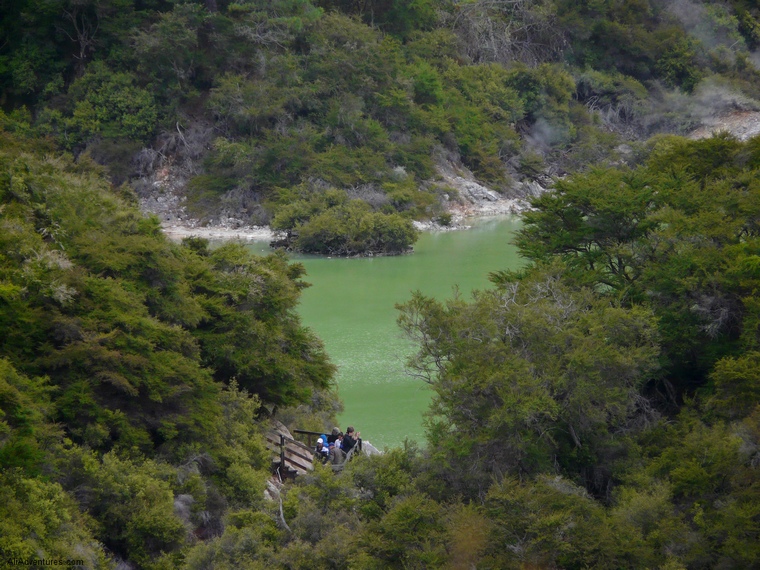 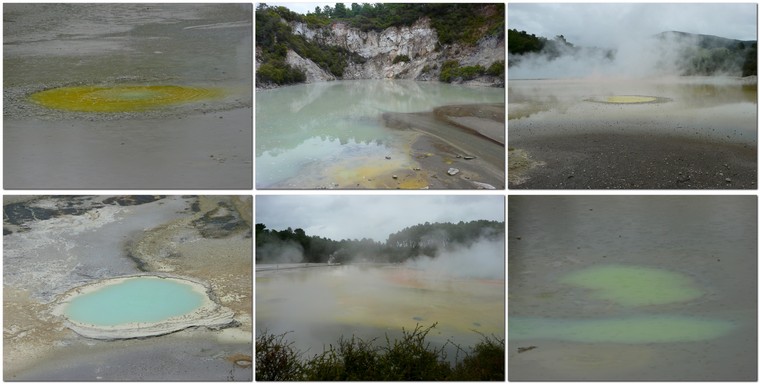 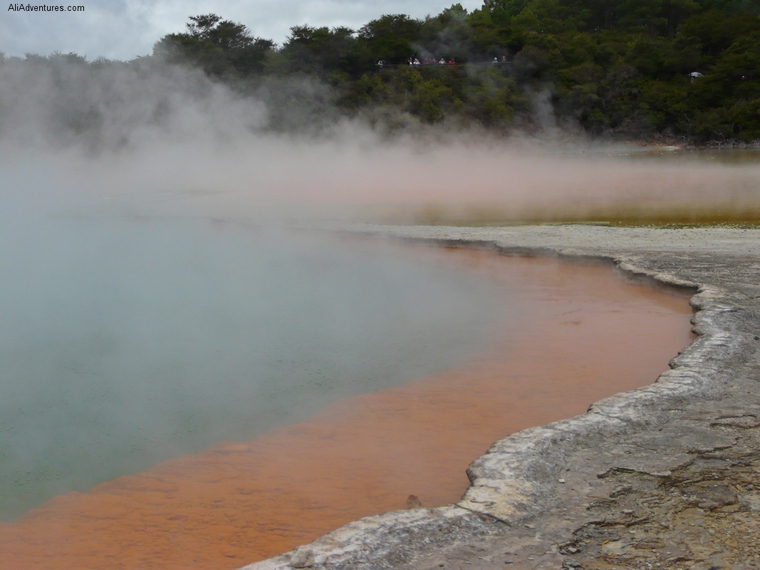 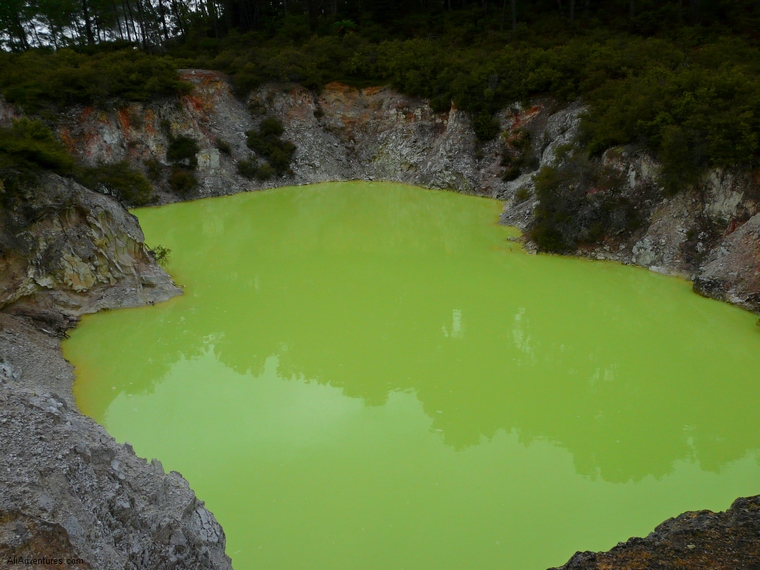 Warning signs are there for a reason

Aside from the amazing colors of the thermal pools, the other thing that amazed me were the people who ignored the warning signs. There were signs posted everywhere warning about the extremely hot temperatures of the pools and warning people not to touch the water. But apparently a sign that says 100 degrees Celsius (that’s boiling temperature for my Fahrenheit  readers) isn’t believable for some people. And so we saw several people step over the low wooden fences and stick their fingers in the hot water, just to make sure the signs weren’t lying. 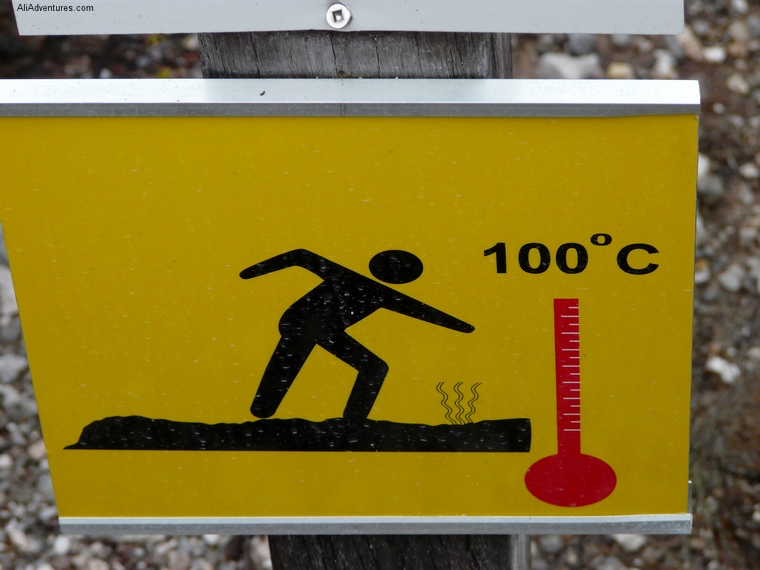 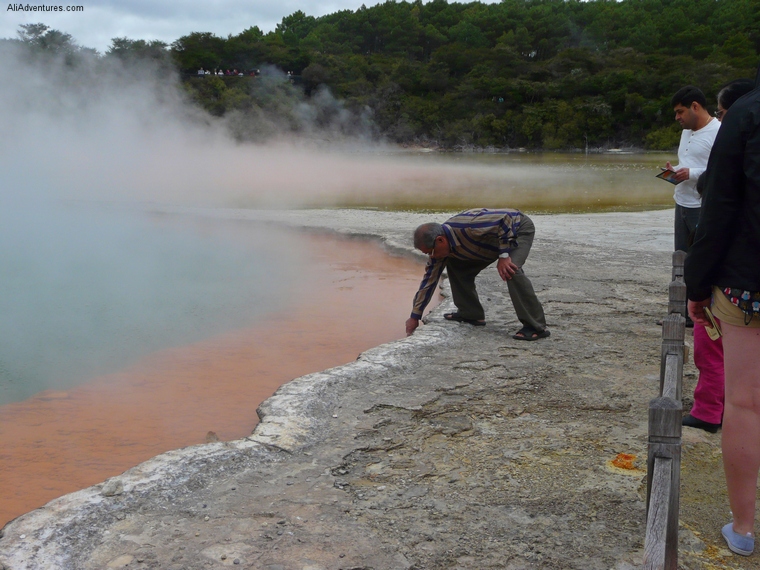 Please don’t do this. You might actually get burned. Or, you know, end up on someone’s blog as an example of how to act like an idiot.

Despite being induced by soap, Lady Knox Geyser was pretty impressive to watch as it erupted. The colorful thermal pools of Wai-O-Tapu were like an artist’s giant paint palette, and can be explored through three different connected paths. These attractions are the main reason to come to Rotorua, and they are totally worth the trip.

Sign Up
Bad Beds Around the World Saving Kiwis in Rotorua