The cruise on Milford Sound was the part of our New Zealand trip that Andy and I had been looking forward to the most. It’s not actually a sound, but a fiord, and it’s known as one of the most spectacular sights in New Zealand. We thought a day trip would be too short and might feel too rushed, so we decided to go with an overnight trip offered by Real Journeys. After our wonderful bus transfer and tour through Fiordland National Park, we arrived at Milford Sound with anticipation. 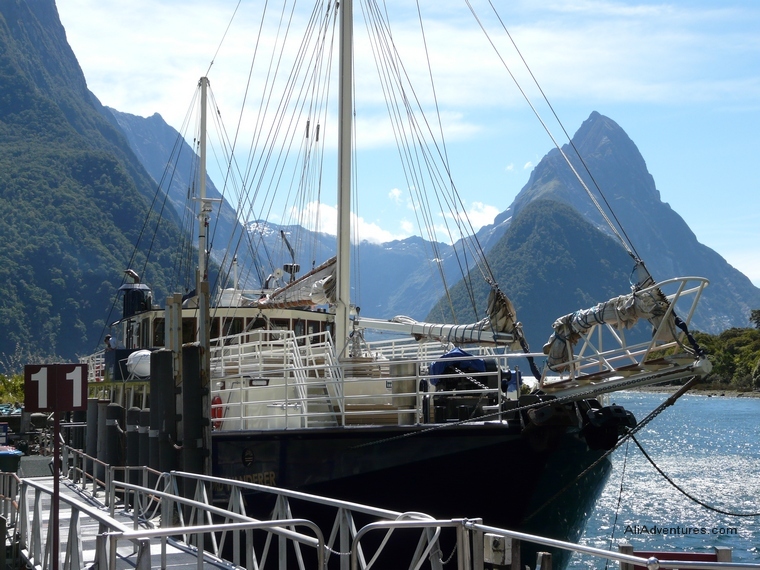 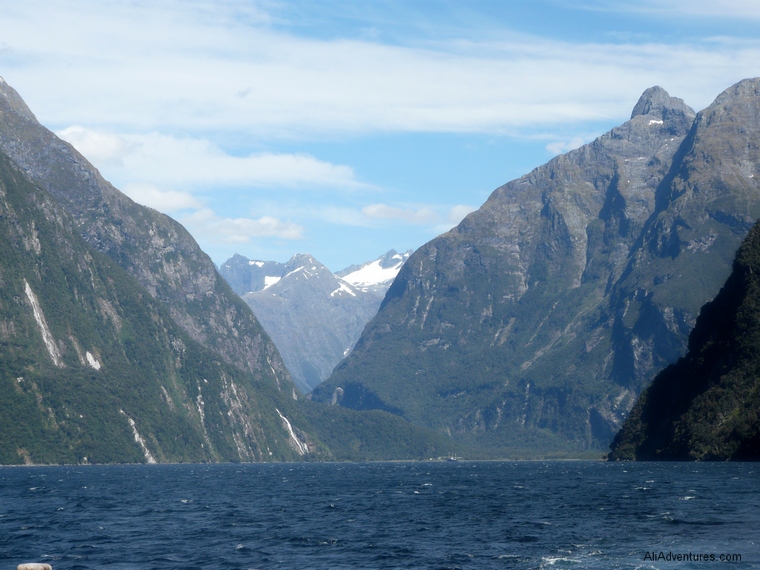 Once we were on the ship, we got a brief overview of how the night and next morning were going to work, followed by a hot bowl of broccoli cheese soup. Then we all wandered around the ship taking pictures of the gorgeous sound (I mean fiord) and learned about the area from the on-board nature specialist. I love waterfalls, so I was especially enthralled by Stirling Falls, which may look small but is three times the height of Niagara Falls! 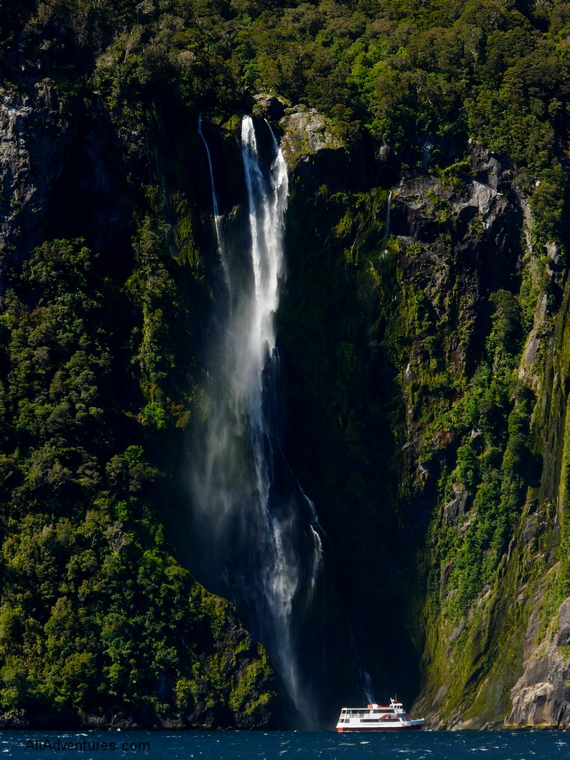 Now, I’m not in the best shape, but Andy really wanted to go and I was afraid I’d regret it if I didn’t give it a try. We climbed into our kayaks, Andy with our old camera that we wouldn’t cry over if we accidentally dropped it into the water (or into a pile of tomatoes), and we set off with a group of about 20. 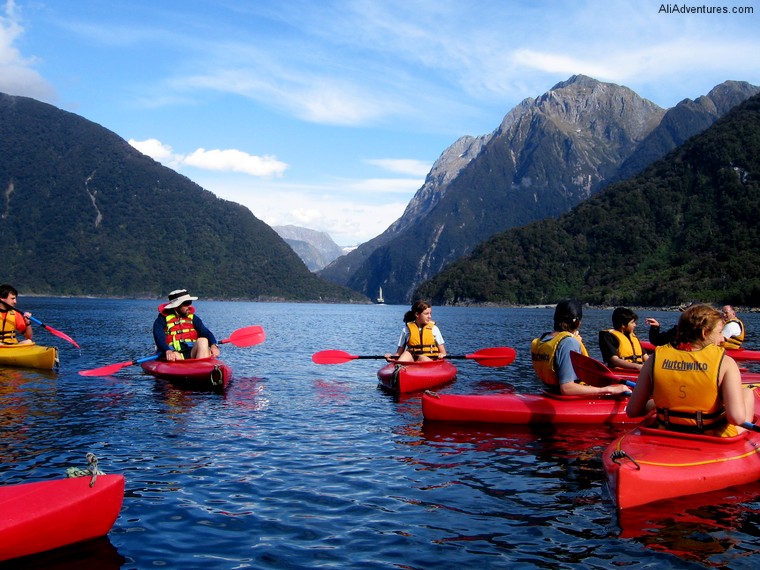 Rowing wasn’t so bad, despite my lack of upper body strength. However, the sand flies were almost the death of me. My clothes almost entirely covered my body, except for neck up and my feet. Supposedly if you keep paddling, they won’t bother you. My experience was that maybe the sand flies won’t bite YOU, but they will certainly still bite ME. I was almost in tears and headed for a toddler-like temper tantrum. But Andy, and most everyone else, seemed to be having fun. Someone did start passing around some bug spray, but that didn’t seem to deter any sand flies from continuing to feed on my flesh.

They have two different ships for the Milford Sound trip, the Milford Wanderer and the Milford Mariner. The ships follow each other, so you’ll see the same views no matter which ship you choose. The Wanderer has shared bathrooms and can hold up to 36 passengers, while the Mariner has private bathrooms and can hold up to 60 passengers. Andy and I were perfectly fine with shared bathrooms, especially since it was only one night, so we went with the Wanderer. 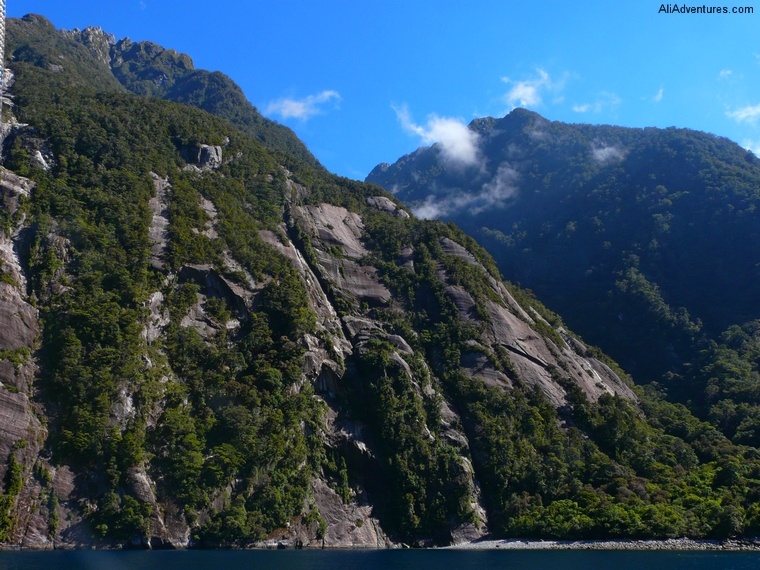 After the trauma of the sand flies, I just wanted a shower. When Andy and I got in the shower stalls (yes, separate ones) we both panicked that we were in for an ice cold shower. The knob in the shower seemed like it wouldn’t turn anymore, and the water was cold enough to take my breath away. But Andy kept pushing his until it finally turned a little more, yelled over the wall to me to do the same, and out came the hot water. For the duration of our showers, we had to keep yelling to other people who came in after us and had trouble getting hot water.

My turn to eat

After one of the best showers I had in weeks, Andy and I made our way to the dining room for dinner. The ship seemed to be filled mostly with couples and families, and even though Andy and I are a couple, we seem to gravitate towards solo travelers. Maybe because we’ve both done so much solo traveling. We ate dinner with a woman we met on the bus who had really interesting stories about teaching in Malaysia and a few other countries. Andy and I also enjoyed the on-board bar, especially since the day before was Christmas and it is near impossible to get alcohol in New Zealand on Christmas Day. We finished out the night by admiring the stars of the southern hemisphere without any city light pollution. 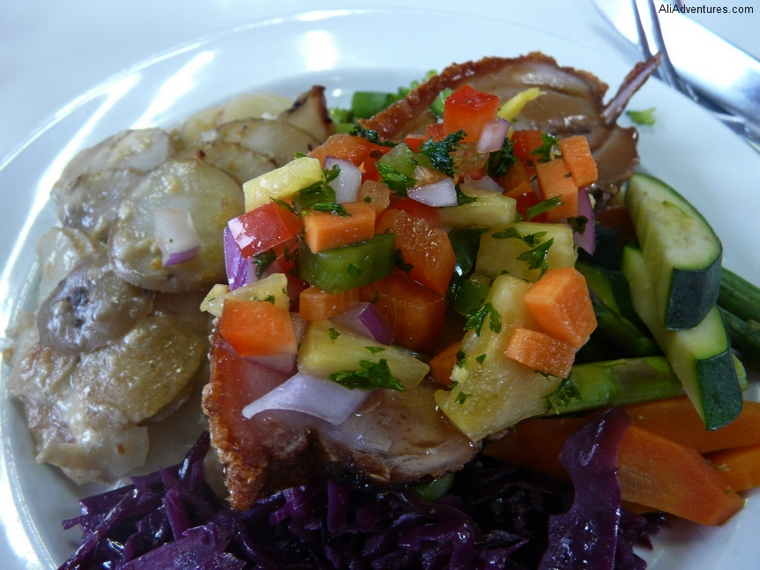 Andy and I received a discount from Real Journeys, however all thoughts and opinions are my own.