On Living a Non-Traditional Life

When I was 25, I got a job that required me to relocate to southern Minnesota, where their home office was, for a 5 month training program. (Bonus: It was in the winter.) I rented a room from a woman who lived there and worked in the company’s home office, and I met trainees from all over the country. I also worked closely with dozens of Minnesota locals while learning the ropes of my new job.

One day I was on the phone with a friend back home, and he laughed at something I said. He told me I was picking up a Minnesota accent, with a handful of my words, and he found this entertaining.

It was my desire to fit in. I wasn’t doing it consciously, but sure enough, my instinct to be like everyone else, to not stand out, led me to change the way I pronounced certain words in just a few months.

Over the years, I’ve realized I do things like this quite often. I want to fit in. I don’t want to be the weirdo.

And yet, I’ve totally set up my life to go against the norm, to be non-traditional and unconventional. I don’t want to follow everyone else’s path. It fights with that whole fitting in thing, but I’m finally accepting the fact that going down the traditional route is not how I see my life.

Here are 6 ways I live a non-traditional life.

Meet a guy, get married, buy a house with a big lawn and a two-car garage, have kids. It’s what we’re all expected to do. But what if that picture just doesn’t fit? What if I don’t see myself anywhere in that vision?

Ever since I was old enough to realize not everyone has to have kids, I haven’t wanted them. I have no desire to create another human. I don’t ooooo and aawww at other people’s babies. (Other people’s cute puppies though…I can’t get enough.)

I’ve heard it all:

Insulting and exhausting statements, every single one of them. Please don’t say those things to your child-free friends. Our choice not to have children is just as valid as someone else’s choice to have them.

And even aside from simply not wanting kids, I have ulcerative colitis, an autoimmune digestive disease that requires me to take medication every day for the rest of my life. The disease is often triggered by stress, and I can’t even imagine the damage pregnancy and child rearing would do to my body. My own personal health is way more important than procreating.

I don’t HATE children. I love my niece and nephews, and I’m happy for my friends whenever they have kids. But it’s not for me.

Living in Europe was something I dreamed about ever since my first trip across the pond when I was 14. I took several school-organized trips, dragged my best friend to Italy when we were 18, enrolled in a study abroad program to Spain in college, and continued traveling to Europe in my late 20s.

But it wasn’t until I was about to turn 30 that I started seriously thinking about how to make that dream happen. I had to get out of my soul-crushing job and do something different with my life. When I met Andy, who had already been living in Germany for a few years, everything fell into place.

I didn’t marry him because of geography. But the fact that his lifestyle already fit with my goals was a huge bonus. I moved to Germany knowing it was a long term commitment to the place, not just something to test out for a year.

Now Germany is home. I’ve lived here for 5 1/2 years, and I’m in the process of applying for permanent residency. People still ask how long we’re staying or if/when we’ll ever go back to the US. But my home is in Berlin and, while I’m not against exploring other options in the future, I really don’t see myself living anywhere else, especially the US, anytime soon. 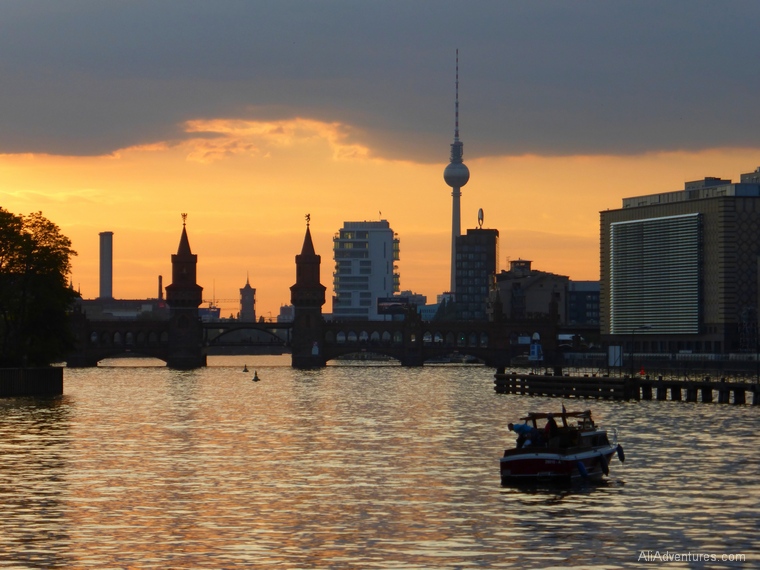 Getting an office job brings a sense of security to a lot of people. When I graduated from college, I never even considered doing anything else. As a result, I spent 9 years working in insurance jobs that made me miserable but not sure how to get out.

And that sense of security is an illusion anyway. I know lots of people who have been laid off (some several times) from supposedly great jobs because of budget cuts or corporate restructuring. Companies aren’t loyal to employees anymore, so employees have little incentive to stay at one place for decades. That big retirement package just isn’t there anymore.

Working for myself isn’t exactly secure either. My money is dependent on internet traffic, ad rates, Google, Amazon, and a handful of other factors I don’t have control over. But I get to control my time and where I work and even things like being able to wear my comfy pants all day instead of a suit and uncomfortable shoes. I know that I can put more effort into blogging and it will usually result in an increase in my income.

I can’t imagine ever going back to an office job. Some people think it’s odd that I work from home and make money from blogging (plus a few other contracts and a tiny bit of freelance writing) but this path works for me.

>>Learn how to start a blog and earn money working online. 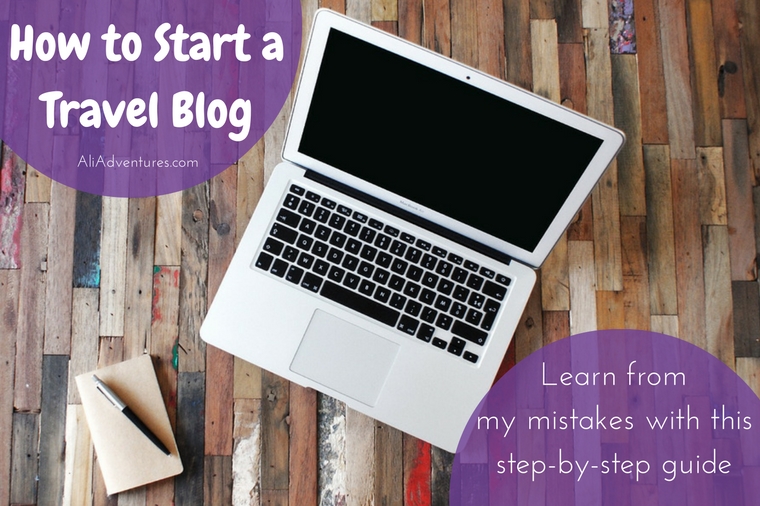 Taking 2 weeks of vacation every year just isn’t enough for me. Even when I worked in a traditional job and had 3 weeks vacation, I managed to stretch those vacation days by planning trips over holidays and working around weekends. Often I ended up traveling the equivalent of about 4 weeks each year.

Now that I’m self-employed and not tied to a specific location, I have tons of flexibility. I hate the cold, gloomy winters in Germany, so I convince Andy to take his Valium and hop on a plane with me each winter to go somewhere warm and sunny. Usually those trips are anywhere from 3 weeks to 2 months. We also travel a few times throughout the year, usually within Europe, to scratch the travel itch and get a change of scenery.

People often wonder how I manage it, how I can afford it, but it’s all about priorities. Travel is my number one passion, so that’s where I spend my money. I don’t buy new clothes or shoes or purses or electronics. I’d rather be able to travel more often. 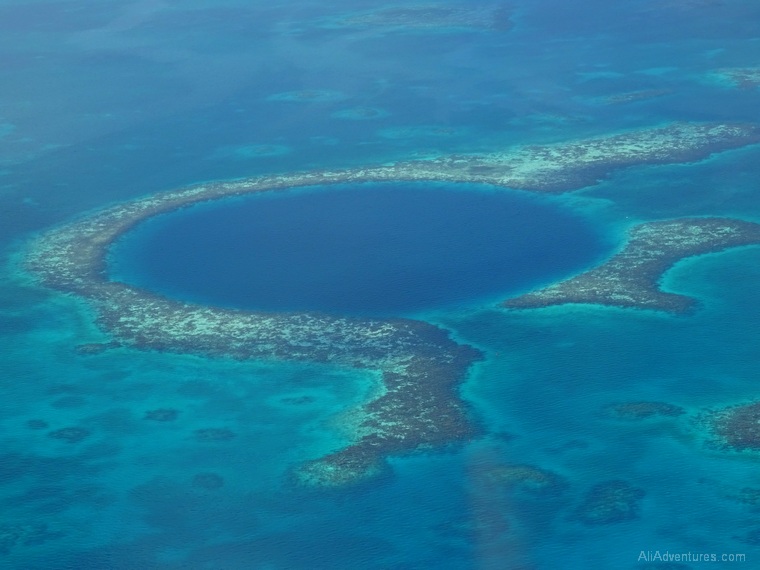 5. Traveling solo even though I’m married

For some reason people think it’s weird to travel solo, especially when you actually have a partner. They think it’s sad or lonely or boring to travel by yourself. But guess what? That’s often not the case. Sure, I’d rather travel with Andy, but he isn’t quite as addicted as I am, and he hates to fly.

My solution is to occasionally take trips without him. I went to Cyprus in April when it was still cold and gloomy in Berlin because I needed some sunshine. In October when Andy went to Essen for a big board game festival, I went to Kosovo for a few days.

It’s a way for me to see more places, especially places he isn’t so interested in. I get my hit of travel, and since they’re solo trips, I get a jolt of confidence from it. Solo travel is a great way to build confidence because suddenly I’m handling everything on my own. I have to figure out where things are, how to get around, what I want to do and when, where to eat, all without anyone else’s input.

And as much as I’d rather travel with Andy, I’m remembering how good solo travel is for me. 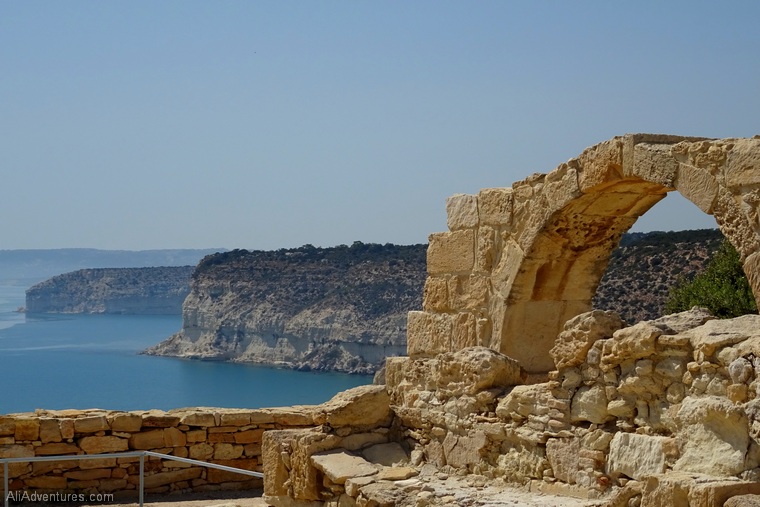 In the US, it’s almost unheard of to not have a car. Most places are inaccessible without one, and it’s only in select cities like New York City and Chicago where you can really carve out a life that doesn’t involve car ownership.

It’s not like that in Germany. We can easily arrange our lives in a way that doesn’t require a car because public transportation is wonderful and connects everything you’d ever need in the city. Outside the cities, the German rail system can get us to almost anywhere we want to go. The only time I ever think “I wish we had a car” is when we’re buying big things from Ikea. Which doesn’t happen often, and they deliver for a fee.

Instead of having a driver’s license agreement with the US as a whole, the agreements are with each individual state. So some states are easy, bring your license into the office here and swap it out for a German one. Other states mean having to redo some of the test, which still isn’t a big deal. But then for a big group of states (including Georgia) you have to start over from scratch.

If I wanted a German driver’s license, I’d have to sit through weeks of classes and do countless hours of driving instruction. All for around 2000 euros. Two. Thousand. Euros. At least for now, it’s simply not worth the cost. 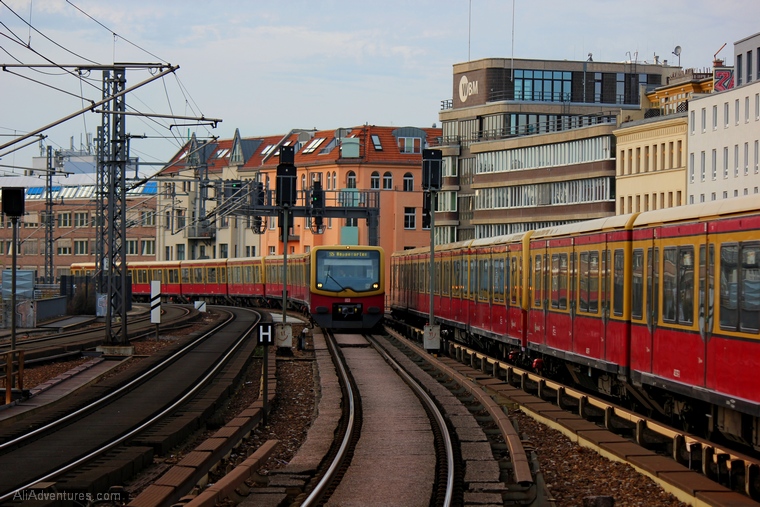 These are just a few of the ways in which I live a non-traditional life.

You don’t have to live a certain way just because everyone else is doing it. If something doesn’t fit with your beliefs or desires or life goals, don’t do it. Embrace who you are and what you want out of life, and don’t worry about what other people think.

Do you live a non-traditional life? Would you like to? Make up your own rules and start living the life you want. 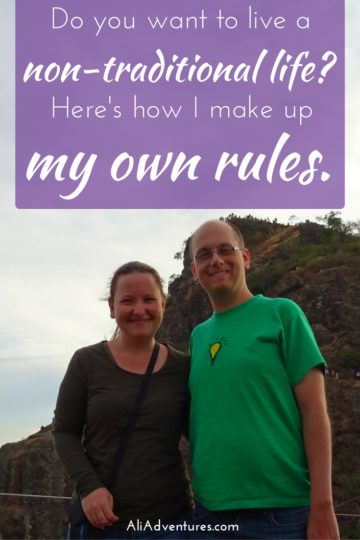 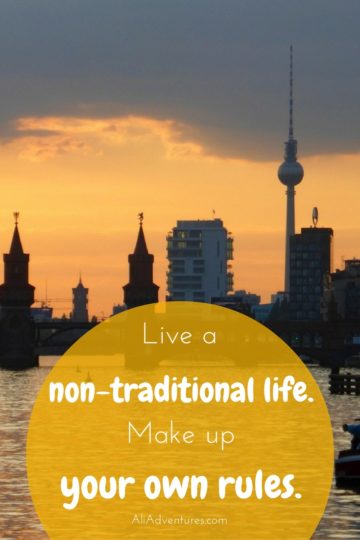