Exploring Kosovo: A Country Under the Radar

Kosovo is probably not on your travel wishlist. But I’m so glad I went. Andy was at a board game festival in Essen, Germany, so I planned a solo trip to Kosovo during the same time. I only had four days, but I got to see three different cities, and exploring Kosovo gave me a glimpse at a controversial country.

You see, Kosovo was once part of Serbia, but they declared their independence in February 2008. Serbia, along with a handful of other countries around the world, does not recognize Kosovo’s independence. The United States, as well as most of Europe does recognize Kosovo as its own country. 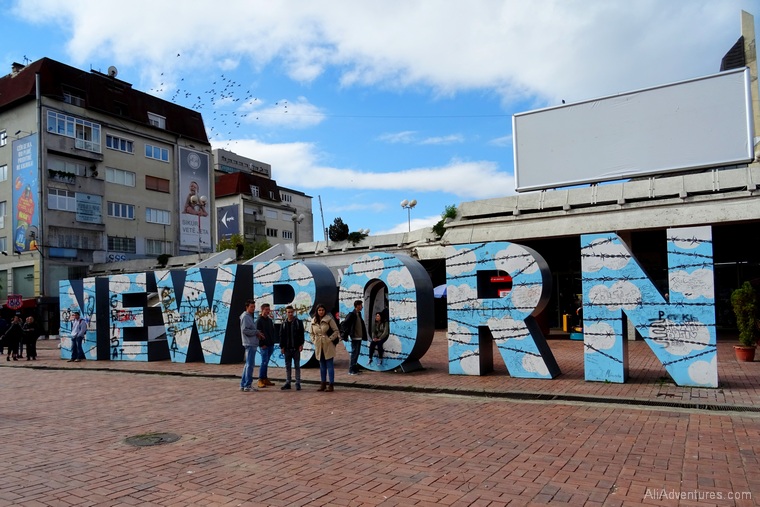 The majority of Kosovo’s citizens are ethnically Albanian, and aside from once being part of Serbia, they were all part of Yugoslavia. Kosovo played a key role in the war in the 90s and many of its people fell victim to brutal torture, killings, and ethnic cleansing at the hands of Serbia. The UN acted as a protector in the aftermath, but an agreement between the two sides could not be met, leading to Kosovo’s declaration of independence.

This makes border crossings a little tricky. If you are in Serbia, you can cross into Kosovo by land, but you must go back into Serbia in order to get properly stamped. If you enter Kosovo first, you can’t cross directly into Serbia because they won’t recognize your Kosovo entry stamp as valid entry into Serbia. I flew directly from Berlin, and I didn’t go to Serbia, so I didn’t have any complications to worry about.

My first stop, Pristina, Kosovo, had an interesting mix of brand new buildings and old, worn buildings, even crumbling buildings. It’s a modern city, but Kosovo is one of Europe’s poorest countries, and it shows around the edges. 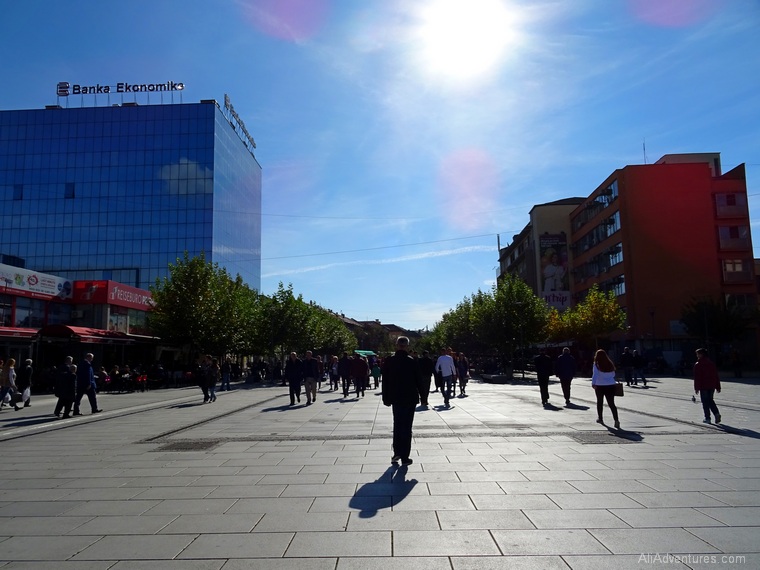 There was a nice pedestrian area in the center, walking distance from my hotel, that led to Mother Teresa Square. When I reached the square, I saw a big photo exhibit and stopped to check it out. It included photos and stories mostly about the Kosovo/Serbia war and the ethnic cleansing/genocide, but there were a few relating to World War II.

Stories of a couple where one was from Kosovo, the other from Serbia, and what being from two different sides meant for them. Stories of parents killed and found by their children, who were hiding. Stories of people who were randomly attacked, shot, tortured, and killed. Stories of homes taken from their owners. Stories of limbs lost and of people whose bodies were never found. 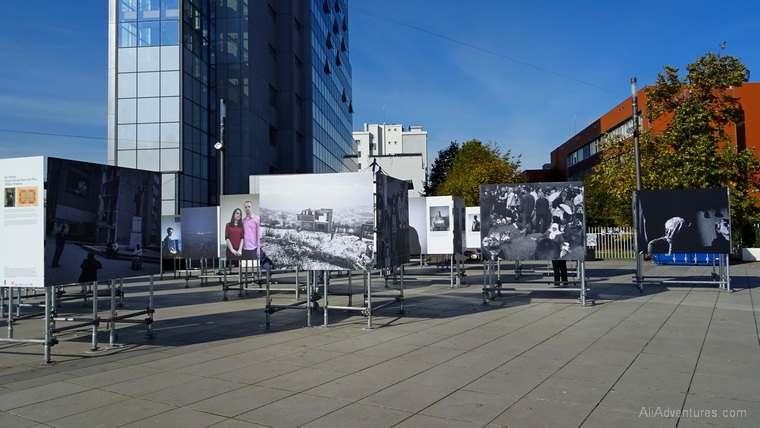 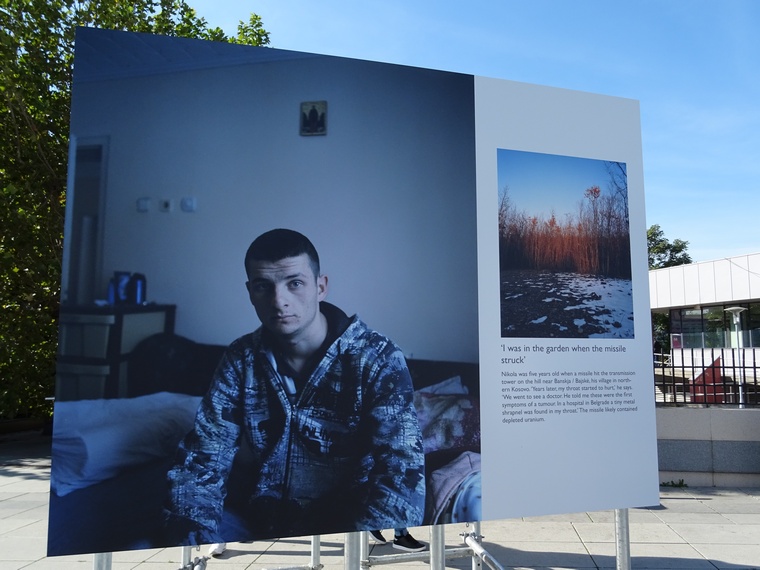 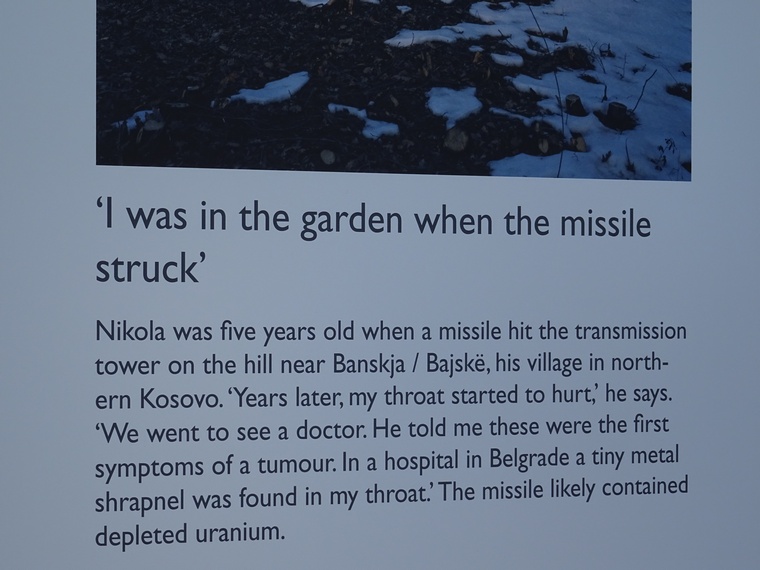 A man who was guarding the exhibit saw me and stopped to talk to me. When I told him I don’t speak Albanian, he asked where I was from.

The United States helped Kosovo a lot during the conflict, from the 90s and into the 2000s, and the people remember it. There’s a Bill Clinton statue in Pristina, as well as streets named for Clinton, George Bush, and Robert Dole. Several other cities around the country also have roads named for Bill Clinton. 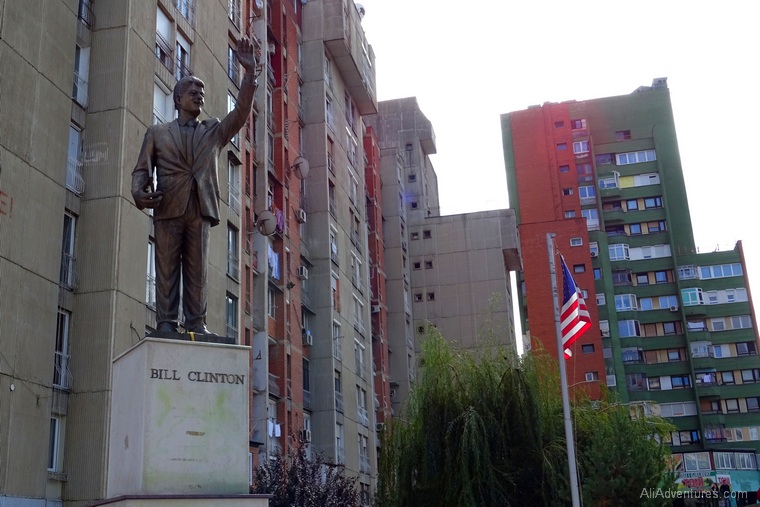 Prizren – Castle on the Hill

The next city I visited was Prizren, which is known for a ruined castle up on a hill above the city. The city center was small but charming, with a small river flowing through it and pretty stone bridges connecting one side to the other.

The climb up to the castle was along a steep path. I’m totally not in good shape, so I had to stop several times to catch my breath and shed a few layers, but it was worth the climb. I explored the ruins and took some pictures, and then I found a spot on the wall to sit. I had read that it was a great place to watch the sunset, so I relaxed and enjoyed the view for a couple of hours until the sun disappeared behind the hills. 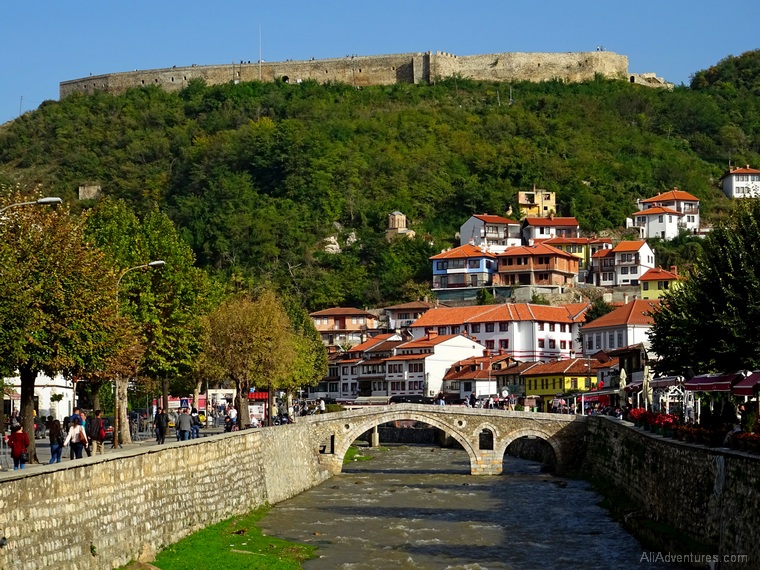 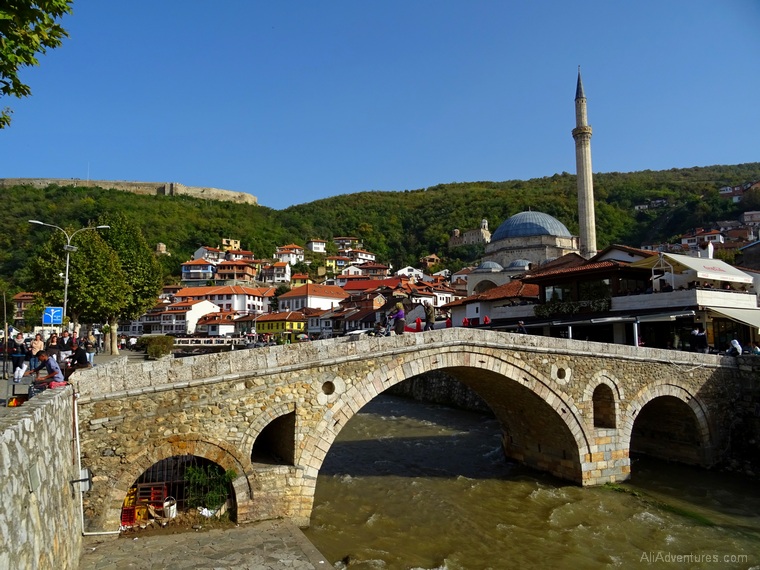 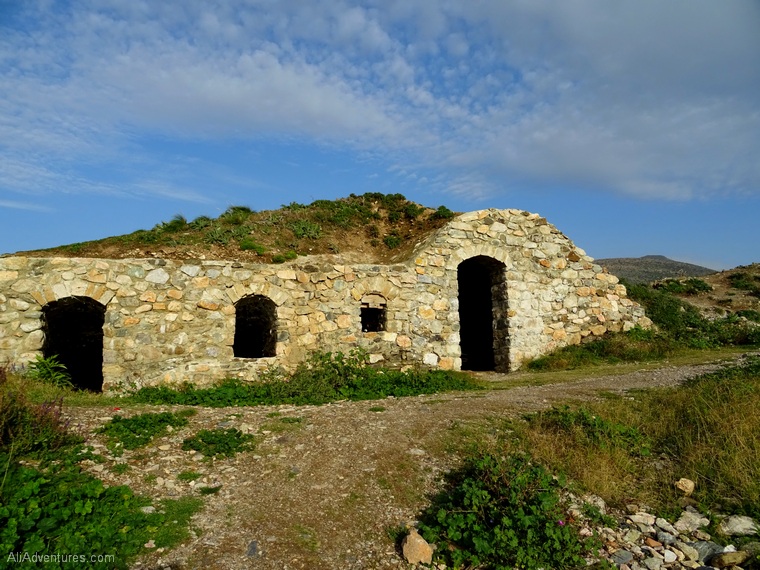 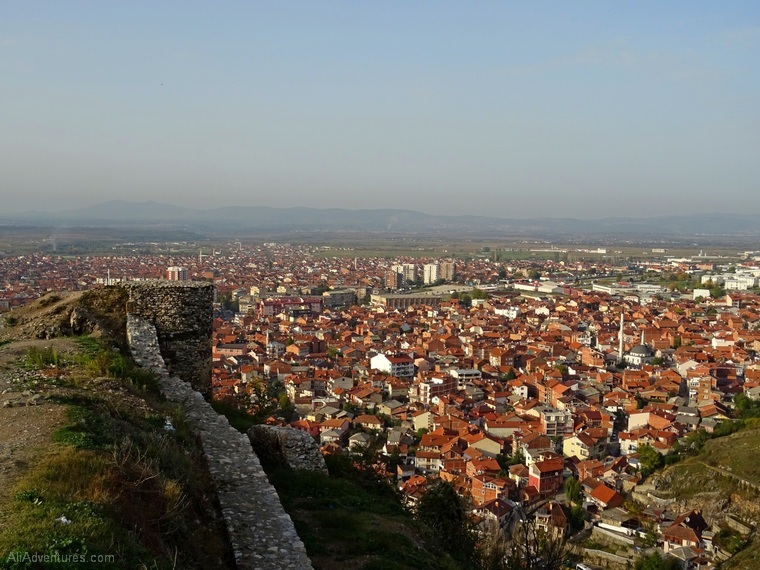 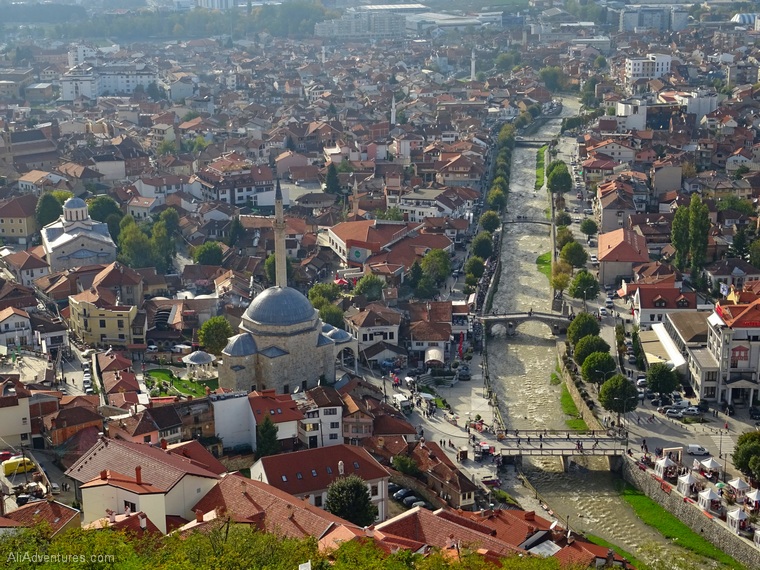 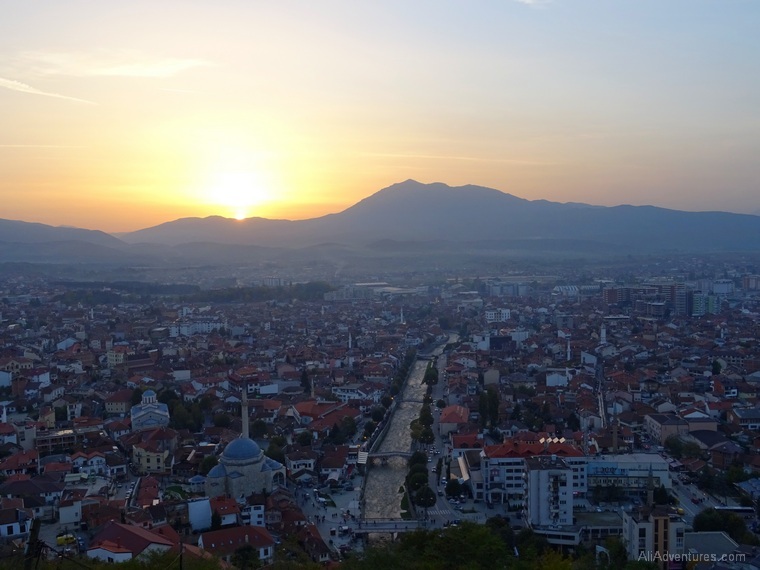 My final stop before returning to Pristina was Peje. Since Kosovo was part of Yugoslavia and then Serbia, there are still places of Serbian importance within Kosovo’s borders, and one of them is a monastery in Peje. They don’t allow photos inside, but from what I read, it sounded like an interesting place.

The monastery is located on the edge of town, so I set out walking, in the rain, to go check it out. If you walk along the north side of the river from the center of town, you’ll get there eventually. I think it took me 30 minutes or so.

Once I reached the gate at the street, I had to show my passport to a guard. He checked it over for a few minutes in his little hut, handed it back to me, and pointed me towards the entrance a few hundred meters down a path. 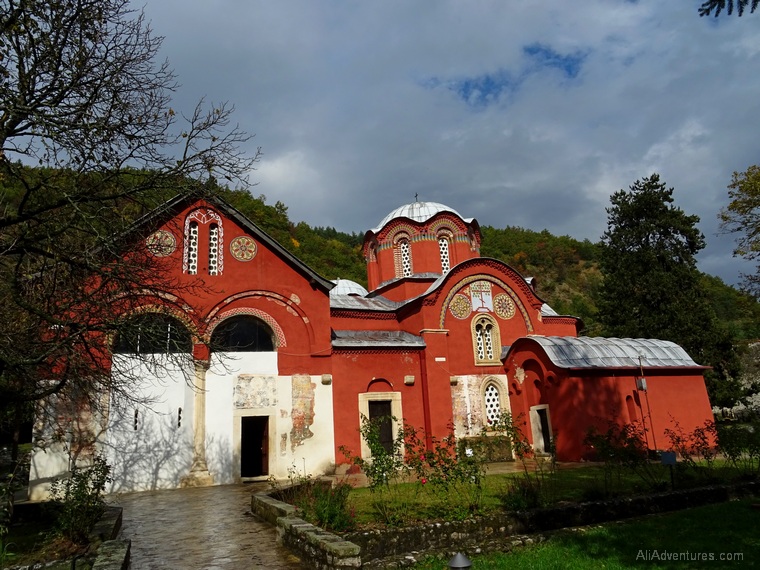 After that, I had to pay a 2 euro entrance fee to a nun, and this included an audio guide. I was the only one there for most of my visit, and there were two guys, employees of some sort, hanging around and pointing me in the right direction when the next number on the guide wasn’t immediately obvious.

Many of the frescoes were worn from age, but the interesting thing to me was the colors. They were more muted, shades of gray and darker blues, as opposed to bright colors usually found in churches. The audio guide told stories of the church’s history, though to be honest, I didn’t retain the information.

And when I went back outside, I was happy to see the rain had cleared and the sun was shining. I spent the afternoon reading outside on the hotel restaurant’s patio overlooking the city. 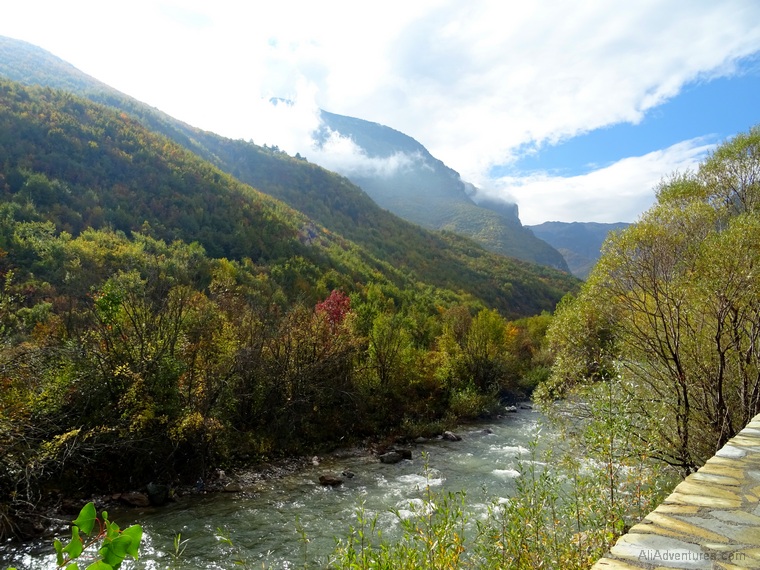 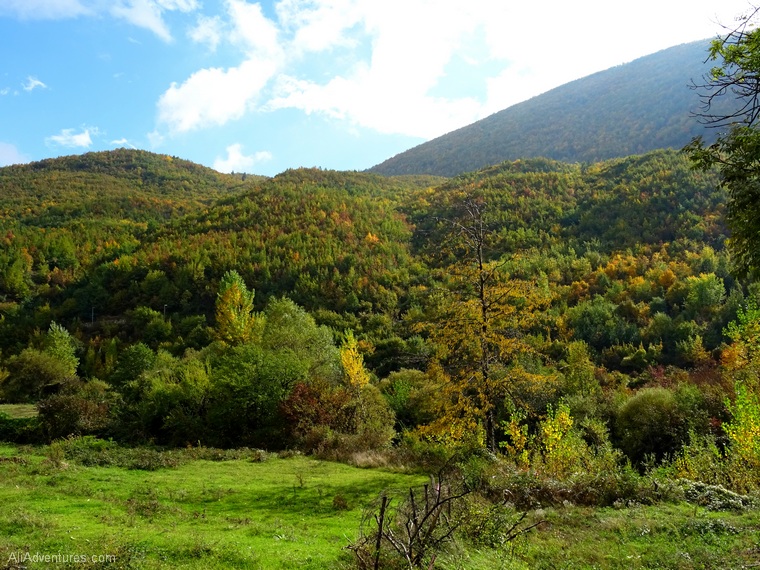 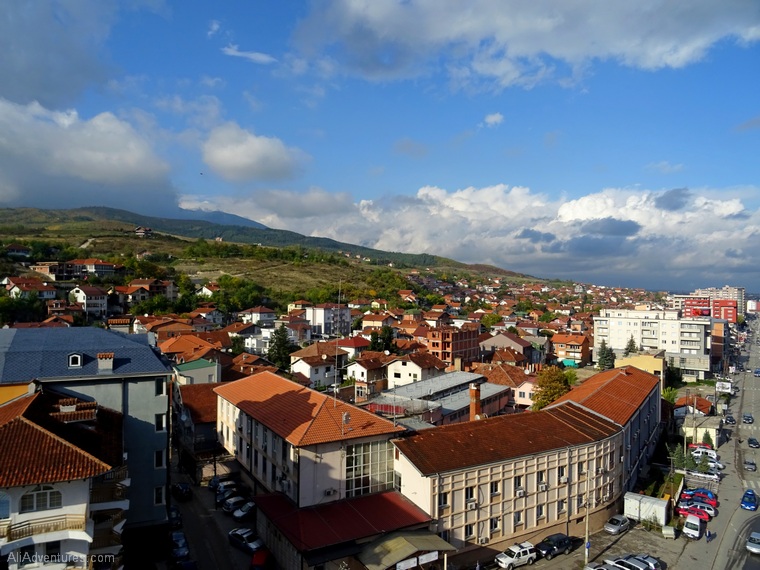 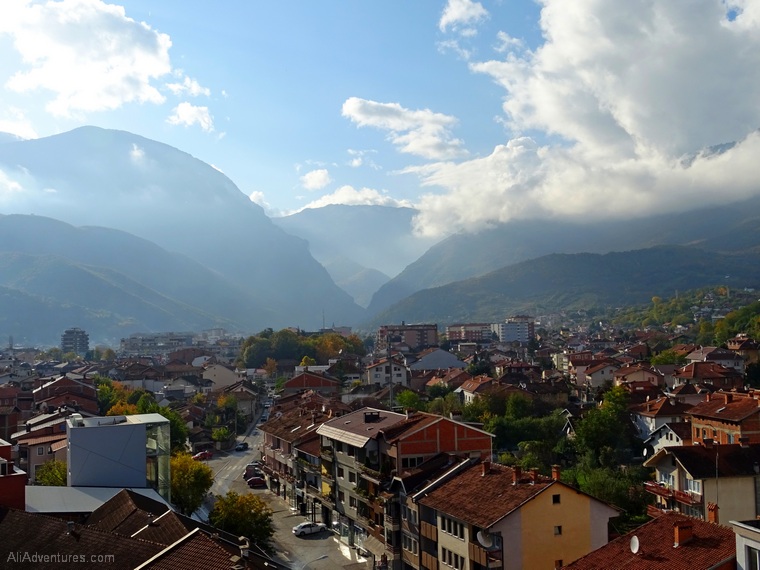 Kosovo is one of Europe’s smallest countries, so you can see a lot in a short amount of time. However, my one regret is that I didn’t have time to get to Mitrovica, a city divided between Kosovo and Serbia. It’s not even on the border, which is all the intriguing. This is supposed to be one of the few places where you can really see how the conflict affects life for the people in Kosovo, though there is rarely concern for safety.

Because of the country’s size, getting from one city to another rarely takes more than an hour or two. I used this site to check bus schedules, but I purchased bus tickets on the spot, not through the website.

The currency is the euro, but prices are very inexpensive. I paid about 30 euros a night for each of my hotel rooms, 4 euros for each bus, and I never spent more than 4-6 euros for a meal.

The one hotel I really liked that I would recommend was the one in Peje. I originally booked one night, but at the last minute, I decided to stay for two and skip my last night in Pristina. It was a slightly odd location on the top floor of a not-completely-full mall, but once you get past that, it was great. 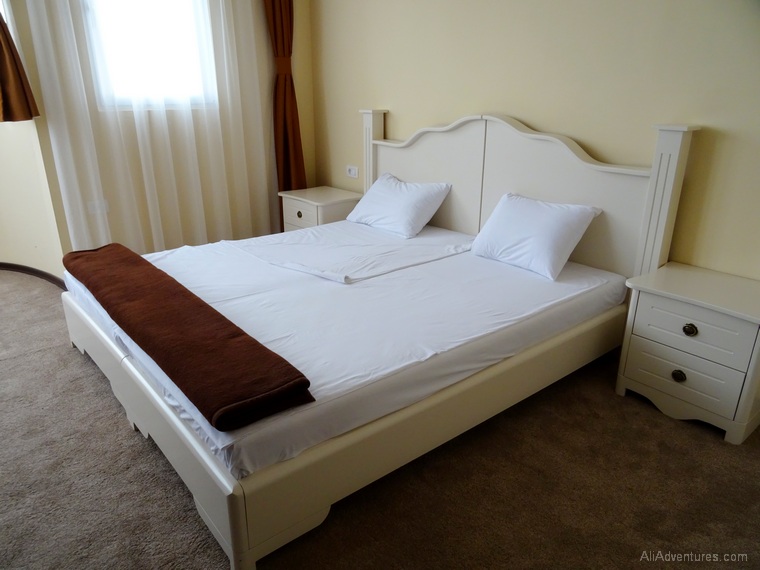 Since it was high up in a tall-ish building, the views of the city were pretty, especially from the restaurant side. The bed was comfortable, the shower was really nice, it had a mini-fridge, a desk and a couch, and breakfast was included. Now, breakfast was a little odd too – they handed me a full menu that included almost nothing I would consider breakfast food. Want a burger at 9am? Sure, why not.

I opted for a stuffed pepper meal that was apparently a local dish, and I loved it. The peppers were like none I have ever tasted, the tiniest bit spicy and the tiniest bit sweet, and a pale green color. They were stuffed with grounded beef and rice, and the whole thing was in a little bit of tomato sauce with some potatoes. I ordered it both days.

So if you happen to be visiting Peje, Kosovo, I highly recommend Hotel Semitronix.

Exploring Kosovo was a surprise. It’s not packed with mind-blowing attractions, but it’s well worth a visit to learn about the recent history of the region and to see how one small country can start again. 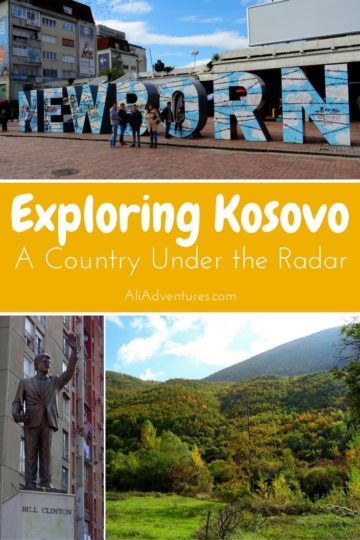 Sign Up
How Much Money I Make Online: Income Report December 2016 How Much I Spent Traveling in Kosovo