About a year ago, I decided to start a project as a way of having a not-so-travel-related goal. What I came up with was the Berlin International Restaurant Project. The objective is to eat at one restaurant for every country in the world in Berlin. It also has to be a new place for me, so for example, I had to find a new Mexican restaurant since I’ve already eaten at a bunch of them. Also, if a restaurant for a particular country just doesn’t exist, I obviously can’t check it off my list.

Originally I wanted to do at least three per month, but life doesn’t always work out that way. Sometimes we’re gone for several weeks. Sometimes I’m dealing with health issues and I’m less willing to eat things I shouldn’t.

But doing this project has been a good way to get me out of my rut. Andy and I have a tendency to find a few restaurants we like and rotate through them over and over again. By forcing myself to seek out other cuisines, we’re trying foods we normally wouldn’t even think about. These aren’t always the BEST places to find a particular cuisine in Berlin, but I’m ok with that.

One of the first places we tried was a Russian restaurant not too far from our apartment. Andy’s parents were visiting for Christmas last year, and we took them there for lunch one day. Andy’s dad learned Russian when he was in the military, and he has recently started picking it up again, so we thought it would be fun to go to this restaurant with them. 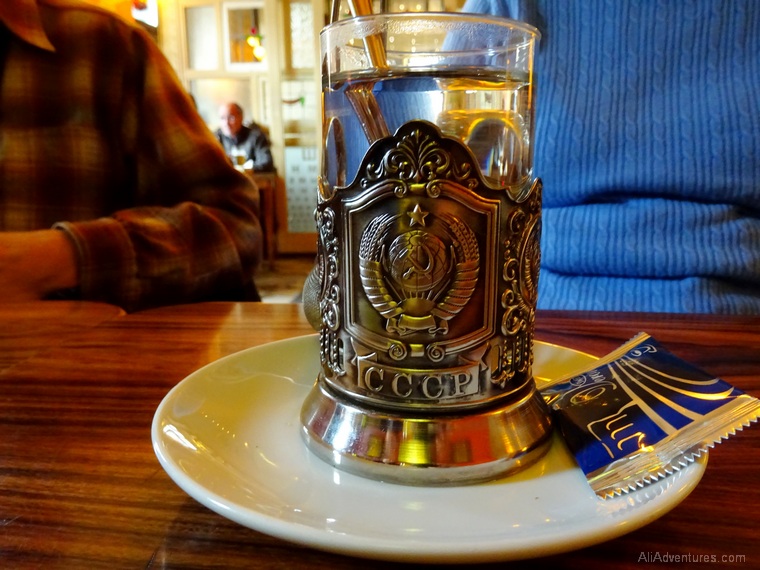 I ordered something called Tschachochbili, which was chicken in a tomato-onion-wine sauce, though it looked more like stew or a thick soup. I skipped the bread but it was still more food than I could eat. 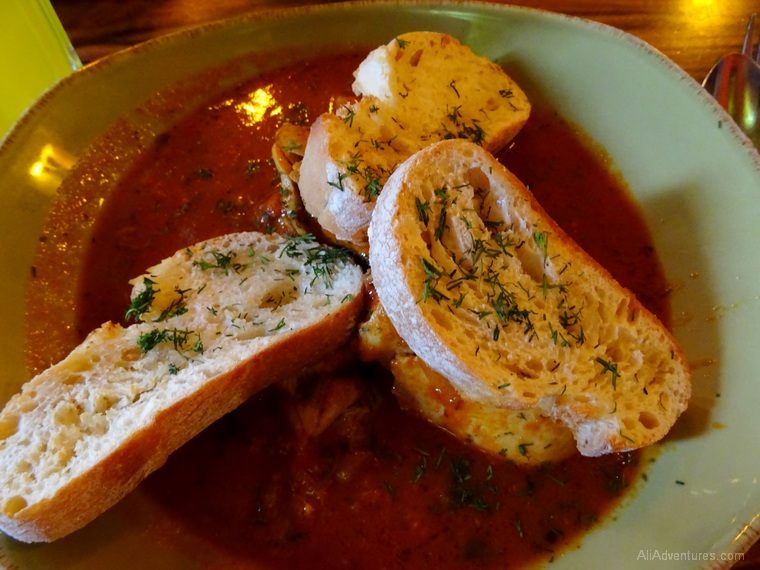 Andy ordered Solyanka, a soup made with smoked meat, sausages, olives and sour cream. His dad got Blini, which are thin Russian pancakes with different kinds of fillings, and tea in a traditional metal and glass mug. 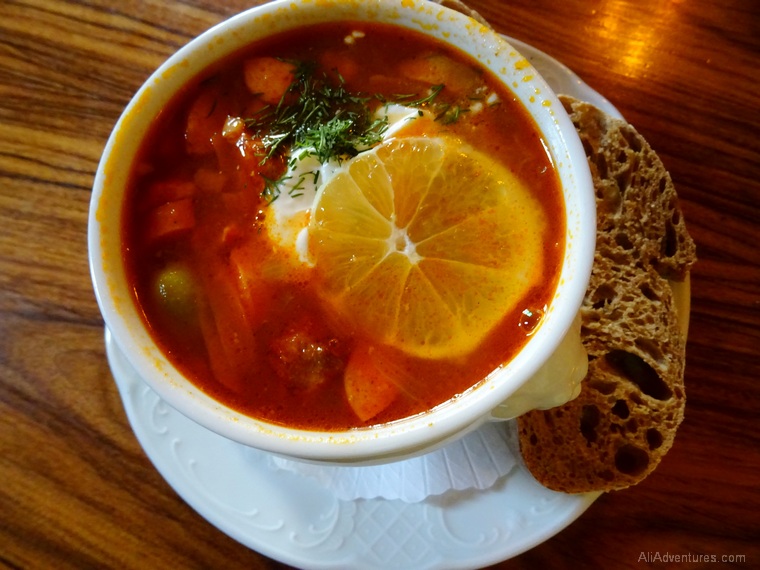 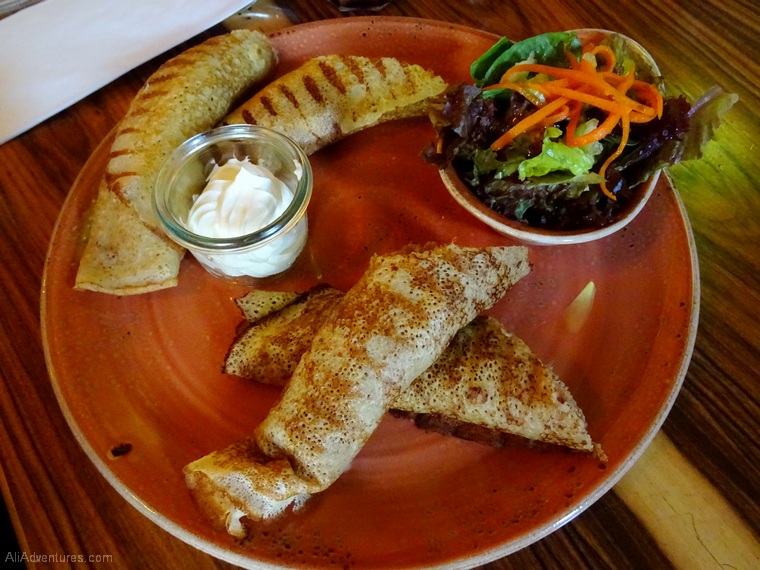 Our friend Henry, who comes to Germany pretty much every year, was in town around the time I started this project, so when the three of us went looking for dinner, we looked for a new restaurant to try. We ended up in a Vietnamese place in Prenzlauer Berg. It was tasty, but not so good that I’d go out of my way to go back. There are just too many Vietnamese restaurants in Berlin to want to even go to another neighborhood unless it’s amazing. 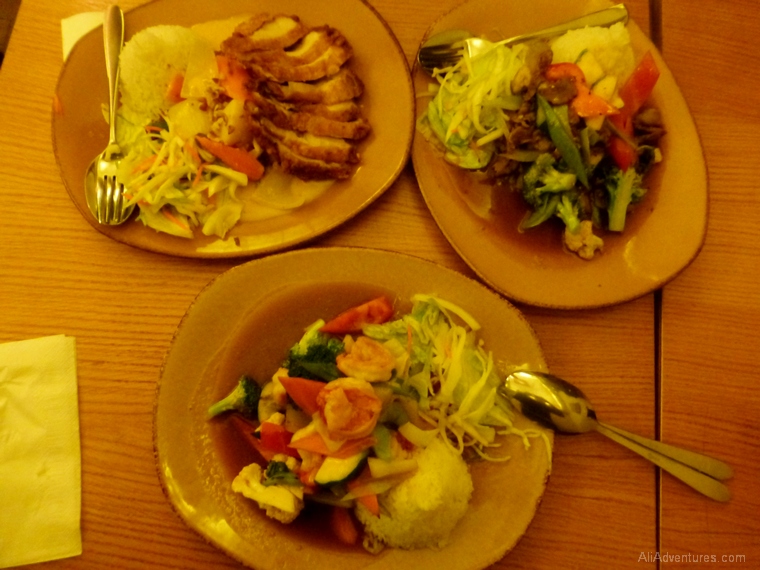 Regardless, our food was pretty good, and if you’re in the area, it’s not a bad option. Henry ordered some spring rolls, and we each ordered different dishes with chicken, beef, and shrimp, and tasty sauces, though I couldn’t tell you now exactly what we ordered. (I didn’t think I’d be writing about this back then, but these posts will get better going forward.) 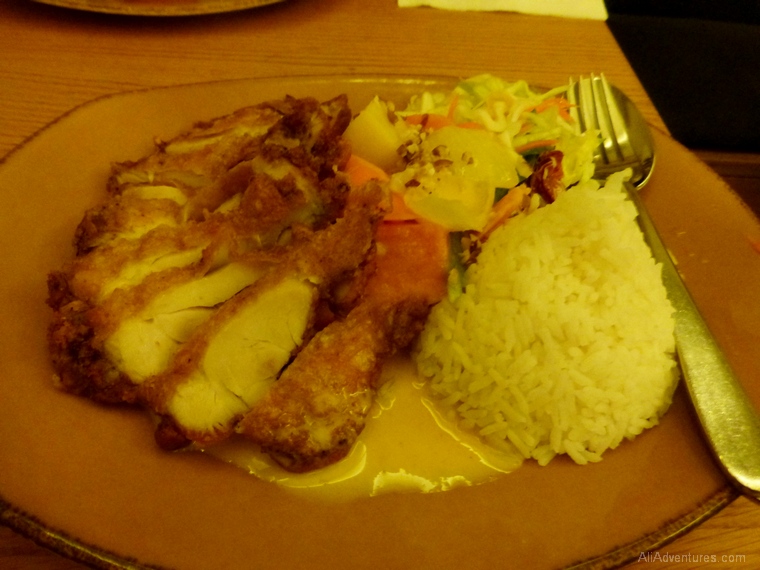 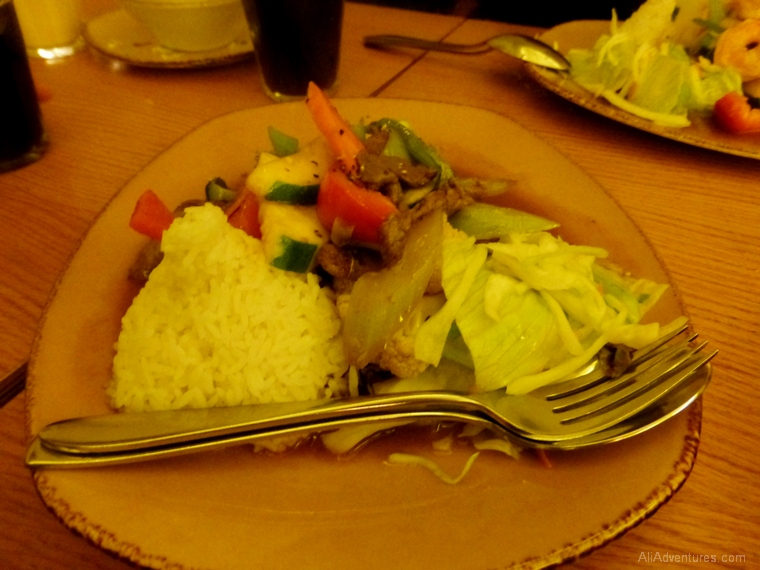 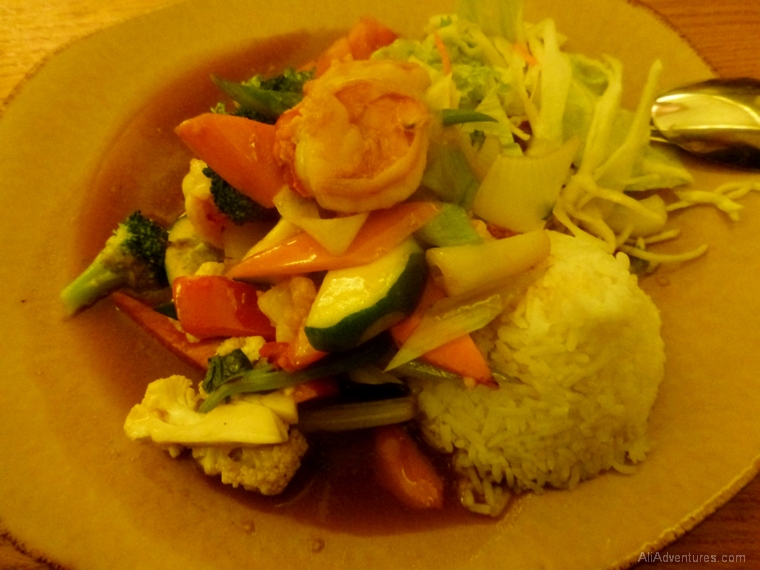 Now Sudanese food is certainly not something I would’ve ever looked for before starting the international restaurant project. But there’s a little Sudanese restaurant near a tram stop we use often, so we decided to try it.

They had fried bananas on the menu, so we tried them to start. It came with peanut sauce and some salad veggies, and despite the fact that Andy doesn’t like bananas, he did enjoy this dish. 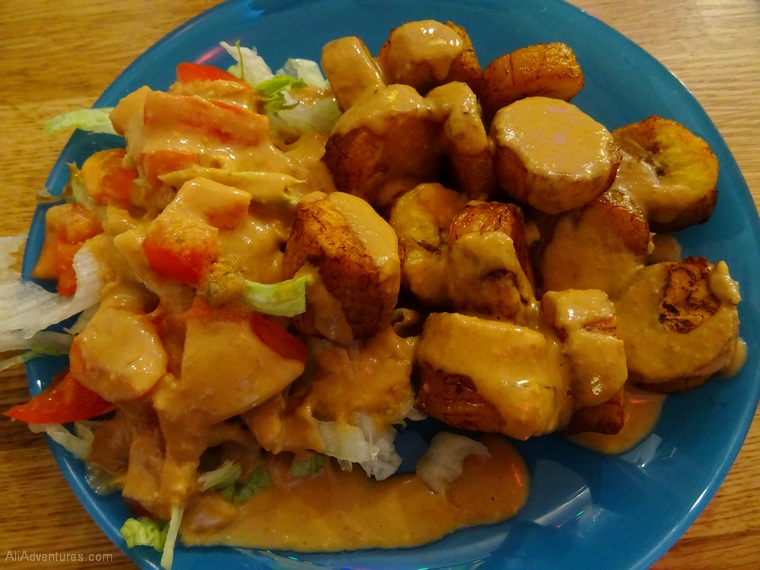 For a main dish, we split a mixed grill. There were several different kinds of meat, veggies, cheese, and more peanut sauce. There may have been some potatoes, too. Then we had a couple little dessert things that I can’t identify right now, but I do remember they were mildly sweet and quite good. 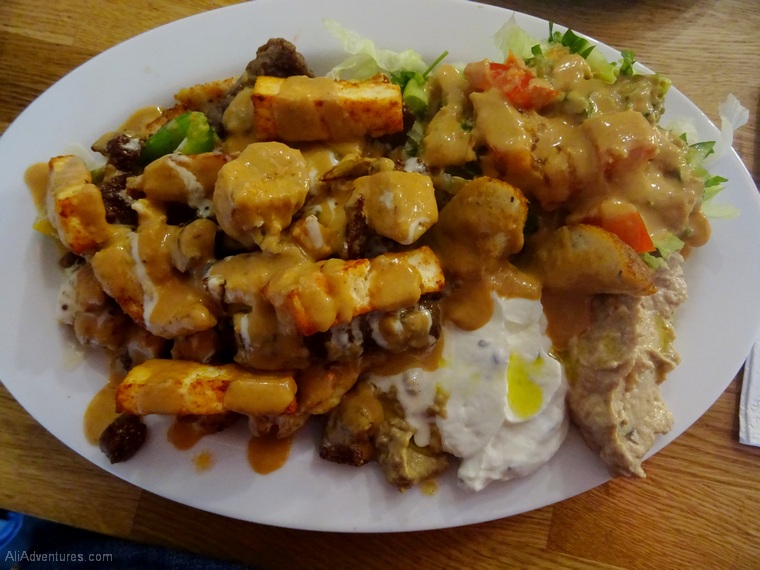 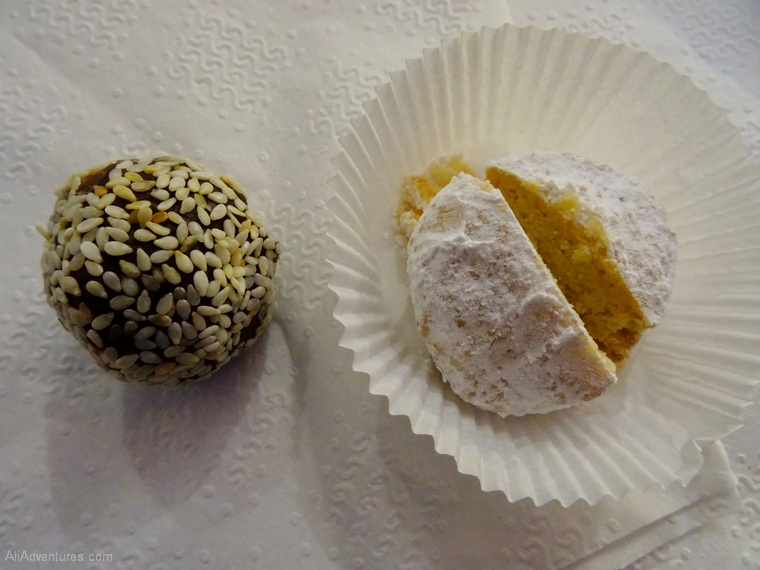 We left saying we enjoyed the meal enough to go back, but so far we haven’t. I guess our go-to Thai, Vietnamese, and Mexican restaurants still win out.

I have several more restaurants to tell you about next time. I think it’ll take me years to get through as many countries as are represented in Berlin, but I’m looking forward to the challenge. I’m not going in any particular order, and I’m trying to seek out tougher countries to mix in with the easier ones.

Know of an obscure cuisine in Berlin? Have any restaurant suggestions for me? Let me know in the comments! 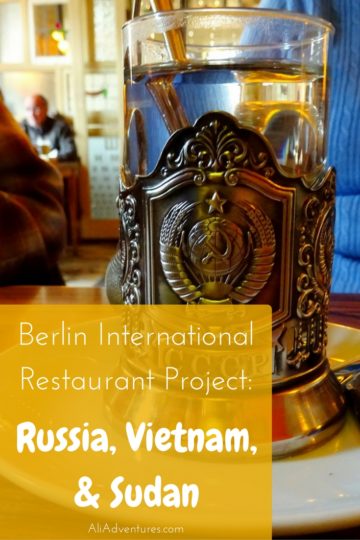 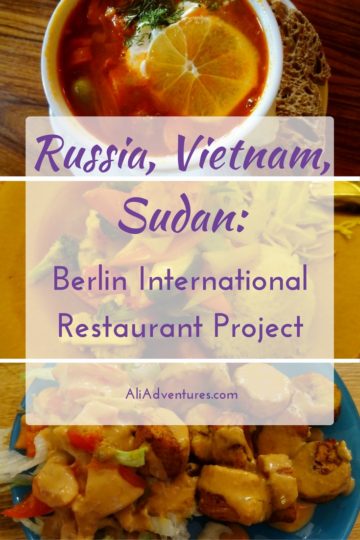 Sign Up
How Much We Spent Traveling in Warsaw, Poland On Living a Non-Traditional Life