The sun was beating down on the hoards of people waiting to get through the gates, but luckily our small group had found some shade under a tree. As we waited out the unexpected delayed opening, our Walks of Italy tour guide told us the history behind Pompeii. I realized as she was talking that I knew very little about the site, only that it was a city buried in ash and preserved for centuries. But there’s a lot more to it than just that, which we learned on our Best of Pompeii tour.

The eruption that covered Pompeii

The eruption of Mt. Vesuvius occurred in the year 79AD. I always imagined it happened very quickly since people were buried as a result, but it turns out it was a slow 19 hour eruption followed by days of ash polluting the air. Plenty of people had time to escape, but those who stayed suffocated from the fumes or were killed when roofs collapsed. 300 bodies were found on a nearby beach, people who had been waiting for ships to come and save them, but they were killed quickly by the heat. Some survivors returned to Pompeii but eventually abandoned their city. 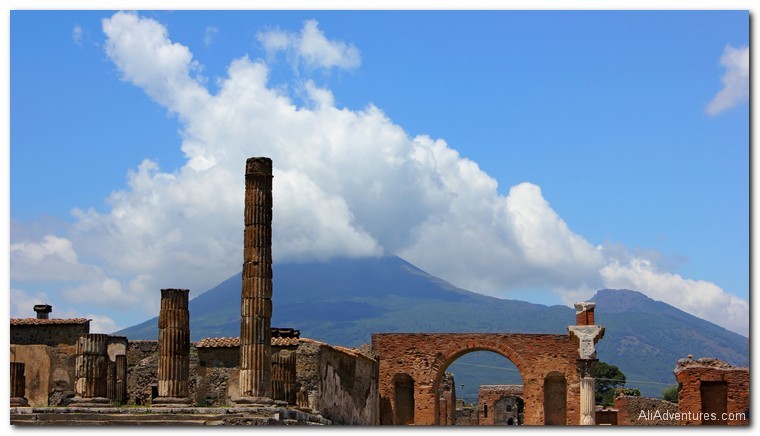 Imagining Pompeii as it was

I tried to imagine what the city must have been like nearly 2000 years ago. While some of it is in ruins, because of the volcanic ash that covered it for so long, it’s one of the most well-preserved sets of ruins I’ve ever seen. I could really picture the shops selling goods as our guide pointed them out to us. I could (unfortunately) imagine stepping on the raised stones in the middle of the road in order to cross without walking through shit. 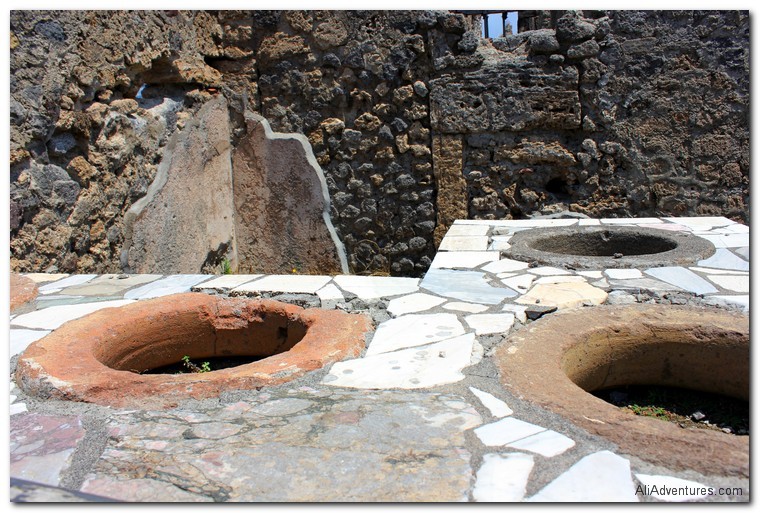 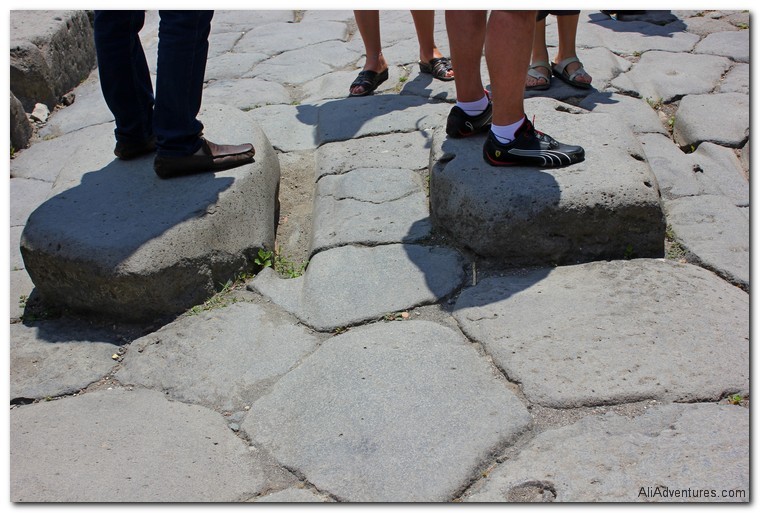 The home of a wealthy Pompeii citizen

We also got a chance to walk through a home, which had obviously belonged to someone wealthy, due to its size. There was a hole in the ceiling, like a skylight, for collecting water. The center was an open courtyard area, and the windowless rooms were built around the sides facing the center. The people of Pompeii had frescoes painted on their walls, many of which have at least partially survived for thousands of years. 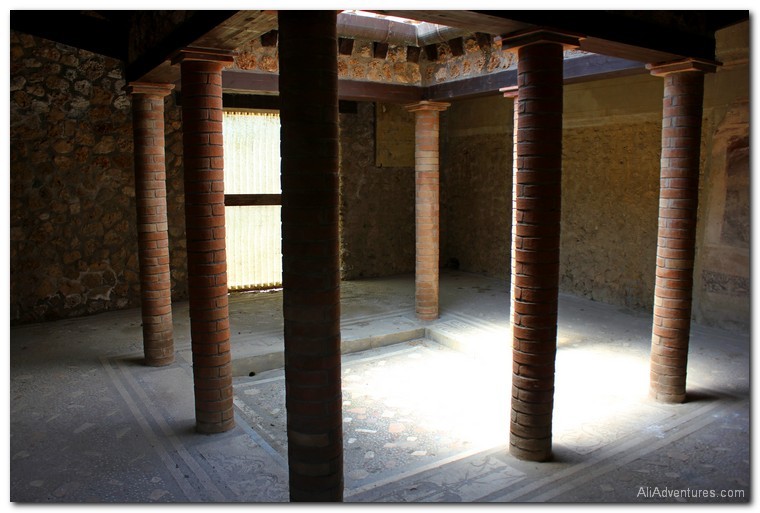 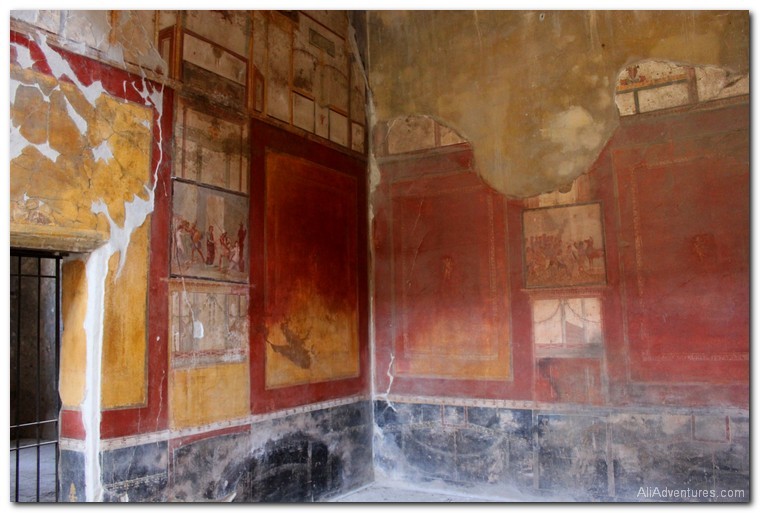 A little later in the tour, we walked through a building that was a bath house and a gym. People would come here nearly every day to exercise, sit in the sauna, and bathe. Since these were naked activities, there were little holes for people’s belongings, sort of like lockers. The men would work out in the grass, and the sauna and bathing areas had separate sections for men and women. Even the slaves were allowed to bathe after hours.

The bath house was also where a few plaster molds of bodies were on display, which was interesting but a bit creepy. 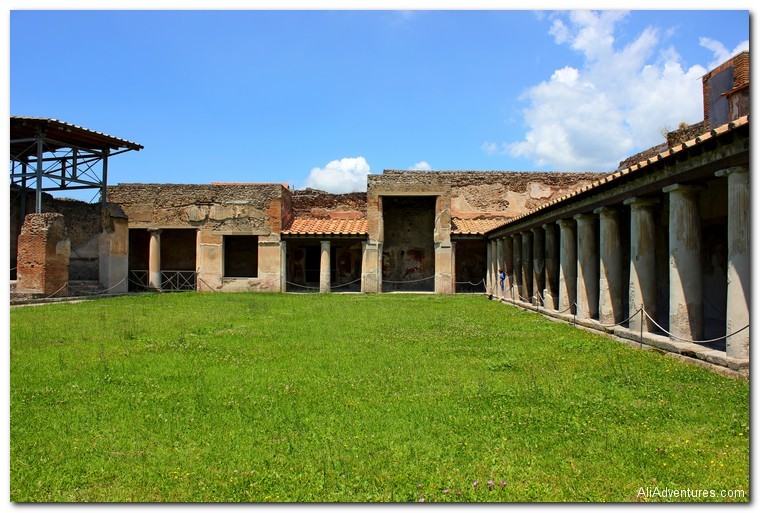 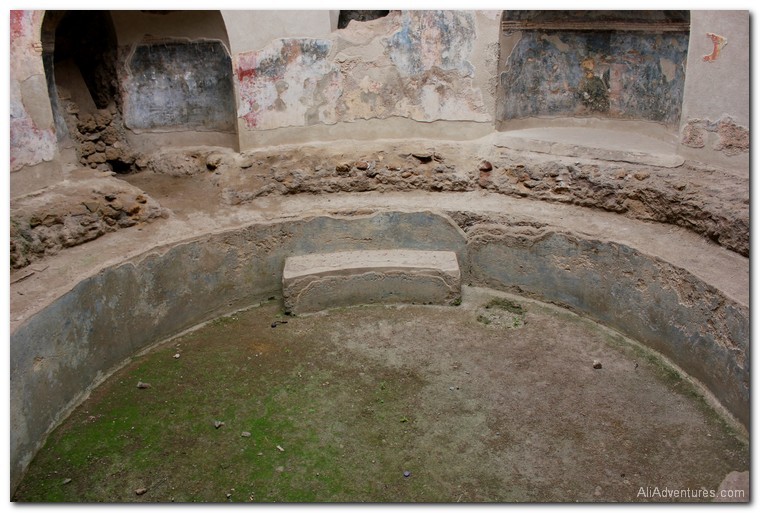 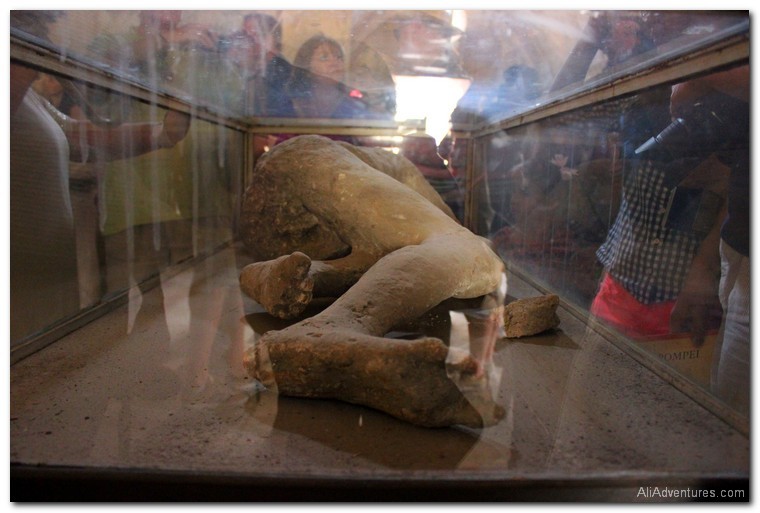 A final look at Pompeii

As we were getting ready to head back to Naples, Andy and I noticed lots of people stopping on the stairs that were going towards Pompeii’s exit to take pictures.

It turns out it was a pretty nice view of the outer edges of the Pompeii site. I liked seeing a broader view like this after spending a few hours looking at all the smaller details of the ancient city. 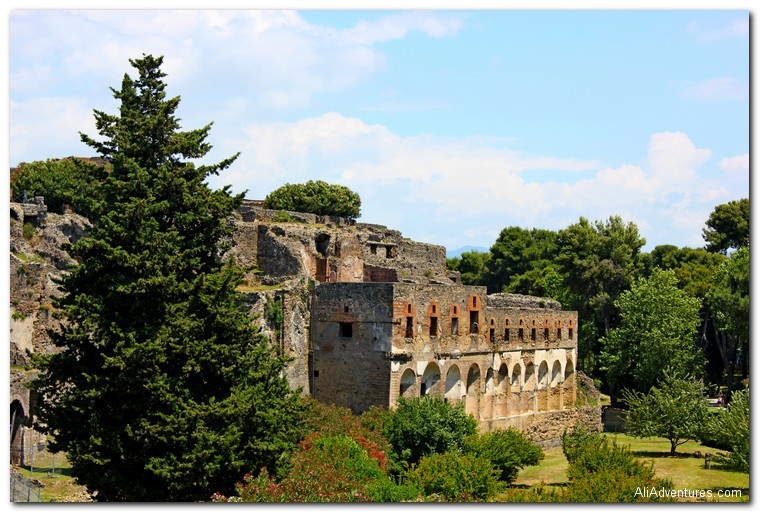 Pompeii is huge. HUGE. We spent about two hours wandering through at a fairly fast pace with our guide and still barely scratched the surface. We could’ve stayed longer to explore more on our own, but in the hot midday June sun, we decided to call it quits. I’d highly recommend scheduling your visit in the spring or fall if possible to avoid the heat. Either way, bring lots of water, sunscreen and a hat. 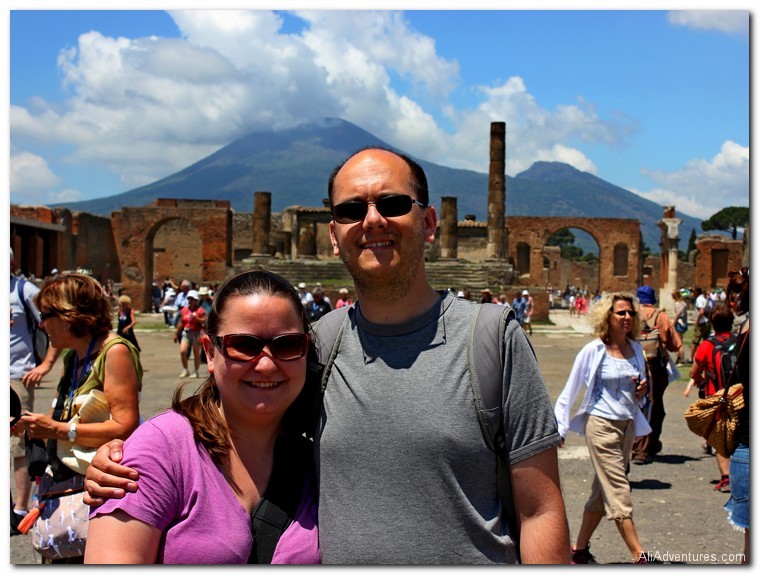 Traveling to Italy? Pick up a copy of the Unconventional Italy Guidebook, which includes 100 interviews with locals who share their insider tips with you.

While I was happy visiting the ruins of Ephesus in Turkey on our own, I’m so glad we went to Pompeii with a guide. Ephesus is much smaller and there’s basically one major road going through the ruins, so it’s easy to navigate. Because Pompeii is so big and so many of its streets have been preserved or restored, you could easily get lost in there. Plus there aren’t any signs explaining things, and apparently they run out of maps early in the tourist season as we were not able to get any.

To get to Pompeii, take the Circumvesuviana train from Naples or Sorrento. Tickets were 5.80 euros per person round trip when we were there in June, and the journey from Naples takes about 30 minutes.

Thanks to Walks of Italy who provided us with a complimentary tour. As always all opinions are my own.

Sign Up
The Bells That Mark Time in Minori, Italy Vatican City and Sistine Chapel Tour