The Vatican – Smallest Country in Europe

I have now visited three times, and even though it’s a very interesting place filled with stories of scandals and beautiful art, I think three times might be my limit for the smallest independent country in the world.

>>We took this Early Entry Sistine Chapel and Vatican tour and it was worth the early wake-up time.

The Principality of Monaco is 0.78 square miles (2.02 square kilometers) and borders only France and the Mediterranean Sea. It is the second smallest nation in Europe and the second smallest country in the world. With a population of over 36,000, it is the most densely populated country in the world. The tiny country is known for casinos and Formula One racing. Monaco does not charge income tax, has the highest number of millionaires and billionaires per capita in the world, and has 0% unemployment. It is NOT a cheap country.

I visited during my first trip to Europe in 1994, and all of those pictures are film and stored in my parents’ basement. Even though Andy and I planned to take a day trip there from Nice in May, we were exhausted and decided to skip it. But we did catch a glimpse from the train on our way to Italy.

Another tiny nation completely surrounded by Italy, San Marino has an area of 23.6 square miles (61.2 square kilometers). It is the oldest republic in the world and the third smallest country in Europe. When Garibaldi was uniting Italy, he left San Marino along because they let him seek refuge there when he was fleeing from the Austrians a decade earlier.

Andy and I visited San Marino in June on a day trip from Rimini, Italy. The views are amazing from the high perch of the capital city. Definitely worth a trip if you’re in the Emilia Romagna region of Italy.

>>Read more about the oldest republic in the world.

The country of Liechtenstein is sandwiched between Switzerland and Austria. Its area is 61.78 square miles (160 square kilometers), making it the fourth smallest country in Europe. It does not have a train station, but you can easily reach it by bus from the nearby train stations in Austria and Switzerland. It is one of only two countries in the world that is doubly landlocked (Uzbekistan is the other one), meaning it is surrounded by only other landlocked countries. Liechtenstein uses the Swiss Franc as its currency. This small country is the world’s largest producer of false teeth.

Andy and I went to Liechtenstein shortly after I moved to Germany. Our apartment was still undergoing a few remaining renovations, and we needed a break. Once we got out of the capital city of Vaduz, the country was very charming and beautiful. We’re normally city people, but being up in the quiet mountains of Liechtenstein was really nice.

Malta is an island nation in the Mediterranean covering about 122 square miles (316 square kilometers) which is just a little smaller than the city of Atlanta. It’s the smallest country in the EU, and the fifth smallest country in Europe. It includes three inhibited islands, Malta, Gozo and Comino, plus a handful of uninhibited islands. It is south of Sicily, east of Tunisia, and north of Libya. Malta has two official languages, Maltese and English, and it gained independence from the UK in 1964.

A friend of mine married a guy from Malta several years ago, and when they went back to Malta to have a church wedding there, she asked me to be in the wedding. I spent my time discovering Gozo, the secondary island that makes up the country of Malta, since that’s where he was from. I’d love to go back and see more of this small country someday since I didn’t get to do much sightseeing.

Calpurnia – but not really
Since so many of you arrive at this post searching for info about Calpurnia in Europe, I wanted to clear things up. The country of Calpurnia is not one of the smallest countries in Europe. In fact, it’s not a real country at all. I’m guessing you recently watched this movie, which takes place in the made-up country of Calpurnia. Anyway, I hope you’re enjoying my list of the smallest countries in Europe – the real ones!

Andorra is a mountainous country in between France and Spain. This European country is slightly larger than Malta with an area of 180.7 square miles (468 square kilometers). It is the sixth smallest country in Europe, and its capital, Andorra la Vella, has the highest elevation of any European capital. The official language is Catalan, although Spanish and French are widely spoken as well. Andorra is mostly known for shopping due to its duty free status and skiing in the Pyrenees in the winter months. There are no airports or train stations, so to get there you either have to drive or take a bus.

Andy and I made a short one night stop in Andorra last summer before continuing on to Barcelona. It was interesting to me that even in the touristy areas, signs were in Catalan, Spanish and French, but no English. Just like with Liechtenstein, we thought the country was much nicer outside of the capital city.

>>Read more about our Andorra adventure.

Locked in between Belgium, Germany and France, Luxembourg has an area of about 998 square miles (2,586 square kilometers) and is the seventh smallest country in Europe. This is still more than 200 square miles smaller than the state of Rhode Island. Luxembourgish, French, and German are the official languages. Each language is used in different levels of school and each one serves a different purpose in society, so most people speak all three. Just one of many interesting facts about Luxembourg.

This was where Andy and I started our trip in May. Though we did enjoy seeing Vianden Castle, we were not so impressed with the rest of our time in this small country. I’ve heard it’s a great country for hiking and other outdoor activities, though the capital wasn’t our thing.

Cyprus is the 8th smallest country in Europe and is located in the southeastern corner of the Mediterranean Sea. It covers an area of 3,568 square miles, and it’s the third largest island in the Mediterranean after Sicily and Sardinia. While most of the world recognizes the entire island as one country, the northern section (about 1/3 of the island) considers itself the Turkish Republic of Northern Cyprus. However, Turkey is the only country in the world that recognizes Northern Cyprus as a separate country. Greek is spoken in the south, and Turkish is spoken in the north. The euro is the official currency of the south, but the north uses the Turkish lira.

I traveled to Cyprus a few years ago when I was getting impatient with Berlin’s long winter. I spent 8 days in Cyprus visiting four cities in the south and one in the north. It was a gorgeous country with lots of ruins and castles and a stunning coastline. Cyprus is also one of the warmest countries in Europe, so I might return if I need another quick break from cold weather.

>>Read How Much I Spent Traveling in Cyprus.

At 4,212 square miles, a little smaller than Connecticut, Kosovo is the 9th smallest country in Europe. But like Cyprus, it’s a controversial one. Kosovo was once part of Yugoslavia, and afterwards, part of Serbia. In February 2008, Kosovo declared its independence from Serbia, but Serbia (along with a handful of other countries) still does not recognize this declaration. During and after the conflict in the 90s and 2000s, the US did a lot to help Kosovo. The country still remembers this, and today in Pristina, the capital, you’ll find a statue of Bill Clinton, and streets named for Clinton, George Bush, and Robert Dole. For such a small country, it’s packed with history.

I only spent 4 days in Kosovo, but it was a fascinating 4 days. The people were incredibly friendly and helpful, and everything was inexpensive. I visited 3 different cities, and each was unique. My trip was at times devastatingly sad, but at other moments, it was heartwarming to see how the people are working through such a traumatic past. If you get the chance to visit the newest country in Europe, I recommend it.

>>Read more about Exploring Kosovo: A Country Under the Radar.

Montenegro covers an area of 5,333 square miles and is the 10th smallest country in Europe. This is about 500 square miles bigger than Connecticut. It was once part of Yugoslavia, and from 2003 to 2006, it was part of country of Serbia and Montenegro. Unlike Kosovo, Montenegro split from Serbia with no objections. Despite being such a small country, Montenegro’s landscapes range from rugged mountains to seaside beaches, and you can even find one of the last remaining rain forests in Europe here. The official currency is the euro, but Montenegro is not in the eurozone and does not print or mint any of the currency.

While planning a trip to Bosnia a few years ago, I decided to add on 4 days in Montenegro since the countries border each other. I spent 2 days in Kotor and 2 days in Budva. Both were gorgeous, but I liked Kotor’s old town better. If you’re up to the challenge, hike up the hill to the castle that overlooks the town. It’s more than 1300 rocky, uneven stairs to the top, and I only made it up about 1/3 of them. Montenegro is one small European country I’d love to return to someday.

>>Read about Kotor and Budva: How I Spent 4 Days in Montenegro.

More interesting facts about the smallest countries in Europe

I hope you’ve all enjoyed this journey through the 10 smallest countries in Europe. Though these countries are all very small, they pack a lot in. Each has its own culture and history, and a unique place in Europe. Some, like Andorra, are a little more difficult to get to and require a little more planning, but then there’s the Vatican right in the middle of Rome.

It’s hard to really grasp how small they are or understand much about their history without visiting, and I’d highly recommend traveling to at least a few of them. I’m trying to curtail my list-ticking tendencies these days, but I’m happy to have been to the smallest countries in Europe. 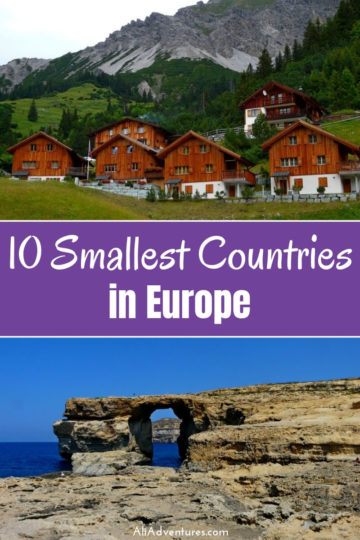 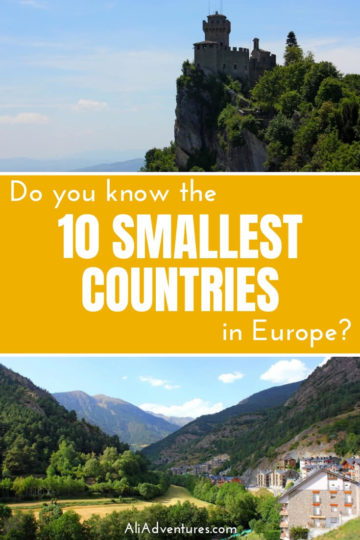