Every winter Andy and I go somewhere warm for at least a few weeks, ideally even longer. We’ve done everything from 2 weeks in Hong Kong and Macau (exactly during their cold snap unfortunately) to several months in Italy and Spain, from almost 2 months in Southeast Asia to 2 one month trips to Central America. But we never seem to get it right. 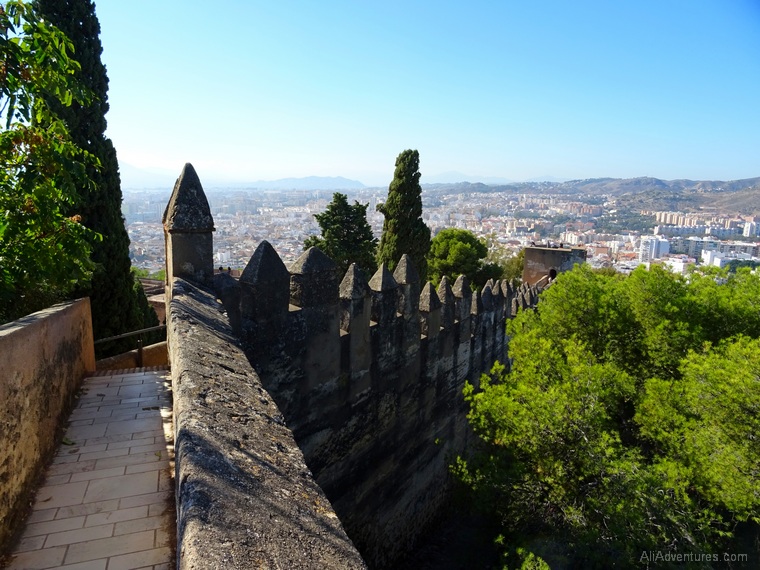 This year we decided to just go for something warm. Nothing too adventurous, just warm weather and relaxation. So we booked flights to the Canary Islands. But somehow, even weeks after booking those tickets, we couldn’t bring ourselves to book anything else. We weren’t excited about the Canaries. Finally we talked it through and realized our hearts just weren’t in it.

We need something else. Something that meant more for us in the long term.

Because if Berlin is going to be our home, I need some serious winter escape every year to maintain my sanity. And we decided that might mean spending most winters in the same place for stability and the feeling of home. Even if it’s just home for a few months each year.

This led us to mainland Spain instead of the Canaries. Spain is one of our favorite countries, I speak better Spanish than German (yes, still), and we enjoy the food. Somehow even the fact that the country is in the wrong time zone, meaning the sun still goes down pretty late even in the winter, is a big plus.

Our experiment involved spending a month in southern Spain with one week in each of 4 cities. But one week is not enough time to explore, enjoy, and get a feel for a city, plus work, plus relax, plus take a day trip in each place. I mean, we knew this, but still, we manage to forget every time we go on a trip where we’ll have to work at the same time.

One week in Malaga

We landed in Malaga after almost two weeks in Bologna, Italy, where it had been rainy and cold almost the whole time. Warm, sunny Malaga was a breath of fresh air.

We really enjoyed our time there. There were fun restaurants and tapas bars near our apartment, so it was easy to find plenty of good food. It wasn’t the best apartment – the windows didn’t seal, which let in cold air and noise at night – but it was in a great location just beyond the boundary of the old town.

The old town is really cute and big enough to feel like there’s a lot on offer but not overwhelmingly big. We spent a day exploring the castle and palace, two of the biggest attractions in the city. And we wandered through little streets and alleyways to get a feel for the city.

We also booked this fun food tour in Malaga, one of our favorite things to do in any city we visit. This tour introduced us to Moscatel, Pedro Ximenez, and Vermouth, delicious liquors from the region. Some of my other favorites from the tour included garlic shrimp and a big meatball with almond sauce.

Overall, Malaga was a fantastic city that really surprised us. Even though I had been there before, visiting again was a great experience. It turned out to be our favorite city of the whole trip.

One week in Sevilla

Several years ago, we spent a little over a month in Sevilla. It was enough to show us we liked the city, even though the apartment we rented was too far away from the center. So this time we decided to give it another try with a better location. The neighborhood was better, but still not quite right.

We found decent food nearby, but it was still too far from areas where we might consider staying for a 2-3 month period. It was a fun week, but we struggled to feel productive since we were still quite far from the people we know who live in Sevilla, so we lost a lot of time getting to them. And the center of the city felt chaotic and loud, with odd sidewalks that often disappeared when we turned around a corner.

We also took a food tour in Sevilla which included more Vermouth and a unique orange wine that I loved. Some of the food we tried included meatballs with mint sauce and other Moroccan influenced foods. And of course jamon. Always ham.

Some of the not-so-touristy neighborhoods we explored look really fun. We just didn’t have enough time to get a good feel for those areas. So it’s hard to say whether we’d want to give Sevilla a third try.

While Granada is a great city and a must for any Andalucia itinerary, we didn’t really need to go back there again. But while talking to some friends who live in southern Spain, they said that was the easiest town to meet up in since they live in a very rural area. So we spent 2 nights in Granada to hang out with our friends, and we ate lots of tapas.

You can get tapas all over Spain, but I think Andalucia does it the best. And aside from that, Granada is especially unique because when you order a drink, they just bring you free tapas. It means you’re a little more at the whim of the restaurant, but you can still tell them if you have an allergy or your vegetarian or something like that. And hey, free food!

Almeria isn’t on the radar for most people. We sort of randomly ended up there because it had a cool castle, but it turned out to be one of our favorite stops during our time in Spain.

On our first day, while looking for lunch, we stumbled into the oldest tapas bar in town. It was packed with locals and seemed lively, so we walked in, squeezed into the end of the bar, and started ordering. The food was delicious and simple. The restaurant was unpretentious and oozed history. This ended up being our lunch spot for 3 lunches, and it was great to be recognized by the bartender.

It turns out, Almeria was named Spain’s gastronomy capital for 2019. So everywhere we went, there was a focus on food. Their fresh market was fantastic, and if we had been there longer, I would’ve really enjoyed shopping there. We also ate at a more modern tapas bar for dinner a couple times that was completely different from the oldest tapas bar in the city, but had its own delicious twist on food.

And that castle that brought us to the city? Well, it was pretty impressive, and I definitely recommend visiting. Entrance was free, always a bonus.

Overall, Almeria was a cute city with a good vibe. I’m not sure I’d want to spend 2-3 months there, but I would definitely go back for a long weekend or even a week.

One week in Cartagena

From Almeria, we left the Andalucia region and went east to Cartagena. Unfortunately we both got sick with colds, so we didn’t explore as much as we normally would. The old town was pretty but felt dead. Maybe it was the time of year, but it just wasn’t very lively. We struggled to find decent food, and many restaurants in both touristy and non-touristy areas had such bad reviews, we were reluctant to eat out much.

Cartagena is home to Licor 43, a Spanish liquor I’ve been in love with since I did study abroad in Spain in 2000. They offer tours, so we signed up, and it was fun and included several tastings. Unfortunately it’s not too close to the center of town and there’s no public transportation. We took a taxi to get there, but with no plan on how to get back afterwards. Luckily we were able to hitch a ride with Dutch group to get back to town.

The other big attraction in Cartagena is the Roman theater. It was pretty impressive to see and right in the center of the city. At night it’s lit up, so it’s worth wandering over after hours as well as visiting during the day.

We were in Cartagena in the lead up to Carnivale, which meant different groups were practicing for the parades a few nights while we were there. The parade route went by out apartment, so we got to watch from our kitchen window.

Cartagena is a pretty city, but ultimately it was our least favorite of the four cities we spent a week in.

One week in Alicante 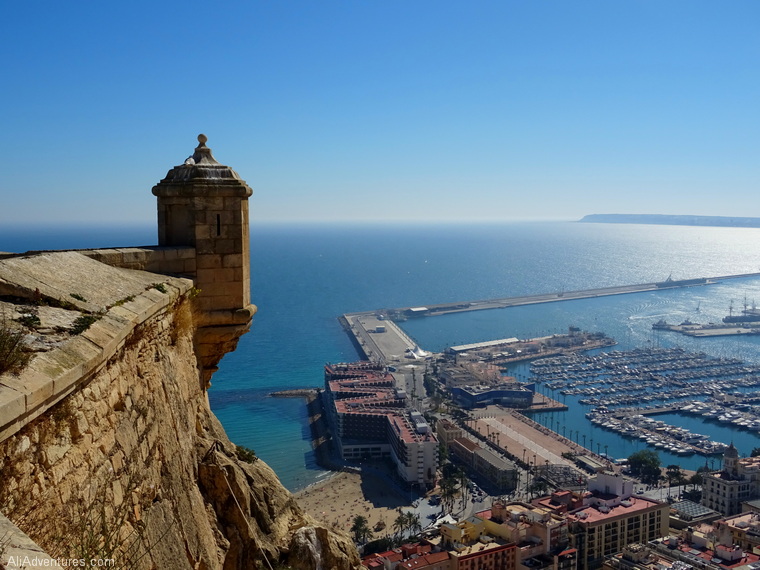 The last stop on our tour of southern Spain was Alicante. It was slightly easier to find food here but still not amazing. Andalucia simply does tapas better. It’s a coastal beach city, so there were many more tourists, which also meant more touristy restaurants, including one selling paella, tapas, and other Spanish food, Mexican food, pizza and Italian food, and Indian food. Yikes.

Our apartment was right on a small square with a couple of decent tapas bars. It was nice to hang out with a drink and some food and enjoy the warm weather as our time in Spain wound down.

Near the coast sits Alicante’s castle. It’s pretty high up, so for a small fee, you can take the elevator. It was fun to wander around, explore the castle, and enjoy the sweeping views of Alicante and the sea.

Alicante is a nice city, definitely a good choice for beach-goers, but not a good fit for us for a long winter escape.

I went into this winter almost positive Sevilla would win out. Not only is it a gorgeous city with great food, but we know a handful of people who live there.

But Malaga surprised me. Despite this being my second visit, I really fell for the city. I’m not a beach person, which is why lots of people go to Malaga, but I do enjoy being near the sea. The restaurants in the old town are mostly unimpressive, but you don’t have to go far from that area to find authentic and delicious tapas. We explored several fresh markets that we adored, so we’d definitely have access to good groceries as well.

It’s also nice that Malaga has a decent airport with direct flights to Berlin. This wasn’t a deciding factor, but it certainly helps.

So while nothing is set in stone for this coming winter, our current plan is to spend about 2 months in Malaga, followed by a few weeks of travel in Portugal. I really love Berlin, and I’m hoping escaping the worst of the winter will help me enjoy the city more.