How Much We Spent in Bologna, Italy

This year, our winter escape started off a little unconventionally for us. We had been planning on spending a month in Spain, but nothing was really set in stone yet when our friends Stephanie and Michael sent out an email looking for dogsitters for 2019. They live in Bologna, Italy, which is one of Andy’s favorite cities, and I simply love dogs, so I convinced Andy we should go for it. We ended up spending 10 nights in Bologna, two at a hotel and eight dogsitting. Here’s a look at how much we spent in Bologna. 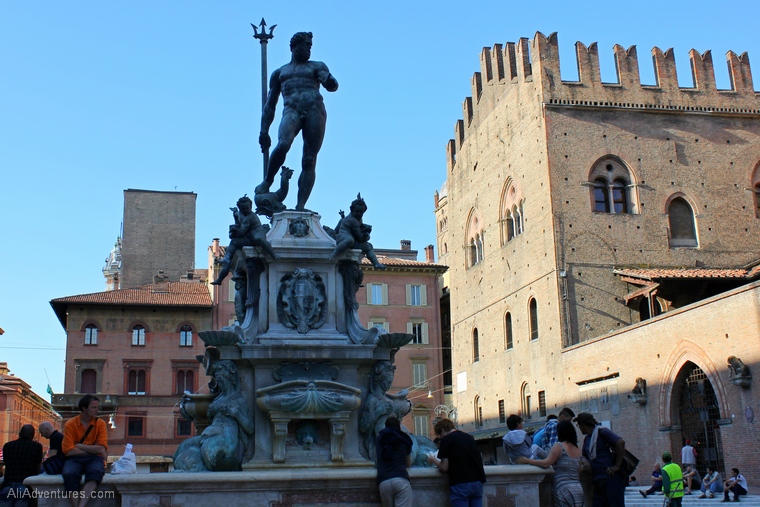 Amounts are listed in euros and US dollars. The expenses listed are for two people for 10 nights in Bologna, Italy. This does not include the cost of getting from Berlin to Bologna.

As I mentioned, we were in Bologna to watch our friends’ dog, so we got to stay at their place for free. But we paid for a hotel for two nights when we first arrived, and it was such a cute B&B. It was walking distance from the train station and the center of the city, and breakfast was included. For two nights in Bologna in a hotel, we spent $105.50 per night, or $52.75 per person per night. 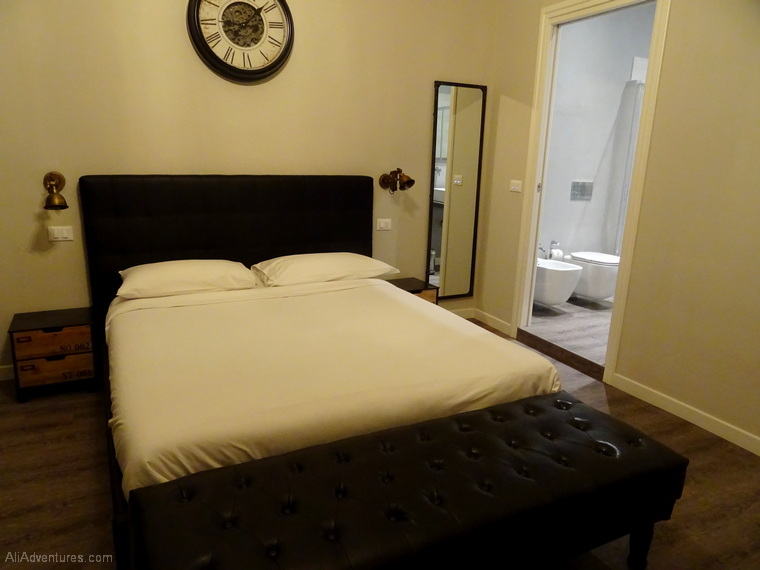 Where to stay in Bologna

Andy and I spent two nights at the Steam House hotel/B&B in central Bologna, and I highly recommend it. They only have a few rooms, so the atmosphere was cozy. Their check-in hours are more limited than a normal hotel, but we notified them ahead of time that we’d be arriving late, and someone waited for us. Normally they charge a fee for this, but they were in a generous mood and waived the fee.

The bed was comfy and the shower was fantastic. I also loved the decor of our room. I’d definitely stay there again if we ever return to Bologna.

Read reviews on Trip Advisor or book a room through Booking.com. 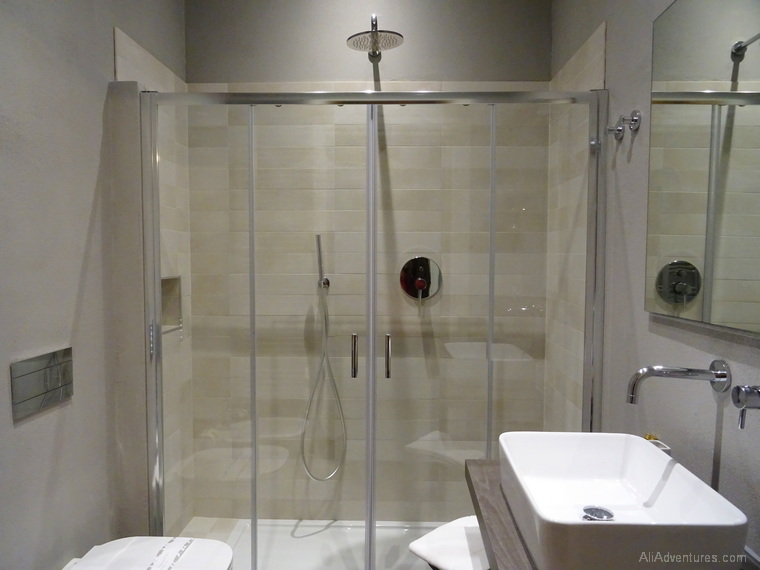 Bologna has a bus system, but the city is so compact, especially the central part where you’re likely to spend all your time. We never used the public transportation because we didn’t need it and chose to walk everywhere. We could’ve walked from the apartment where we were dogsitting to the train station, but it would’ve been a pretty long walk. Since it was early in the morning, we had our luggage, and it was raining, we decided to spring for a taxi. The taxi cost 13 euros (about $14.82), and our two train tickets from Bologna to Verona cost 20.60 euros total (about $23.48).

So clearly most of our expenses in Bologna were for food and alcohol. We had 8 nights in Stephanie and Michael’s apartment, which meant we had access to a kitchen and could cook, but we also wanted to eat all the delicious food in Bologna.

You gotta have gelato in Italy, right? Well, this place was pretty close to where we were staying, and we ended up going in every single day. It was so good! They even had a good selection of lactose free options. 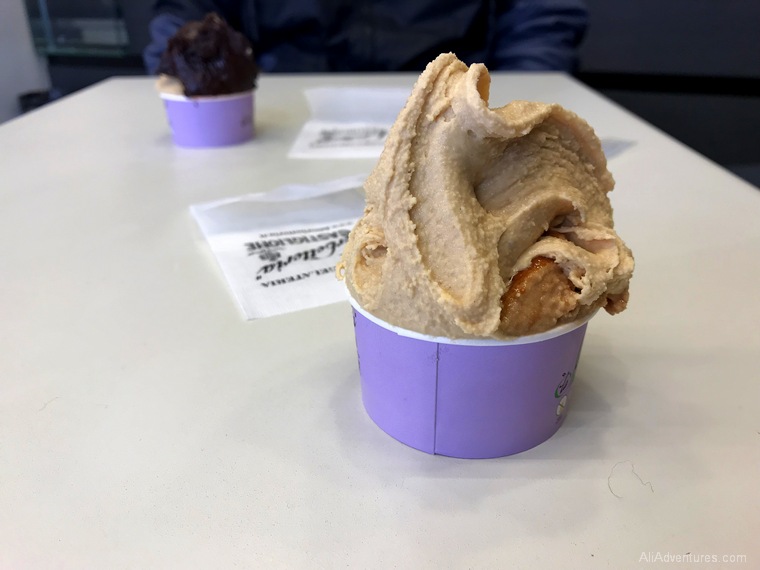 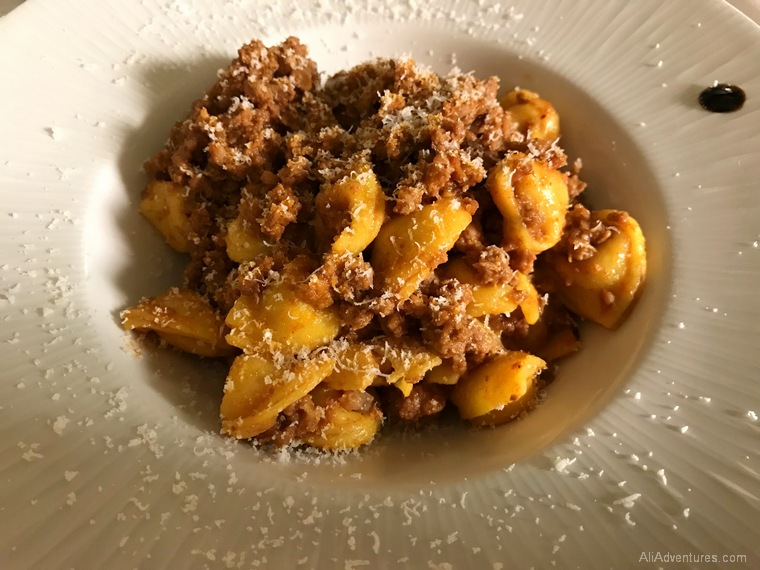 Apertivo is also a fun thing to experience in Italy, and it’s especially popular in Bologna. Usually you buy a drink and it comes with some free snacks, but some restaurants have more extravagant setups with a full buffet that comes with the cost of your drink. We did this one night, plus some other cocktails afterwards.

We may have also bought too much limoncello and chocolate to enjoy while snuggling with the dog on the couch. I promise we didn’t share any with the dog.

Our numbers are a little skewed for this trip since we had 8 nights of free lodging. (Well, free in exchange for picking up dog poo.) But if you were to look at the two nights we spent in a hotel plus two days worth of our food spending, you could reasonably expect to spend a little over $300 for two people for 48 hours in Bologna, plus transportation and any activities that aren’t free. Bologna isn’t terribly expensive, but it’s not super budget either, unless you’re eating piadinas and pizza all the time and skipping the alcohol. No matter what, this is a wonderful city that you should definitely include on your Italy itinerary, especially if you love food!

Sign Up
I Don’t Really Want You to Start a Travel Blog How Much We Spent in Verona, Italy