In preparation for my upcoming round the world trip, I realized I only had five completely blank pages left in my passport. Since some countries require at least two blank pages for their visa, I knew I’d need to get more pages added before my departure. Somewhat similar to the mileage run I did last year, I needed to plan a passport run to a US Embassy. I thought about going to Berlin for a few days since I’ve never been there before, but things got in the way and it just didn’t make sense to take off for a few days.

That left me with the US Consulate in Frankfurt or the US Embassy in Bern, both about two hours away by train. I mostly picked Bern because the appointment times meant I could sleep an hour longer (I’m talking about getting up at 4:30am instead of 3:30am) but after my day in Bern, I’m very happy that was my decision. Here are some tips and sights in Switzerland’s capital.

Bern is a small city, which meant getting to the Embassy was simple. Since I don’t always have the best luck with reading maps and I was paranoid about being late for my appointment, I took a cab from the train station to the Embassy. I do not recommend doing this! I easily could’ve walked in about 10 minutes, and Switzerland is expensive – the cab cost me 17.50 Swiss Francs, which is almost $20US.

The people at the Embassy were very friendly and helpful. When they called my name, the woman asked me if I wanted 24 or 48 additional pages put in my passport. Since the cost was the same (US$82) I took the 48 pages. Then I just had to wait about a half hour for the pages to be added. They actually get taped in with heavy clear tape, so now my passport is thick and looks a little strange, but at least now there’s lots more room for lots more stamps and visas! I was out the door before 10am and walked back to the train station to get my bag. Not wanting to waste the opportunity, I wandered around the city for a few hours to see what was there.

I found a small market selling fruits, vegetables, cheese, sausages, flowers, and a few other food stands with Mexican, Asian, and local food. I also saw a life-size chess set. There were people playing a game when I passed by later but I couldn’t get a good picture because of the small crowd watching. 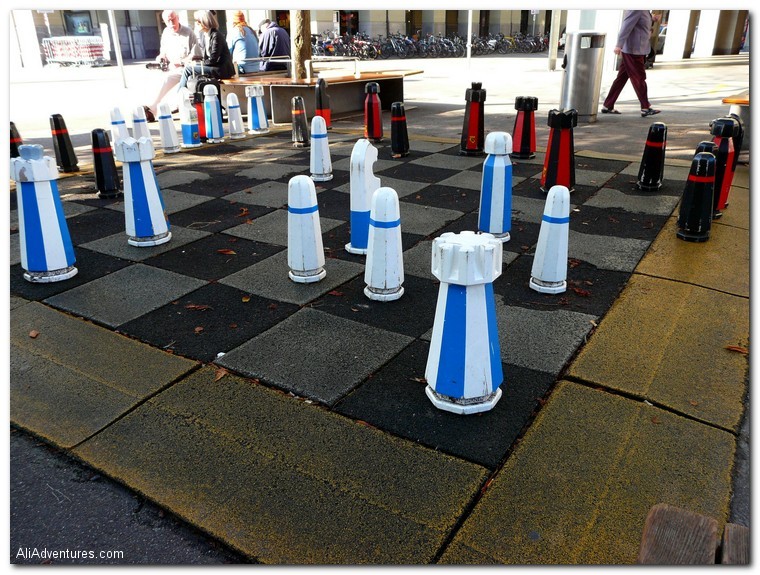 Continuing on, I saw the Zytglogge (clock tower) which was neat to look at but not very exciting when it chimed on the hour. I also walked across the river on the Kirchenfeldebrucke (that’s the name of the bridge) for some really pretty views of the river and Bern’s outskirts. This was also right near a casino if you want to do some gambling in Bern.

The last sight I went looking for before lunch was the Kinlifresserbrunnen. That’s a giant snacking on children. It was a funny statue to see, and even more entertaining to see a group of real children gathered around it when I was there taking pictures. Luckily for them, they got away before he got hungry again.

After grabbing a quick slice of pizza for lunch, I hopped back on the train to Freiburg. If I ever need anything at the US Embassy again, I’m definitely going there as opposed to Frankfurt simply because it would take so much longer to get around in Frankfurt. I was only in Bern for about 4 hours but I enjoyed the scenery, there were lots of tasty-looking restaurants, and I think it would be a great place to stop for a night. Besides, they have a statue of a giant eating children, how funny is that?