How Much We Spent Traveling in Spain for One Week: Toledo & Salamanca

After spending a week in small towns in Andalucia doing a Spanish immersion program, Andy met me in Madrid, and we spent a week in Toledo and Salamanca. Many people visit Toledo as a day trip from Madrid, and Salamanca is a popular university town but not often visited by tourists. But we wanted to travel a little slower and relax while seeing more of Spain. Here’s how much a one week trip to Spain cost.

Amounts are listed in euros and US dollars. The expenses listed are for two people for 7 nights in Spain. I’m not including my flight to Spain or the 2 days I spent in Madrid by myself.

Lodging was the biggest part of our cost to travel to Spain, but it still wasn’t so expensive. This is for 3 nights in Toledo and 4 nights in Salamanca.

In Toledo, we found a cute hotel on the edge of the old city walls with easy access to everywhere we wanted to go. The beds were comfortable enough, the staff were helpful, and the bar area was cozy.

In Salamanca, we found a great deal on a hotel right on the Plaza Mayor with gorgeous views. Salamanca is more popular on the weekends, so since our stay started on a Monday, the prices were a little cheaper.

However, the bed was incredibly hard. One of the hardest beds we’ve ever had. We loved the view and the room was actually really pretty, but we spent 4 nights barely sleeping.

I wouldn’t stay there again, but if you like hard beds or you’re not as sensitive to it as we are, check out Sercotel Las Torres. We spent $266.46 for 4 nights in Salamanca, or about $66.62 per night.

Most of our transportation costs were for trains. We took the train from Madrid to Toledo once Andy met me after my Spanish program. Then we had to take the train from Toledo to Madrid and Madrid to Salamanca.

And when we were done there, we took the train back from Salamanca to Madrid to start our journey home. (This does not include all the trains from Madrid to Berlin.) We also took a couple of taxis and rides on the metro in Madrid.

Here’s what our train tickets in Spain cost:

Since we were staying in hotels, we ate out for every meal. Sometimes we just had granola bars and fruit in our hotel room as breakfast, so that saved a couple bucks.

We also drank a decent amount that week and indulged in some desserts and snacks. But overall I’d say food in Toledo and Salamanca isn’t expensive.

Our activities costs were pretty low for our week in Spain. We climbed 2 church towers, one in Toledo, one in Salamanca. We also did one of those cheesy tourist trains in Toledo.

The thing we spent the most money on was tipping our tour guide for the free walking tour we did in Toledo. There are several other things you can do in these cities, like museums and paid tours, that can start to add up if you want to pack your time full of activities.

Going to Madrid? I loved the food tour I took there before Andy and I went to Toledo and Salamanca. Check it out and book the Madrid Tapas, Taverns, and History tour here!

This category doesn’t include much this time. I was supposed to do laundry at some point, but the one place we found was closed, so I ended up washing a few things in the sink.

We bought a few decorative hooks as souvenirs to hang up at home and some cough drops for Andy, but if you usually buy lots of souvenirs, adjust this category as necessary.

So how much does it cost to travel to Toledo and Salamanca Spain? We averaged $180.26 per day, or $90.13 per person per day, for one week in Spain. If you plan on spending less time in each city and moving around more to other cities, add in a little extra for more train tickets.

Eating out doesn’t have to be expensive. We ate reasonably priced meals, but certainly you could go cheaper or more expensive if you like fancier restaurants. Staying at an apartment rental and cooking a few meals will also save you money. Overall, I don’t consider Spain to be a particularly expensive country. 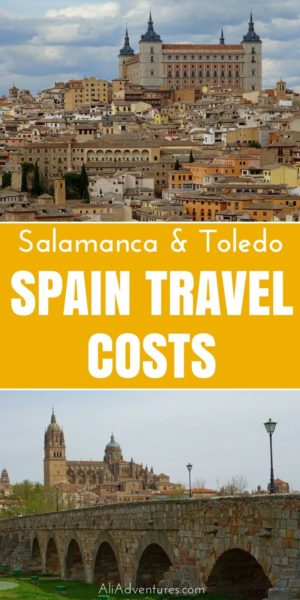 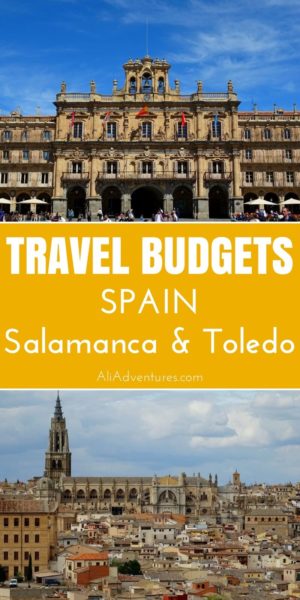 Sign Up
Berlin International Restaurant Project: Poland and Peru Best Things to do in Krakow, Poland