My Experience with a Spanish Immersion Program in Spain

The native Spanish speakers at my dinner table broke out into hysterical laughter. While gesturing to demonstrate short sleeves, I said “cortas armas” during a conversation at dinner one night. I didn’t know the word for “sleeves” in Spanish, so I guessed. I’m not sure if, in the moment, I thought “armas” was the word for arms, or if I was just making something up, but I certainly wasn’t expecting the reaction I got.

Once one of them calmed down enough to speak, they explained what I had actually said. The word “armas” in Spanish means weapons. I basically said that some shirt had short weapons. There was nothing I could do but join them in their laughter.

Why I signed up for a Spanish immersion program in Spain

I live in Berlin. I should be working on improving my German. But when a friend introduced me to Pueblo Español, I was intrigued. I studied Spanish all throughout high school and college, and I have a Spanish minor. I did a summer study abroad program in Salamanca, Spain. One year I even used vacation time to do a family stay and Spanish classes in Quito, Ecuador.

I simply love the language. I love being able to talk to people when we travel to Central America and Spain. It’s pretty, and speaking it is fun for me.

So no, I don’t need Spanish, but I love to keep improving those skills. And spending 8 days in an immersion program sounded like a fun challenge.

My experience with the Pueblo Español immersion program

The first couple of days were rough. My brain wasn’t used to dealing in Spanish all day long, and it was exhausting. Plus I’m an introvert, so constantly being around people was wearing on me, too.

But once I got used to the people and my brain started adjusting to the non-stop Spanish, things were great. The people were so interesting. Ages ranged from mid 20s to mid 80s, and there was never a lack of things to talk about.

I laughed every single day. It was a fun experience with friendly people who made the non-native speakers feel comfortable making mistakes – like my short weapons blunder. And once I felt more comfortable speaking and listening to so much Spanish, my confidence with the language grew.

Several of the volunteers and the director told me towards the end of the program that my Spanish had improved a lot over the week. One volunteer even told me he was really worried about me at the beginning, but I made big improvements within a few days.

On the last night of the week, after a festive dinner of tapas in the hotel, the group decided to go out to a bar for another drink or two. I was exhausted and not really up for it, so I stayed behind with two others – one student and one volunteer – who also chose not to go out. The three of us hung out talking for about two hours, all in Spanish. I would not have been able to do that at the beginning of the week.

There was one activity where we were pretending to be on a conference call, and two of us were interviewing for a job. The position was a host of a TV program about cooking. I’m not great at improvising on topics I know nothing about, even in English, so this was tough for me. It would’ve been better to have time to prepare ahead of time, like you would in a real interview.

The hotel’s wifi was a little slow. I set things up so I wouldn’t have to work that week, but a few people there did have to work at least a little. Plus it made Skyping with Andy difficult.

I’m so glad there were a few activities outside the hotel and that we got to see the town and some other parts of the region. However, one of the excursions lasted all day, and I thought that was too long. It meant most of the day was spent listening to Spanish, but not interacting as much as we did on other days.

I was a little concerned about the food situation since I have so many things I can’t eat (gluten, dairy, eggs, beans). Each day the hotel provided a menu of our options for the next day with two choices each for lunch and dinner. They even translated into English, although this wasn’t always so helpful.

The first couple of days were stressful for me with the food because I couldn’t understand enough of the Spanish. My brain was still adjusting and I felt overloaded. It felt rather difficult to say “I want this but without X, Y, and Z.”

But once I realized I wasn’t really limited to the menu options, everything ran smoothly. I could decide neither option worked for me, and instead I wrote in “baked chicken with potatoes” or “salad with tuna, tomatoes, and avocado” and it all worked.

There were a few other people in our group who had dietary problems, some more restrictive than mine, and no one went hungry.

The Pueblo Español program is designed for anyone who wants to improve their Spanish. It’s not for beginners – you must have a decent level of conversational skills and language knowledge to sign up – and it’s not a grammar class or school setting. I’m not fluent, but I can get by and have somewhat simple conversations in Spanish.

Not sure what your level of Spanish is? Don’t worry, Pueblo Español requires a short, simple language assessment before you can sign up.

The Spanish immersion program has no teachers. Instead, there is a 1:1 ratio of non-native speakers to native Spanish speakers from around Spain who volunteer for the program. They are from all ages and walks of life, making the conversations and experiences really interesting.

The program I took was in a town called Úbeda, which is a UNESCO World Heritage designated town in Andalucia. It’s small but pretty and still has some of its old city walls. And since this was not a school setting, we spent most of our time when we weren’t in the hotel outside enjoying the town.

About half of the program involved one-on-one conversations. For about an hour, we would be paired up with native speakers and talk. Sometimes there was a suggested topic or Spanish idioms to learn, but for the most part, we just talked about whatever we wanted. We wandered around town or got a coffee at a cafe or sat on the hotel’s terrace while practicing our Spanish and getting used to hearing different accents.

Other times, there were group activities. Some were silly theater performances, while others involved discussing a topic and talking about our ideas to the rest of the group. Usually these all turned out to be a fun way to practice speaking.

The variety helped. It meant we got to hear different accents, and there was never a dull moment. Talking about different topics and doing different types of activities improved my vocabulary and my issues with verb tenses.

And because it’s Spain, there was an hour and a half break in the afternoon for siesta. Definitely needed to rest my brain!

The Spanish immersion program runs once a month from March to November. And if you want to brush up a little before jumping into the program, they offer 4 days of intensive Spanish classes before the main program starts.

What’s included?
The 8 day program costs 1950€, but they usually offer discounts for early booking if you contact them about it. The fee includes:

The excursions and activities included a walking tour of the town, visiting a centuries-old underground synagogue, seeing local pottery being made, an olive oil tasting, hiking in Sierra de Grazalema Natural Park, and visits to the nearby towns of Cazorla and Baeza.

Aside from my hotel in Madrid and my flight from Berlin to Madrid, the only other things I paid for that week that weren’t included in the program were a couple of Cokes and a hot chocolate.

Who should take this program

The Pueblo Español immersion program is great for non-native speakers who have decided to live in Spain or those who need to improve their Spanish for work. I think it’s also great for people who love the language and spend a lot of time traveling in Spanish-speaking countries.

I didn’t do the 4 day intensive Spanish class before the program, but another student did, and she said it was really helpful for her.

The immersion program is designed to improve your Spanish – both your fluency and your confidence with the language – in a short amount of time. It definitely did that! I spent another week traveling in Spain with Andy after the program, and I could tell I had made big improvements. I was also a lot less nervous about speaking in Spanish, and I didn’t worry about making mistakes.

I loved this group and the experience so much, I cried during the closing ceremony. I cried saying good-bye to the people I had so much fun with that week. I cried happy tears for myself for how much this program did for me. Even though it was challenging, I’m so happy I did this.

Pueblo Español provided me with a complimentary immersion program, but my opinions are just as real as those tears. 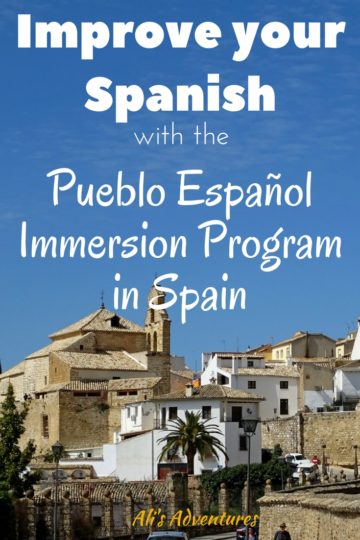 Sign Up
5 Reasons I Love Making Money From Affiliate Marketing (and 2 Reasons I Don’t) Non-Traditional Interviews: Round the World Travel and Living in Cairo