If there’s a chance to go up in a high building and get a view from above a city, Andy and I will usually take it. Berlin’s Fernsehturm (TV Tower) can be seen from almost anywhere in the center of the city, and due to its great height, offers wonderful views of Berlin. We kept waiting to go until the weather was good, but this time of year the weather is steadily getting worse. Finally a few weeks ago the weather was in our favor on a day when Andy wasn’t at work, so we went for it. See why this is such a fun thing to do in Berlin. 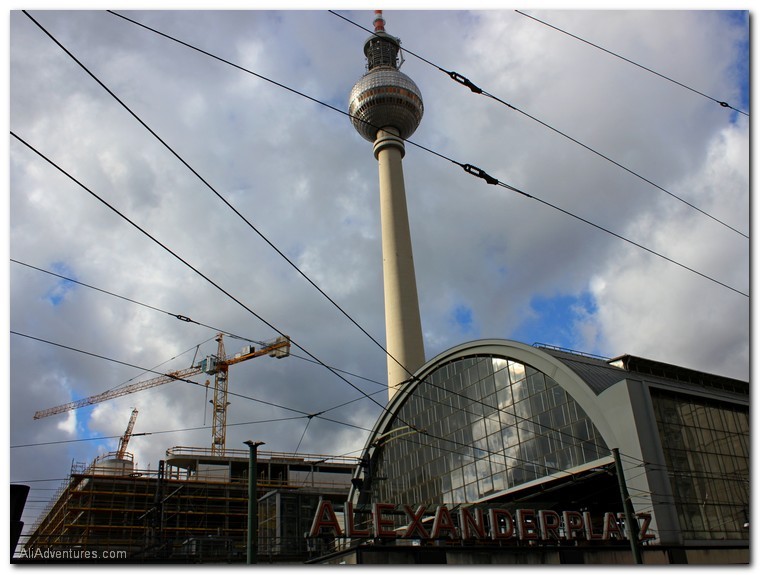 The tower is located at Alexanderplatz, which is the center of Berlin and a good place to start if you’re touring the city. It also means the tower has a views of different parts of the city no matter where you’re looking. From many sides, you can see the Spree River that runs through Berlin. In some parts of the city, the river was the border between West and East Berlin. 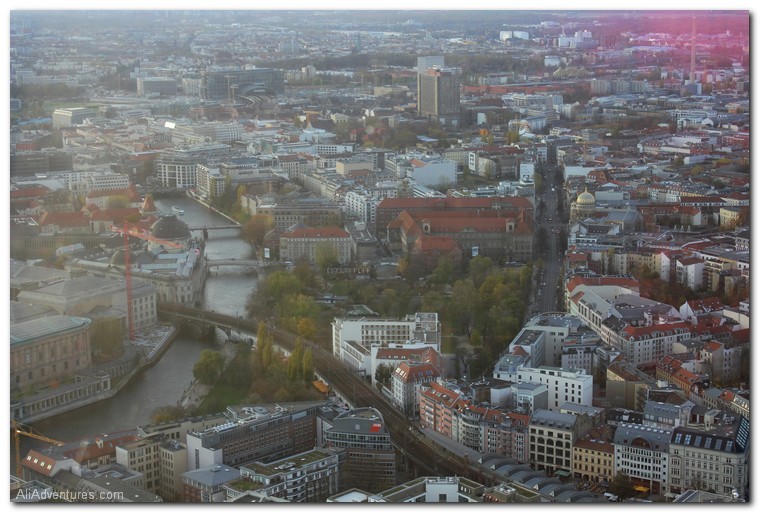 In the picture below, you can see the Berliner Dom, which is the big church in the foreground, and the Reichtstag building which today houses the Bundestag (federal government) which is the glass domed building in the upper right corner of the picture. The big green area is a park called Tiergarten. Right at the edge of the park where you can see a wide road going through you can just barely make out Brandenburg Gate. The park was in West Berlin, and the buildings in front of Brandenburg Gate were in East Berlin. But while the Berlin Wall was up, the gate was isolated. 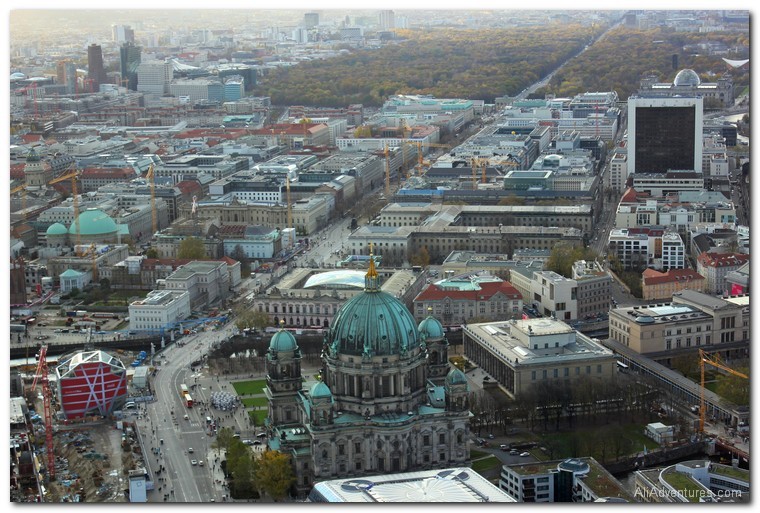 The right side of this next picture is West Berlin, and the left side of the picture is East Berlin. If you look closely, you can barely see parts of the East Side Gallery. Find the boat in the river at roughly the mid point of the picture and look a little to the left, and you should see it. 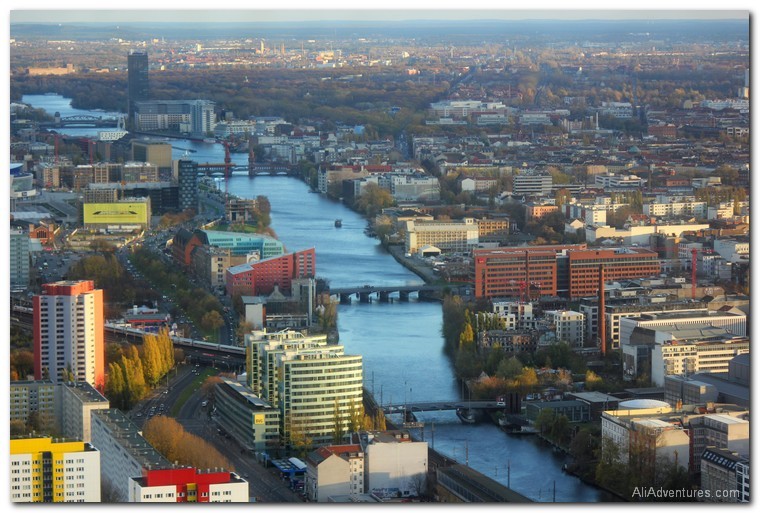 A closer look at the Berliner Dom… 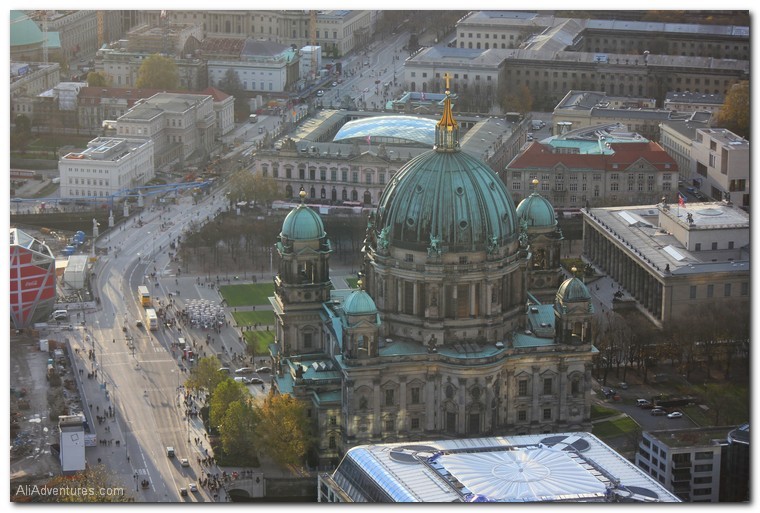 and the Berlin train station… 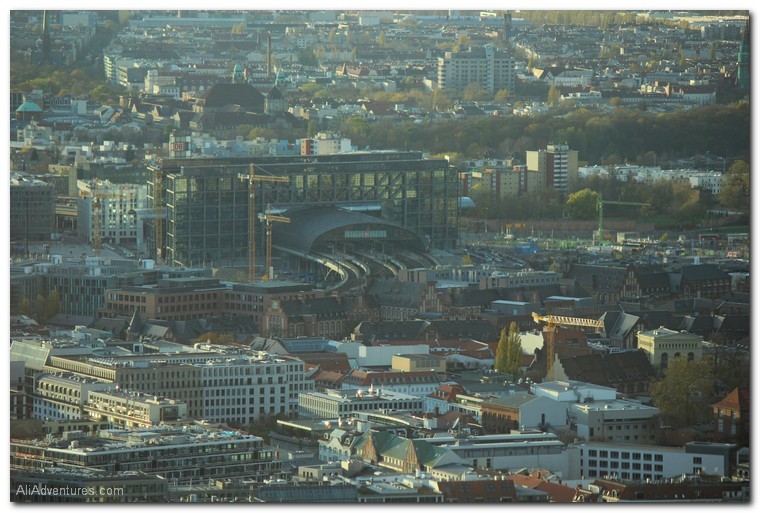 The big green field in the next picture is Templehof. It used to be an airport used for transporting goods to West Berlin since the wall isolated it within East Germany. The airport was still in use for about a decade after the wall came down, but it finally shut down in 2008. Instead of bulldozing the whole thing and building on top of it, the airport was turned into a huge park. The apartment Andy and I are renting is just a few blocks away from the eastern side of it, and we’d probably go hang out there if we were here in the summer. 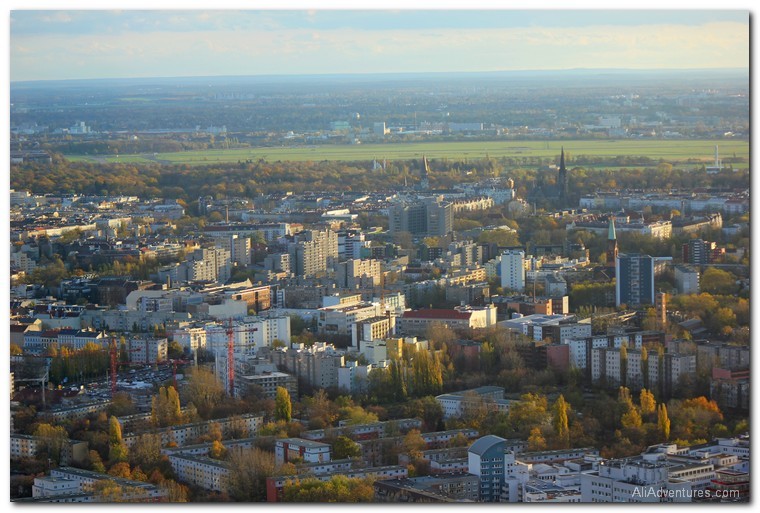 While we were up in the tower, I saw a set of ruins. I didn’t even know there were medieval ruins in Berlin. It turns out this was the Franziskaner Klosterkirche, a Franciscan monastery, and it’s just a few blocks away from Alexanderplatz. 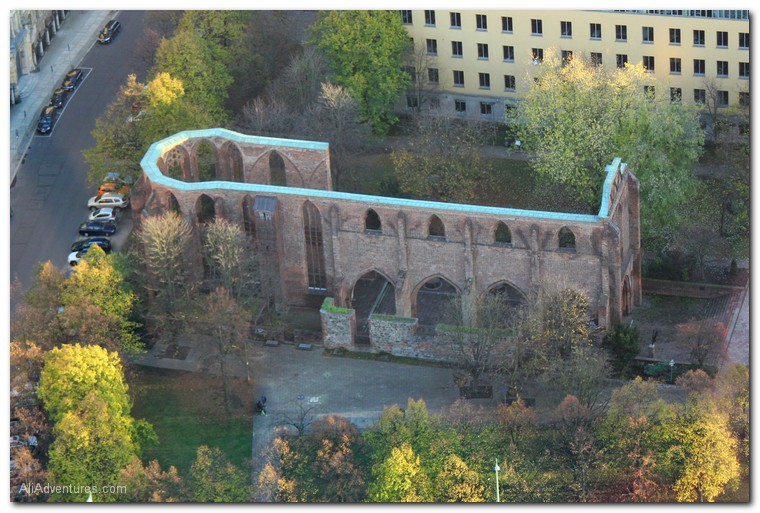 Andy and I stopped in Alexanderplatz a few times to try to get a good picture of the Fernsehturm along with the Alexanderplatz sign on the train station, like the first picture in this post. So I was glad to be able to get a picture from the TV Tower of the square itself. Here you can see a tram going through the square and the Weltzeituhr, the world time clock that shows the time in major cities around the world split into their time zones. It even shows the cities in either the northern or southern hemisphere. 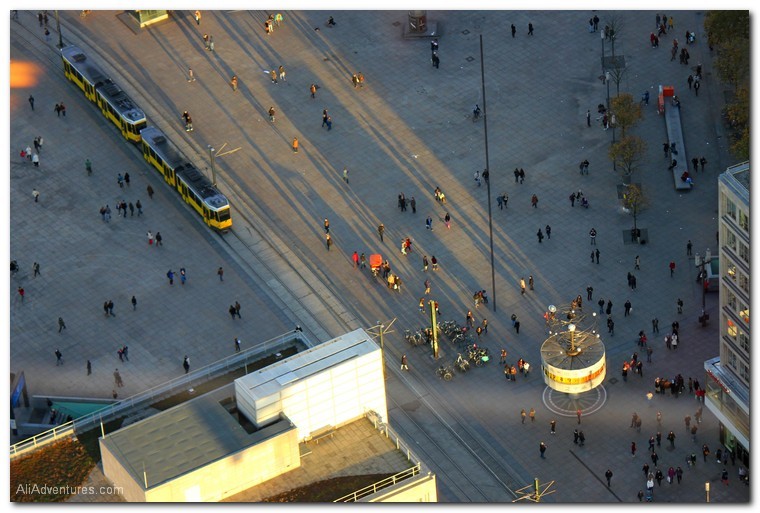 I wasn’t always sure what I was looking at, but I did enjoy the views. Plus there were signs all around the viewing area describing the part of town you were facing. 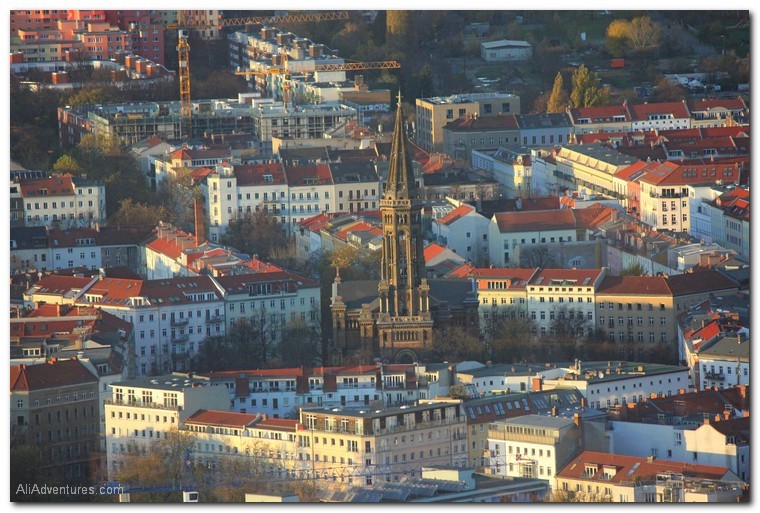 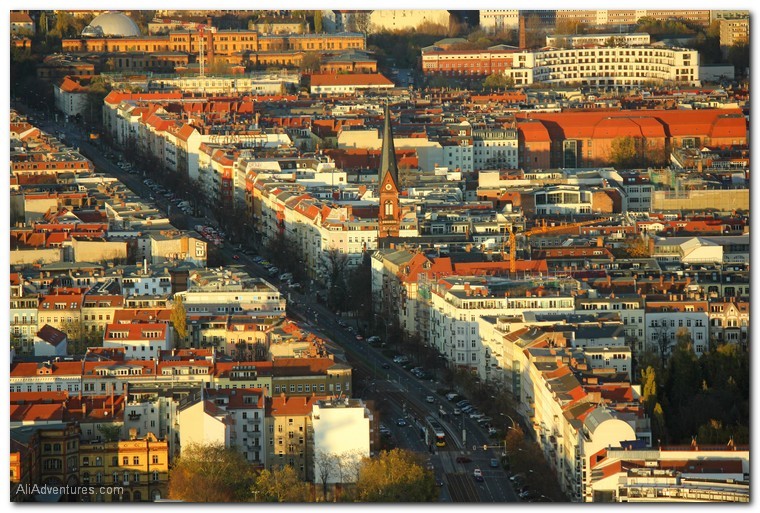 We went to the Fernsehturm late in the afternoon, about an hour or so before sunset. I highly recommend this time of day because the light is good, you get plenty of time to be up there during daylight, and you don’t have to wait too long to see the sunset and get some early evening pictures. 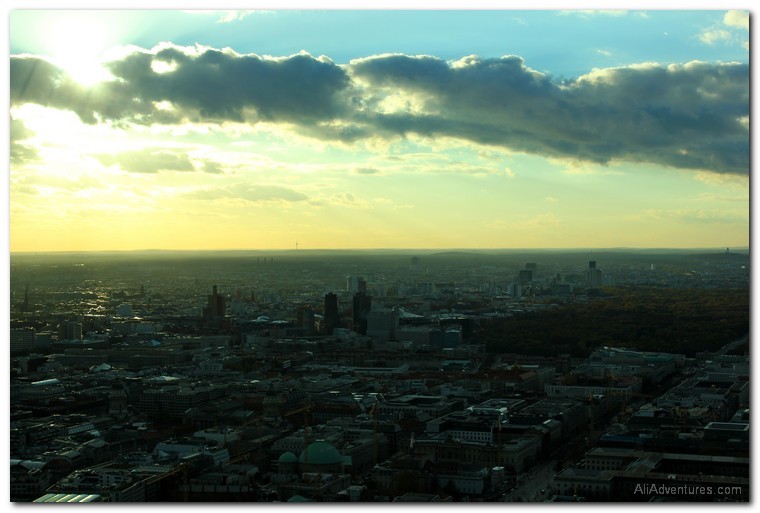 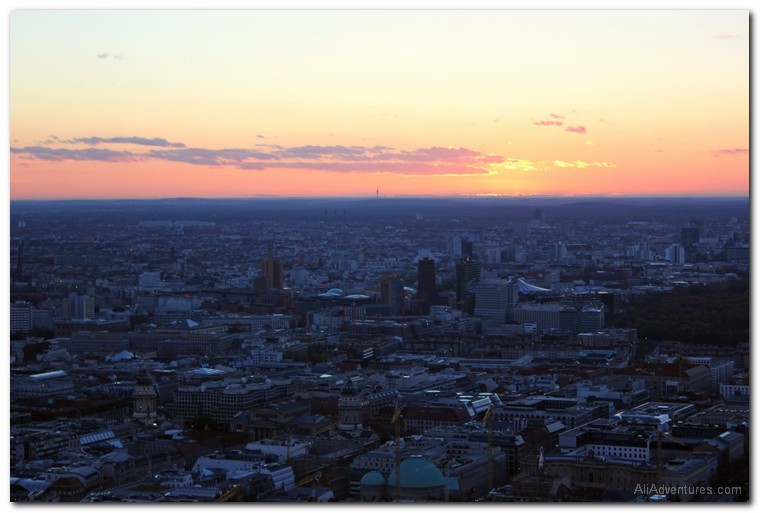 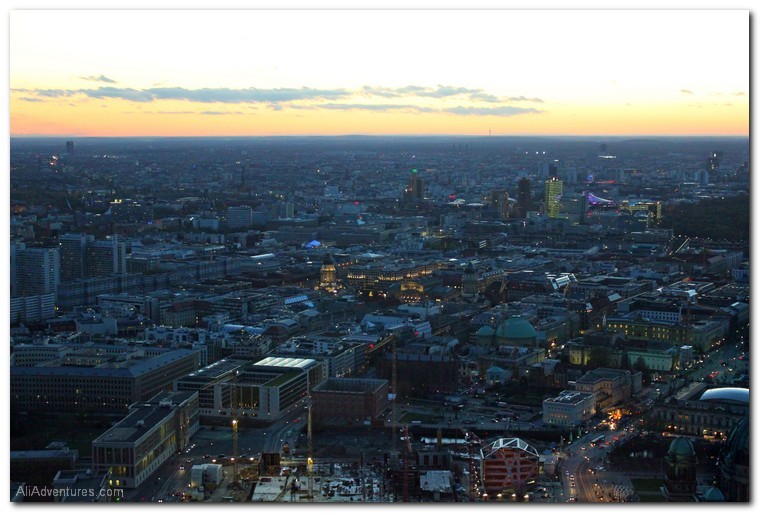 At the time of writing, tickets cost 12.50€ (about US$17) per adult. However, if you want to pick a specific time and date, and avoid the long wait, you can buy tickets for 19.50€ (about US$27) per adult online. Despite the extra cost, I’m glad that’s what Andy and I did because the wait time when we showed up was an hour and a half. Buy a skip-the-line ticket here.