Bernauerstrasse – Memories of the Berlin Wall

Imagine a life where your freedoms were being taken away, slowly, one at a time. Imagine a life where your movements were restricted, where you needed special permission and documentation to go somewhere you once could go freely. Imagine the government telling you this was all for your own good, that they were protecting you and the real enemy was beyond the borders. What might seem like a small change, a small sacrifice, in the beginning eventually becomes a huge burden, a giant presence controlling and dictating your every move.

That was life in East Berlin, and all of East Germany, during the time after World War II up until the wall came down.

When Andy’s parents came to Berlin to visit us for Christmas, Andy’s dad mentioned wanting to see Bernauerstrasse because he’s really interested in World War II history. We had sent them off to see the East Side Gallery on their own since we had already been there, but we didn’t really know anything about Bernauerstrasse. I’ve been fascinated to learn more about the Berlin Wall era for quite some time, so one day after lunch the four of us hopped on the U-bahn and got off at Bernauerstrasse, a station that was boarded up when the wall divided the city.

Effects on the residents of Bernauerstrasse

The first thing I saw was a line of metal posts a little ways back from the street. This was where the wall used to be, where east was separated from west. After August 13, 1961 when the first stages of building the wall began, many people who lived along this section panicked and decided they needed to escape. Inhabitants jumped out of their buildings to get to the other side of the border, some paying with their lives. 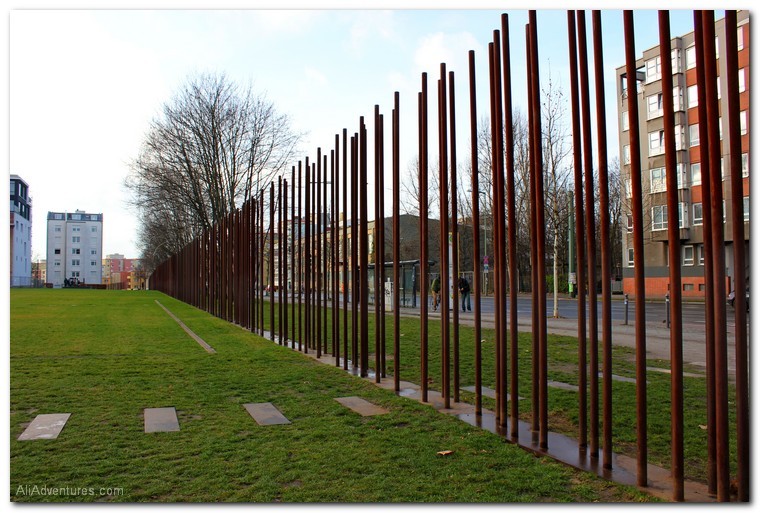 Escape attempts continued throughout the nearly 30 years of the wall’s existence, and much of it was at Bernauerstrasse. The memorial shows not only where apartment buildings used to be, but also where tunnels were built as escape paths. Most, but not all, were built from the west over to the east. About a dozen tunnels were started, but only three were completed and used to rescue fugitives. The rest had to be abandoned or were betrayed to the secret police. About 90 people were able to escape through the tunnels that ran underneath Bernauerstrasse.

Not long after the wall construction started, the authorities began to nail doors shut and brick up the windows of the buildings on Bernauerstrasse to prevent people from escaping into the west.  At first it was just the ground level, but eventually upper levels were boarded up as well. After a few weeks residents were evicted, and soon the buildings on the border were left vacant. After a few years, all the buildings along this stretch of road were torn down to make room for bigger and better border protection. Even a cemetery was uprooted and moved.

Don’t you want to spy on your friends too?

East German authorities were constantly issuing statements of propaganda to show themselves as the good guys and West Germany as the bad guys. They claimed that the wall was built simply to protect in the same way someone might put up a fence around their yard. They claimed that if it were up to them, East Berlin and West Berlin residents would be able to visit each other freely, that it was actually the west that was preventing friends and family to see each other.

At a more local level, East German authorities tried to convince East Berlin residents to join the civilian administration to help out. They wanted the citizens to report suspicious activity, such as their neighbors planning an escape to the west. This was a way for the authorities to have more eyes and ears keeping track of everyone’s movements. In some cases, civilians even helped build border fortifications. However, the authorities didn’t manage to recruit as much help as they led everyone to believe. It was the “everyone’s doing it and so should you” trick in an attempt to convince people to spy on their own friends.

The city of Berlin probably could have wiped clean every shred of evidence that the wall had ever existed. But some pieces were saved as a reminder of what happened, in the hope that the reminders are big enough to prevent something like this from ever happening again.

A stretch of wall still stands along Bernauerstrasse. You can climb the stairs of a tower across the street and look down into the border area, the no man’s land between east and west. In this area there is another street that used to cross Bernauerstrasse called Bergstrasse which has been in existence since 1752. When barbed wire, and later the wall itself, divided Berlin at Bernauerstrasse, Bergstrasse was blocked. Around 300 streets in Berlin were blocked by the wall in similar fashion, but Bergstrasse is the only one that remains blocked today.

Towards the end of the outdoor museum is a small building with the requisite gift shop. But upstairs they play two different videos that describe Berlin and Germany during the time the wall stood. It wasn’t just Berlin that was divided by a wall. Border fortifications were built all along the line that split Germany into east and west, and it was just as dangerous to try to cross there as it was inside of Berlin. Both videos are very interesting, free, and well worth the 30 minutes to watch.

Again, imagine what life was like back then in the not so distant past. Propaganda being spread to convince citizens that restrictions were for their own safety, that the authorities were only trying to protect them and everyone on the outside was evil. Imagine your movements and choices being controlled. Imagine the government and your neighbors spying on you. Imagine how you might not realize how wrong these things are, that it’s not for your own good, until it’s too late and suddenly you’re forced to jump out a window to escape.

Although today maybe it’s not so hard to imagine that after all.