Scenes From Siena, Italy and a Steam Train Through Tuscany

Siena is one of the most popular cities in Tuscany, so it was an obvious choice for a visit while we were staying in Pisa. We could’ve gone as a day trip, but by that point we were really getting sick of our uncomfortable bed and we needed a break. So we decided to splurge a little and stay overnight, and it was totally worth it.

Siena is well known for a horse race called the Palio that is held in the Piazza del Campo every on July 2nd and August 16th. It’s a very short race (just three laps around the Piazza) but the whole event is about traditions that have been around for centuries. Andy and I were not there in the summer for the race, but it was interesting to try to imagine what the Piazza would look like for the event. 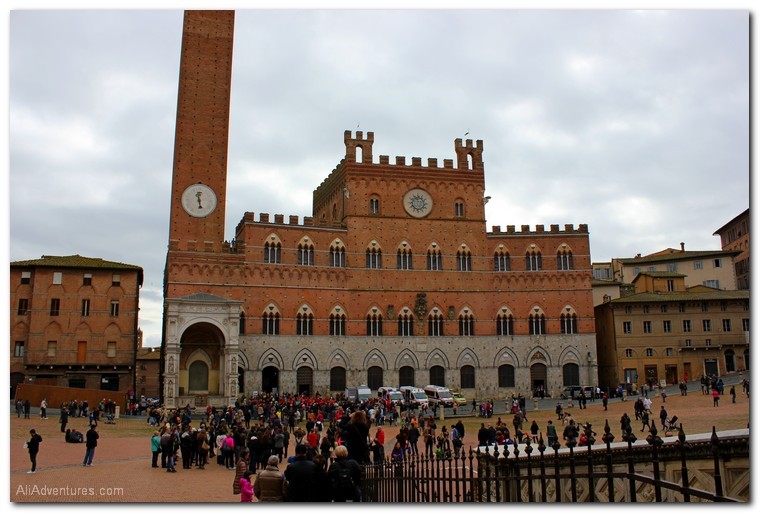 It’s possible to climb the tower pictured above, which is part of the Town Hall building, but it’s roughly 400 stairs, which is a bit more than I think I can handle. On top of that, it was really overcast and we didn’t think the views would be that good, so we skipped it.

We spent a good part of the day just wandering around. Siena is a really pretty city with lots of pedestrian areas, so we just let the streets take us where they wanted.

As with any Italian city, there were churches everywhere in Siena. But the biggest and most famous is the Siena Cathedral, or Duomo di Siena. We didn’t go inside because there was a fee and we generally like the outsides better anyway. But while we were there, we noticed a side piece, partially in ruins, partially unfinished, that you could climb. The weather had cleared a bit, and this seemed more interesting than yet another tower anyway, so we got our views of Siena from above after all. Tickets cost 7€ per person.

View from our hotel room

One of the main reasons we decided to stay overnight in Siena was to get a break from the uncomfortable bed in our Pisa apartment. Luckily the hotel bed was more comfortable, and the shower was sooo nice! But even better was the fantastic view from our room. I’m sure it would’ve been even better during the summer, but I kind of liked the ominous clouds.

We stayed at this hotel, and I’d definitely recommend it if you’re traveling to Siena.

While searching for hotels, Andy found out there was a historical steam train, which only runs a few times a year in spring and fall, doing a scenic journey out of Siena that weekend. Since Andy loves trains and I love taking pictures of landscapes, we booked tickets to join the fun. It was truffle season and the train was going to a tiny town in Tuscany called San Giovanni d’Asso which is well known for truffles. The town had some gorgeous views since it was up on a hill, but it was tiny and a bit boring if you don’t care about truffles. Overall though, it was a fun day and I’m glad we went. Tickets cost 32€ per person. For more information, check out their website here.

After our weekend in Siena, I’m convinced that THIS is the Tuscany people talk about. I really enjoyed Lucca, and Florence should not be missed. But Siena was absolutely gorgeous, and the surrounding areas took my breath away.