Kizhi Island is set up as a big open air museum and shows what life was like for the community that lived there 100 or so years ago. It seemed like this was how people lived well over 100 years in the past, but this area of Russia was very isolated.

The village included wooden buildings, a big church that was being restored, homes we were able to go into to see what the living conditions were like, plus there were employees who sang songs, chopped wood, and weaved cloth to give life to the village. Kizhi ended up being one of my favorite stops on the cruise. 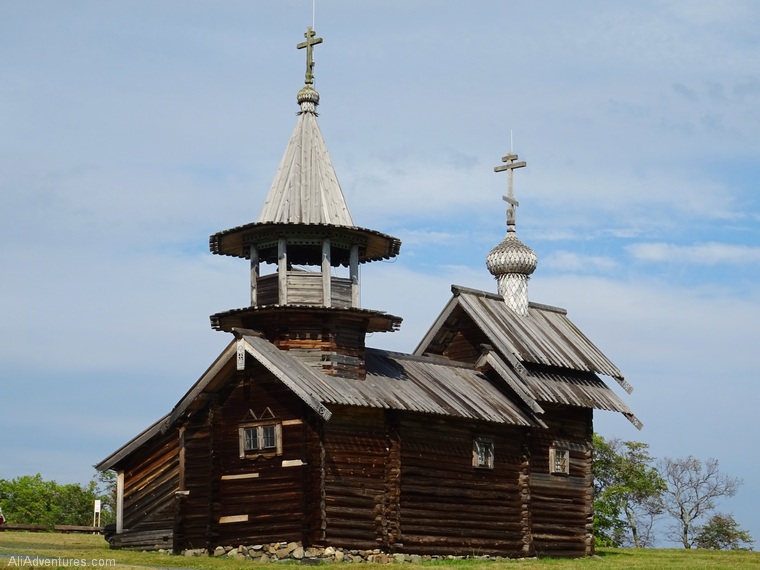 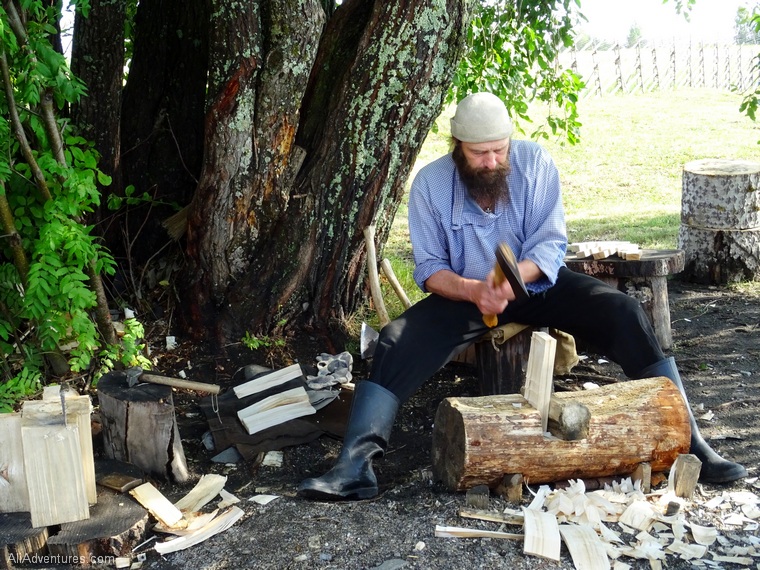 Our last cruise stop before St Petersburg was Mandrogy, another open air museum village. It was one of these places where you could see blacksmiths and candle makers at work. The activities on offer from Viking were a traditional spa where they basically whack you (supposedly not too hard) with birch branches, or painting a metrishka doll. Andy and I chose to wander around on our own. Once we got away from the main village part, we were able to enjoying the quiet nature of the place. 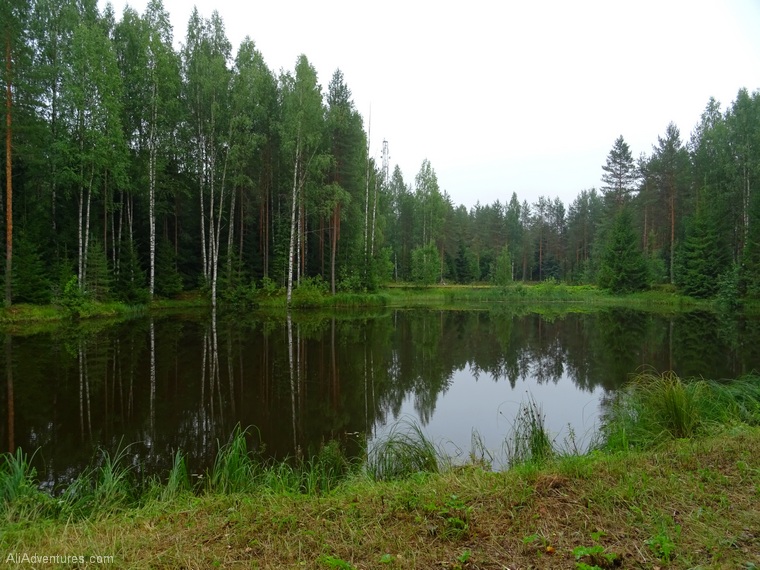 Visiting the famous Hermitage Museum was the excursion on the itinerary for the first day in St Petersburg. Once again, we skipped this. I know, it’s one of the most famous museums in the world, but I’m not a fan of art museums, and the art inside isn’t even Russian art. So Andy and I explored the city ourselves. The outside of the Hermitage building had an insane line of people waiting to get inside, so we felt we made the right choice by skipping the hoards inside. 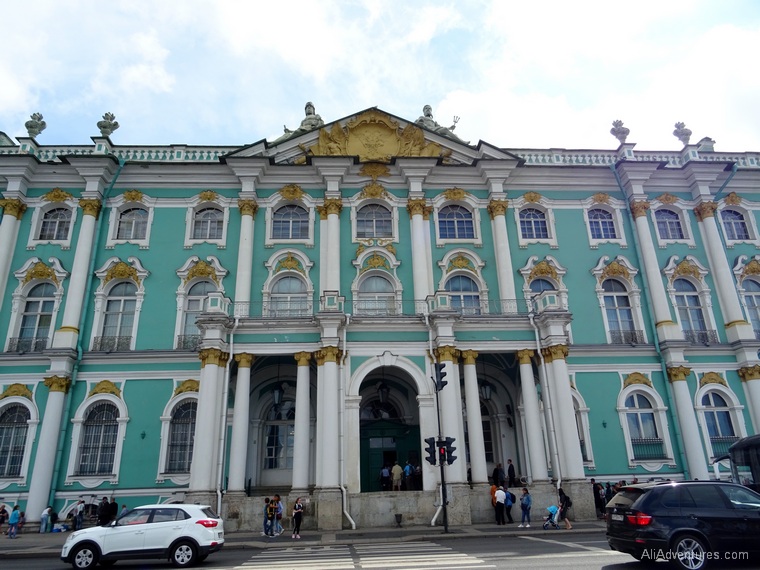 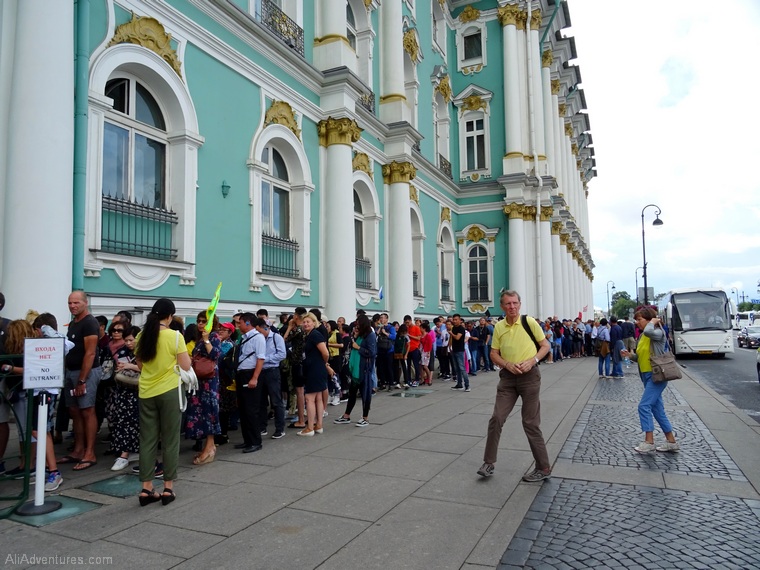 Later that night was an excursion to see a ballet. St Petersburg is well known for ballets, so I had high hopes for this, and while it wasn’t awful, it wasn’t great either. I felt like the story was too tricky to follow without dialogue, and ballets I’ve seen in the past seemed easier to enjoy without knowing exactly what each piece of the story was. Beyond that, the theater seemed to be catering exclusively to big tour groups like ours, which felt a little less authentic. I would’ve preferred a theater where locals might also go.

However, if you’re interested in seeing a ballet and you’re less cynical than we are, you might really enjoy this. 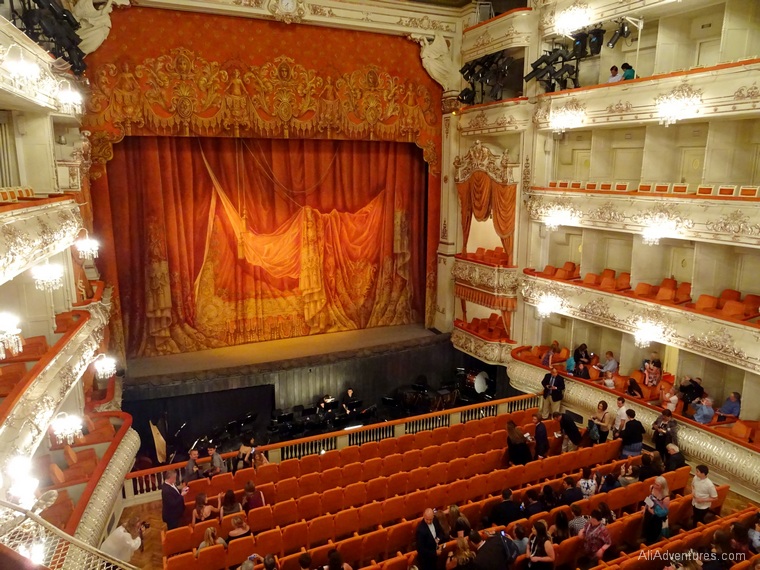 The next day, we took a city tour of St Petersburg. We saw the famous Church of the Savior on Spilled Blood (one of many “spilled blood” churches we visited while in Russia) but we only had time to see the outside. (Another tour the next day included going inside, but I wasn’t feeling well that day.) We also visited the church within the Peter and Paul Fortress where we heard interesting stories about the many Romanovs who are buried there. 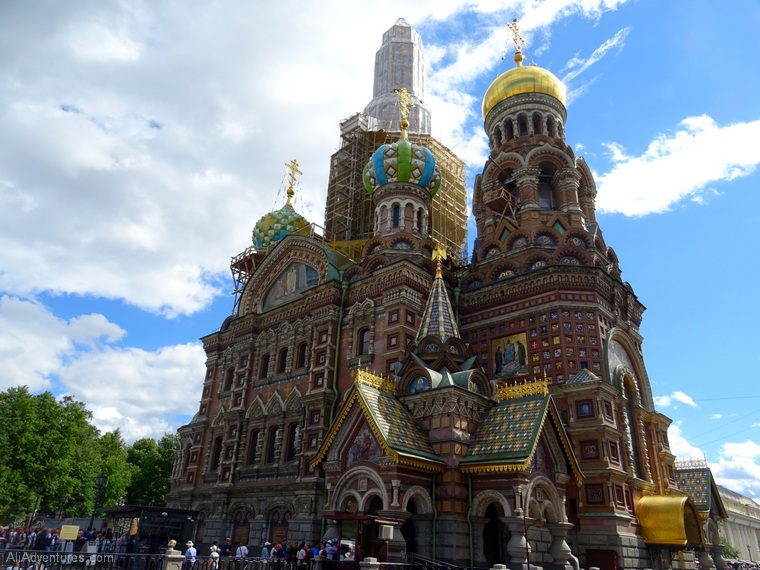 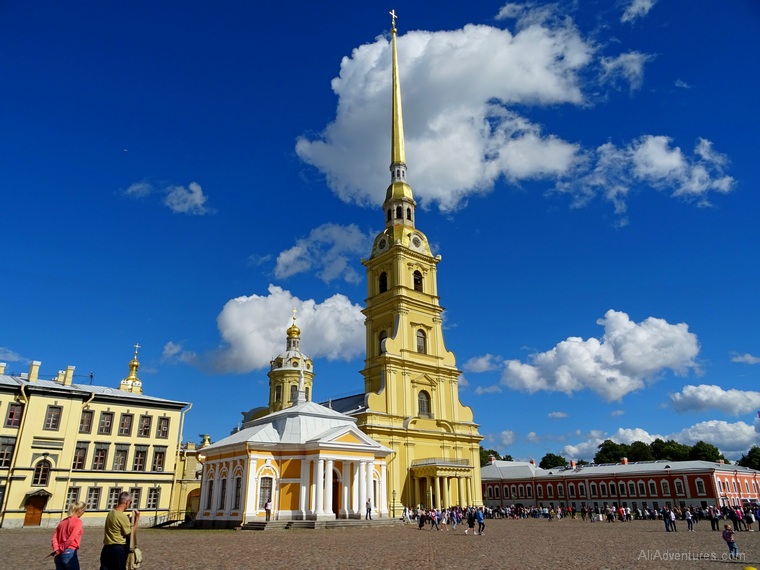 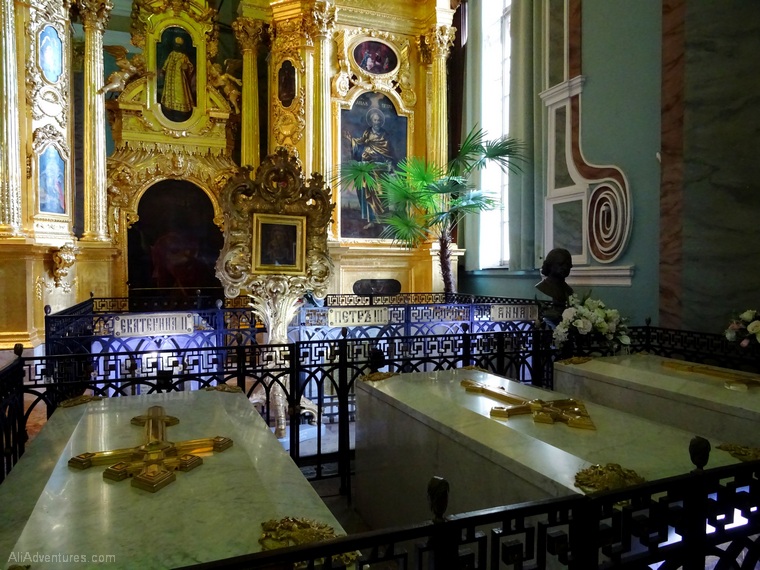 Towards the end of the tour, we had free time near St Isaac’s Cathedral. Since Andy and I love views of cities from above, the two of us, plus Andy’s dad, climbed church tower for some great views of St Petersburg. Unfortunately we had to fight our way through the crowded viewing platform, including people who thought it was reasonable to spend 10 minutes taking selfies in one spot and preventing others from seeing the view. 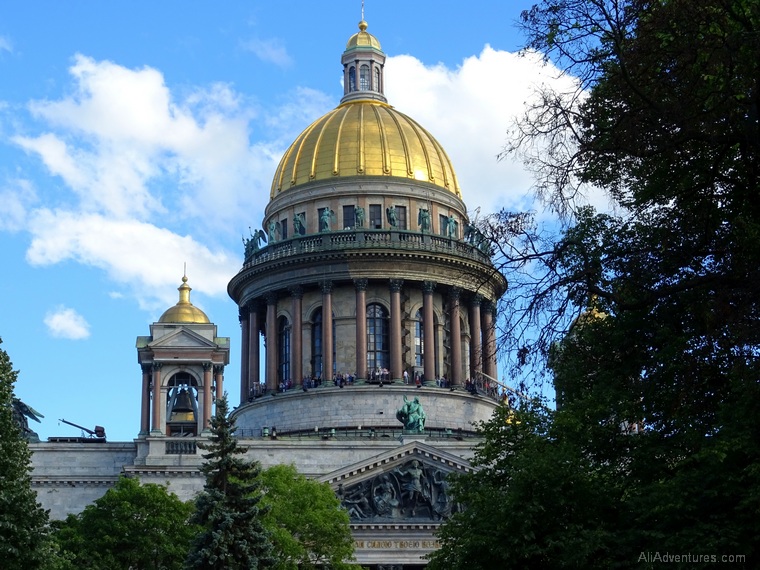 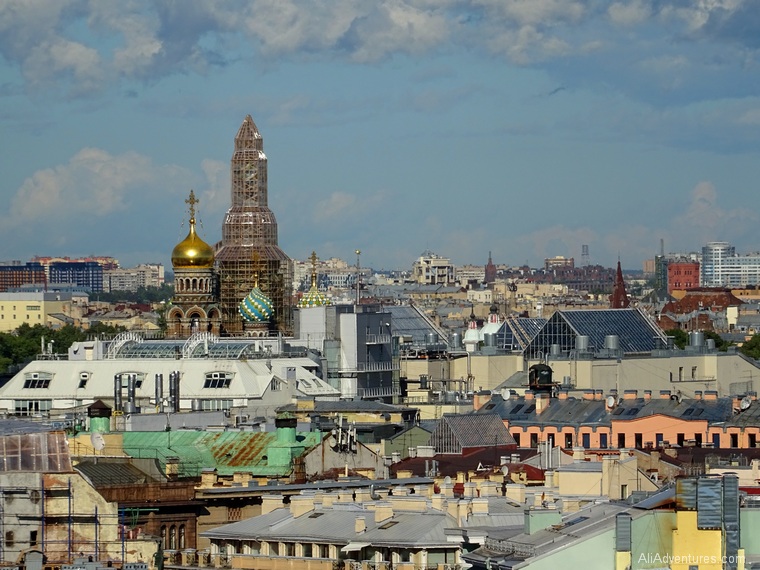 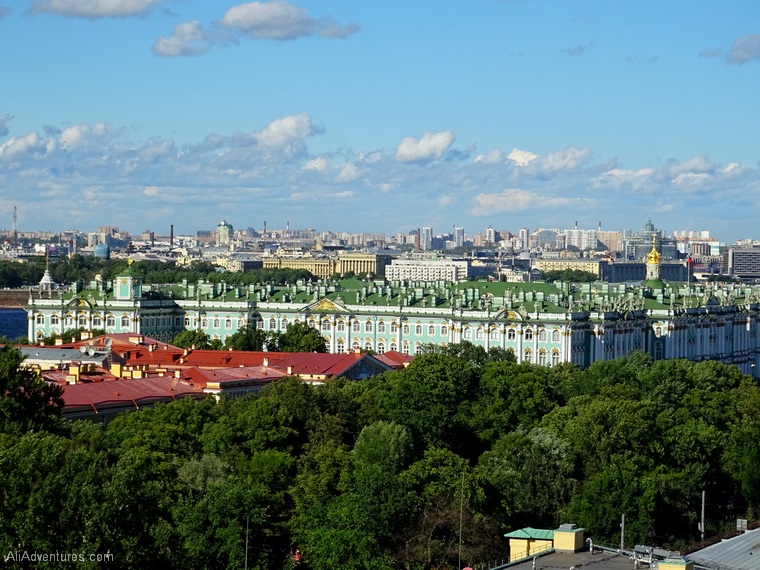 After 12 nights on the ship, we began our two day St Petersburg extension. We skipped the city tour that was included with the extension because it sounded almost exactly the same as the city tour we had already taken.

You might remember me singing the praises of Miniatur Wunderland in Hamburg. It’s fantastic. Well, Andy found a place in St Petersburg called Grand Maket that is very similar, except it was Russia in miniature. It covered just about every place you could imagine (and many places I’m guessing you’ve never heard of) including Moscow, St Petersburg, and many places we visited on our cruise. It was really well done, just as good as the one in Hamburg, and I definitely recommend it. 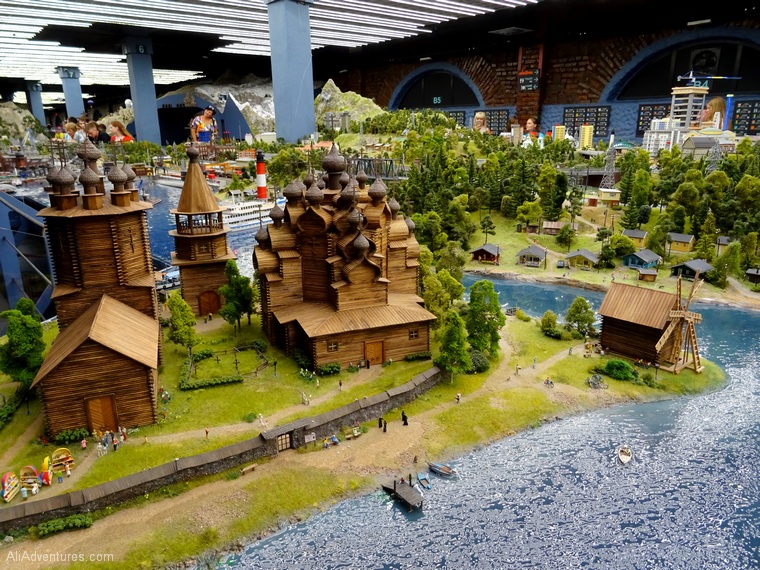 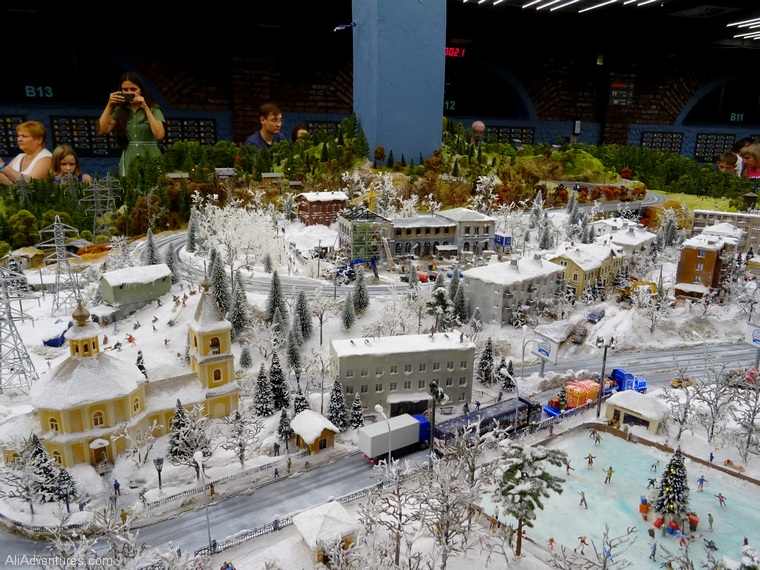 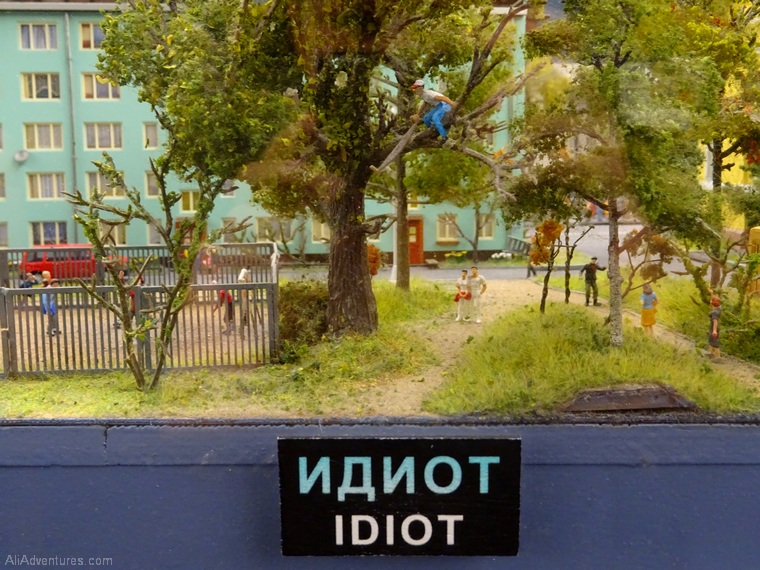 Overall, we had a really great experience on our Russia river cruise with Viking. Their main audience is older than us – most passengers were 60 and up, and I’d say there were no more than 10 people under 45. But they also don’t allow children, which was a bonus for us.

They were fantastic at working with me with my dietary restrictions. In general, I don’t eat gluten, dairy, eggs, and beans, and they didn’t hesitate to mark my file a couple months ahead of the cruise, plus the dining crew on board consulted with me every day to make sure I could eat something.

It’s a small ship with about 200 passengers, which meant no crazy large crowds to deal with. The group got split into smaller groups for excursions, but usually still big enough to need headsets. 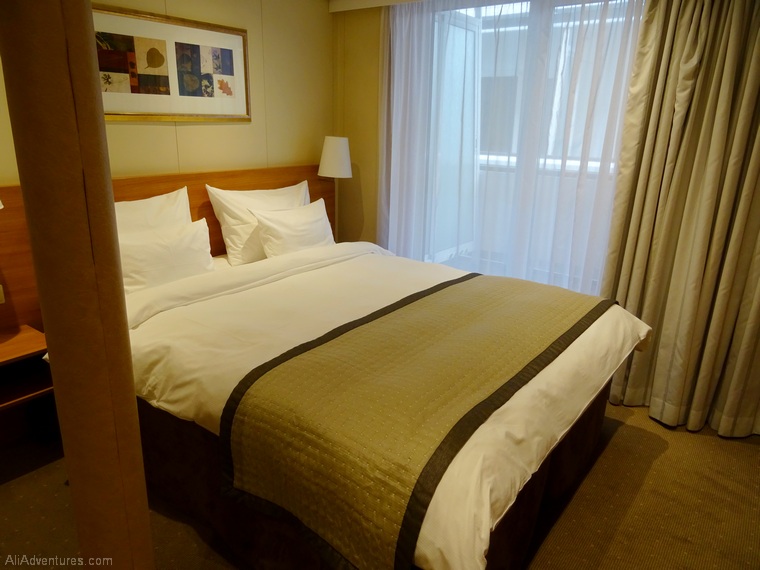 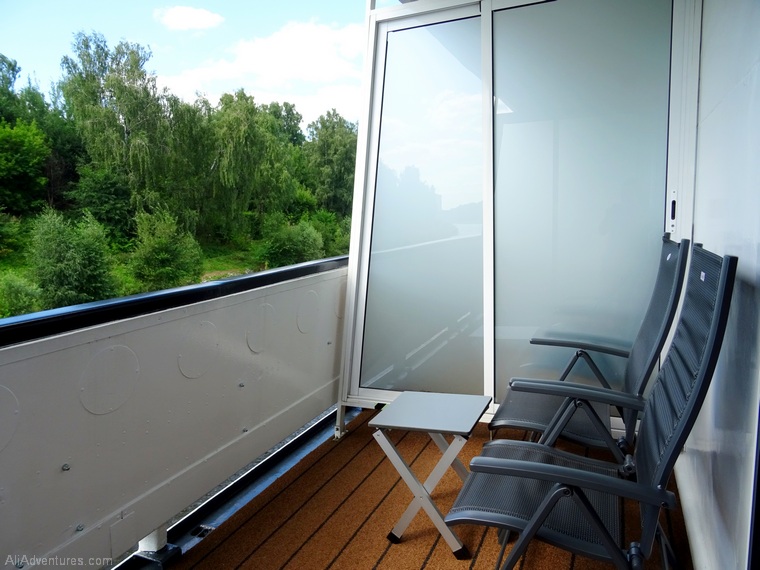 It was a little more restrictive than we’re used to since we typically travel independently, but if you’re not an experienced traveler and you’re looking for some of that organization, this could be a great option. Andy’s parents loved the cruise and said they would seriously consider taking another Viking cruise in the future.

Want to know more? Check out my post on Travel Made Simple that goes into more detail about the Moscow to St Petersburg cruise, activities on board the ship, and what it was like to be on a Viking river cruise.

Sign Up
Scenes From a Russia River Cruise: Part 1 Scenes From Finland: Turku and Helsinki