“I’ve seen some crazy stuff in Vegas, including Cirque du Soleil, but nothing like this!”

A couple months before my best friend Rachel came to visit, she told me she’d like to see a show at Moulin Rouge while we were in Paris. It was an expensive ticket, but as it turns out, it was quite entertaining and well worth the price.

The show was a fancy affair from start to end. We didn’t have to wear formal wear, but jeans, shorts, sneakers, and t-shirts were not allowed. After dropping off our stuff at the coat/bag check room, we were led to our seats. We didn’t spring for the dinner ticket, but we did get a bottle of champagne, some macarons, and a few little trinkets included with the price of our admission. 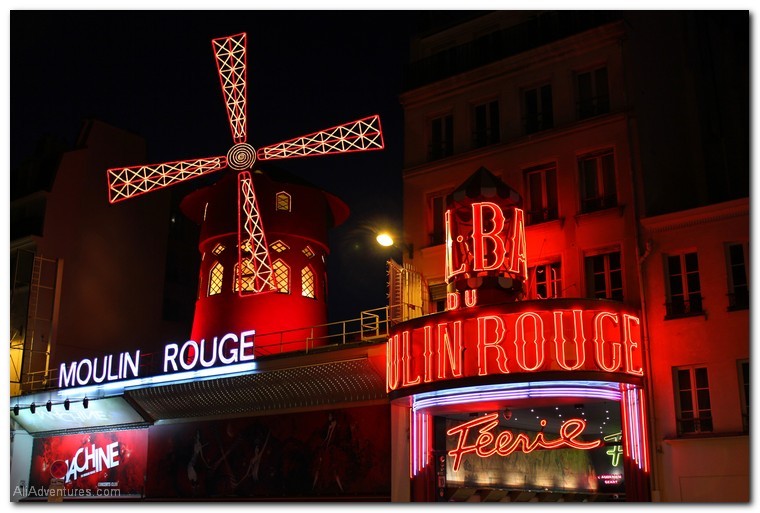 When the performance finally started, there was a lot of singing and dancing, pretty much what you would expect from a cabaret show at the Moulin Rouge. But our expectations were blown out of the water pretty quickly.

Most of the women were topless, which I guess was to be expected. We kept hoping the guys would take off their shirts, but instead they kept coming out in crazier and crazier sparkly outfits. Like one time when they were dressed like clowns.

Not that the women’s outfits were understated. They wore lots of sequins, feathers, and a wide variety of colorful sparkly things. While, of course, still showing their boobs. It might be a little shocking for Americans who aren’t used to so much nudity, but I also found it nice that they weren’t all big boobed ladies.

At one point, six women walked out on stage, each leading a pony. I wasn’t sure what to expect, but luckily it didn’t get any weirder than what it sounds like.

One of the most impressive parts of the show was a roller skating couple. I know that doesn’t sound too impressive, but they were roller skating on a small round platform, and after a few minutes, the woman was being flung around with leather strap attaching her head to the man’s neck. The speed at which she was being flung and spun was breathtaking. One wrong move and I imagine either of them could’ve broken a neck. It was amazing.

Later in the night, a dancing couple performed on a similarly small platform. Again, the woman was being hurled through the air at unimaginable speeds, but the added danger of being on wheels was removed this time. Instead, the dance tricks were more elaborate.

Another mind-boggling act involved a woman who jumped into pool with snakes. She danced on top of the pool for awhile, after it came out from the stage, and then she jumped in. She had multiple snakes crawling around her and wrapped around her arms, shoulders, and neck. Snakes are creepy, and I was really impressed with this woman.

The low point of the show, in my opinion, was when a guy came on stage to perform a comedy routine. He involved audience members, and since there were people from all around the world, he ended up with several people who didn’t speak English or French, and some of the skits kind of fell flat. I also didn’t think it really fit with the show.

Seeing a show at Moulin Rouge

Cameras were not allowed, but they had a professional photographer walking around before the show started. Rachel wanted the photo, so the photographer took our picture. When it was delivered to us later in the evening, it came with matchbooks with our faces on them. Really? Do we need our faces on matchbooks?

Our little gift pack also came with a booklet about the show, a couple key chains, and quite a few macarons. And of course the bottle of champagne. (I’m pretty sure when we booked our tickets it said half bottle of champagne, but we got a full bottle somehow. Not going to complain about that!)

We thought the dinner option was quite pricey (double the price), but we were very happy with our VIP tickets at 210 euros per person. We didn’t have to share our table with anyone else, our view was wonderful, we got to skip the line, and the staff were very attentive. I definitely recommend getting there early when the doors open so you’re not rushed. I’d also recommend not planning any early morning outings for the next day because you’ll be out late to see the show.

Even though seeing a show at Moulin Rouge probably isn’t high on the must-do lists of many straight men, at least those who get dragged along with their wives or girlfriends will get to see a lot of boobs. We talked to two couples who were sitting near us, and even the guys were pretty impressed with the show.

Overall, this was one of the most enjoyable experiences of our week. I expected it to be really cheesy, which it was in places, but the show was outstanding. Rachel and I had a great time, and I would highly recommend adding a Moulin Rouge show to your Paris itinerary.