In general, I do not like French food. It’s too fancy, and sometimes too weird, for me. So when my friend Rachel said she wanted to go to Paris while she came to visit me, I decided a food tour of Paris might be a good way to introduce her to French cuisine as well as give me a fresh perspective on it.

All about the bread

Paris is famous for its bread. Aside from the Eiffel Tower, images of baguettes are what often come to mind when people think of the city. So naturally our first stop was an award-winning bakery where we got samples of baguettes and croissants. Since I’m not eating gluten these days, I skipped the bread, but Rachel dug in. 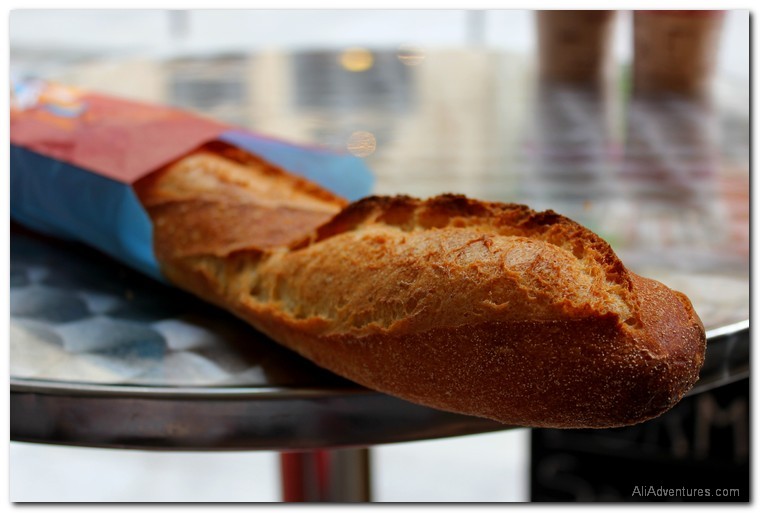 “This tastes like the baguette from the sandwich you bought from that cart earlier.” Apparently she, like me, does not have a refined enough palate to determine the difference between prize-winning bread and the cheap crap sold out of a truck on a street corner.

But we learned that the Baguette de Tradition is a protected food in France. It can only be made with four specific ingredients, and there is a price cap. We also learned that, despite being a famous French item, croissants were actually invented in Austria.

Come to think of it, that makes a lot of sense to me. France is somehow know for its bread, but after years of living in Germany, I can tell you this is the land of bread. Germans love their bread, there are more varieties than you can count, and there are multiple bakeries within a couple of blocks. Austrian history and culture is closely linked to German history and culture, so it fits that this famous bread was developed in Austria, not France. 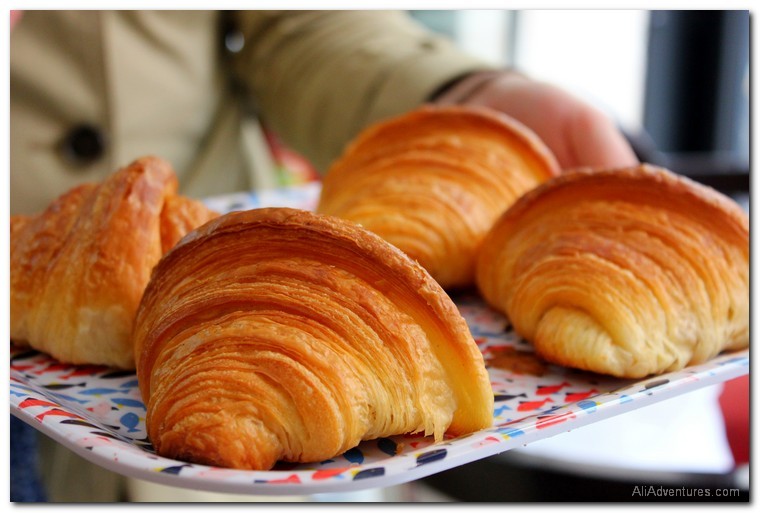 Next we walked into a shop with glass display cases and employees wearing white gloves. It felt like we had stepped into Tiffany’s or something. But no, it was a chocolate shop. The chocolate offered in the store is seasonal due to the herbs and fruits that are available. 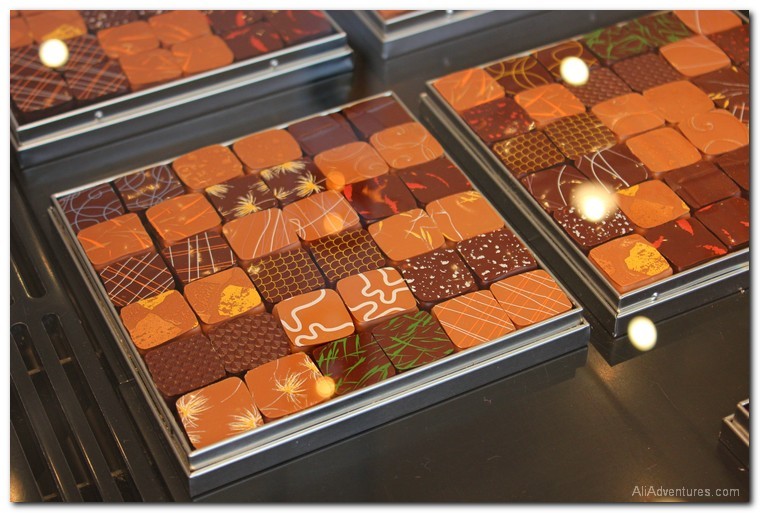 Aside from chocolates, we also tasted fruit and vegetable flavored candies. Yes, VEGETABLE flavors. They were interesting. Not something I’d go out of my way for, but I’m glad I tried them. My favorite item was the caramel. This was the most amazing caramel I’ve ever tasted! 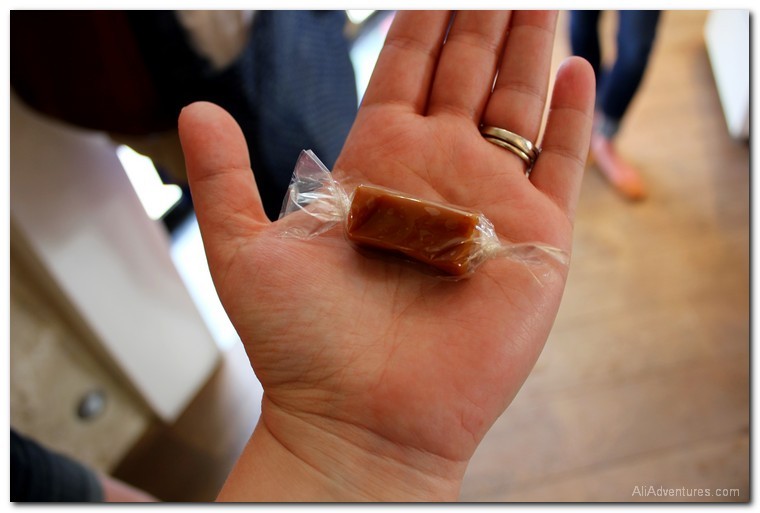 Andy and I have been doing a lot more cooking over the past few months, so I’ve been paying more attention to spices. The spice shop we went to on this tour mainly sells to chefs and had a lot of specialty items, including saffron that was locked up behind the counter. But they had so many other things to choose from: single herbs and spices, spice mixes, oils, vinegar, and so much more. I ended up buying two spice mixes that smelled good and looked like they’d be a little hot/spicy. 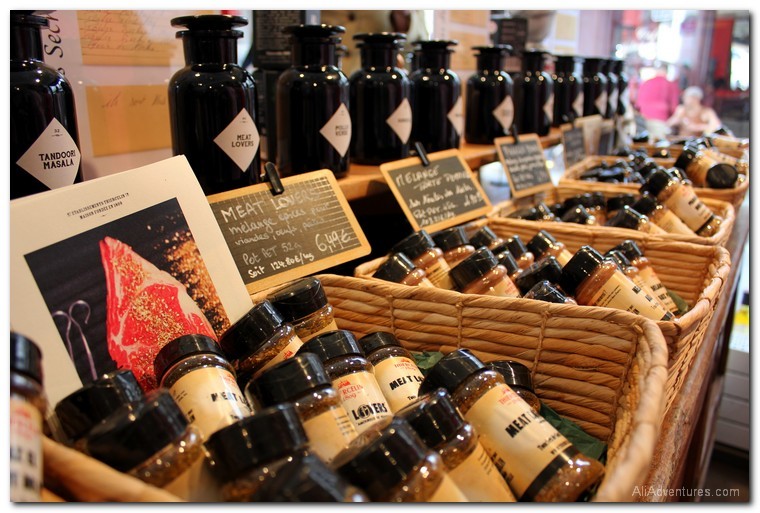 Gathering for the feast

At this point, we stopped tasting samples at the various shops. Our guide took us to markets selling pre-made food, like pâté, meatballs, salads, various prepared meats, potatoes, pasta and rice dishes, and vegetables. She brought us to a cheese shop and a butcher. But instead of letting us taste what was on offer, she purchased a few things and packed them up. 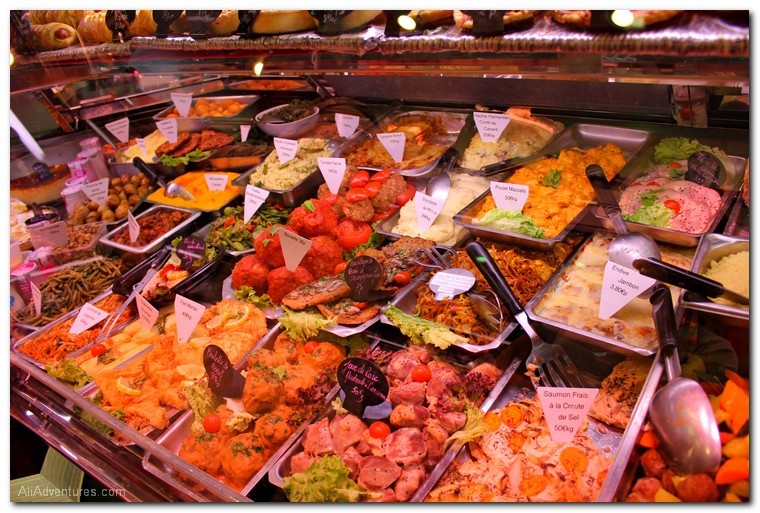 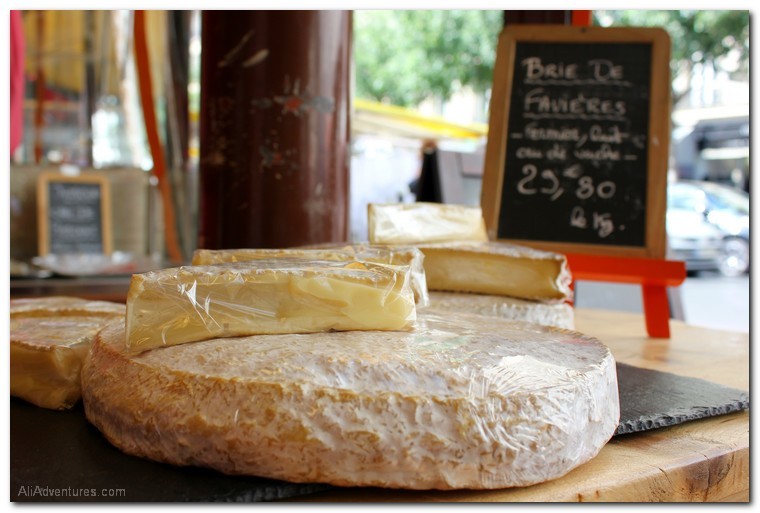 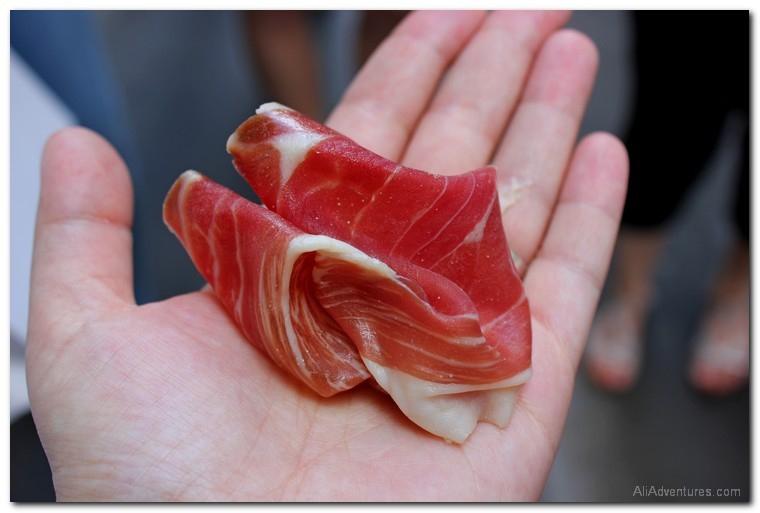 Finally we arrived at a wine shop selling high-end wine in boxes since the boxes are more eco-friendly and much less expensive, meaning you can buy the equivalent of four bottles of wine in one box. We tasted several varieties of red and white. Possibly a few too many varieties given how much trouble Rachel and I had finding the metro when the tour was over. 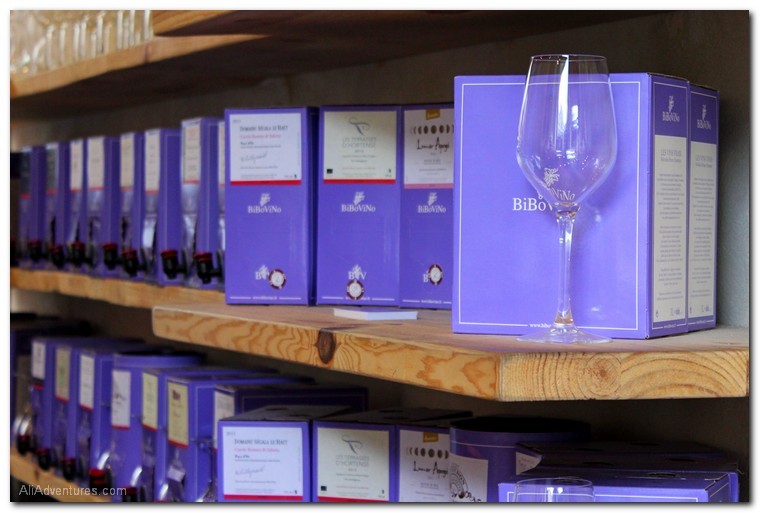 As we sipped our wine, the guide pulled out all the meats, cheeses and other tasty delights she gathered along the way. Though I’m not used to food tours gathering so much of the food for the end like this, it actually was quite nice. It gave us time to chat with everyone in the group and hear more about the food and wine, but we still had enough treats early in the tour to keep us going. 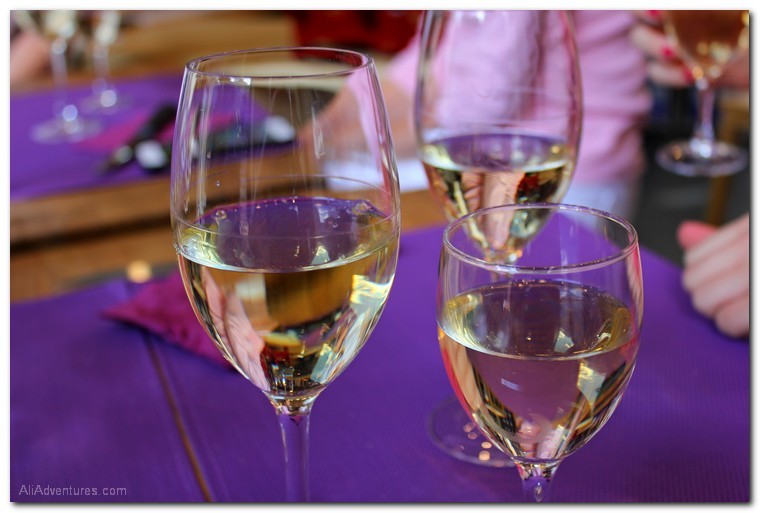 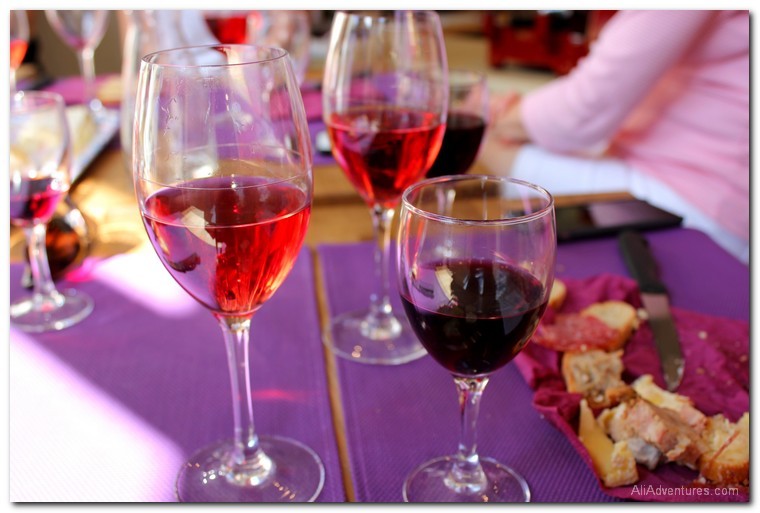 I mentioned to our guide that I’ve been having issues with dairy, but she told me that a lot of the cheese is made with raw goat milk which still has the enzymes that are supposed to help your body digest the cheese. I’m not sure how accurate that statement was considering how much pain I was in later that night. 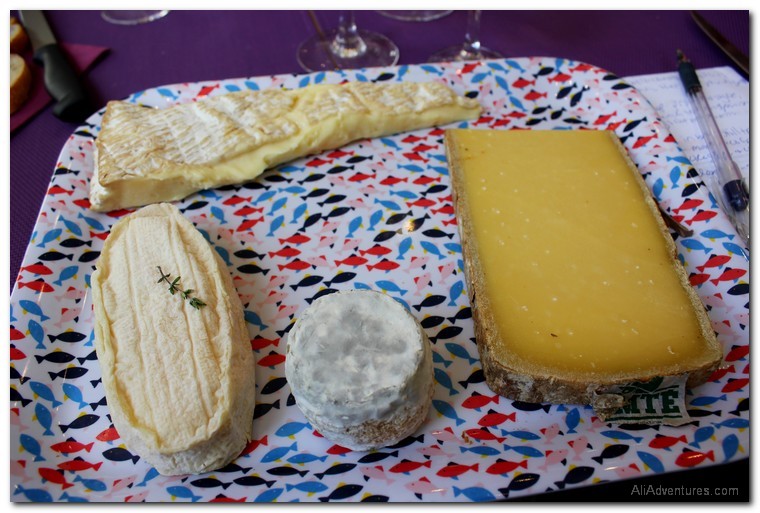 Regardless, I took her suggestion as an excuse to eat a bunch of cheese. I never thought I liked French cheese because I tend to enjoy harder cheeses, and French ones tend to be softer. But these were so good! We also ate salami and ham, pâté (which I still don’t like at all) and a few other things. The wine was kicking in at this point, so I stopped taking pictures and notes. 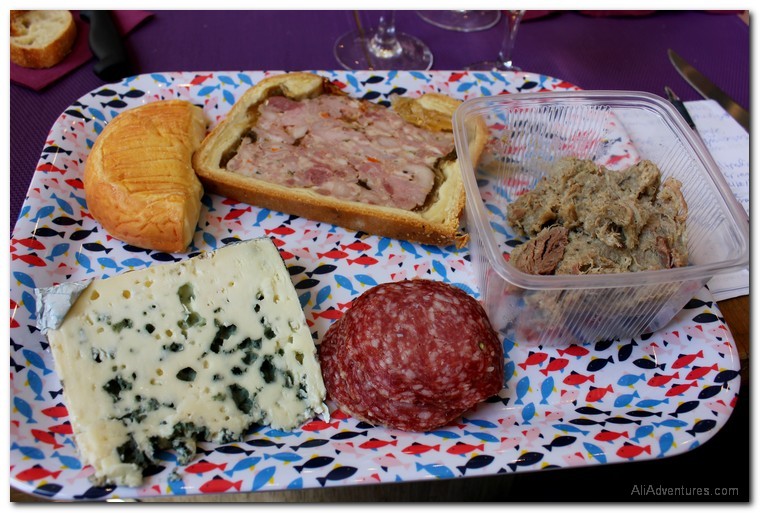 We took the Taste of the Marais food tour by Paris by Mouth. The tours are organized in different neighborhoods, and my friend Gigi, who loves Paris, said this is one of the best neighborhoods in Paris. We paid 95€ per person and well worth it! The group size was perfect, and Rachel and I had a lot of fun trying all the food and wine on the tour and learning some of the details and history of the food. The Paris food tour gave me a new perspective on French cheeses, even though it’s a little frustrating to discover I like some of them right as I also discovered I might have a lactose intolerance. It was one of the best food tours I’ve taken (do I say that every time?) and I would definitely recommend it!

Sign Up
Exploring the Bury St. Edmunds Abbey Ruins in England Stress is a Bitch