Learning to Make Pasta in Bologna

I’m half Italian, since both of my parents are half Italian, so I grew up eating lots of delicious Italian food. Pasta is one of my comfort foods. In Freiburg, there’s a pasta place we go to for lunch, run by a guy from Italy, and it’s some of the best pasta around. My favorite dish from him is spaghetti Bolognese, so when I was planning our trip to Italy, I knew I wanted to take a cooking class in Bologna to make this meal the right way. I spent a few hours at Podere San Giuliano, an agri-tourism restaurant and bed and breakfast where people often do cooking classes on vacation, and I learned a lot about pasta. And learning about food is one of the best things to do in Bologna.

Federica, one of the owners and my teacher for the morning, cleared up some important details first. The sauce is actually called Ragú, not Bolognese. And it should be made with tagliatelle, not spaghetti or other types of pasta. Tagliatelle is a long, flat, fresh (not dried) pasta. I also learned how to make tortelloni, which is bigger than tortellini. There are more types of pasta than I could ever count, and each one has its purpose. Details like this often get changed to suit local tastes when dishes are brought to other countries, or even in Italy in areas that have lots of tourists. 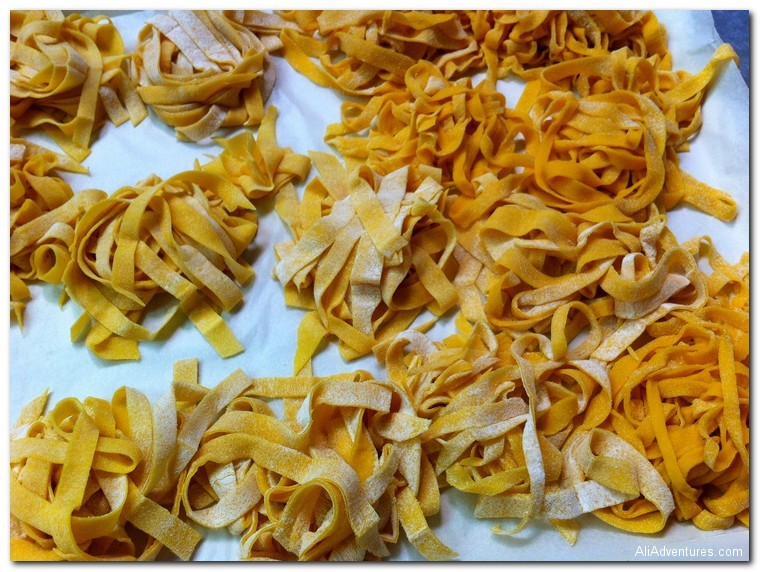 Ragú isn’t just meat and tomato sauce. We chopped up celery, carrot, onion, and I thought garlic, although the recipe they gave me does not list garlic. The vegetables were then put into a pot with some oil, and a little while later we added the meat, tomato sauce and wine. (I don’t like touching raw meat, so I was very happy the meat was in a bowl and I could scoop it out with a spoon.) To my surprise, the sauce sat and simmered for about two hours. At home I try not to cook meals that take longer than 30 minutes, but at least simmering for two hours requires very little supervision. 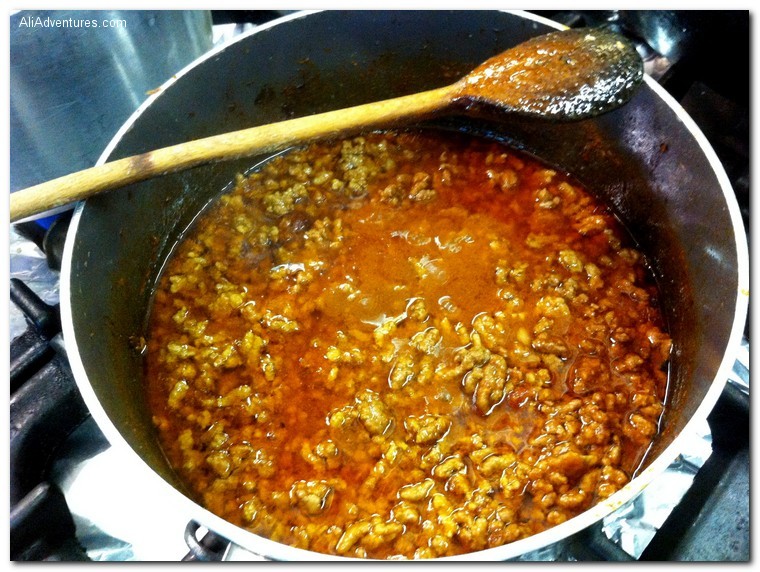 Pasta-making will not be my next career

Making dough for fresh pasta sounds pretty simple, but there’s a reason why most of us choose to buy dry pasta at the store instead. It’s just flour and eggs and a pinch of salt, but that doesn’t mean it was easy. I had to mix it together by hand, and I couldn’t get the hang of it. I was supposed to be using only my finger tips, but the dough ended up all over my hands. It took several minutes of scrubbing with hot water to get it all off when I was done.

Then I had to roll the dough with a rolling pin to make a big, thin circle. The actual rolling wasn’t so bad, but I couldn’t seem to make my dough into a circle. One ended up in a somewhat rectangular shape, and the other vaguely resembled Australia. 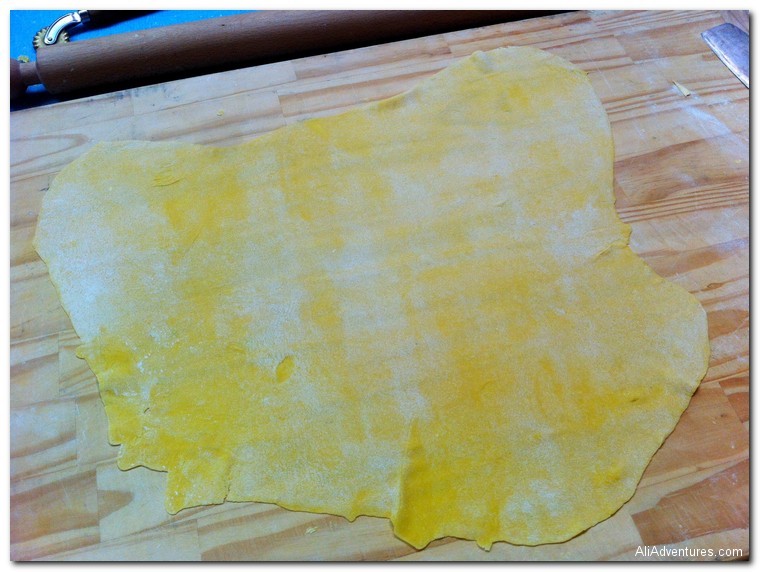 Finally it was time to cut the dough into pasta shapes. For the tagliatelle, Federica showed me how to fold the dough and then cut it into strips. Tagliatelle has a specific width, and since I’m an amateur, I’m pretty sure some of my pasta strips were too wide or too narrow, which technically makes them a different type of pasta. 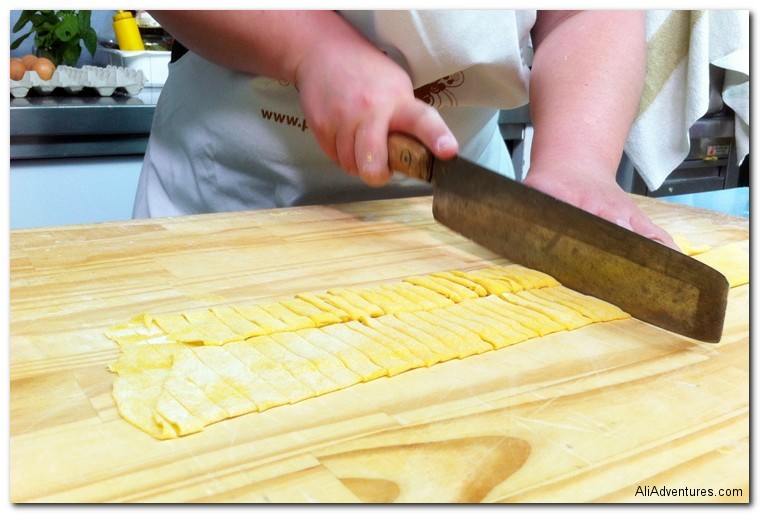 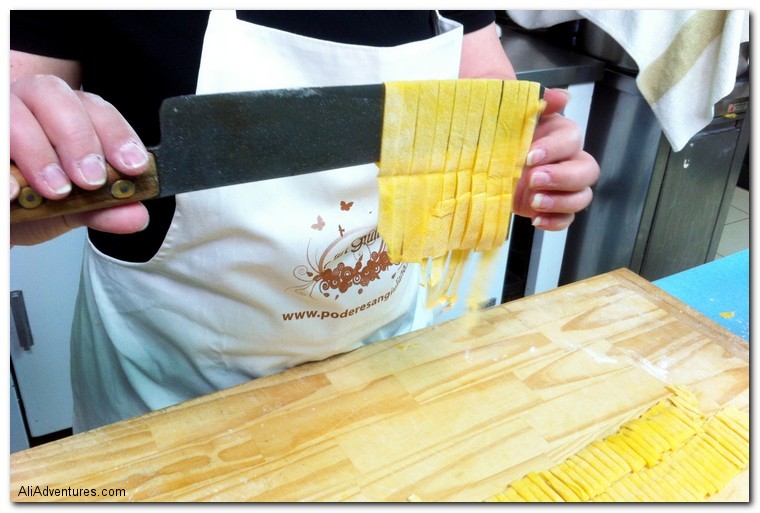 For the tortelloni, she showed me how to cut squares in the appropriate size. Then in each square we put a small amount of the cheese filling we made earlier in the day – ricotta and Parmesan cheese, an egg, garlic, chopped parsley, salt and pepper, all mixed together. Next was the hard part, for me anyway. Somehow folding the dough into the tortelloni shape was a bit difficult for me, and even when I got them looking close, I had a hard time keeping the pasta sealed around the cheese. 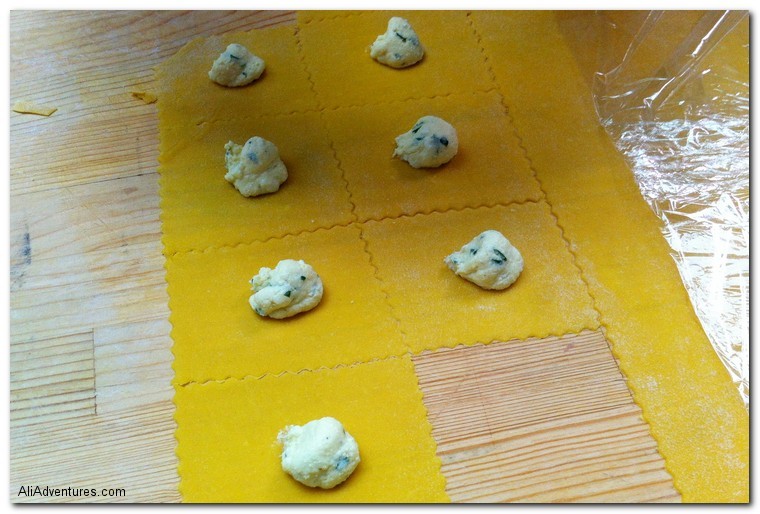 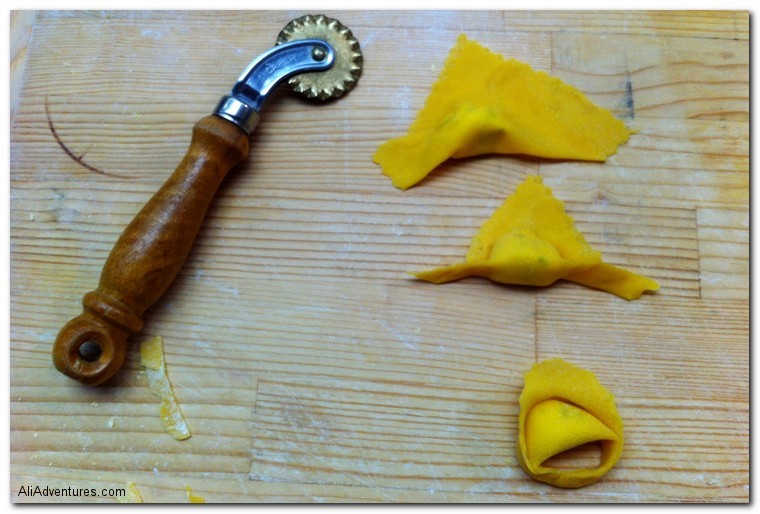 Eating is the best part of making pasta

Finally the food we had prepared all morning was ready. Federica and I, along with two other employees, sat down to a meal of tagliatelle with Ragú and tortelloni in a cheese and cream sauce. Does it surprise you when I say it was delicious? I loved them both so much, I couldn’t decide which I liked better. 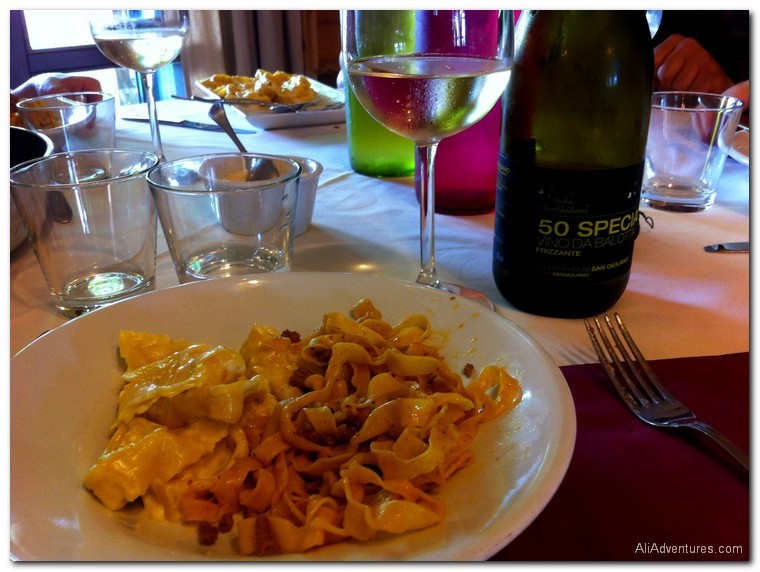 I really enjoyed my time at Podere San Giuliano. I loved learning how to make the type of food I grew up eating. I also liked that almost all of the vegetables are home grown on their farm. Occasionally they have to buy certain ingredients from outside sources, but they grown their own and keep things seasonal as much as possible. They even make their own wine, which I got to try at lunch. It is 45 minutes by public bus from the center of Bologna, but totally worth it. I’ve only taken a few cooking classes, but this was definitely my favorite.

Thank you to BlogVille and Emilia-Romagna Tourism for setting me up with this wonderful cooking class. As always, all opinions and decisions to over-eat are my own.

Sign Up
What If You Could Visit All of Europe in One Day? Balsamic Vinegar in Modena: a Non Foodie’s Thoughts