Cooking Class for One in Phnom Penh, Cambodia

After taking a cooking class in Bali, I decided it might be fun to try another one in Phnom Penh. I searched online and picked a school that had lots of great reviews, and the only negative thing anyone had to say was that there were too many people in the class. So I filled out the online form, paid the fee, and arranged for a tuk-tuk driver to take me the day after I went to the Killing Fields and the Tuol Sleng Genocide Museum.

The tuk-tuk driver didn’t show up, so I had to get someone else to take me. I should’ve taken this as an omen, because when I arrived at the restaurant I was told I was the only person who had signed up for that day. I assumed they would try to reschedule me or refund my money. But no, they said we’d still have the class. Just me and the instructor.

The instructor and I got into a tuk-tuk and went to the market where he showed me different fruits, vegetables, and fish. It was a really cramped, crowded market so I didn’t take any pictures. Then the tuk-tuk driver took us to where the class is held, which isn’t at the restaurant. As we began the actual cooking instruction, I realized just how awkward this day was going to be. 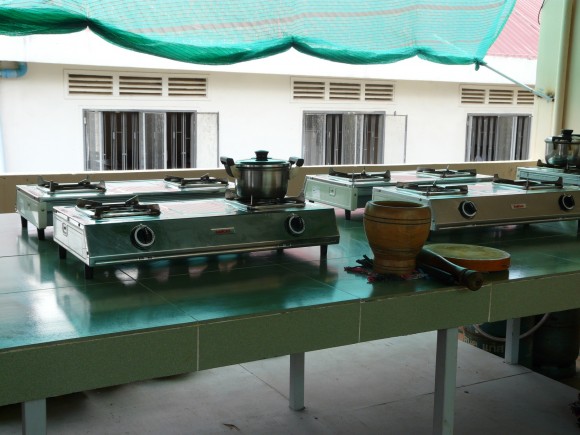 Since it was just me, I had no one else to rely on for help with understanding his heavily accented English. I had to do all of the hands-on things, whereas in the class in Bali, we all took turns. And we ended up with way too much food, so instead of little sample portions of everything, I had a full plate in front of me several times within just a few hours.

It didn’t help that I didn’t actually like any of the food that we made. Unfortunately I can be a picky eater, and I didn’t like the large amounts of peanuts that were in most of the dishes, and I didn’t like all the fish and shrimp paste. It was difficult to eat enough to not be rude but not make myself gag or eat enough for a whole village. He, of course, didn’t want to eat much because he makes this stuff almost every day with cooking classes.

So my advice when picking a cooking class? Aside from reading reviews, make sure you don’t hate major ingredients in the things you will be cooking, and make sure there are other people signed up for the same day before you commit.

By the end of the day, I think we both felt so awkward that he forgot to give me the recipes for what we cooked, and I couldn’t be bothered asking for it. Not that I would want to cook the dishes I didn’t like anyway. The food did look pretty, and I’m sure someone with less picky taste buds would’ve enjoyed it more. Here are some pictures of what we cooked: