How Much We Spent Traveling in Central America – Panama, Costa Rica, Nicaragua

Earlier this year, Andy and I spent 4 weeks in Central America in Panama, Costa Rica, and Nicaragua. We were traveling with Andy’s parents for the two weeks we were in Panama, and then we were on our own for two weeks in Nicaragua and Costa Rica. We did more activities in Panama than we did later when it was just the two of us, so the numbers will look a little different from one country to the next. Here’s how much we spent traveling in Central America for 4 weeks.

This does not include our international airfare, but we flew from Berlin to Panama City and from San Jose back to Berlin. We were in Central America for 29 nights. I’ve listed costs in US dollars and euros. 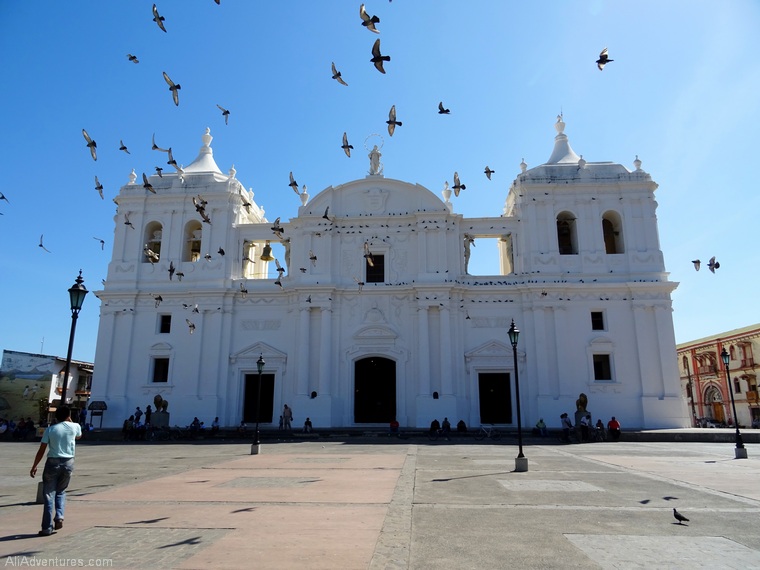 Here’s a breakdown of how many nights we spent in each country:

As I mentioned, during our 14 nights in Panama, we traveled with Andy’s parents. In Panama City, the 4 of us rented an Airbnb for 6 nights. We booked hotel rooms for 3 nights in Boquete and 5 nights in Bocas del Toro.

Once we were on our own, Andy and I tried to keep with our new approach to booking nicer hotels so we’re more comfortable. For the most part, we’ve outgrown cheap hostels, though occasionally we’ll come across a nice one that’s worthwhile. We spent 1 night in San Jose, Costa Rica before continuing on to Nicaragua. Then we spent 4 nights in Granada, 3 nights in Leon, and 2 nights in San Juan del Sur. Once we were back in Costa Rica, we spent 2 nights in Monteverde and 3 nights in La Fortuna.

Andy and I averaged $101.71 per night, or $50.86 per person per night, for 29 nights in Central America. The nightly average per country was $89.49 per night in Panama, $129.40 per night in Costa Rica, and $104.28 in Nicaragua. The averages in Costa Rica and Nicaragua are a bit skewed by the higher cost of the resort we stayed at in La Fortuna and the higher end hotel in San Juan del Sur.

If you’re on a tighter budget or you’re backpacking Central America, you can certainly spend less by skipping the resorts and staying at cheaper hostels or guesthouses. But for what we would spend on an average nothing special kind of hotel in Europe, we got much nicer and higher value hotels in Central America, so for us it was worth it.

>>Check out how to spend a week in Costa Rica.

Where to stay in Central America

Here are a few hotels we enjoyed and would recommend in Central America.

This was for our flight from Panama City to David, Panama in order to get to Boquete. It’s a short flight but 8-10 hours by bus, and it made more sense to fly. That number is for two people, so that’s $92.35 per person. If you’re on a tight budget but have plenty of time, the bus option is cheaper.

We used Air Panama for this flight because they leave from the domestic airport, which was a little easier than having to go back to the international airport to fly COPA. For some reason the Air Panama website doesn’t work for us here in Germany, but it’s totally fine in the US.

Since Andy hates flying, I didn’t put him on any other planes during our trip. We took tourist shuttles and long distance buses for most of our journeys, and this number also includes a few taxis and boats.

Getting around in Panama

In Panama, we arranged a taxi to pick us up at the David airport and take us to our hotel in Boquete. There aren’t a lot of options for that route, and splitting the taxi between 4 people was only $10 per person.

From Boquete to Bocas del Toro, we booked a shuttle through Hello Travel Panama because they run shuttles that don’t backtrack through David like lots of other transport options do. They also included the boat from the mainland out to Bocas. They’re located on the main square in Boquete.

Andy’s parents flew Air Panama from Bocas del Toro back to Panama City to catch their flight back to the US. It meant having to switch airports, but they arranged a transfer ahead of time through our Airbnb hosts.

Getting around in Costa Rica & Nicaragua

Andy and I booked a shuttle through Caribe Shuttle to get from Bocas del Toro to San Jose, Costa Rica. That particular route included a lunch stop at a resort in Puerto Viejo, Costa Rica, which is just over the border. Lunch was included in the price of the shuttle, so overall this was a good deal.

From San Jose, we took Tica Bus to Granada. This is not a tourist shuttle, but they were certainly used to foreigners being on the bus and helped us out with the border crossing since it’s a little chaotic. And this was still a few steps above a chicken bus experience.

In Granada, we booked a shuttle to Leon from Erick Tours which is a tour agency in Granada that we heard good things about. They’re the same people we used for our Masaya Tour from Granada. They’re located on Calle la Calzada, the main restaurant-lined street in Granada.

From Leon, we booked a shuttle to San Juan del Sur through the Via Via Hostel. They also booked us the Leon city tour we did while we were there. If you go there, be sure to stop for ice cream a few doors down at Kiss Me. OMG so good!

San Juan del Sur had a Caribe Shuttle location, so we used them again to get to Monteverde, Costa Rica. They were really well organized and efficient too, considering the distances. They had shuttles coming from various places and meeting up in one spot in Liberia, Costa Rica, where we all got out and swapped around based on final destination.

To get from Monteverde to La Fortuna, the best option we found was advertised as jeep-boat-jeep. It was a shuttle van that picked us up at our hotel and drove us to Lake Arenal. From there, we took a boat across the lake and then another shuttle to our hotel. Much better than the option that goes entirely overland. We used a company called Aventuras el Lago.

Our food and alcohol spending covers everything from super cheap to nice meals. For the most part, food in Central America is inexpensive, and you can certainly spend less than we did. Our meals at the resort in La Fortuna and the hotel in San Juan del Sur were more expensive than what you’d get at a normal restaurant in town, so that skews the numbers a little.

Our time in Central America was packed with activities, but more so in Panama than in Costa Rica and Nicaragua. Here’s a list of the major things we did and how much they cost per person.

Search for tours in Panama, Costa Rica, and Nicaragua.

Central America on a budget

Here’s where I think you can save money if you think Costa Rica is too expensive. In general, hotels, food, transportation, and activities were more expensive in Costa Rica as compared with Panama and Nicaragua. But they all offer very similar activities, landscapes, and experiences.

The cloud forest bridges were the same price in Boquete and in Monteverde. But the Boquete one came with a guide who told us about the forest, plant life, and animals, and it was a small group. The one in Monteverde was just an entry fee, so we were on our own. Well, on our own plus tons of other people. I liked the one in Boquete better.

Zip lining is cheaper in Panama and Nicaragua. Skip it in Costa Rica to save money.

All three countries have gorgeous beaches where you can go swimming, snorkeling, and many other activities. You’ll spend less if you focus on Panama or Nicaragua.

You can do coffee tours or chocolate tours in all three countries. Again, doing these in Costa Rica will be more expensive.

You can see animals in all three countries. In fact, we saw sloths in Panama and Nicaragua, but not in Costa Rica.

So overall, I think you get more bang for your buck in Nicaragua or Panama than you do in Costa Rica. The hot springs area of Arenal/La Fortuna is pretty unique to the region, and certainly there are other reasons to visit Costa Rica. But if your main objective is to see beaches and cloud forests and go zip lining, you can save a lot of money by traveling to Panama or Nicaragua instead.

And of course, if you’re traveling in Central America on a budget, there are plenty of backpacker hostels you can stay at and save money compared to what we spent on hotels.

Read more about what we did in Panama, Costa Rica, and Nicaragua.

This is for things like laundry, a few souvenirs, public bathrooms that charged, antibiotics (Andy is now 3 for 3 on getting sick when I drag him to developing countries…time for a break), and exit and entry fees charged by each country at land border crossings.

You can do this for less! Be a little more picky about activities you spend your money on. Stay at cheaper guesthouses or hostels. Skip the resort in La Fortuna (but really, if you have the budget for a splurge, you should do it because it was great!) and stay someplace like the hostel resort we found. Don’t splurge on drinking or expensive meals.

But also remember to have fun. Andy and I are not bare-bones budget backpackers, but we’re not luxury travelers either. We want to enjoy ourselves and the destinations we’re visiting, so we usually choose to spend a little more money for comfort.

Overall we averaged $242.55 per day, or $121.27 per person per day, in Central America for about a month. There isn’t much I’d cut out of our trip, and mostly I wish we had a little more time to spend there.