How We Spent 4 Days in Panama City

Panama might not be the most popular country in Central America, but it’s where our winter escape started this year, and I was surprised by how much I liked what we saw of the country. We began our trip in Panama City and found that there are a lot more things to do in Panama City, Panama besides the canal. Here’s a look at how we spent 4 days in Panama City.

Doing a full transit on the Panama Canal

The Panama Canal is the biggest draw for tourists in the city, and with good reason. It was built just over 100 years ago, and not only is it an incredible feat of engineering, but the canal drastically changed the world in many ways.

Doing a full transit tour on the canal was a bucket list item for Andy’s mom. Since the full transit tours are only offered once or twice a month, we planned our trip around that. We had to get ourselves to the marina by 7am, and the boat left around 7:30am. Snacks, drinks, and lunch were provided, and the food was pretty good. They also gave us plenty of information, in both English and Spanish, about the canal at various points along the way. You can find more info about the tour we took here.

While on the tour, we learned all kinds of interesting facts about the Panama Canal. Here are just a few:

It was actually a lot more interesting than I thought it would be to go through the locks and watch them work. And once we got into the lake that sits in the middle of the canal, the scenery was really pretty.

At roughly the midpoint, our boat stopped to let off passengers who had only paid for a partial transit. They were bused back to the marina in Panama City, and we continued on to Colon. To be honest, I think the partial transit was enough, and if the date of the full transit doesn’t work for you, you will still enjoy the tour as a partial transit. But overall, I’m really glad I got to do this.

We spent an afternoon wandering around the Casco Viejo neighborhood of Panama City. This area is the old town, and it’s an odd mix of new hotels and restaurants along with old, falling apart buildings.

Andy’s dad wanted to see the Panama Canal Museum, which is in the original building used as the headquarters when the canal was being built. It’s great to visit for those of you who want to see a little more of the history of the canal.

Since Casco Viejo sits on the water, it’s also a great place for views of the city’s skyscrapers.

Did you know there’s a train that runs parallel to the canal? I didn’t until we started researching this trip. Andy and his dad both love trains, so I set out to find a way for us to enjoy a train journey.

What I found was a tour to Portobelo, where there are several old colonial forts and some other historic buildings. We saw the old customs house and the church of the Black Christ and walked around the town a little.

The tour also included a visit to a zoo that’s really an animal rehabilitation center, and it was fantastic. The owner took us around to the different sections and told us about the animals. Many of them ended up there because someone thought it would be cool to have a monkey or some other exotic animal as a pet and later realized what a crazy idea that is. The owners are doing a wonderful job of caring for these animals. 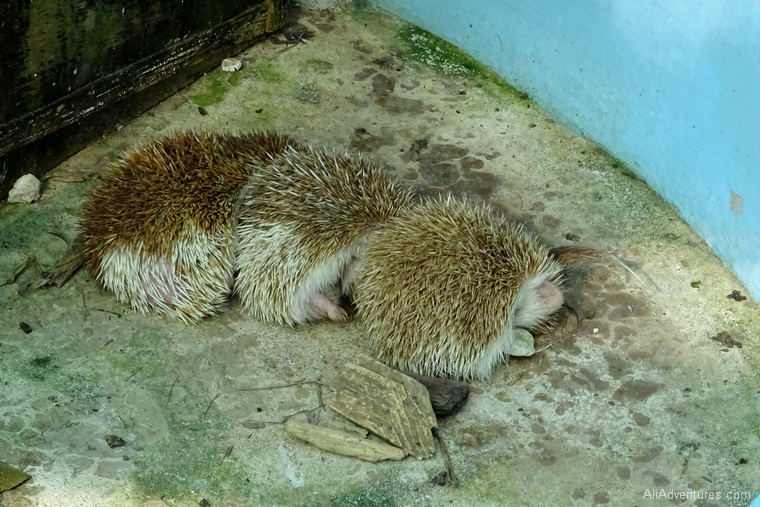 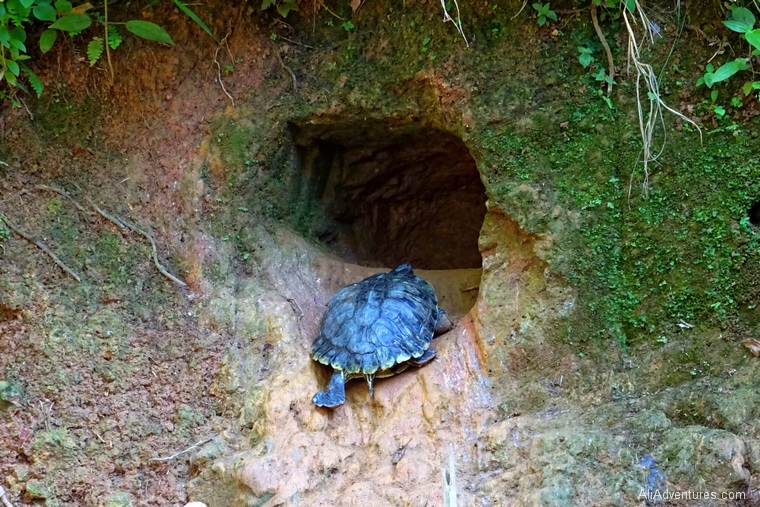 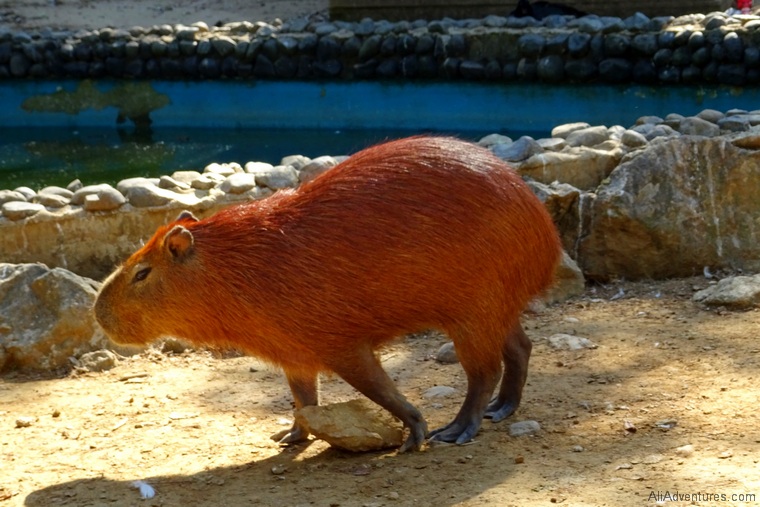 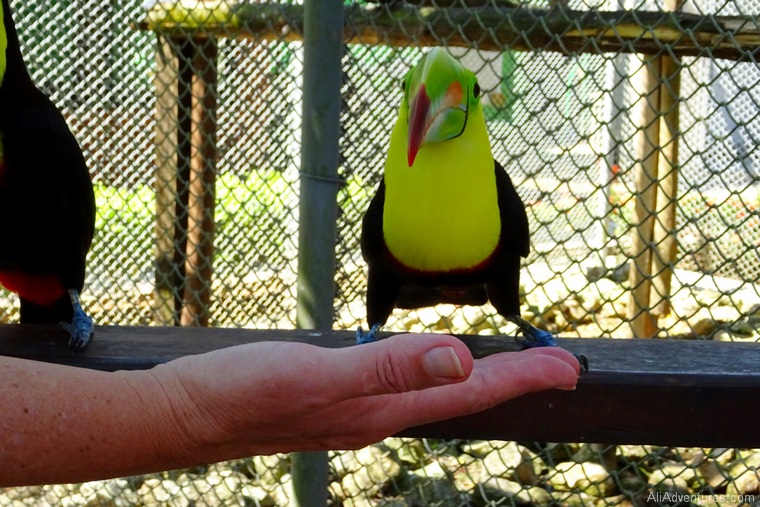 Since the tour started in Panama City and went to the Caribbean side, there was an option to add the train to the tour. The guide picked us up in the morning, took us to the train station, and then met us at the Colon station. We also stopped for lunch (not included) at a beachfront restaurant and had time to hang out at the beach before heading back to Panama City.

The guide was really great, and I loved this tour. As interesting as the canal was, this was probably my favorite day in Panama City. I highly recommend booking the Portobelo, Zoo and Playa tour with Panama Your Way.

Other things to do in Panama City, Panama 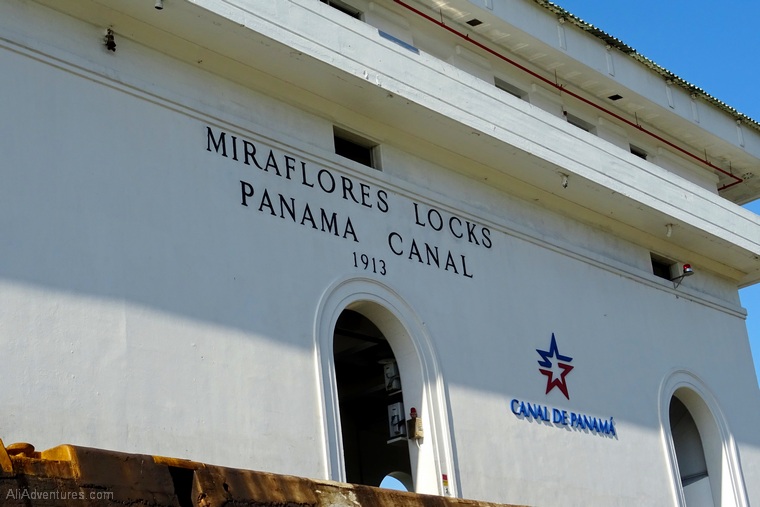 Andy and I were a little jet lagged, so we didn’t see as much as we could have. Andy’s parents were not suffering from jet lag, so they went to the Miraflores Visitor Center one day while we had a lazy day. The Miraflores Visitor Center lets you see ships going through the locks (if you go at the right time of day) and there’s a museum where you can learn more about the canal.

They also went to see the Bilbao statue which is near the coast. You could also go see the historical Panama Viejo area, which has some interesting ruins. There are also day trips to nearby islands, jungle tours, food tours, and much more. Search for tours in Panama City here.

Where to stay in Panama City

We found a great 2 bedroom, 2 bathroom apartment on Airbnb that worked well for the four of us. The hosts were so helpful, the apartment was comfortable, and there were plenty of restaurants and a grocery store nearby. It was easily one of the best Airbnb apartments we’ve ever rented. If you’ve never used Airbnb before, get a credit (and I’ll get one too!) towards your first stay here.

If Airbnb isn’t your thing, there are hotels all around the city. We stayed in the El Cangrejo neighborhood near the Via Argentina metro stop, and it was a nice area. You could also stay in Casco Viejo for a completely different vibe. Search for Panama City hotels here. 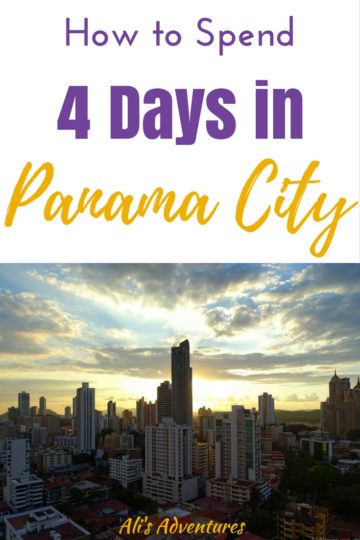 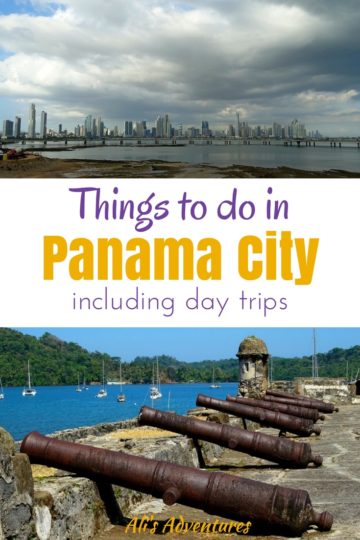