I’ve started making it a habit to look for food tours everywhere I travel. They’re fun, and I find them to be a really interesting way to try new foods and learn about the food culture and history of the destination I’m visiting. I thought I would find tons of fish dishes listed on the itineraries of food tour companies in Copenhagen, but I quickly learned there’s a lot more to Danish cuisine than fish.

The weather in Copenhagen proved erratic while I was visiting. As I left the hostel in the morning, the sky was blue with just a few puffy white clouds, though it was kind of cold. Just 10 minutes later, the wind picked up and the sky opened up on me. Luckily I was able to get under cover in time to avoid being completely soaked, and it gave me time to look at my map.

Because of course, I was lost again.

After wandering in the wrong direction for a couple of blocks (why aren’t there street signs at every single intersection?) I turned around and eventually found the right road. But still not the right building. I was just looking at random buildings for the right number when I noticed a covered market hall across the street. It seemed like a logical starting point for a food tour, so I checked it out.

Sure enough, there was the guide and the rest of my group. Apparently description on the website said the tour started in a covered market hall, but I booked a month earlier and forgot, and it wasn’t mentioned on my confirmation. 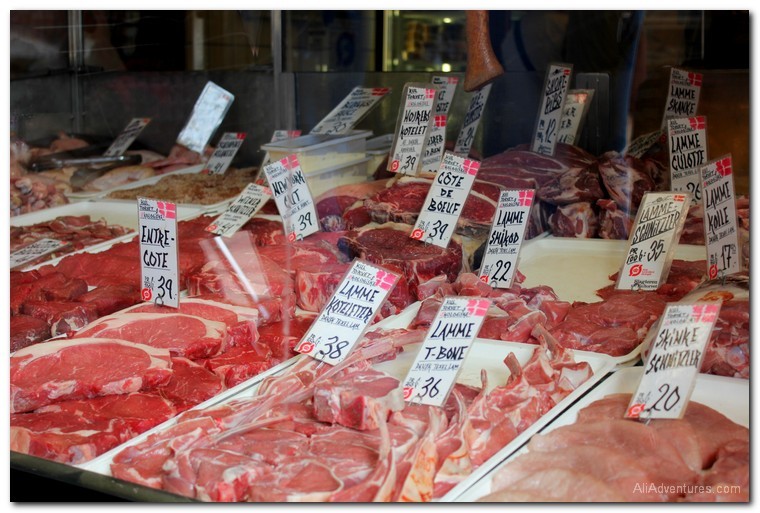 Once I arrived, last due to my confusion, our group went into the market. We started with some cheeses, preserves, and caramels, though I skipped the cheese. It was a tasty little intro to the tour.

The guide then walked us through the botanical gardens and talked to us how Copenhagen has been getting back to its roots with food. Lots of restaurants and other food producers are putting a big emphasis on locally grown, organic ingredients and ethically-raised animals. I always love hearing about that now that Andy and I are trying to eat healthier with more organic foods. She had a couple different kinds of honey for us to try at this point. They were of the same variety but sourced from two different places outside the city, and it was interesting to taste the differences.

Next up we went to a restaurant to try Denmark’s famous open-faced sandwiches. Although I didn’t know they were famous for this before booking the tour. It turns out they were a lot fancier than I imagined.

I’m not going to pretend to remember everything that was on each of these, but one had egg and shrimp, one had chicken salad, one had roast beef, and one had a cream cheese type spread. I only tried a little bite of the breads and only a little bite of anything dairy, but everything was really good. My favorite was the chicken salad one, second from the left in the photo. 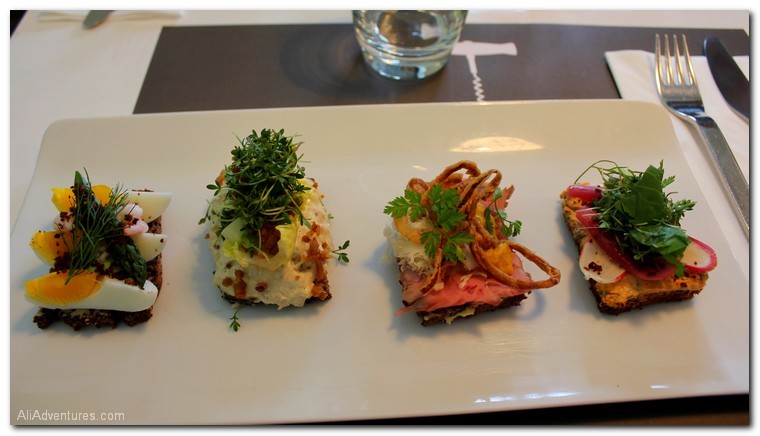 Our next stop was a local brewery. Again, I’m trying to avoid gluten, so I didn’t drink much here, but I couldn’t resist one sip of each kind. And one variety was a cider, which means no gluten, so I gulped that one down. I’m not much of a beer drinker anyway, but it was fun to taste some local varieties. 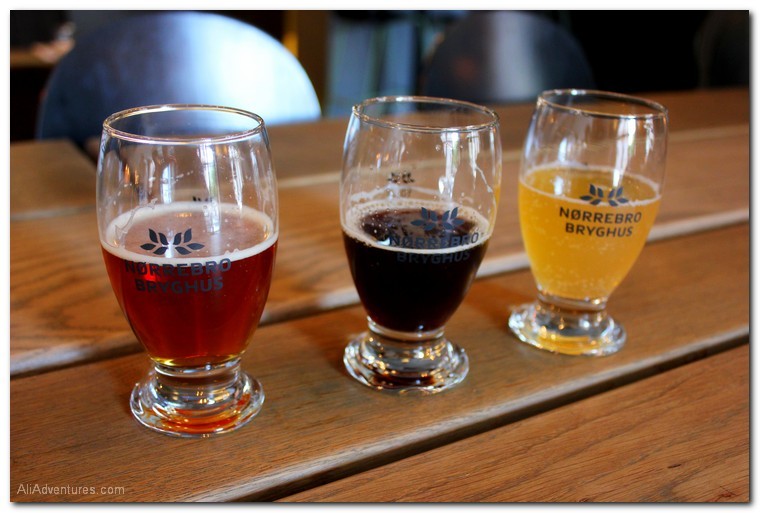 The other thing that intrigued me about the tour description was the mention of hot dogs. Really? This is a featured item on a food tour? But apparently Denmark is also known for their hot dogs, so we had to try them. Turns out these are not your average ballpark wiener. The hot dogs we tasted here are on the gourmet side of things and they come in several different kinds of meat: spicy beef, pork, goat (which also had bits of bacon in it), pork with cheese, chicken, and even a vegan option.

There were lots of different options, including one that came without a bun and had a side of mashed parsnips and potatoes. The bunless option sounded perfect for me, but I really wanted to try the classic hot dog. Luckily they were ok with making me a deconstructed version without the bun. It had ketchup, mustard, remoulade, fresh and fried onions, pickles, and beetroots. I also opted for the goat meat, because why not?

It was delicious. Ok I could’ve done without the beetroots, but other than that, this was one fine hot dog. 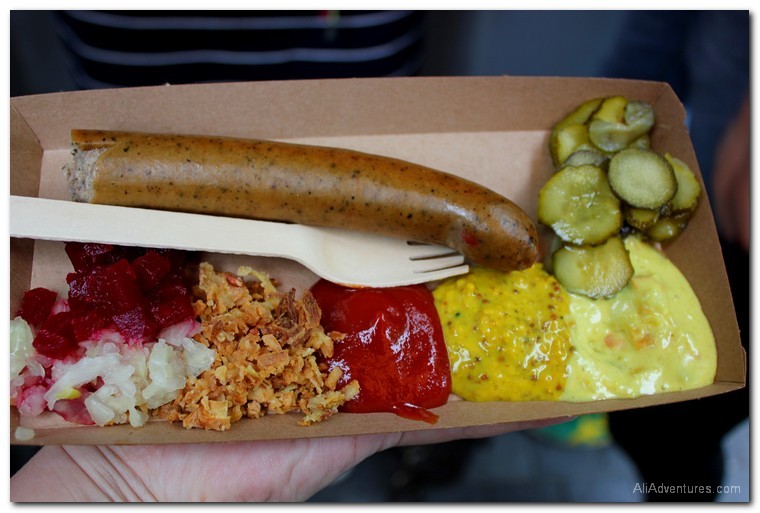 Following the hot dogs, we went to a candy shop where I bought two types of delicious hard candy. Which, of course, I ate without remembering to take a picture of. Then we went back to the market where the tour started for some tasty-looking, dairy-and-gluten-laden dessert thing that I sadly skipped.

I hated having to skip a few things here and there, but I really only realized the week before just how much dairy was affecting me. In the future I’ll do better about contacting the food tour company ahead of time to see about substitutes.

Overall this was a nice tour that introduced me to aspects of Danish food I didn’t know about. There wasn’t quite as much food as I’m used to on food tours; in fact this might have been the first food tour I completed without feeling like my pants were about to split open. I’m not sure if that’s a good thing or a bad thing.

I paid 700DKK for this tour with Copenhagen Food Tours, which is about 94€ or US$104. It’s probably the most expensive food tour I’ve ever taken, especially considering I felt like there was less food on it, but then Denmark is also more expensive than places like Italy or Hungary or Atlanta. I’d still recommend the tour if you’re going to Copenhagen, just don’t expect it to skip dinner that night.