We had great plans for our time in Brussels. Aside from seeing the city itself, we wanted to take day trips to both Brugge and Ghent, plus several other things. Most of those plans went out the window before we even got to Belgium when we realized we were trying to do too much, so we eliminated almost everything outside of the city except a trip to Ghent. It’s supposedly less touristy than Brugge, and we really wanted to see the Castle Gravensteen.

I love castles, and I love the idea of a moat. Somehow that represents a true medieval castle to me, but rarely do the moats, water and all, still exist. But this castle has a moat, at least partially on one side, and this excited me. Here’s a look at the moat through the castle walls. 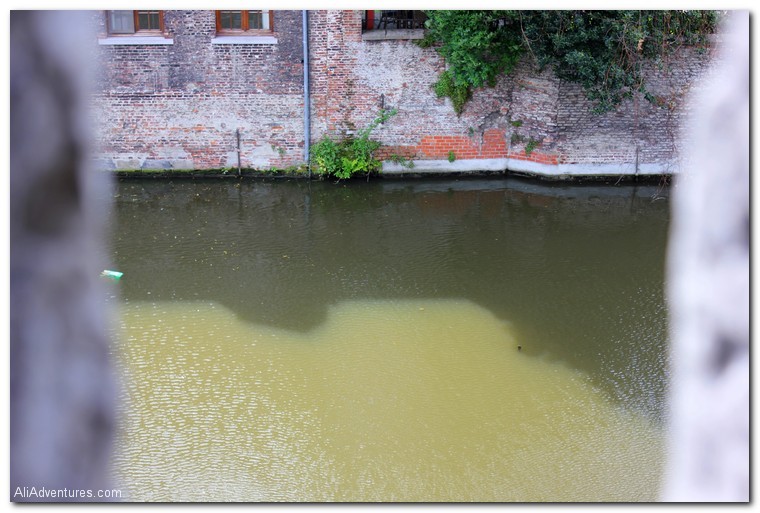 Though Gravensteen Castle is centuries old, it has been repaired and restored, so it’s in great shape. The inside is mostly set up as a museum with old weapons, models, and plaques in each room that describe what the room was used for. Interesting information, but not too museum-y, which I liked. It still felt like a real castle on the inside, not like a museum that just happens to be in a museum. 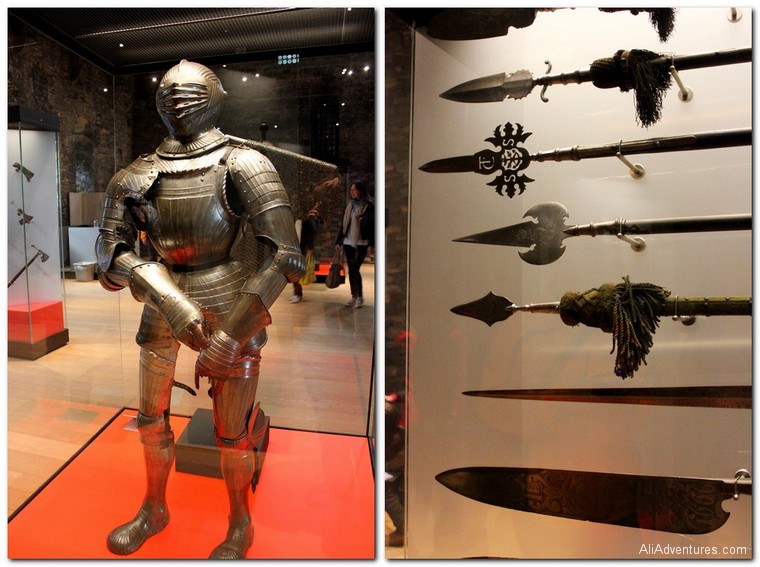 Outside you can walk around on the walls and see the castle on one side, and the moat and parts of the city on the other side. It was really windy the day we were there, so we didn’t stay on the walls too long, but I really enjoyed the views from up there. 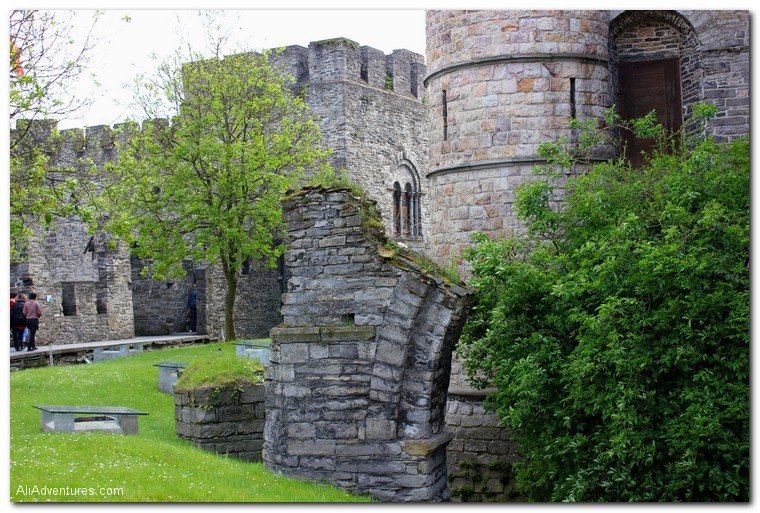 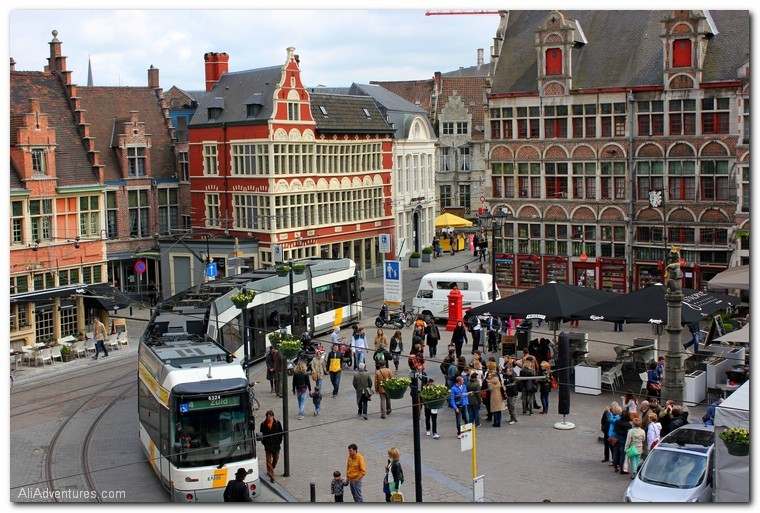 On top of Gravensteen Castle

My favorite part was when we were able to go up on top of the castle. Because it was so high up, we could see all around the city. But what I really liked was the sign letting us know that this was where “…the garrison could harass invaders. The projectiles were supplied through two hatches from a storage room.” I started imagining the French knights from Monty Python’s the Holy Grail throwing livestock over the side at King Arthur. 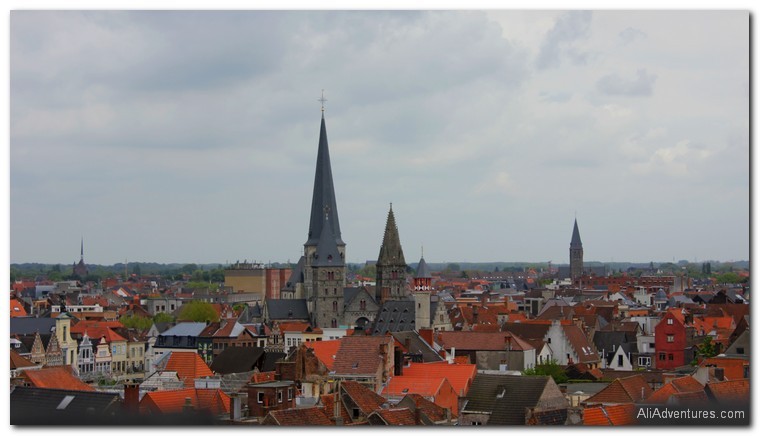 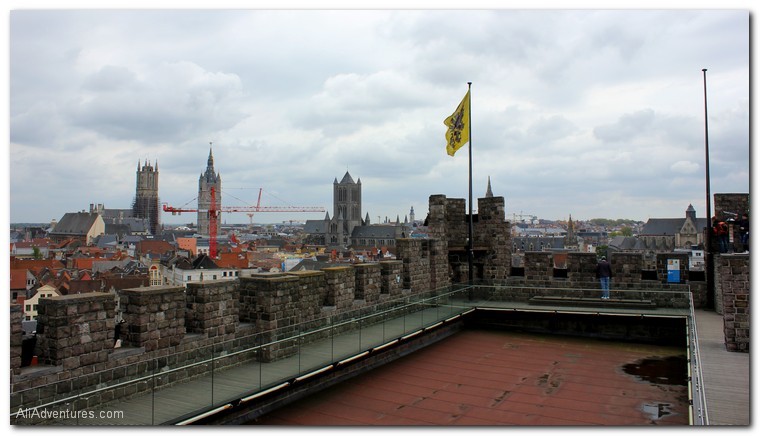 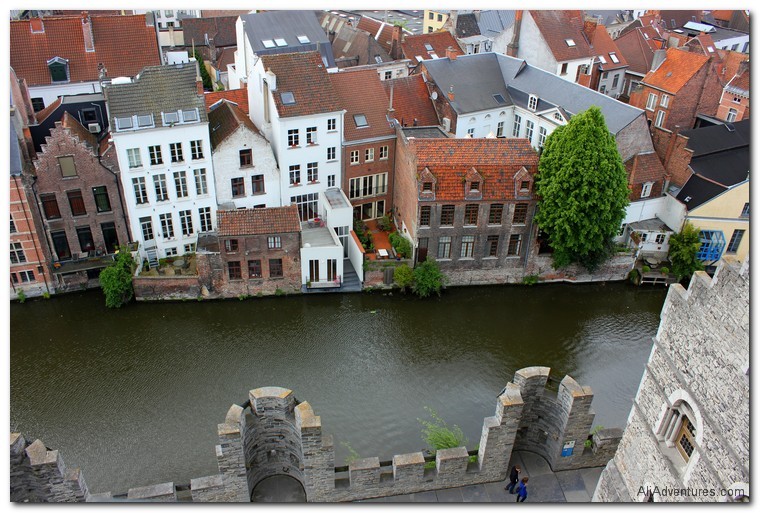 Ghent looked like a nice city to stay in for a few days, but if you’re coming as a day trip from Brussels like we did, the train takes about a half hour. We paid 9.60 euros per person for round trip train tickets. In Ghent, the public transportation tickets were 1.20 euros for a ticket that was valid for one hour. Entrance tickets to the castle cost 8 euros.

Ghent’s train station isn’t located very close to the center of town, but the trams are right out front. Take the number 1 line to get into the center. The castle is huge, you’ll see it on the right side of the tram as you’re going through the center.

Thanks to our friend Laurence from Finding the Universe for inspiring us to go to the castle he missed when he was in Ghent. 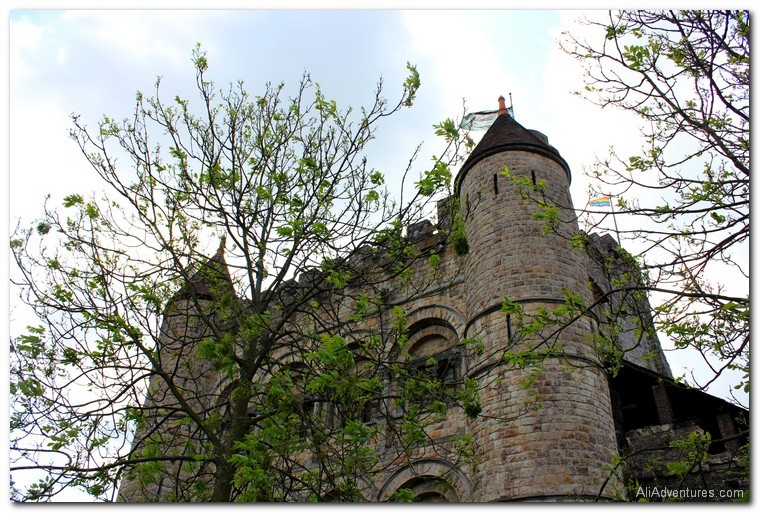 Also in Ghent: the Belfry

After exploring the castle and eating delicious waffles, we climbed the Ghent Belfry. It’s a big bell tower and for just 5€ you can climb (or take the elevator most of the way) up the tower and see gorgeous views of the city. This is a view of St. Nicholas Church. 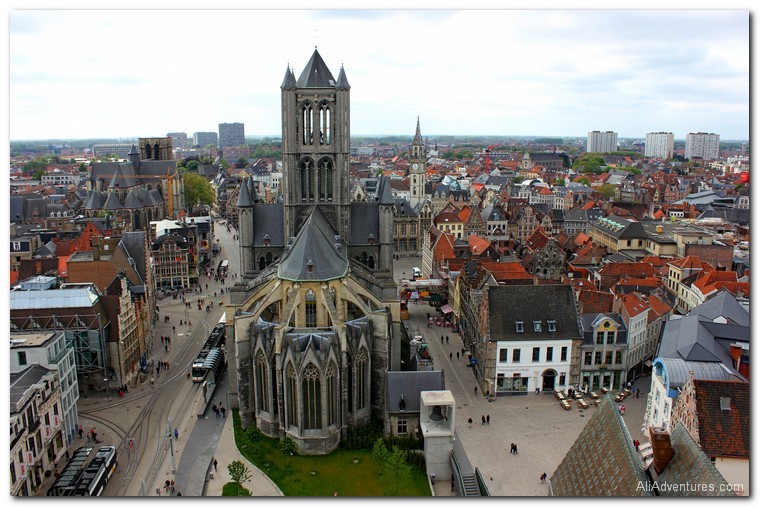