Traveling is Just Doing Laundry in Other Places

Andy likes to say that traveling is just doing laundry in other places. Which made me laugh the first couple of times I heard him say it. But then it really started to make sense. It’s the idea that it’s still your life. All the basic things you have to do when you’re home, you have to do while you’re traveling. Eat, sleep, shower. And if you’re traveling for more than a week or so, you probably need to do laundry. It’s not the glamorous side of travel, but I’ve found that doing laundry in other places can lead to some entertaining stories.

Last year when Andy and I were traveling in Europe for two months, we did our best to rent apartments that had washing machines. But in Brussels, we ended up with an apartment that didn’t have one, so we had to go around the corner to a laundromat. We saw a machine that sold detergent, but it took awhile for us to realize how to actually purchase it.

Turns out the whole place was controlled by one pay machine. So we had to find the number that corresponded with the detergent on that machine, go across the room to the pay machine and pay by entering the number we wanted (see the 20 and 21 on the photo below), and then the detergent would come out of the vending machine like a candy bar. We had to use the same pay machine to pay for the washer and dryer as well and enter the number of the washer or dryer we were using. 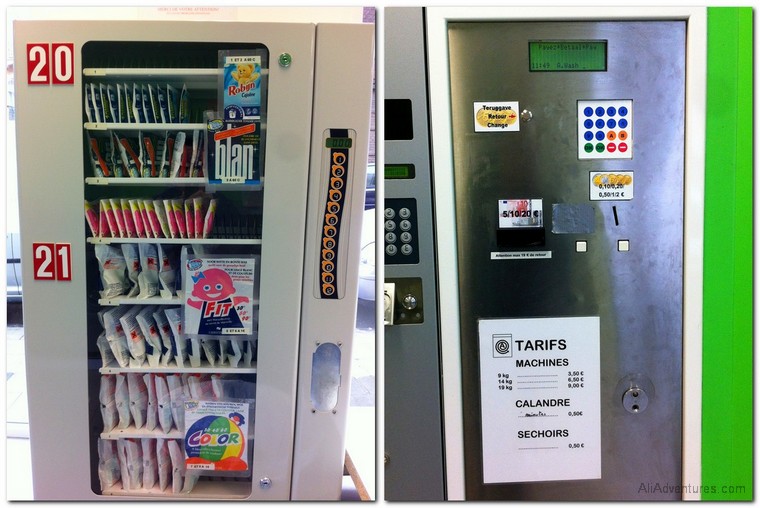 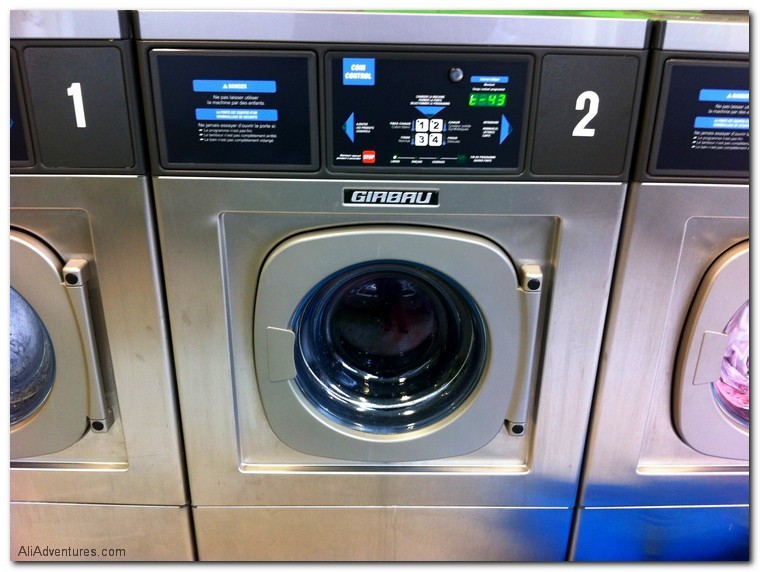 No naked laundry in Bologna

While in Bologna, there was a washer in the apartment, but the other bloggers we were sharing with were having problems with the machine. Not wanting to ruin our clothes, we decided to just find a laundromat. Amongst the signs telling you how much things cost and how to work the machines, we saw this interesting sign. 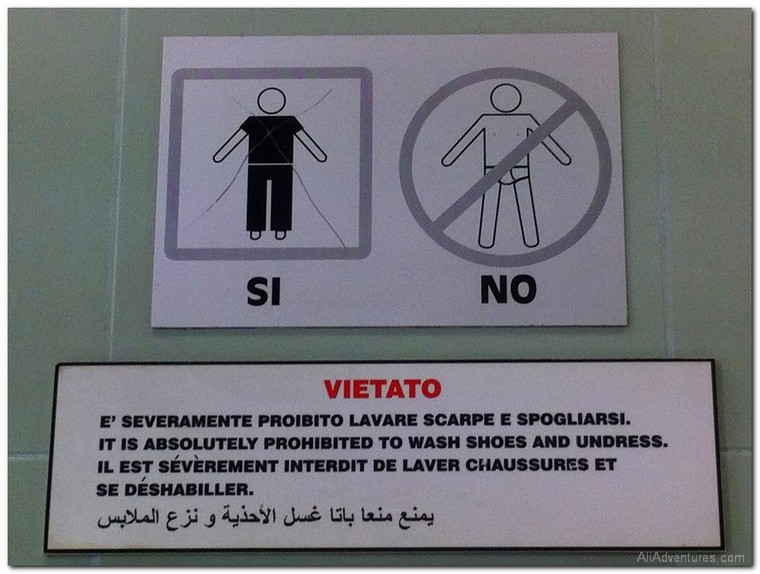 Maybe they had problems with people stripping down to their underwear in the past?

On our first or second day in Minori, on the Amalfi Coast, we decided to do laundry. Unfortunately we started the washer around the same time we were trying to cook something in the oven. Little did we know that, in many parts of Italy, the circuits can’t handle more than one “big” appliance at a time, and we blew a fuse. We had to call the owner, who had no idea what to do. It took her quite awhile to find someone who know where the switches were, but then we were back on track. 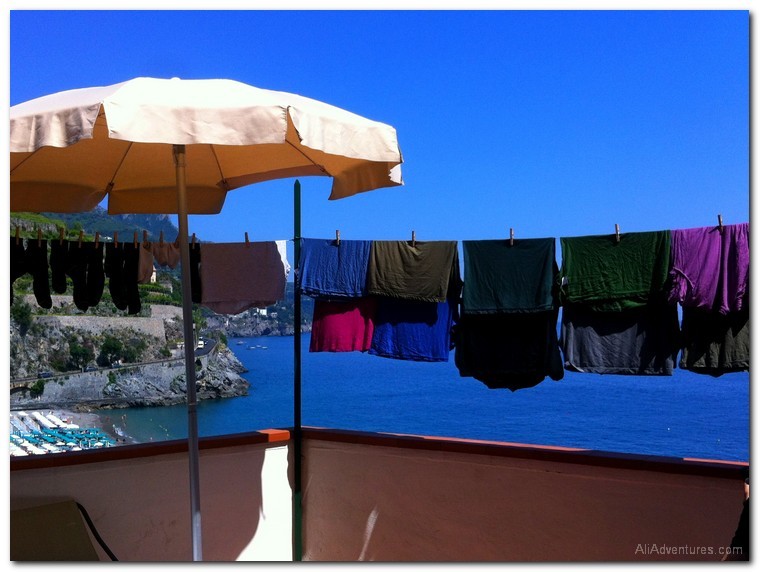 Side note, while in Rome the next week, I was blow drying my hair while the washing machine was running, and that blew a fuse as well. Apparently even a hair dryer is considered a “big” appliance. Consider yourself warned.

Click here to grab a credit towards your first stay with Airbnb!

Ao Nang was our last stop in Thailand, and just a couple days before we left for Malaysia, we did one load of laundry. I’m sure there are laundromats somewhere in Southeast Asia, but we didn’t see any, and besides, it’s incredibly cheap to have your guesthouse (or the one across the street in our case) do your laundry. But when we got our clothes back, we noticed something strange. Tiny pieces of yarn had been threaded into every item of clothing. I suppose this was to make sure our clothes all stayed together, but there were two or three different colors, so I’m not sure what the thought process was. We spent a good chunk of time gently pulling those strings out of our clothes and trying not to make bigger holes in everything.

The laundry lady in Siem Reap

Right around the corner from our guesthouse in Siem Reap was a tiny convenience store run by a sweet old woman who was constantly reminding us how to say “thank you” in Khmer. We brought her our laundry about three times during our 11 day stay. But during the second round, Andy noticed his favorite t-shirt was missing.

Knowing the laundry lady spoke almost no English, I typed into my translating app that we were missing a green shirt. When I showed her the Khmer translation, she shook her head and waved my phone away. Given her age and Cambodia’s history, I’m guessing she couldn’t read. But she called someone on her phone, handed me the phone, and I explained about our missing shirt. About 10 minutes later, the man who I assume actually does the laundry pulled up with Andy’s missing shirt. Crisis averted. 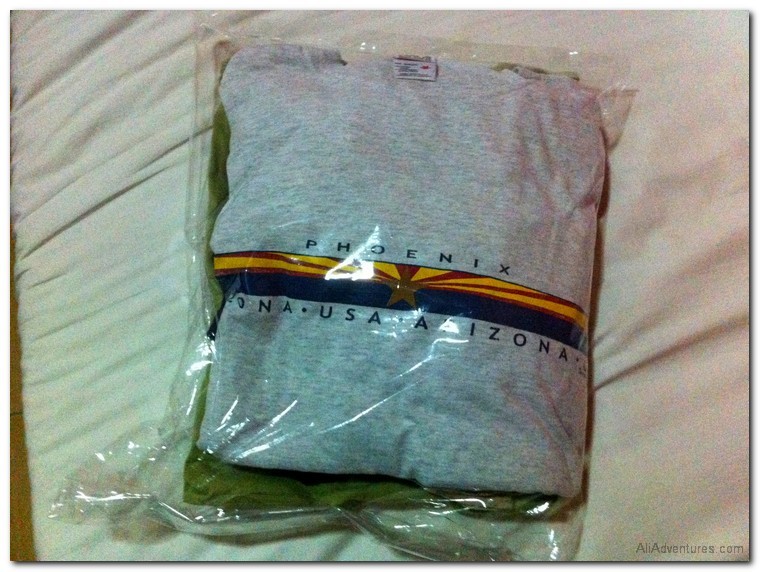 So don’t shy away from doing laundry while you travel. Even though you plan your trip to go see the famous sights or eat the delicious food, there is so much potential for interesting and even funny stories from the mundane activities like travel laundry. Travel is all about the experiences, but they don’t all have to be monumental.

Sign Up
Scenes From Thun, Switzerland Top Sights in Rome to See Other Tourists