Trapped in the Istanbul Airport and the Best Sandwich Ever

Originally our flight to Istanbul was booked for early afternoon on the Friday before Easter, but a few days earlier we got an email from Turkish Airlines letting us know the flight time had changed. We would now be taking off around dinner time. It’s almost a three hour flight from Basel, Switzerland to Istanbul, plus Turkey is one hour ahead of Germany, so we weren’t happy about this, but they only had one flight a day so we were stuck.

Andy and I have a bad habit of arriving somewhere only to realize we don’t know how to get to our hotel. So this time I made sure to find out how to get from the airport to our hotel and had Andy print out a map from Google. But after we paid our US$20 for a visa and snaked our way through the long passport control line, we found out the metro stopped running at midnight, not 1AM like we thought, so we had to find alternative transportation. The creepy guy hanging out near the closed airport metro station hoping to scoop up tourists like us was not an option.

Getting outside seemed to be the logical next step, but it was more difficult than you might imagine to actually exit the building. We couldn’t go back the way we came because the doors were locked. We took an elevator upstairs, saw buses through a window, but kept getting stuck in a third dimension of airport stairwells.

Finally we broke free. Darting through the lines of taxis and waiting relatives, we made it to the shuttle buses. No one really spoke English except to confirm that the bus did in fact stop at Taksim Square, which was where we needed to go. After paying 10 Turkish Lira each (about US$6 or 4€) for our tickets, we finally relaxed and gazed out the window. 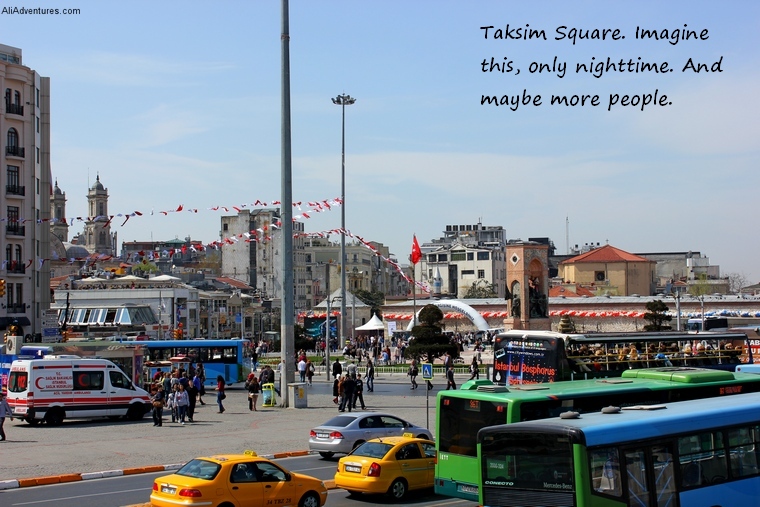 By the time the bus got to Taksim Square, I realized I was starving. I didn’t really care that it was 1AM, I needed food. Luckily Taksim (and most of Istanbul really) appeared to be a place where no one really slept. (Sorry, I wasn’t in the proper frame of mind for taking pictures.) We saw dozens of restaurants along the perimeter of the square, so it was just a matter of finding something quick to eat. A few menus looked a little pricey, but then we passed a street vender. Several steps later, I stopped, looked back at the cart longingly as the smells finally registered in my brain, and decided that’s what I had to have.

Again, I wasn’t taking pictures, so you’re going to have to use your imagination. Picture a street cart with a grill. There’s a small crowd waiting anxiously for their 1AM lamb meatball sandwiches. There are two cops standing off to the side who look like they might be ready to issue a warning to the street cart vender about illegal business activities, but then you realize they’re just ordering sandwiches. There are a four men standing behind the cart, and though it seems odd, you realize they all work there. One guy flips the meat and constructs the sandwiches. Another guy sprinkles spices on them and wraps them up. “You want spicy?” he asked me. Yes please! A third guy handles the cash. And the fourth guy…well, I’m not really sure what he was doing but he clearly was employed by the sandwich cart. 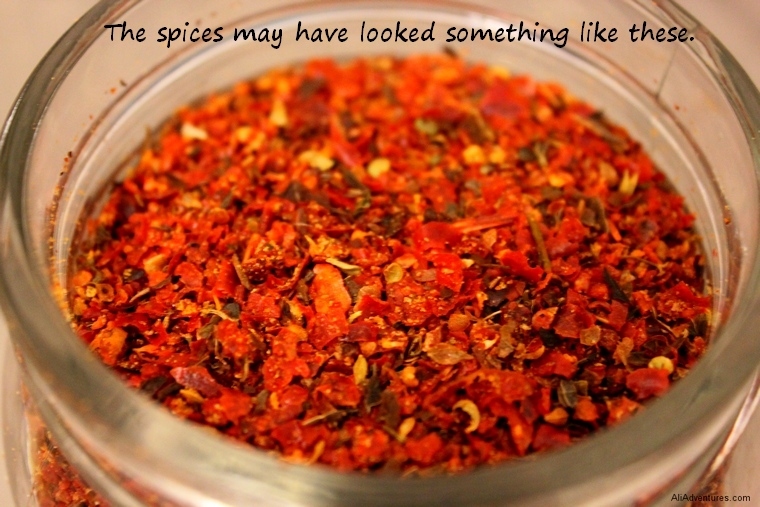 We wandered through the streets towards our hotel, and I began to eat my sandwich. I was in heaven. The bread was simple. The lamb was warm and juicy. The onions and tomatoes were fresh. And the spices…oh the spices! I couldn’t believe I only paid 4 Turkish Lira for that delicious sandwich AND a bottle of water. We were totally lost because Google maps didn’t quite compute our destination correctly, and we were winding through narrow streets that seemed kind of creepy. (In the light of day we realized they were not creepy, but arriving somewhere at 1AM can have that effect.) Our bags were getting heavy, and it took about three times as long as it should have to finally find our hotel. But I didn’t care. I had the best sandwich ever, and all was right with the world.