After getting settled into our amazing over the water bungalow in Bora Bora, Amanda and I weren’t quite sure how we were going to occupy ourselves. We expected to go swimming and snorkeling and do other outdoor things, but the horrible rain was making it difficult to stay outside for more than a few minutes at a time. For the majority of the next 48 hours, we were rained in in paradise.

We did get an impromptu tour of the private island from a guy who worked for the hotel. It’s not a big island, so we walked around most of it and went up to the look-out on top. From there we could see the bungalows where we were staying as well as the ones at the hotel’s other location. Even with the storm clouds in the sky, it was an amazing view. I’m sure it would’ve been a great place to watch the sunset, if only the sky would clear up. 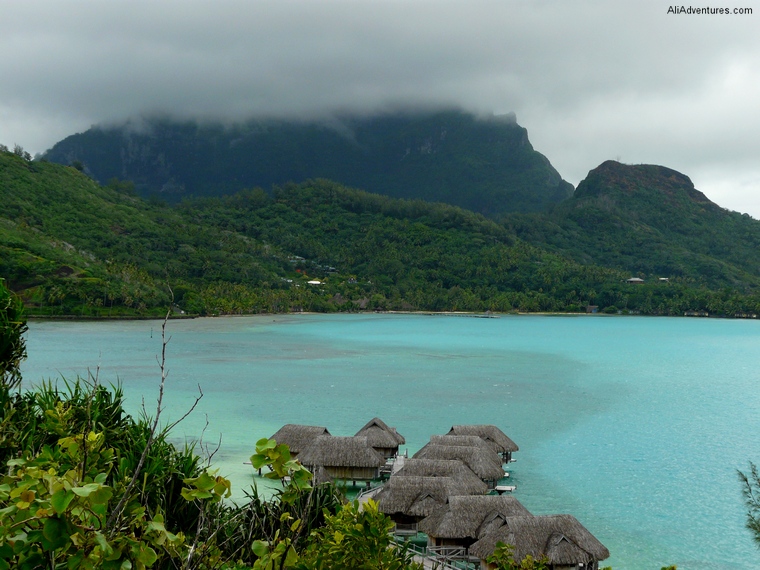 Meals were interesting. We weren’t on any sort of all-inclusive package, and our location was so secluded that our only choices for sustenance were our hotel’s two locations. Even though I expected high prices and I knew this wasn’t a budget location, it was still painful to look at the menu. A hamburger with fries and a Coke cost me about US$30. Dinner the first night was so expensive that we decided to just have tapas at the bar on our second night. The bar area was partially opened to the outside which meant a stray cat kept wandering over to our table, and at one point it came millimeters from stealing a chicken wing off my plate. Amanda even skipped lunch altogether one day because it was too pricey.

We had direct access to the water from our balcony, so we tried snorkeling during a break in the rain, but the water was so rough it made me feel sick. Anytime we wanted to use the super expensive wifi (really, not included with the already high price of our room?) we had to get the front desk to call the boat to take us to the main location because the storm had knocked out the wifi on the private island. At night the rain, wind, waves, and thunder made me worry that our little hut would collapse into the water. It was like we had signed up for a luxury hurricane, and I was beginning to wonder why I was even there. 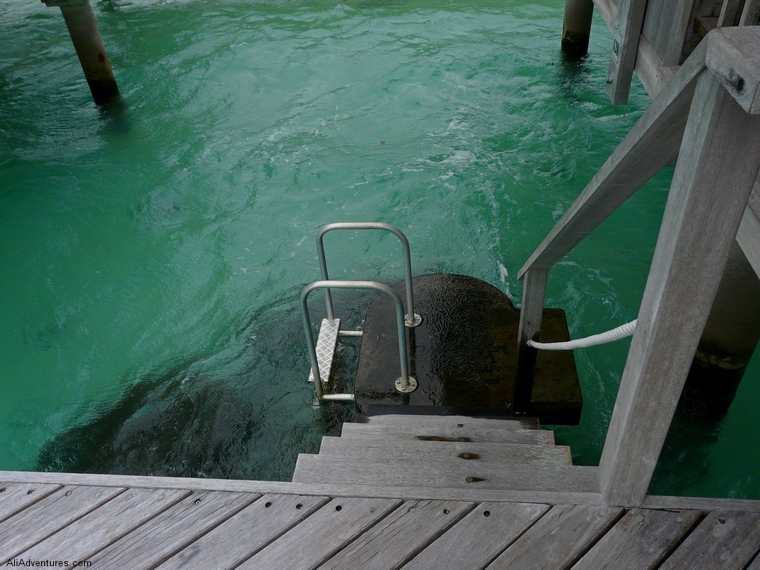 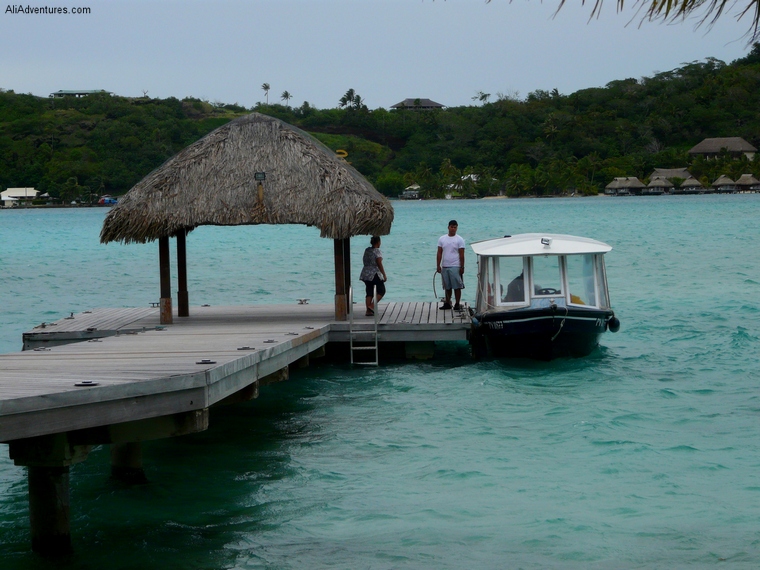 The part of staying in an over the water bungalow that excited us the most was the big glass “window” on the floor. At night a light under the bungalow attracted fish so we could watch them swim. However, watching wasn’t really good enough for us, so when we noticed tiny notches in the floor, we realized others had pried up the glass. We followed the example set by our bungalow ancestors, propped up the heavy glass with a hanger and a spoon, and started throwing bits of bread down to the fish. 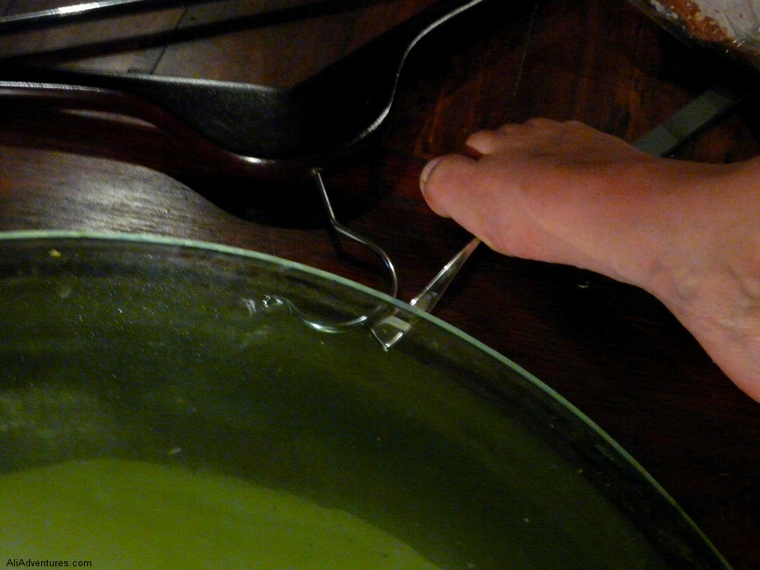 The next day we asked some other guests if they saw many fish under their bungalow. Their response was “no, only a couple.” I guess they were all over at our place. Oops. 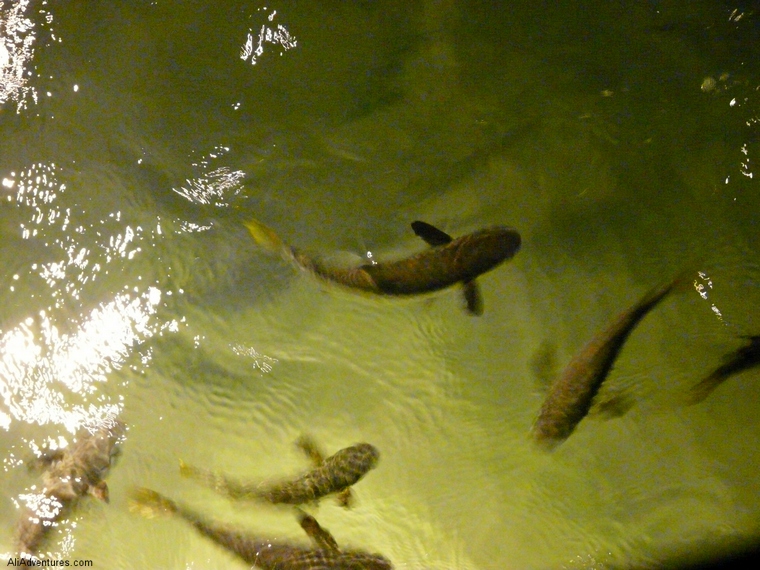 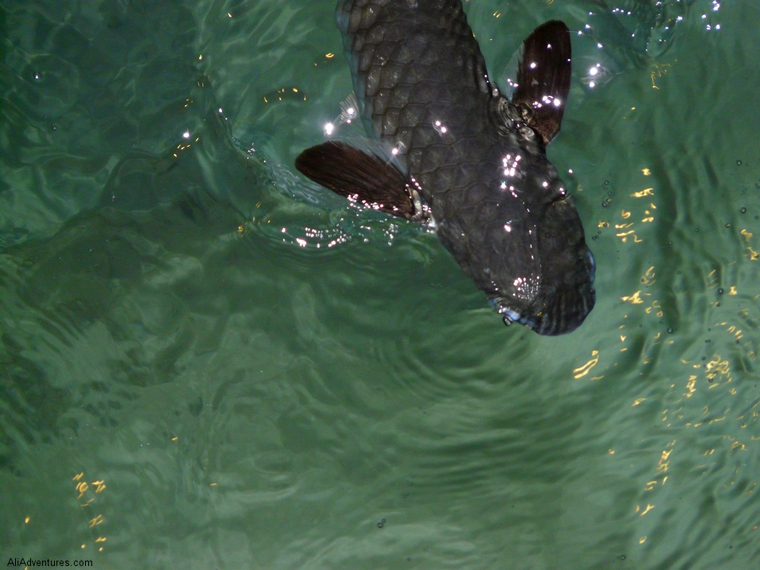 On our second night, we decided to go all out and pull the glass completely off. We sat on the floor for at least two hours giggling and throwing tiny pieces of bread to the fish. Oddly enough, our nighttime fish feedings turned out to be the highlight of our trip to Bora Bora. Of course there are plenty of other things to do in Bora Bora, but feeding the fish from our bungalow was really fun. 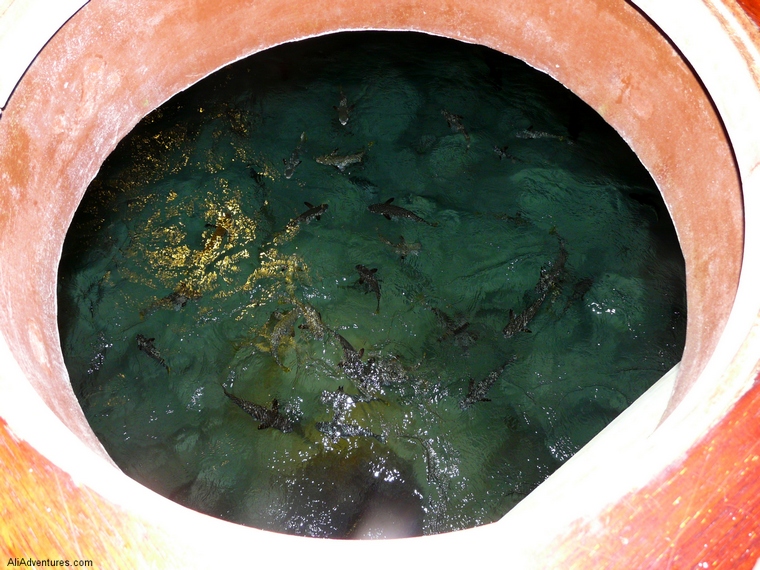 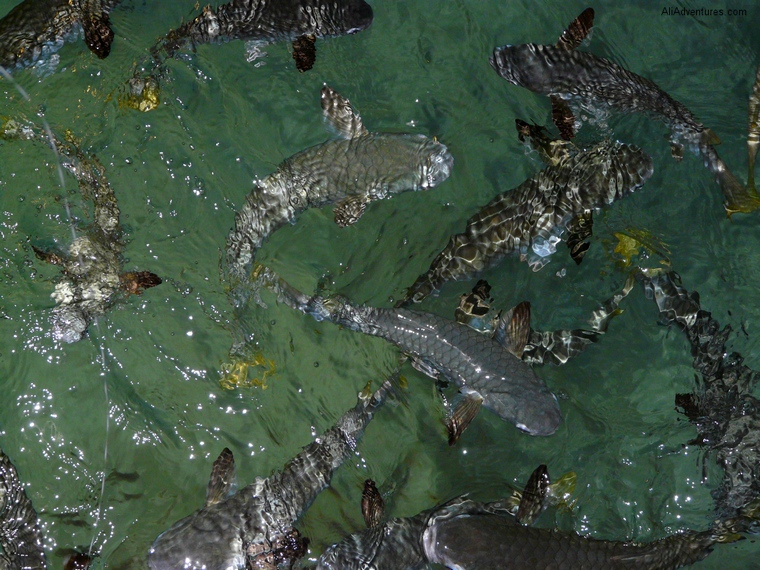 The Bora Bora sky got all the storm out of its system on our second and final night on the island. On the morning we had to check out, we woke up to gorgeous blue skies with only a few white puffy clouds. The water that looked pretty in the midst of the storm suddenly looked stunningly blue-green with the sun’s full light shining on it. We even got a spectacular rainbow while waiting to board our flight back to Tahiti. 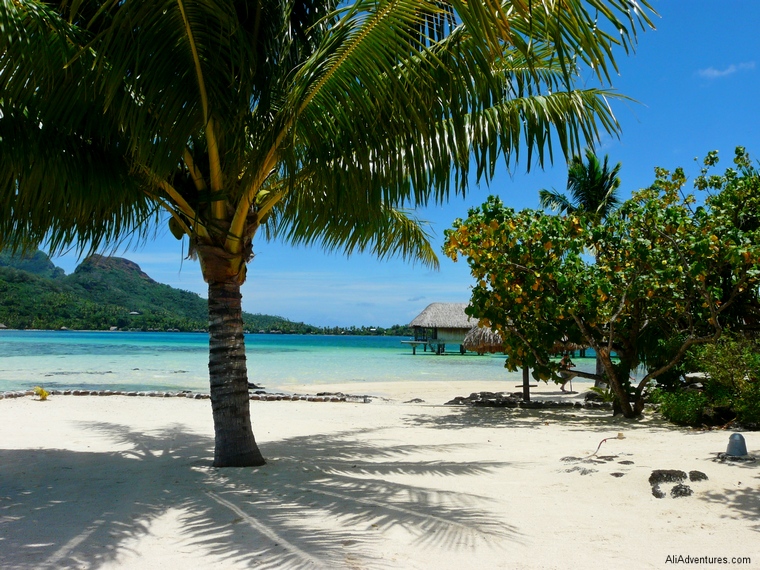 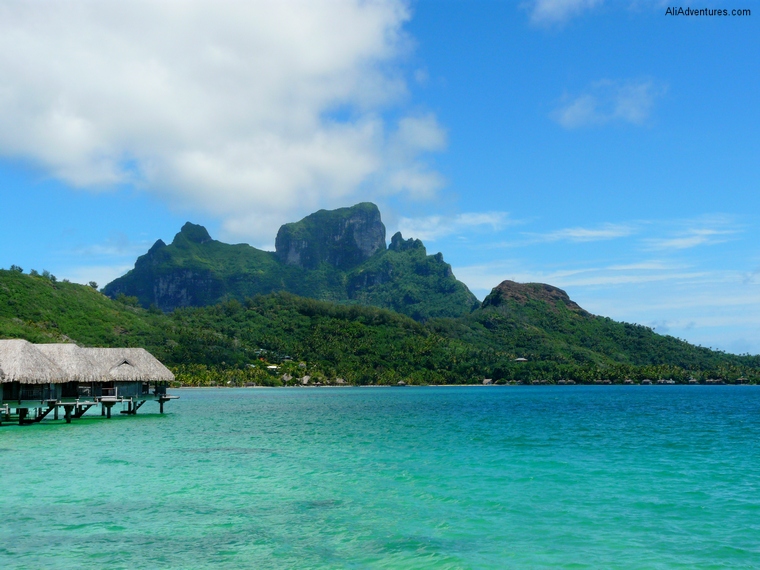 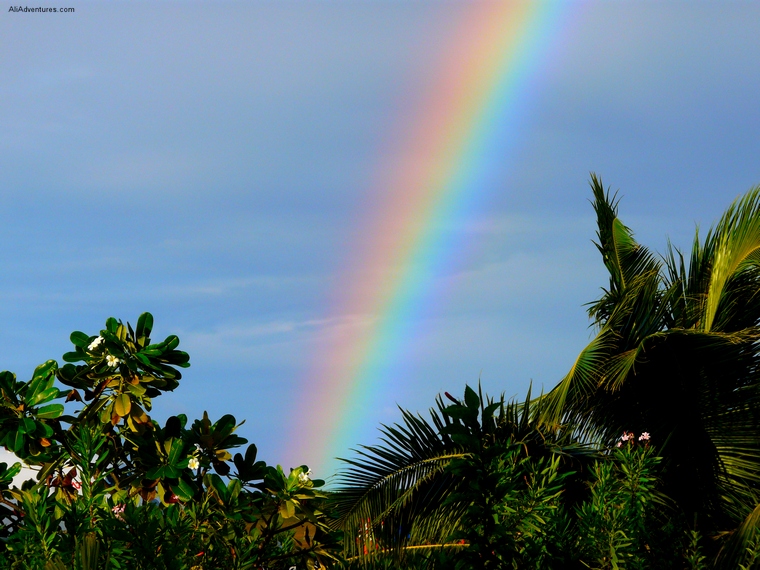 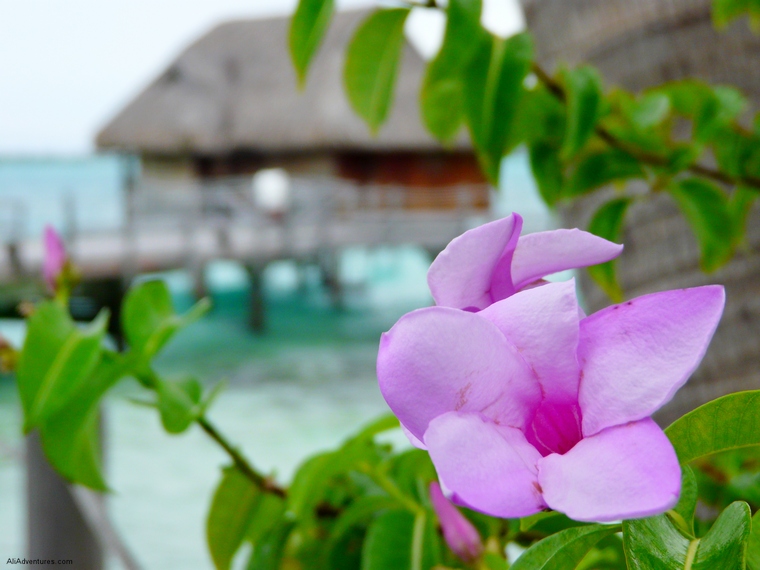