The Singapore Night Safari is basically a zoo that is only open at night. The animals there are nocturnal, and most of them are not in cages. When I was in Singapore last March, I didn’t have time to make it to the safari due to poor planning on my part. But it sounded really interesting, so when I ended up booking Singapore as my first stop on my round the world trip, I was determined to make it there. 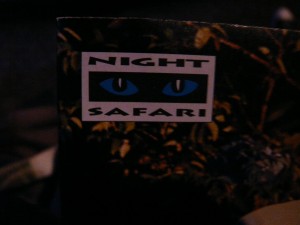 Amanda wasn’t due to arrive until after the night safari closed, so I went by myself. The guy at the front desk of my hostel gave me directions using public transportation, but I also stopped in at their sister property around the corner because they owed me a refund from a booking error. When I was in there, I mentioned I was on my way to the night safari and they told me about a shuttle service that sounded a lot easier than taking two metro lines and a bus. So I thought maybe some of you could use some tips to make your night safari experience a little easier.

The shuttle service is called Singapore Attractions Express or SAEx. There are several different pick up spots for the shuttle to get to the night safari, most of which seemed to be hotels or nearby hotels. Ask at your hotel or hostel front desk where the nearest pick up spot is. For me it was in Little India at Owen Road and Serangoon Road, which is a short walk from the intersection of Serangoon and Lavender Roads near lots of hostels. 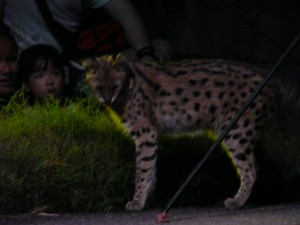 Your hostel might be able to sell you a ticket for the shuttle but if not you can buy it on board. Regardless it’s S$4.50 for the journey to the safari. Your hostel or hotel might be able to sell you a ticket for the safari for S$32 but it turns out I could’ve bought it on the shuttle for S$30.50. Small difference, but S$1.50 can buy you a huge bottle of water or half a cheap lunch. The shuttle took about a half hour from where I was picked up, but I was almost the last stop. The public transportation option would’ve taken me an hour and a half. The return shuttle leaves the safari every half hour starting at 9:30 until 11:00 and costs S$2.

The night safari is open from 7:30PM to midnight, and the restaurants and shops open at 6:00PM. The first shuttle pick up time is at 6:30PM, which is your best choice for maximizing your time at the safari. The first thing I did when I got there was make my way to the amphitheater where they had an animal show that was about a half hour long. It was somewhat geared towards kids but still neat to see the animals they brought out. The show was done in English, but the hostess told us in about seven different languages to turn off the flash on our cameras because it hurts the eyes of the nocturnal animals. 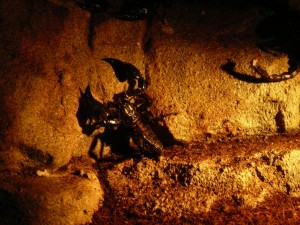 After the show, I walked back out towards the trams that take you on a tour of the safari. They give the tour in English, Chinese and Japanese, so make sure you get in the correct line. Throughout the tour, they stop at certain sections to point out animals, and they tell you about the animals you’re looking at. Unfortunately it was really hard to take pictures because of the no flash photography rule. After the tram, you can walk any number of trails in order to see the animals at your own pace, which I thought was really great. There are some in cages, but most of them are just behind a simple, low, wood beam fence making the experience a lot less like a typical zoo.

For me, the night safari was the highlight of Singapore. It’s a great city for food and it seems like it would be a very livable city. But the night safari is something so unique, it shouldn’t be missed. My favorite was the bat room where the fruit bats fly all around you and the trees. Have you been to the Singapore night safari? What was your favorite part?