Packing Carry-on Only for 5 Months Around the World

People often think I’m crazy for refusing to check luggage. It’s not even about the luggage fees for me, I just don’t like the hassle of checking bags. Airlines often lose luggage, it takes longer to check in for a flight, and you have to wait a lot longer at the end of the flight before you can finally leave the airport. Plus limiting myself to the amount allowed as carry-on means I shouldn’t have more than I can reasonably carry by myself. 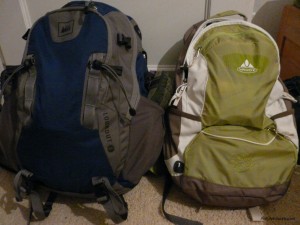 So when I started planning my five month round the world trip, I stuck firm with my practice of carry-on only. I purchased a 40L backpack from REI before I moved to Germany, and while in Germany I decided a smaller 20L backpack would make a better second bag than the messenger bag I originally planned on taking. Apparently I’m the girl who constantly buys luggage instead of purses.

Packing for five months on the road can be a little daunting. This isn’t like a two or three week vacation, this is my life for the next five months, and everything had to fit in those two backpacks. I knew I’d need enough clothing to not have to do laundry too often, but I also couldn’t pack a multitude of outfits. Most of my time will be spent in warm weather areas, but then I will be cooler New Zealand for a few weeks and back in the US during winter.

Then I had to consider all the other non-clothing items I needed to bring. I have ulcerative colitis so I have to take a lot of pills every day. I only packed enough to get me to the end of the year since Andy will be meeting me for Christmas and New Year’s in New Zealand, so he can bring me another two more months worth. I also needed toiletries, electronics, and a bunch of other random things. So here’s what I ended up with: 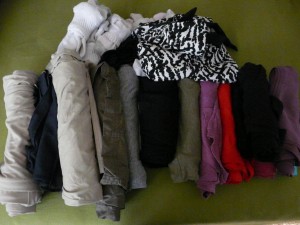 The clothing was actually not so hard. It’s impossible to pack enough clothes for five months (does anyone even own that much clothing?) so obviously I will have to do laundry no matter what. I packed 4 tank tops, plus a shirt to sleep in, 3 T-shirts, 1 camisole for layering, 1 long sleeve shirt, 3 pairs of shorts (1 are beachy/gym type shorts), 1 pair of gym pants, 1 pair of travel khaki pants (yes the kind that convert into shorts – I wanted them for the anti-mosquito stuff in them), a dozen pairs of underwear including 7 pairs of quick-dry Exofficio underwear, 7 pairs of socks, 1 pair of jeans, 1 bathing suite, 1 fleece pullover, 1 pair of sneakers, 1 pair of flip-flops, and 1 pair of Tevas sandals.

A lot of travelers think jeans are a bad idea because they take up so much room, and if you don’t have access to a dryer, they take a long time to air dry. But I will be spending enough time in colder climates (after Southeast Asia) that I felt they were worth bringing. I’m also keeping them secured on the outside of my bag instead of taking up precious room inside. I’ve also learned after many trips that one of the keys to traveling with such little clothing is the willingness to wear the same shirt or pair of shorts multiple times before washing it.

In the electronics category, I brought my laptop to make it easier to keep up with my blog and keep in touch with Andy through Skype. It weighs less than 4 pounds, so it’s pretty light. I also brought the webcam for Skype, my external hard drive, Kindle, iPod, camera, an old camera as a back up, plus whatever plug adapters, batteries, and charging cords I need. I do still have my iPhone, although I can only use it when I have WiFi, and I have an old school cell phone with a pre-paid sim card from Germany in case of emergencies. I bought a headlamp which has already come in handy a few times, and I also have a little pen light. 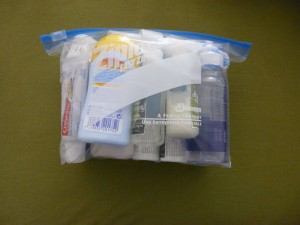 Another challenge of carry-on only is the liquids restriction. In my one allowed Ziplock bag I packed tiny bottles of shampoo and conditioner, lotion, 5 travel-sized bottles of contact solution, a tiny tube of wound cream (kind of like Neosporin), 3 travel-sized tubes of toothpaste, and a small bottle of sunscreen. Luckily prescription medicines that are liquids do not count towards the total amount allowed, so I was able to put my nasal spray in another bag. I also had to pack my colitis medication, which unfortunately came in a big box instead of a convenient bottle. I also packed iron pills and vitamins that I take daily, along with a small amount of ibuprofen, Immodium, and paracetamol.

Other random items include pens, a small journal-type notebook, a padlock, sanitizing hand wipes, a travel towel, a rain jacket that folds up into itself, a hat (thanks to my ex-coworker Vicki for the jacket and hat), a stash of business cards, deodorant, razor, as many packs of tissues as I could shove into my bag, a brush and hair ties, my glasses and 6 months worth of contacts, toothbrush, travel laundry detergent sheets (thanks to my friend Andrea), a small purse and a small bag that works well for beach days, passport, wallet, a bunch of memory cards for my camera, extra Ziplock bags, and a Lonely Planet Southeast Asia on a Shoestring guidebook.

As I write this, I’m just under two weeks into my trip. The bags aren’t terribly heavy, but I’m already wishing I could unload some stuff. Amanda has thrown out some old clothes she brought, but I need my few items to last awhile. I’m glad Andy will be able to bring me the rest of my medicine when he meets me in New Zealand because that definitely helps save space. I’ve also added a sarong and some more shampoo, sunscreen, and toothpaste. But so far I can’t quite part with anything in my bags. Hopefully that’s just a sign that I’ve done well with my minimalist carry-on only approach.

Did I leave anything out that you think I should’ve brought? Did I pack anything you think was unnecessary?