I visited Australia a few years ago but didn’t have time to make it to Melbourne. When I was planning my round the world trip, I decided I wanted to stop there in between Southeast Asia and New Zealand. Originally I thought maybe I’d spend a few days in and around Melbourne and a few days in Tasmania, but after the stress of traveling too quickly through Southeast Asia, I decided 10 days in Melbourne was a much better idea. During my time there, I encountered a variety of quirky things including landmarks and signs among others.

I stayed at a hostel in St. Kilda, which is a suburb of Melbourne, because Australia is much more expensive than Southeast Asia and this was a slightly cheaper option. Right down the street was Luna Park, an amusement park with a giant face at the front. The mouth is the gate. This is the place to go for all your roller coaster needs. 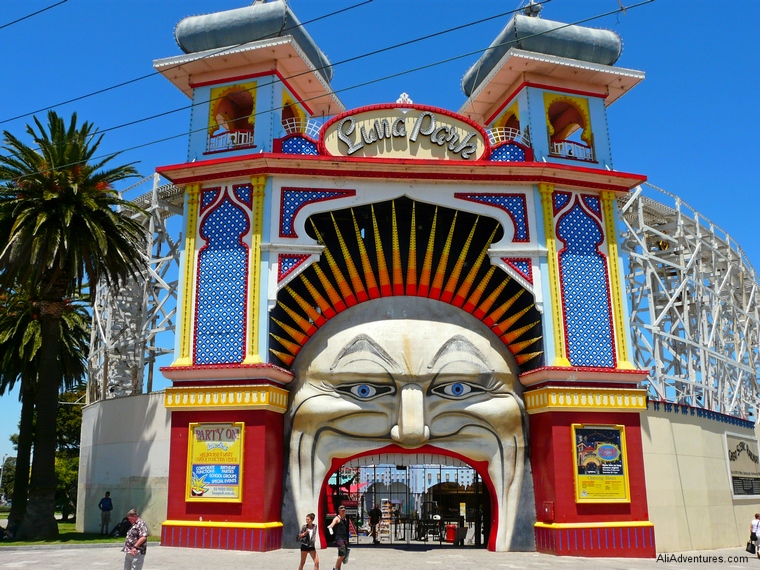 In a few places in St. Kilda and the surrounding neighborhoods, I began to notice these bright yellow signs that that said “smiles per hour zone” with a number on it. Confused, I took a picture so I could look up the website on it later. Basically, a community survey was taken in 2005 to determine how friendly people viewed their neighborhood. Then smile spies were sent out to track how often people smiled, made eye contact, said hello, or any sort of positive gesture made to another person on the street. 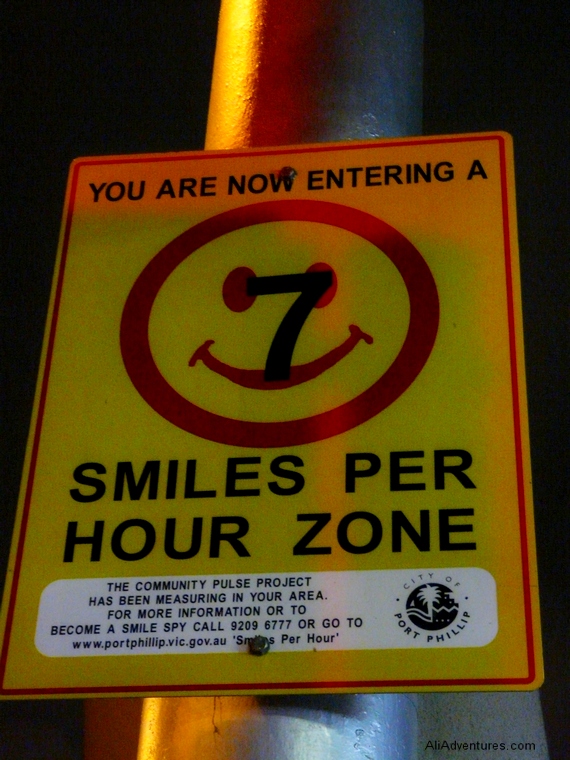 While walking around Melbourne with Genevieve, who I met in my hostel, we came across several quirky landmarks. The Fitzroy Gardens are listed in my guidebook, and it was a really pretty place to stroll through. However, the guidebook did not mention the miniature Tudor village or the Fairies Tree.

Genevieve and I went into a mall to see a Christmas light show that she had seen the day before. In between shows, she took me to see an edible display that took Christmas gingerbread houses to a whole other level. Aside from the house, there were reindeer, kangaroos, frogs, birds, trees, flowers, and Santa with a car instead of a sleigh. And it was all edible!

While walking along the Yarra River, Genevieve and I decided to check out a pub located underneath a bridge and have some cider. It wasn’t anything spectacular and it was small, but it sure was a creative location and the views were great! It’s called Ponyfish Island and it’s located under the Yarra River pedestrian bridge.

Melbourne seemed to have quirky things around every corner. It added to the fun vibe of the city, and I enjoyed seeing these things that, for the most part, were not in a guidebook.