Our Chaotic Introduction to Krabi, Thailand

Maybe something was wrong with her, or maybe we had the wrong place, but the old woman who finally opened the door at the guesthouse, oddly locked at 6pm, seemed utterly confused as to why we were standing there. “We have a reservation,” I said to the woman. She stared at me blankly. “Reservation? We booked online?” She hesitated, clearly not comprehending anything.

Eventually she seemed to remember she was working at a guesthouse and appeared to want to show us a room, but she didn’t understand we were already booked. Andy somehow managed to get the wifi password and  showed her our confirmation email, but she still seemed confused. We started wondering if we should just abandon ship and find someplace else to stay. We’ve never encountered someone running a guesthouse who didn’t at least speak a dozen words of English, especially the ones pertaining to their job. It was an ominous start to our time in Krabi. But finally after about 15 minutes she handed us a registration sheet and a room key. 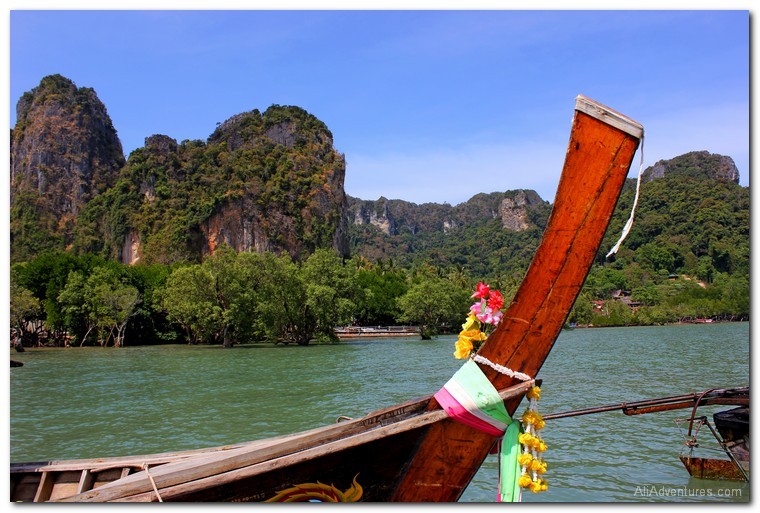 It was a long day and two flights getting to Krabi from Siem Reap, so we didn’t waste too much time before looking at a map and setting off to find dinner. But after walking for a few minutes, something didn’t feel right. The brightly lit street lined with shops suddenly looked dark and empty up ahead. It didn’t seem like we were walking towards the center of town, and I just didn’t have a good feeling about it. I was starving and started to panic. There were a few people sitting outside chatting, so we turned back to ask for help.

Unfortunately their English wasn’t so great either. Andy got paper and started drawing a river, fish, and a big crab statue we saw on the way in. The crab picture finally clicked with the two guys. Before we knew it, one man was walking toward his car and waving us along. This kind stranger was giving us a ride. We later realized Google had our guesthouse on the wrong side of the road, so we were walking in the complete opposite way from where we should’ve been going.

By this time we were starving and snippy. There seemed to be fewer restaurants than we remembered seeing on our way in. One looked ok but loud music blaring from a parked car nearby made it unappealing. I was starting to lose patience with wandering, the stress of the evening still with me. Eventually we saw something across the street that looked interesting, so we dodged a few cars and half a dozen motorbikes to check it out. It wasn’t fantastic, but it was good enough and it quieted our hunger.

When we asked the friendly Frenchman running the place how to get a taxi or tuk tuk back to our guesthouse, he explained that they were near impossible to find while the night market was going on. “We have no idea how to get back,” we told him, along with the name and address of our guesthouse. Luckily he knew the area and almost offered to give us a ride himself, but he only had a motorcycle so he’d only be able to take one at a time. “Hold on,” he said and went outside. A few minutes later he came back, pointing towards two guys on motorcycles.

He had called for two moto taxis and explained where we needed to go, in Thai because they spoke no English. “It’ll be 30 baht each,” he said as we thanked him profusely for his help. Without much thought or hesitation (we’re not motorcycle people, but how else would we get back?) Andy and I each hopped onto the back of a motorcycle and held on for the ride. Ten minutes later Andy’s motorcycle pulled over and mine followed. We made it back to our guesthouse. 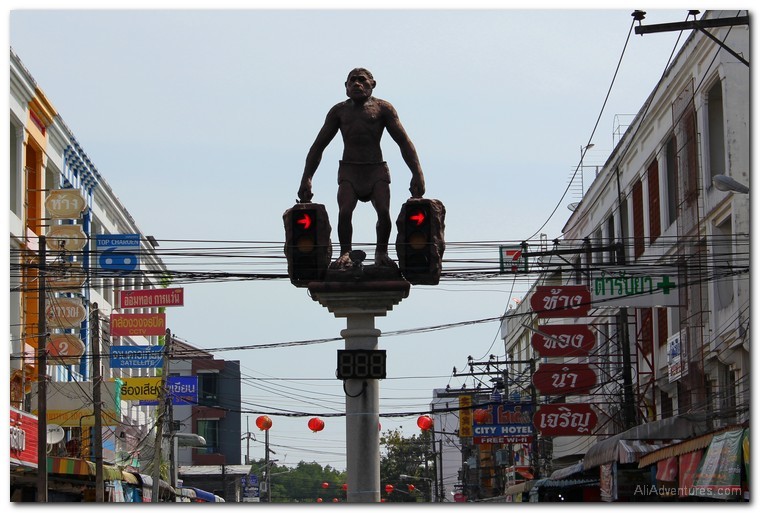 It was a night that started with a massive language barrier and a lot of frustration. At several times I thought I might cry in the middle of the half-crumbling sidewalk. But as the evening wound down, the wind was blowing through my hair and I was smiling at the craziness of our first night in Krabi, and in Thailand. Sometimes you just gotta go with the flow.

The next day when we saw the old woman from our guesthouse, she suddenly understood a lot more of what we said. She was also able to speak enough broken but relatively clear English for us to have a basic conversation.

I think maybe she was high when we met her the previous night.

Sign Up
How Much We Spent Traveling in Cambodia Railay, Thailand in Photos