The Best (and Worst) Mexican Food in Berlin

I still haven’t found anything to rival my beloved Nuevo Laredo Cantina in Atlanta, but the places I tried in Berlin are so far ahead of the pathetic offerings in Freiburg, I’m not sure how I’ll deal with returning home. (Update: This is how.) In order from my least favorite to most favorite, here are the Mexican restaurants I tried during our three months in Berlin. At each one I ordered a chicken quesadilla because it’s my favorite dish, and I thought it would be good to judge them all based on the same meal.

This is the only one on the list I wouldn’t return to. Despite all the signs outside listing the many Mexican dishes they had, when we got our menus, we had to flip through at least three pages of burgers, pasta, and German dishes before we even saw the Mexican food.

My chicken quesadilla was decent but nothing exciting. I couldn’t find chips on the menu (except in the form of nachos) and I was charged 1.70€ for a little cup of salsa. The high prices were not worth the mediocre food, and I prefer a Mexican restaurant to focus on the Mexican food.

Update: This place has moved locations and luckily they no longer have any Mexican food on their menu. 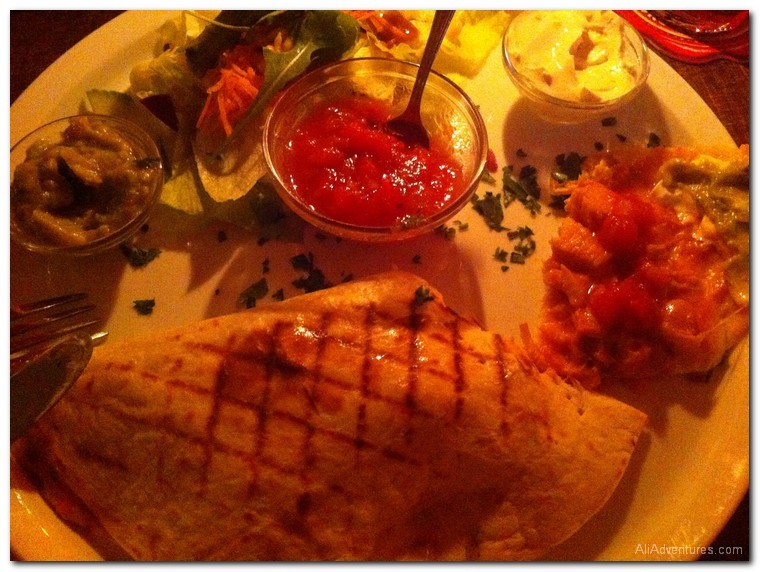 The atmosphere in this one made it seem as though it might be a chain restaurant, but it isn’t. (Update: Yes, it’s totally a chain.) I’ve been told their drinks aren’t so great, but we didn’t order any alcohol, so I can’t vouch for that.

My quesadilla was pretty tasty, the chips were good, and the salsa had at least a little kick to it. The chips came with salsa, guacamole, and something else that tasted like fancy sour cream, like there was some other ingredient in it. Overall, I liked this place.

Update: Not sure what we were thinking. This is not a good restaurant. The food is rather mediocre, possibly my opinion was skewed by having eaten at Treinta y Seis so recently. On a return visit, I asked for more salsa, and they accidentally brought me sweet and sour sauce. Why did they even have sweet and sour sauce at a Mexican restaurant? Seriously, just skip this place. 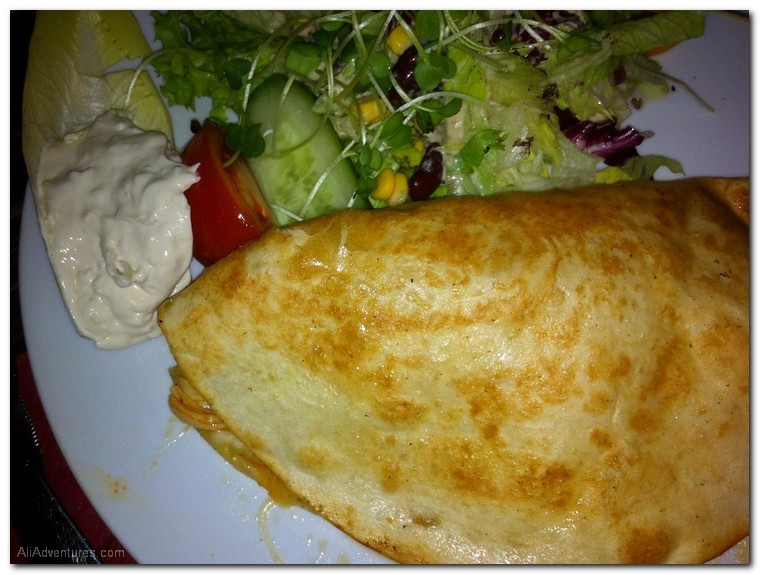 Our friend Adam took us here just a few days after we arrived in Berlin. I liked the hole in the wall atmosphere, though there weren’t a lot of seats.

My quesadilla was good but it didn’t blow me away. It also came with a side of beans, which I thought was a little odd. Maybe it’s just personal preference, but chips and salsa would’ve been a nicer touch. I’d go back here if I was with someone else who really wanted to go. 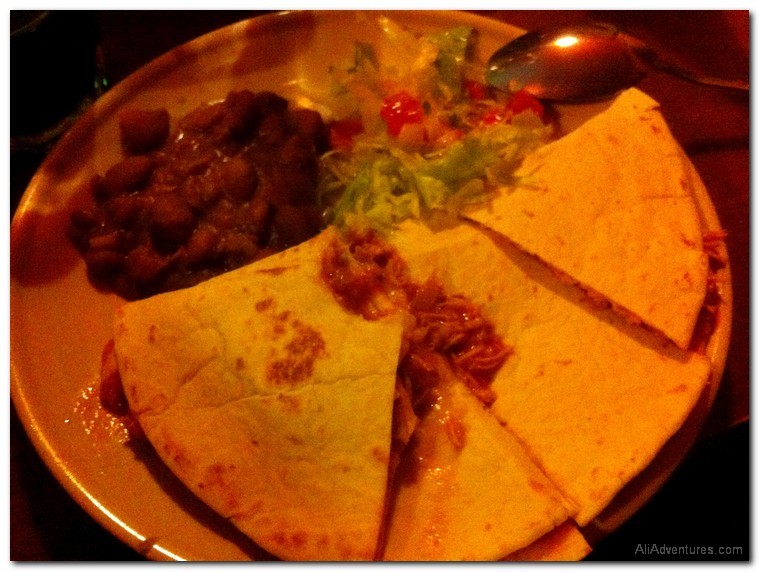 This one felt a little like a fast food place, but not quite, and it was supposedly California style Mexican. Choose the meal you want (tacos, quesadilla, burrito, burrito in a bowl, etc.) and then the type of meat (or tofu for vegetarians) plus toppings and extras, like guacamole, onions, chips. Sort of like “pick from column A, B and C” type of situation.

Of the two different kinds of chicken, the chipotle is supposed to be the spicy one, but in my opinion it just has more flavor than the other one. The homemade tortilla chips were delicious, my favorite of any I’ve had in Berlin, though the small bowl we ordered was rather tiny. I thought the guacamole was really yummy, and the salsa was tasty but not as hot as I had hoped. We’ve been here a few times, and it grows on me more and more each time. 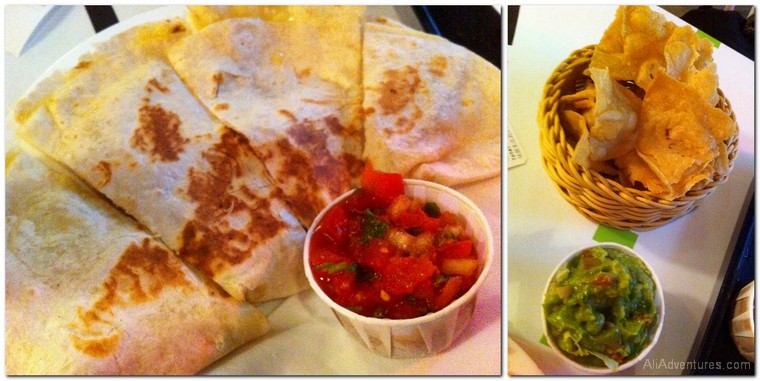 I stumbled across the twitter account for this restaurant a month or so before we even knew for sure we would be in Berlin, so it was nice to finally be able to eat there. It’s a small place, and it looks like they might do a little more take-out business then eat-in, but they do have bar counters and enough stools to seat about 15-20 people. Because of the small set-up, we could watch our food being cooked by the one chef there.

I loved my quesadilla and its crispy (but not too crispy) tortilla and the little piles of onions and pico de gallo that came with it. They had a tray of tiny cups of salsa, but it wasn’t quite my taste. Their quesadilla slightly beats the one at Dolores, but unfortunately I didn’t try their chips. I didn’t like sitting on a bar stool, but other than that I would definitely go back to Maria Bonita. 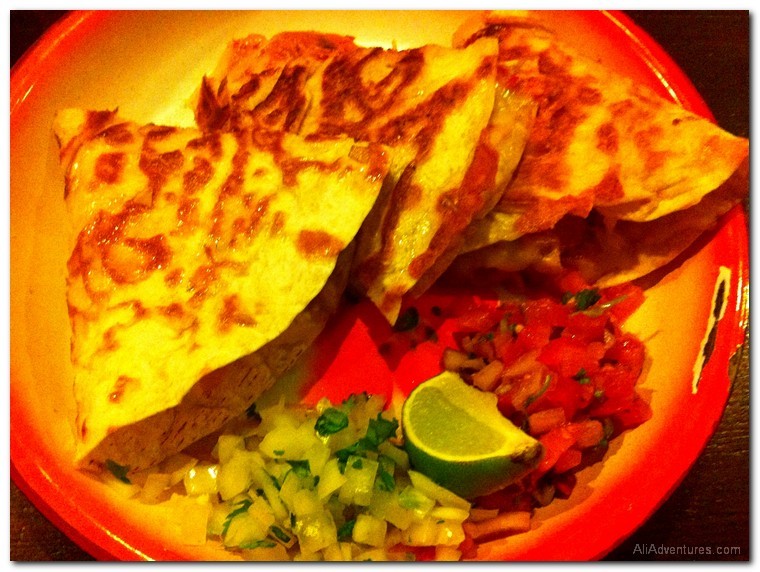 I had heard from other people that this was the best. Before we went, I wondered if it would live up to the hype. But luckily Santa Maria didn’t let us down. With only about 10 tables in the restaurant, the place is almost always packed with several people waiting for a table.

But the food…the food was delicious. My quesadilla was perfect, and I loved the extra onions they put on top. (I promise, my picture doesn’t do it justice.) Two kinds of salsa were brought to our table, and if you ask they will also bring you some habanero salsa which starts out sweet and quickly hits you with a strong spicy heat. On Tuesdays they have select tacos for 1€ starting at 4pm. It’s really no wonder the place is always crowded.

If you only have time for one Mexican restaurant in Berlin, make it Santa Maria.

Update: Still my favorite Mexican place in Berlin. (We live there now.) But now we go to Santa Maria Eastside, their other location in Friedrichshain, because it’s closer to where we live. 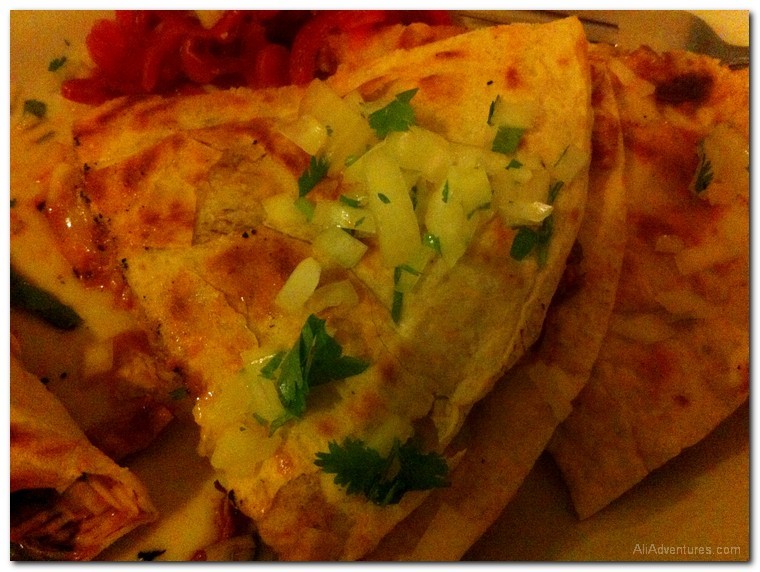 Mexican food in Berlin was a pleasant surprise. It might be that in a big city like Berlin, there are just so many people from other countries, that the international food has to be closer to the real deal. Even if Mexican food as I know it is really Tex-Mex and not the same as the food from Mexico.

I still miss the automatic and unlimited chips and salsa that 99.9% of restaurants in the US provide, but that’s really my only complaint about what I’ve found here. I will miss this variety of good Mexican food when we have to leave Berlin on January 1st, but I’m glad to know it’s here.

Update: We live in Berlin now, and we keep finding more places. So far none have beaten out Maria Eastside, but it’s nice to know I have lots of options! 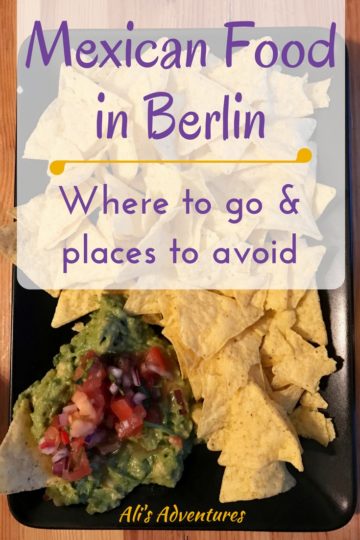 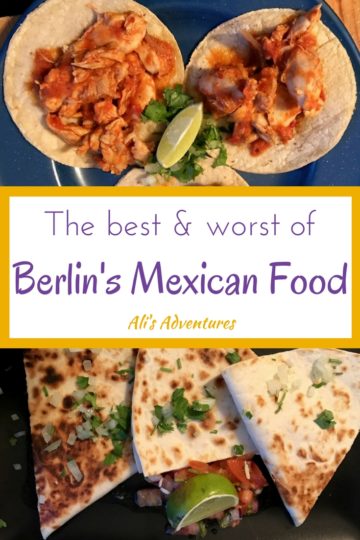 Sign Up
Views of Hamburg From St. Michael’s Cathedral Scenes From Hamburg