Larnaca: My Interesting Introduction to Cyprus

As I stood examining the bus schedule, a woman came over to see if I needed help. After telling me the correct bus, conversation quickly turned to small talk, and then somehow she was ranting about Muslims and foreigners in general. She went on like this for the next 15 minutes until the bus arrived and continued until we both exited the bus at the same stop. No matter what I said, in an effort to change the subject, she always brought it back to how terrible the Muslims are and how all the immigrants are taking her pension in the UK.

I had just landed in Larnaca, Cyprus for a week of warm and sunny weather. It was late March and still cold and dreary in Berlin, I was weepy from the lack of vitamin D, and I needed an escape, so I planned a solo trip to thaw out a little.

I arrived the day after an Egyptian man hijacked a plane with a fake bomb and ordered the pilots to land in Cyprus because he wanted to see his ex-wife. This was the opening the woman at the bus stop needed to start her racist rant, and no matter how many times I reminded her that it’s not possible for every single Muslim to be a crazy terrorist, she would not relent. She also told me how the Greek Cypriots in the south have been caring for all the mosques and homes that once belonged to the Turkish Cypriots who lived there in the past, but she assured me the Turkish Cypriots in the north were not reciprocating. 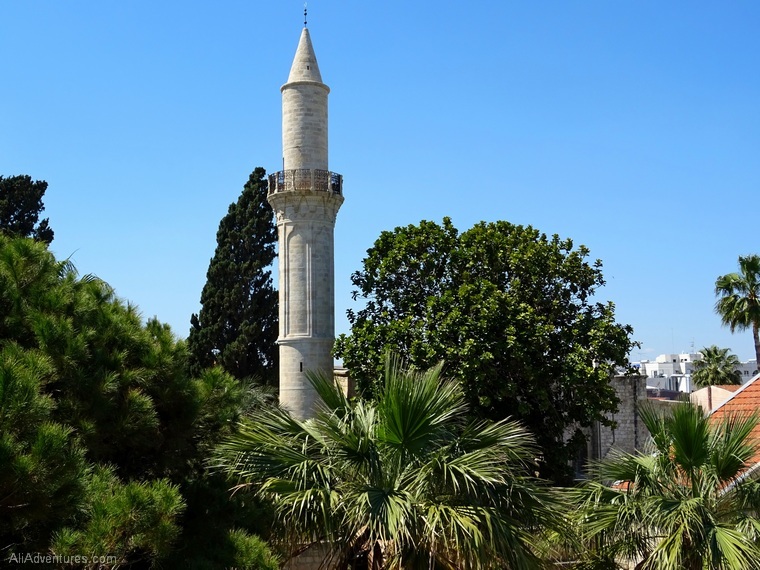 The country has been divided for decades with the Greek Cypriots in the south and the Turkish Cypriots in the north. Turkey is the only country that recognizes Northern Cyprus as a separate country, but there are border checks when crossing from north to south and vice versa, so things get complicated quickly. I’ll write more about that when I get to my post about visiting the north, but suffice to say my introduction to the country from this British/Greek Cypriot woman was quite interesting, to put it politely.

Once I finally pried myself away from her, I found my hotel and settled in for a couple of days. Larnaca is a small beach town with a fair share of tourists, but not tons to do besides enjoy the sand and surf. And the weather, while warm, wasn’t quite beach weather, at least not for me. But it was sunny and I could walk around outside in a short-sleeved shirt, and that’s all I needed. 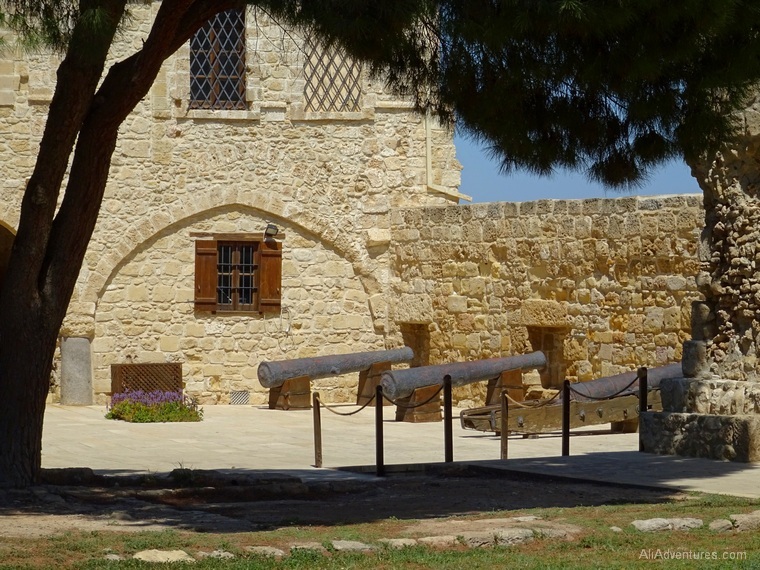 I spent the next day exploring the town. There was a small castle at one end of the beach that had nice views of the town and the sea from up top, but beyond that it wasn’t super impressive. I went to see the Church of Saint Lazarus, which was gorgeous and in a pretty square. From there I simply wandered for a few hours.

Maybe I just didn’t wander in the right direction, but some parts were really run down (the area around the mosque, despite what the woman told me about how well kept the mosque and other Turkish buildings were) and other sections were rows of shops found in any European city. I read about some ruins on the outskirts of town, but it was a 30 minute walk and hours were pretty limited so I skipped it.

I was struggling to get back into solo travel, but I knew I was better off exploring the town than sulking in my hotel room.

The main road along the beach was lined with restaurants, but many of them were places like McDonald’s, TGIFriday’s, Pizza Hut, and Starbucks. (Ok, so I totally ate at TGIFriday’s my first meal there. I was tired and feeling lazy and it was 20 steps from my hotel.) I did find some passable Greek food, and I wandered farther away to find dinner the second night. And luckily I found a smoothie place to go for breakfast. 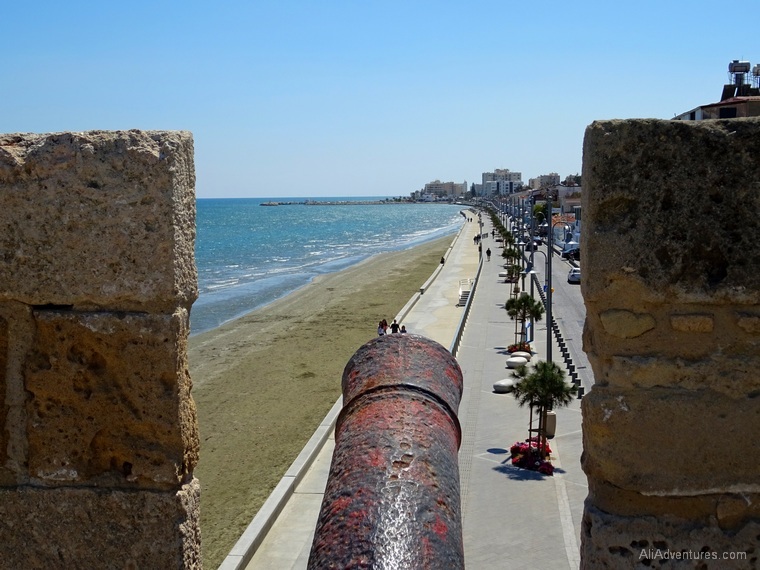 After two nights, I awoke to music and festive noises early in the morning. It was Cyprus National Holiday and people were celebrating. While walking to get my smoothie, I saw the bus leaving for Nicosia, the capital. It was the bus I needed but I was planning on catching a later one to get to Nicosia, walk across the border, and find a bus to Kyrenia on the northern coast.

Unfortunately after waiting for the bus for quite a few minutes beyond the time it was supposed to leave, it appeared it would not be arriving as scheduled. Apparently the main road was closed at midday for a parade and the bus was picking up somewhere else instead. But us tourists had no way of knowing this. A man who runs a car service conveniently came over to tell me and a couple who were also waiting for the bus. So at least we were able to get a ride, even if it was more expensive than the bus.

Larnaca was not the most exciting introduction to Cyprus, but it might be a good place to stay if you want a smaller beach area. As always, the people I met were more interesting than anything else, even if one was the racist woman I met at the airport bus stop. At least my trip to Cyprus improved from there. 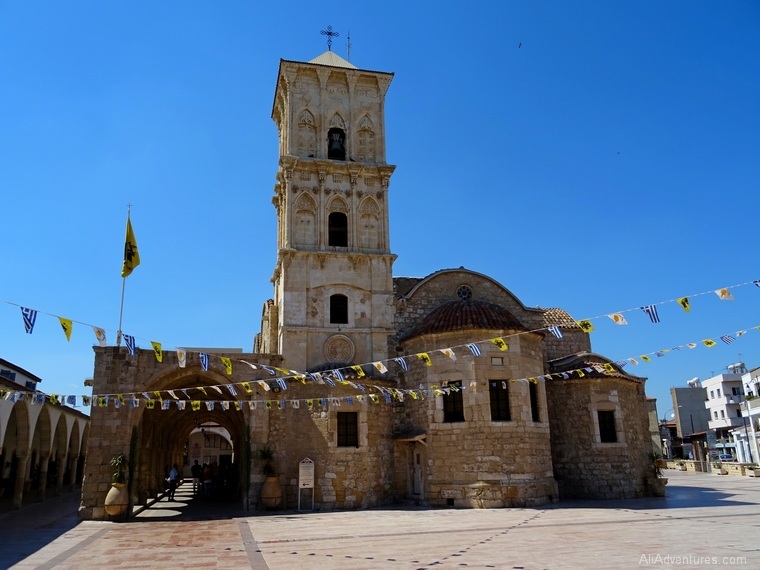 Despite my issue with the bus the day I was trying to leave Larnaca, the bus system was actually really good. This site has info on routes throughout the country as well as local city buses.

It’s a small city with most of the areas of interest close to the coast. I stayed at this hotel, which was apartment style and really comfortable. It was also really close to the beach and lots of restaurants and shops. It also only cost me 85.50€ for two nights, maybe because it was still the off season.

The entrance fee for the Larnaca Fort was 2.50€. The bus from the airport was 1.50€, and you can buy tickets from the driver.