How Much We Spent Traveling in Prague

It was a short trip to Prague, a long weekend away to celebrate our anniversary. Andy has been to Prague several times, and I was there once before when we first met. We had both seen most of the major sights, so this was a trip about food, enjoying the city, and having a relaxing weekend together. Here’s a look at how much we spent traveling in Prague. 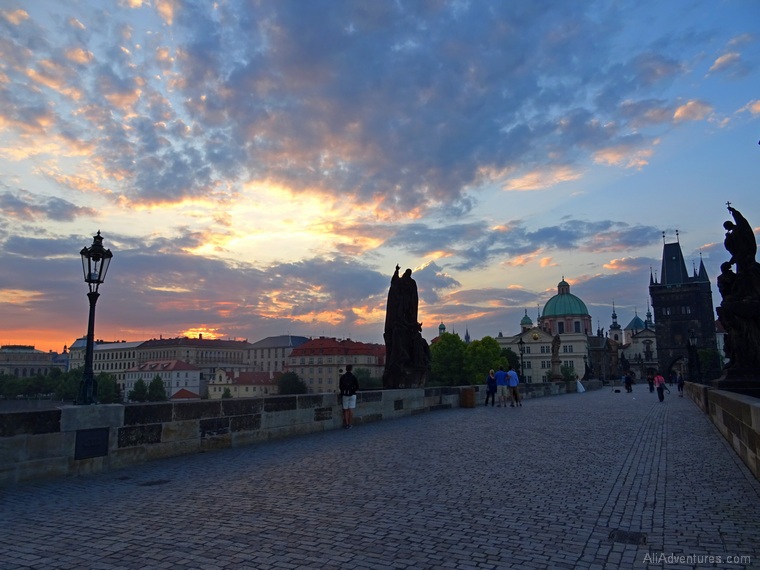 The totals are listed in US dollars, euros, and Czech korunas.

We spent four nights in Prague, and in an effort to be more comfortable than we have been on past trips, we booked a nicer hotel in the center of the city. Unfortunately we ended up with bedbugs, which we didn’t realize until we got home and the bites started appearing and tortured me for a week.

Even aside from that, we realized staying so close to the main square meant late night street noise from drunk tourists wandering back to their hotels. I might try staying on the castle side of the river next time. Our hotel was about $151.44 per night, or $75.52 per person per night.

>>Search for hotels in Prague here.

This includes our round trip train tickets from Berlin, which were 135€ ($150.38) for the two of us. We also bought 24 hour transport passes on two different days in Prague which were 110CZK ($4.52) per person. The 24 hour passes are definitely worth it if you’re going to be traveling from one part of town to another throughout the day.

As I mentioned, we focused a lot on food during this trip, but as you can see, it’s not an expensive city when it comes to eating. We had three dinners, three lunches, a few drinks, many snacks, and a few little things like bananas and yogurt for breakfast. We also went to a specialty beer place to buy some beers (and ciders for me) to take home with us. This category does not include the food tour or the beer tour we took. For four days, this averages out to about $54.02 per day, or $27.01 per person per day on food and alcohol.

During our time in Prague, we took the Eating Prague food tour and an amazing craft beer tour. We each received a free food tour, but we really love the company and have been on several of their tours before, and we have paid for them before. I also received a free beer tour, and we paid 63€ ($70.18) for Andy’s beer tour. This is also something I would’ve paid for had I not been able to get it for free.

We checked out many other top Prague attractions, such as seeing the amazing views of Prague from above by climbing the Powder Tower for 90CZK ($3.70) per person and by climbing the Petrin Tower for 100CZK ($4.11) per person. Normally the Petrin Tower is 120CZK ($4.93) per person, but we met a group who had already purchased a group ticket and two of their members decided not to go, so we lucked out and saved a few pennies.

Overall our trip to Prague was not an expensive one. The hotel was a little more than we’d normally spend, especially considering the outcome, and it accounted for more than half of our spending. Food was cheap and tasty. Most activities are inexpensive, and food tours, while a little pricey, feed you for one meal while also providing you with interesting information and fun guides. For four days in Prague, we averaged about $269.04 per day, or $134.52 per person per day.

Sign Up
Scenes From Prague Larnaca: My Interesting Introduction to Cyprus