Izmir was never on our itinerary. Even though we left the majority of our time in Turkey open to flexibility, we had a pretty good idea of where we wanted to go, so adding another destination wasn’t something we even considered. But when our journey across the western half of Turkey took us to Izmir, we couldn’t pass up the opportunity to explore for the day. We found out that the ruins of a castle were located at the top of a hill in Izmir, and since we both love castles, this became our top priority.

Getting to the castle 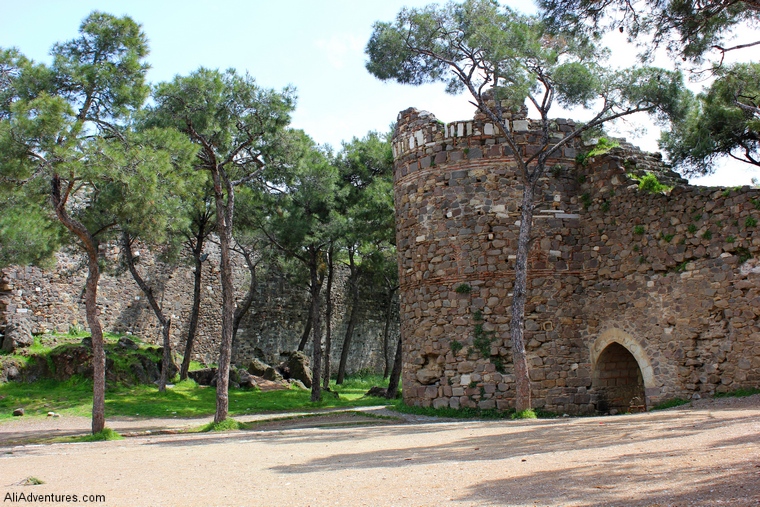 After finding out the train schedule to get to Selcuk, we grabbed a taxi outside the train station to take us to the castle. He didn’t speak English, so we tried pointing to the castle on our map. But since the map was in English and the castle was actually located off of the map, he still didn’t understand where we wanted to go. Thinking quickly, Andy took a pen from my bag and started drawing a castle. This got a good chuckle out of the driver as he nodded that he understood, and away we went. 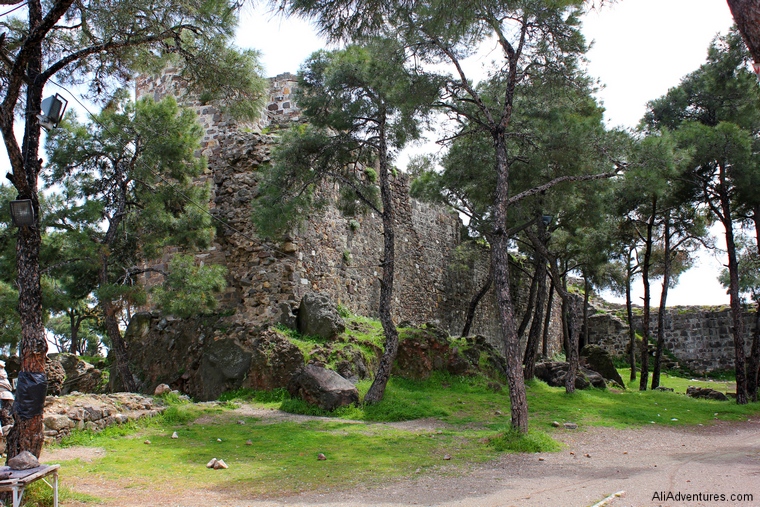 The castle and the views

A few small groups of locals were hanging out at the castle, having a picnic or drinking in a corner, but almost no other tourists. Maybe April was just a little too early for tourists, but we certainly enjoyed having the place almost entirely to ourselves.

A staircase led up to the top of the walls, which gave us an incredible view of the city and sea. Despite signs that said not to walk on the walls, lots of people were. We were content to stay at the top the staircase on of one of the pillars of the castle. 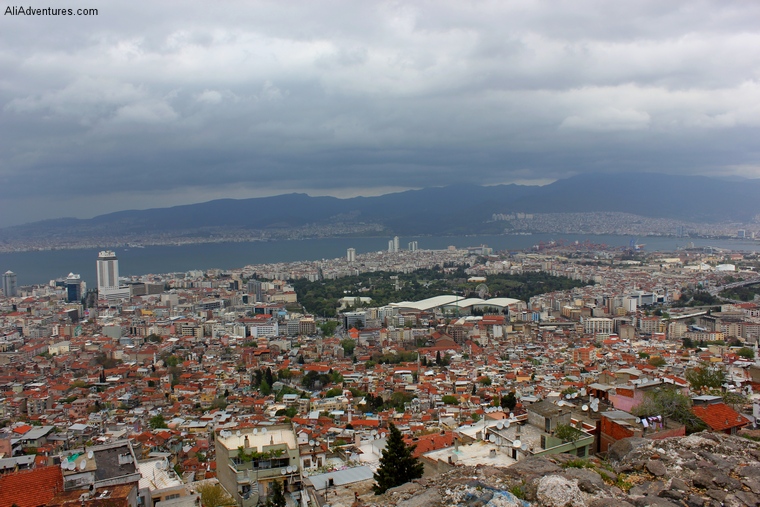 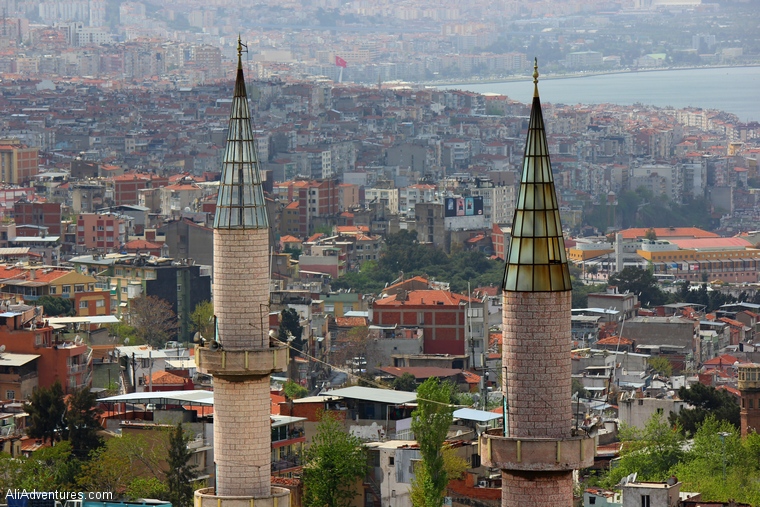 Eventually we climbed back down to ground level and explored the rest of the area. I really loved that there were still enough exterior walls intact to make it feel like a castle, even if the inside sections had been invade by grass and trees. 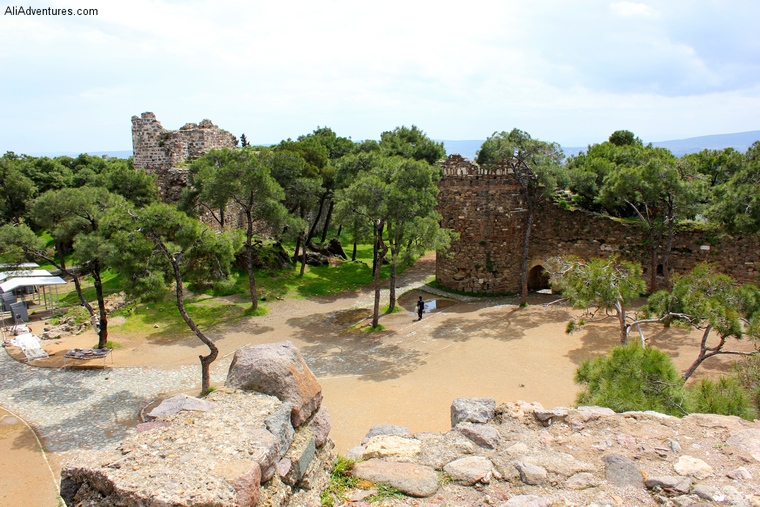 After the castle, we walked back down into the city to check out some ruins we could see from up top. The people of ancient Izmir obviously cared deeply about convenient parking. 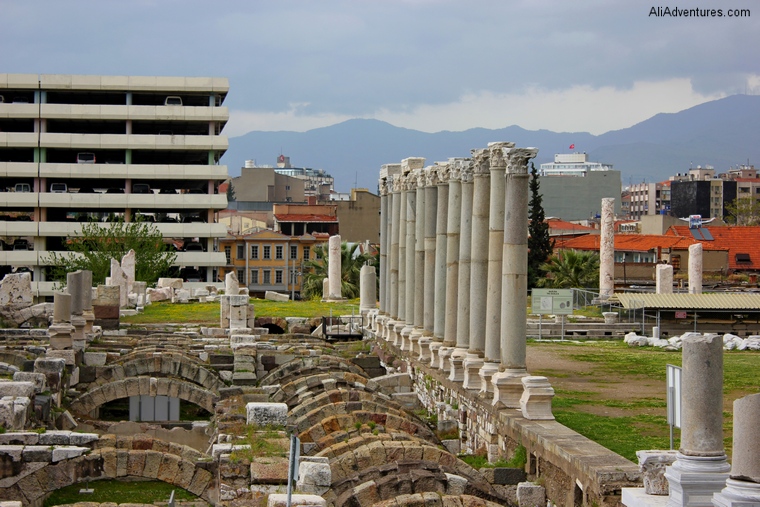 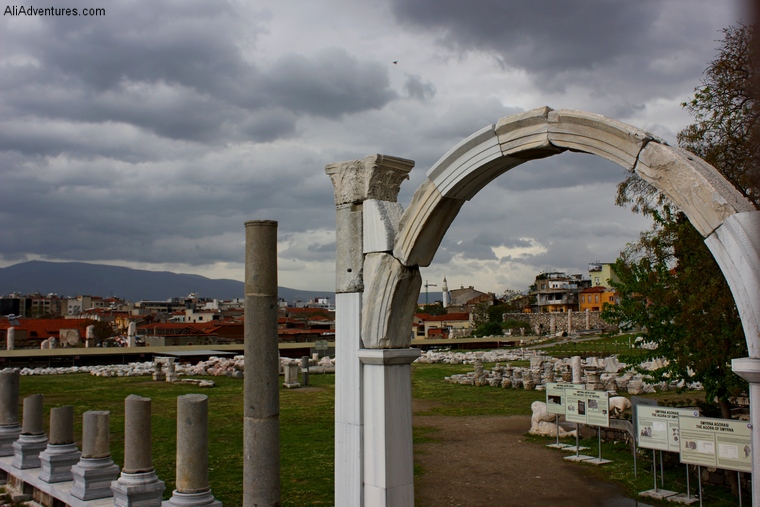 Unfortunately it started pouring shortly after we got to the ruins, so our visit didn’t last long. It was the kind of rain where even an umbrella doesn’t help much. We headed back to our hotel where we storing our luggage and waited out the storm for awhile until it was time to catch our train to Selcuk.

If we had more time, I would’ve like to explore Izmir for a few more days. It seemed like an interesting city with many modern elements mixed with a lot of history. As I’m learning to get used to, there’s rarely enough time to see everything we’d like to see.

I was recently interviewed on The Working Traveller, check it out here: Why I Live in Freiburg

Sign Up
Making Our Own Belgian Chocolate in Brussels Every Man, Woman and Dog Must Pee (Or the Brussels Peeing Statues)