Portugal is a country I just have to get back to someday. When I was in Spain for a study abroad program in college, our group took a weekend trip to Portugal, but I honestly can’t even remember where we went. (This was 17 years ago…) A few years ago Andy and I fell in love with Lisbon after being there for just one night. And then we went to Porto and saw some of northern Portugal as part of a blogging conference whirlwind tour. So I need to visit Portugal again properly! 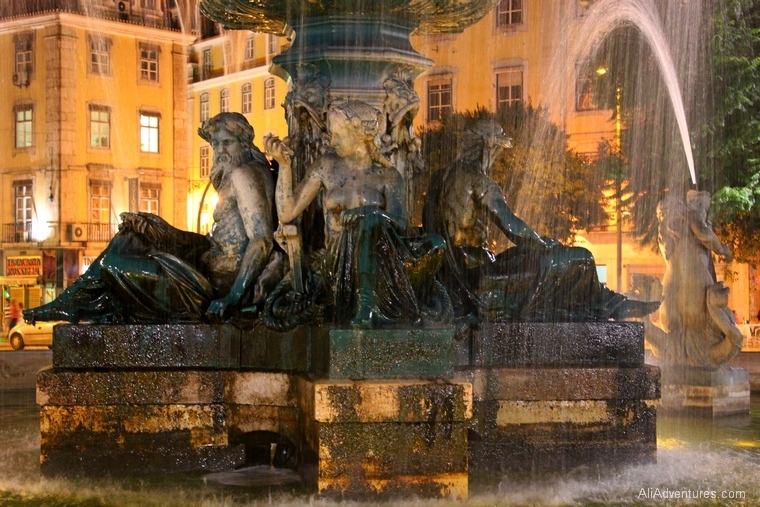 Luckily I don’t have to go far for Portuguese food in Berlin. There’s a Portuguese restaurant in our neighborhood called Lisboa Bar, and Andy and I gave it a try for another round of the Berlin International Restaurant Project.

When we walked in and told a server that we had a reservation, we were led to a small table for two. It looked like the table had been shoved in as an afterthought because it was so close to three other tables. In hindsight I think they had to rearrange some tables for a large group, and it left an awkward single table for us.

But beyond that, we quite enjoyed the atmosphere and the wine crates and corks as decorations, and the food was tasty. The menu listed a bunch of small dishes and a tapas section. Trying multiple dishes is my favorite way to test out a new restaurant with this project, so we chose a few small-ish things to share.

Chicken in beer sauce
The chicken beer sauce was mostly Andy’s dish, though I did try a few bites. It was tasty and juicy, and definitely something we’d order again. 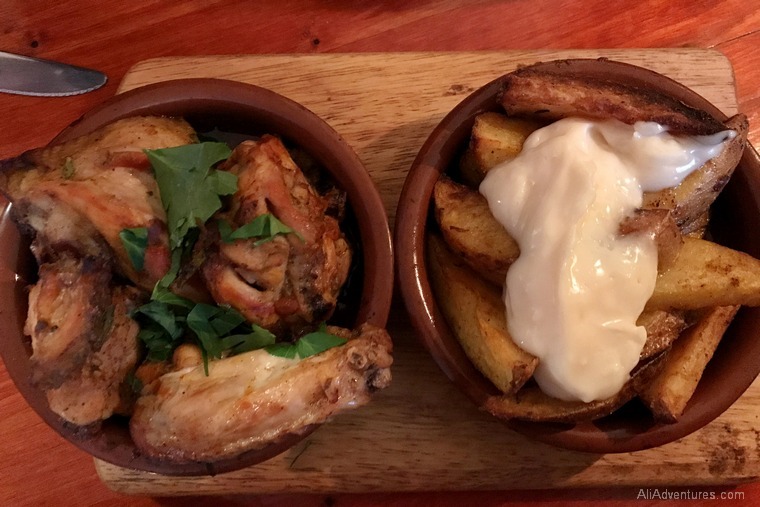 Potatoes with garlic aioli
These potatoes were cooked nicely and we both loved the garlic aioli. We split this dish and would gladly order it again.

Garlic shrimp
More garlic? Yes please! Andy isn’t a fan of fish or seafood, so the shrimp was all mine. It was cooked in olive oil and garlic, and it was a simple yet flavorful dish. We even dipped a few potatoes in the garlicky sauce. 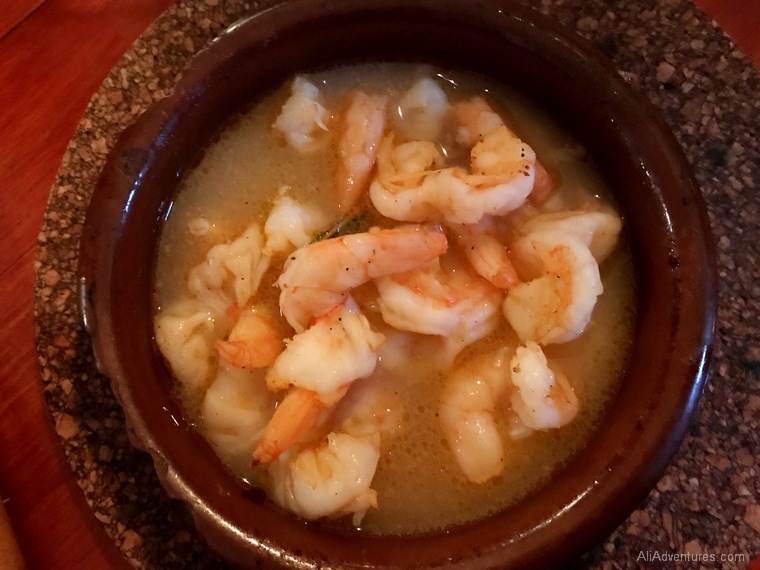 Meat and cheese platter
We wanted one more option to share, so we chose a cold plate with a few different kinds of chorizo (salami/sausage), jamon (ham), and Manchego cheese. Since Manchego is an aged cheese, it has little to no lactose in it, meaning I don’t have issues eating it. This felt more like a Spanish plate than a Portuguese one, but we’ll let it slide. 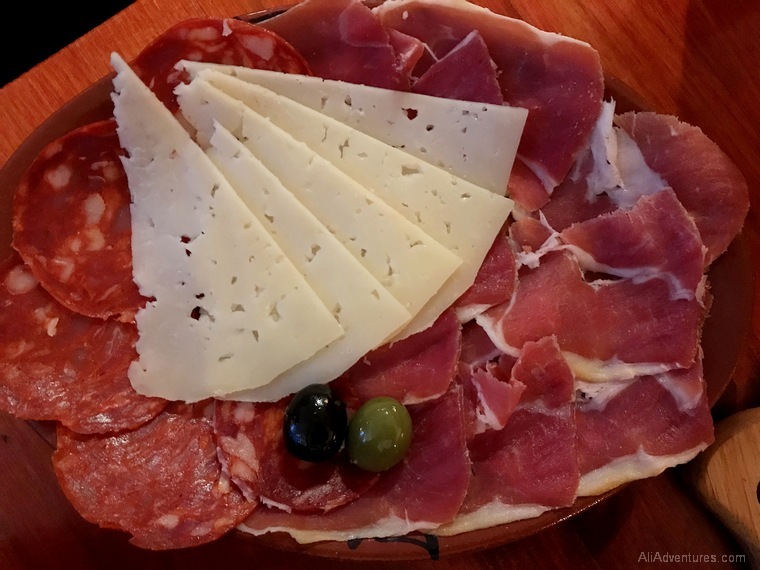 Since we really liked the food, we decided to give this restaurant another try. This time our table for two was near the dessert case…dangerous! But a quick glance around the restaurant confirmed my thoughts about the awkward table from the first night. In general the tables are a little close to each other, but it’s all good.

Dinner
One page of the menu changes from time to time, so we got to try new things. Luckily those garlic aioli potatoes were still listed, so we order those again. We also split chicken in tomato and sherry sauce and beef rolls (basically meatballs) wrapped in sage and bacon. I ordered a bowl of gazpacho for myself, and Andy ordered plums/prunes (it’s the same word in German) wrapped in bacon.

The gazpacho was really smooth, but again, I always think of this as a Spanish soup. The chicken was juicy, and the potatoes were just as delicious as last time. The meatballs were really good, and you know you’ve made a good choice when the Portuguese waitress gets excited by your order. 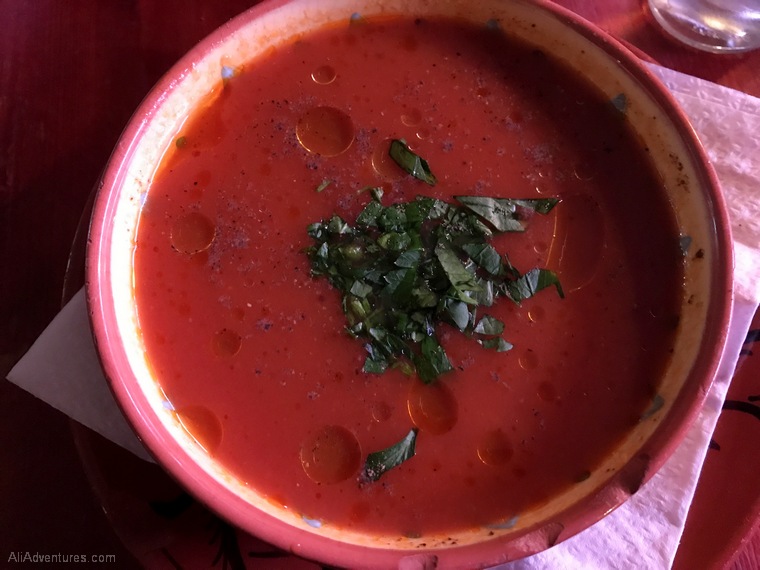 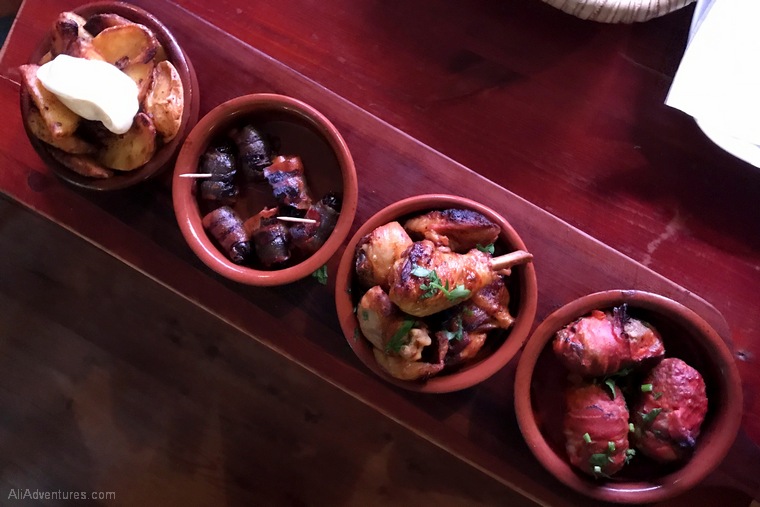 Dessert
After we finished our slightly-too-big but very delicious meal, we ordered Port. And since we had been staring at the desserts all night, Andy ordered some kind of cake called Bolo de Arroz, so something to do with rice somehow. Both were sweet and the perfect ending to a great meal. 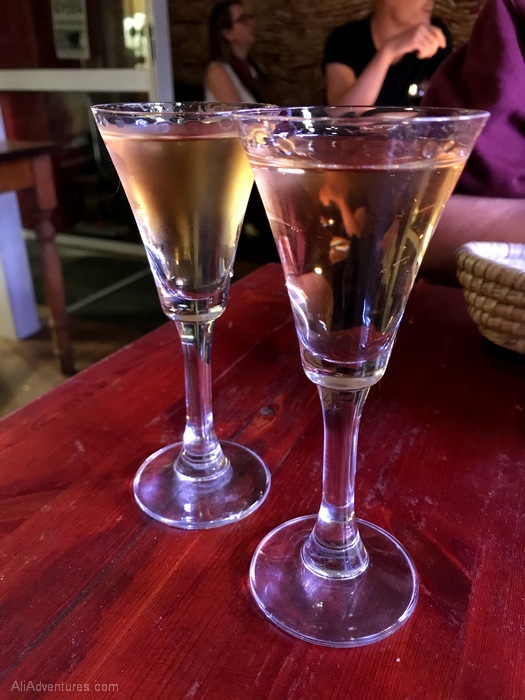 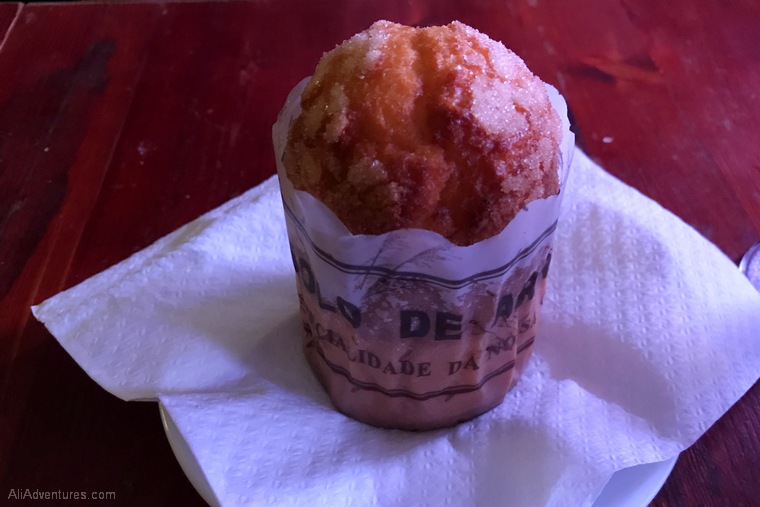 Lisboa Bar is definitely a restaurant we’ll keep going back to for it’s tasty food and friendly atmosphere. But I’d say it’s a little more of a date night/nice occasion type place. It’s not fancy or anything, but it ends up being a little more expensive than our normal restaurants in Berlin. 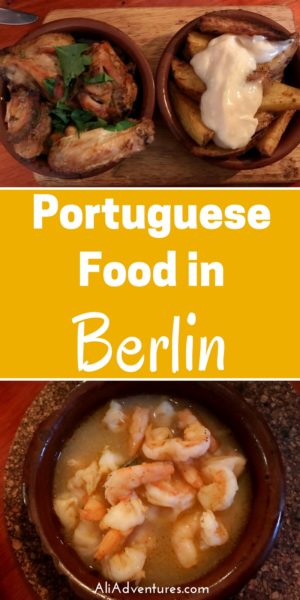 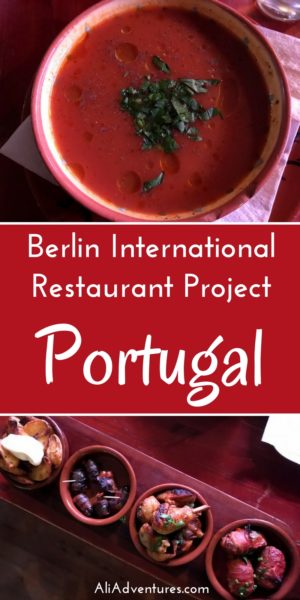 Sign Up
How We Spent 4 Days in Panama City Visiting Boquete, Panama