How Much I Spent in Southeast Asia for Two Months

Looking for a more up-to-date budget for Southeast Asia? Check out this post here to see what my husband and I spent traveling in Singapore, Cambodia, Thailand, and Malaysia for about two months in early 2014.

Usually when people hear I’m traveling around the world for five months, they assume it’s expensive and I must have lots of money to do it. But it’s actually a lot cheaper than you would think. I’m not the most budget minded traveler out there, but I did try to watch my spending and keep track of it as much as possible. Here’s how much I spent traveling in Southeast Asia for two months, through Singapore, Indonesia, Malaysia, Brunei, Cambodia, Laos, and Vietnam. All figures have been converted to US dollars, and I’ve only counted my portion of any shared rooms. (Also, this is my 100th post, so I thought it was appropriate that it be about numbers.)

I spent 50 nights in Southeast Asia, so this comes to an average of about $15.33 per night. And really, I could’ve done better. If I kick out the two nights Amanda and I stayed in Seminyak ($76 for two nights) and the two nights we stayed in Brunei ($69 for two nights), both of which were a splurge, the average for the remaining 46 nights drops to $13.51 per night. I only spent two nights in a dorm during my time in Southeast Asia. The rest of the time was either in hotels, guesthouses, or a private room at a hostel.

More than half of the lodging included free wifi and some sort of free breakfast, ranging from toast to a full buffet or set menu. I stayed in many guesthouses that cost less than $10, or even $5, per person, and most of them were perfectly comfortable, clean and safe, and most were run by the friendliest people.

Where to stay in Southeast Asia

Here are a few of the hotels and guesthouses my husband and I stayed at while traveling in Southeast Asia a couple years after this trip. 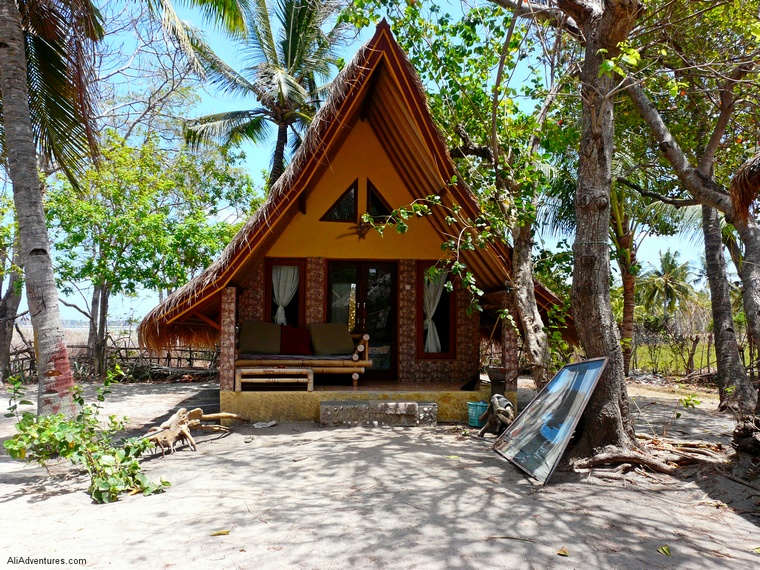 I learned early that I don’t like overland travel. Sitting on a bus for more than a few hours is uncomfortable, exhausting, and tedious. So even though it is usually the cheapest way to travel, I ended up booking more flights than most long term travelers would. This number includes the following flights: Singapore to Bali; Yogyakarta, Indonesia to Kota Kinabalu, Malaysia; Brunei to Phnom Penh, Cambodia; Siem Reap, Cambodia to Pakse, Laos; Pakse, Laos to Vientiane, Laos; Luang Prabang, Laos to Hanoi, Vietnam.

Other Transport Costs in Southeast Asia: $427.25

This is any mode of transportation besides airplanes. Taxis, tuk-tuks, metros, trams, buses, airport transfers, ferries, etc. This ranges from $1 tuk-tuks in Siem Reap to a $40 fast boat and mini van combo from the Gili Islands to Seminyak. Some of these are easy to negotiate, and I’m willing to bet someone with better negotiation skills could’ve gotten better prices on a few. I also got ripped off on my taxi from the Hanoi Airport, but I was running late to meet a friend I met in Siem Reap. Over 50 days, this averages out to $8.55 per day.

Just like everything else in Southeast Asia, activities were usually inexpensive. In Singapore, I went to the Night Safari. In Indonesia, I went snorkeling, saw rice terraces, got a pedicure, took a cooking class, saw two dance shows, went on a volcano tour, and visited Borobudur. In Malaysia, I saw orangutans, proboscis monkeys, and a rain forest park. In Cambodia, I went to the Killing Fields and the Genocide Museum, took a cooking class, and explored Angkor Wat. In Laos, the only activity I paid for was tubing. In Vietnam, I went to the Museum of Literature and the Hoa Lo Prison Museum. I averaged $6.14 per day for activities.

Cost of Visas in Southeast Asia: $125

Unfortunately a lot of countries charge for entry visas, and some need to be obtained ahead of time especially if crossing land borders. Indonesia charged a $25 fee for their visa on arrival. Cambodia was $20 for visa on arrival. Laos was $35 for visa on arrival. The visa on arrival process is very easy for these countries. You have to arrive by air at certain airports (check the embassy websites for more info) and you just fill out a form and pay the fee at the airport. Be sure to bring passport sized photos (two for each to be safe) for Cambodia and Laos.

Vietnam requires that you apply for a visa ahead of time. If you’re traveling by land, you need to know what date you will be arriving and complete the visa process ahead of time. However, if you’re traveling by air and arriving at certain airports, you can apply online for $20 (I used a site called My Vietnam Visa which was really quick and simple, but there are others) and tell them the earliest you will arrive. So for example, if you tell them you will arrive November 1, you can still book your flight for November 3, but you will still have to leave the country within 30 days if you have a 30 day visa. Then once you arrive at the airport, it’s another $25 to complete the visa process, so it cost me a total of $45 for my Vietnam visa. I needed a passport photo here too.

Also be aware that some countries also charge departure taxes at certain airports. Sometimes this is included in the price of your flight, but sometimes it isn’t. When Amanda and I flew out of Yogyakarta, Indonesia, I think it was 100,000 Rupiah, which is about US$12, but don’t quote me on that. We didn’t have enough Rupiah left, paid in US dollars and got Singapore dollars back as change for some reason. (Visa charges were current as of late 2011 for US citizens. Some charges vary depending on country of citizenship.)

Southeast Asia Expenses for Food and Other Miscellaneous Items: $1500?

Here’s where I didn’t do so well at keeping track of expenses. Eating is something you do two or three times a day, and it’s easy to lose track of what you spend quickly. So I had to work backwards, knowing what my bank balance was when I started and knowing what I spent on everything else. Hopefully I did my math correctly.

This category averages out to $30 a day. That’s all meals and snacks, random bottles of water or soda, ice cream stops on hot days, alcohol, bug spray, sunscreen, after sun gel, shampoo, toothpaste, contact solution, souvenirs, postcards and stamps. (Even if a handful of my postcards never made it to their recipients.) Again, this is an area that can definitely be done for less if you’re more careful about eating cheaply and not splurging as much, and I might have overestimated how much I actually spent in this category. Definitely check out the more recent trip to Southeast Asia where I diligently tracked every penny.

In 50 days in Southeast Asia I spent a total of $3,945.89, which is an average of $78.92 per day. Or $62.51 per day if you subtract what I spent on flights. Most people who travel extensively through Southeast Asia would probably say this is outrageously high. If you travel slower than I did, travel overland more than I did, and seek out even cheaper lodging and food, you can definitely get by on half or even less than half of what I spent.

There were days in Siem Reap when I spent $3 on dinner, including a beer. There were days in Laos I spent $3 a night for my half of a twin room. The hotel I stayed at in Siem Reap was $18 a night for a single room, and the hotel I stayed at in Hanoi was $10 a night for a single. Both were nice enough my mom would approve, and included good breakfasts and wifi. So it’s definitely possible to travel comfortably without a lot of money, and you can do it without sharing a hostel dorm room with eight other people.

So when are you buying your plane ticket to Southeast Asia? If you’ve already traveled through Southeast Asia, what was your daily average?