Hanoi – Chickens and Turtles and Rabbits

My flight from Luang Prabang to Hanoi was already booked when I made my final decision to go home for two weeks, and I was looking forward to hanging out with Victoria, who I met in Siem Reap a few weeks earlier. I wanted to enjoy as much of Hanoi as I could, even though my heart wasn’t quite in it. After a delayed flight and spending way too much on transport from the airport, I arrived at my hotel in desperate need of a shower. Victoria was already waiting for me in the lobby, practicing her Vietnamese with the employees. Her motorbike was parked out front, but luckily when I rushed back from my shower, she said we were taking a taxi to meet her friends on Chicken Street.

Having a meal on Chicken Street

I don’t think the official name of the street is Chicken Street, but this is apparently what everyone calls it, and for good reason. While you can certainly get other types of meat here, chicken is the most prominent. Little tables are set up on the side of the road for eating and socializing while the food is cooked nearby on a grill. No one at our table ordered chicken feet, but we did see a group of guys eating them a few feet away, and the cook always had a few on the grill.

I spent a lot of time just wandering around the city. I usually like cities, and Hanoi was no exception. It was also a welcomed change of pace after spending so much time in calm Laos and Cambodia. I loved Hoan Kiem Lake, which was right near the Old Quarter where I spent most of my time. One day while walking by the lake, I looked across the street and saw a huge Playboy bunny logo. It turns out it was a trendy clothing store. 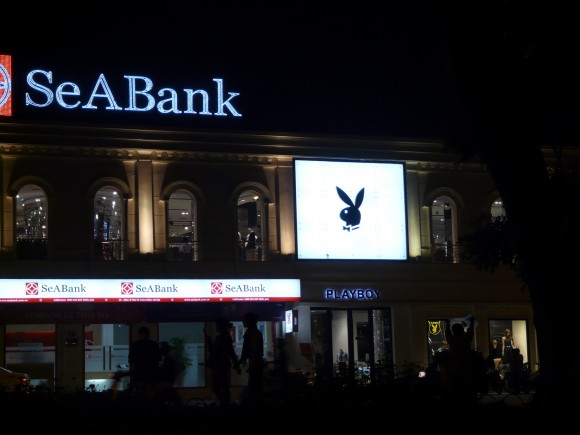 Legend of the turtle

Hanoi has a legend about a turtle returning a sword to its divine owner in Hoan Kiem Lake. As a result, there seemed to be turtles in various forms all over the city. I saw turtle statues and live turtles swimming in the fish pond at the Temple of Literature. There is a temple on a small island in the lake that has a turtle statue of a giant species that is said to still live in the lake, though to the best of my knowledge no one has seen any.

I usually love cities, and Hanoi was no exception. It’s full of energy, lots to look out when you’re walking around, interesting people to talk to on every corner. Laos was very relaxing and laid back, but I love how alive cities like Hanoi are. I will definitely need to plan another trip to Vietnam in the future since I didn’t get to see much beyond Hanoi. Plus I decided not to make a trip out to Halong Bay, so I will be back to this interesting country with Andy another time.