Eating Our Way Through Prague

A few weeks ago, Andy and I hit our 5 year wedding anniversary. To celebrate, we planned a trip to Prague since it the city where we first met in person. It’s no secret that we love food tours, so taking the Eating Prague food tour was a no-brainer.

Prague ham and other tasty meats

Being just over the border from Germany, it came as no surprise to me that Czechs eat a lot of pork. Prague has a specialty called Prague ham, which is sliced ham but way better than any lunch meat you’ll get out of a package. Early on the tour, we tried open-faced sandwiches from a sandwich shop and a variety of ham and sausages from a well known deli. The sandwiches included one with Prague ham, potato salad, and hard boiled egg; one with some sort of celery root salad and tomato; and one with beet root, cheese, and a walnut. 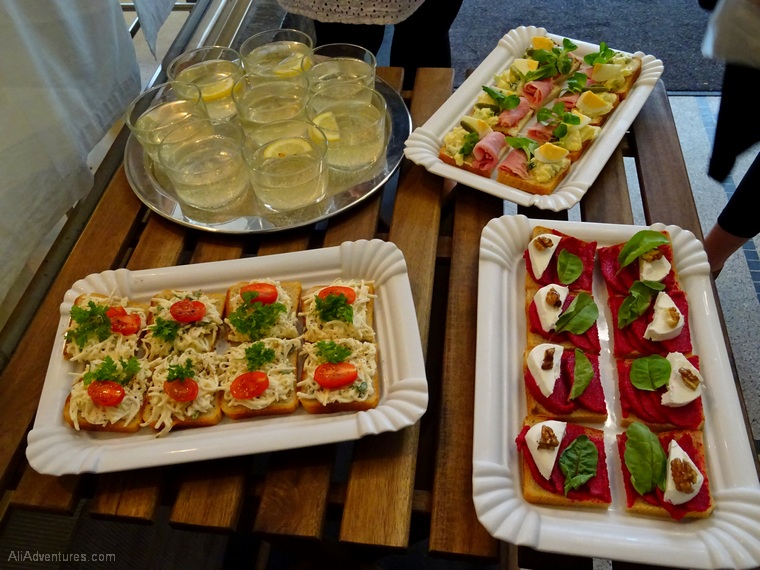 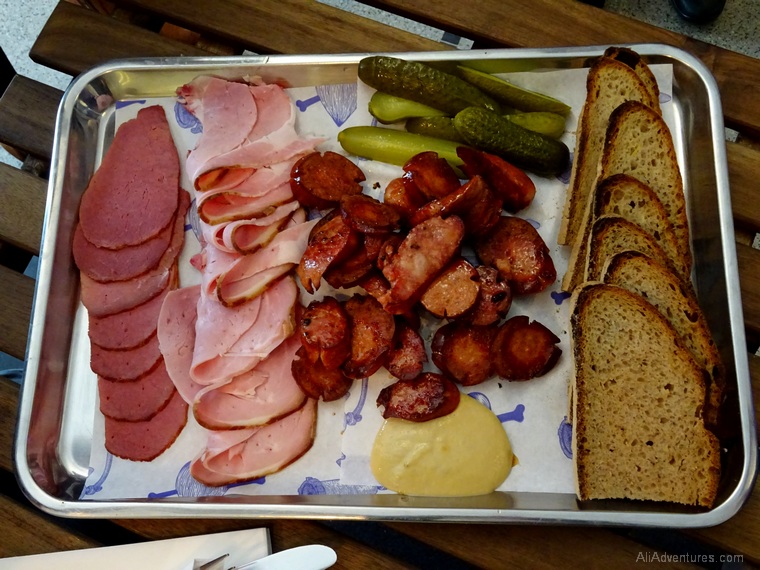 Later on the tour, we went to a cute little cafe with a big garden out back. Here we got to try pork belly paté. Not my favorite dish of the day, but it was still tasty. It was served with a really delicious and sweet black current wine. 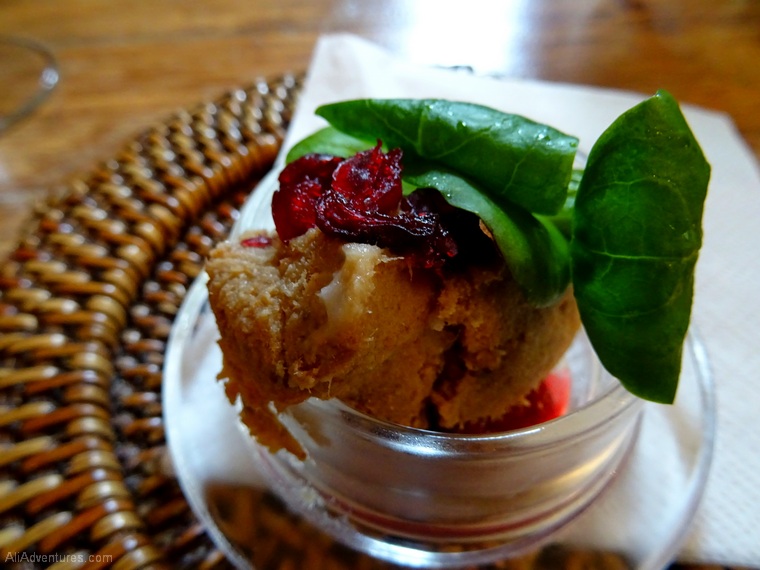 At our last stop of the day, we tried another dish that is typical of Prague cuisine: traditional braised beef served with bread dumplings…and whipped cream. Now, this was quality homemade whipped cream, but I still found it a little strange on top of meat. Nevertheless, I quite enjoyed the roast. 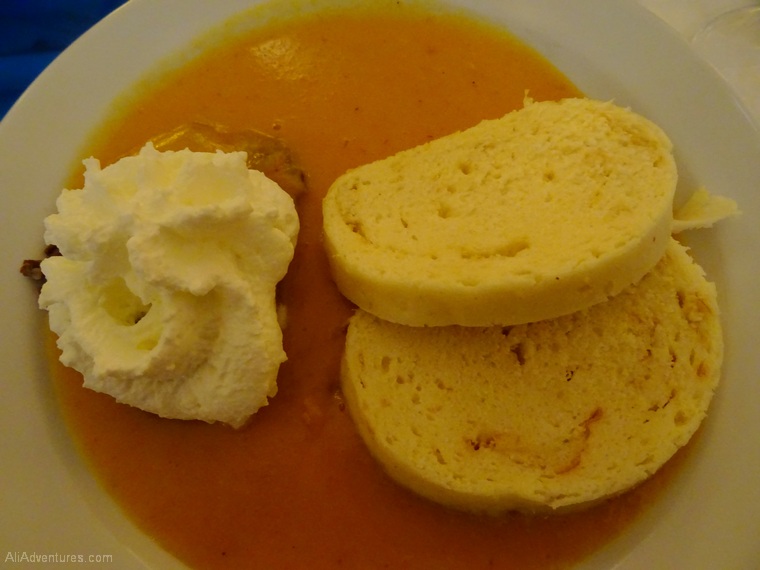 It wasn’t all meat but it was all tasty

Our tour started at a gingerbread shop where they make traditional Czech baked goods. We tasted three different cookies, each better than the next. Andy and I know that one of the important things about preparing for a food tour is to have a light breakfast (or lunch if it’s a nighttime food tour), so all I had eaten that morning was a banana. Starting the tour with gingerbread cookies almost felt like having dessert on an empty stomach would ruin my lunch. But don’t worry, I managed. 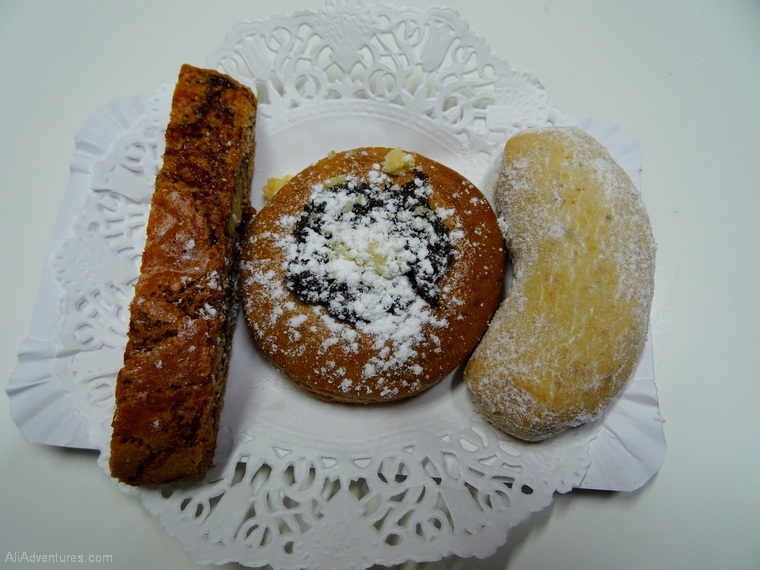 We also went to a tiny restaurant in a bell tower. It was the middle of the day, so we were the only people in there, but I imagine it’s an interesting place for a full meal. We got to try sauerkraut soup, which I quite enjoyed. 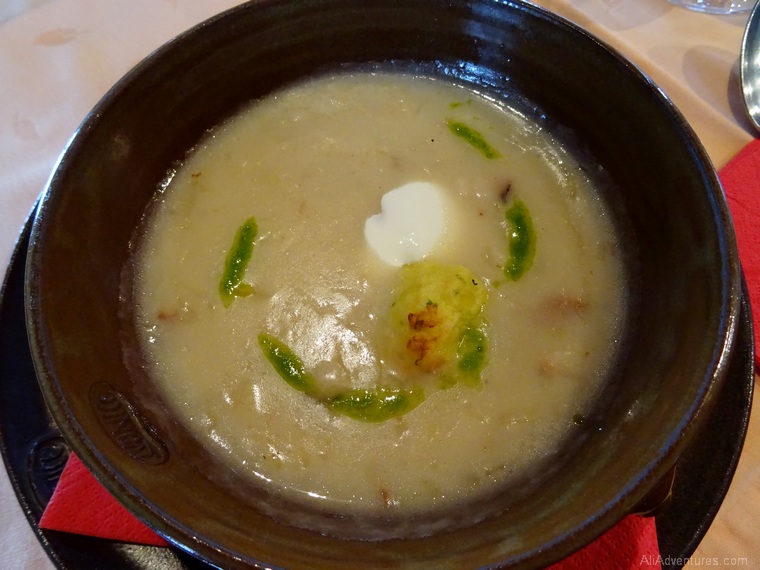 For dessert at the very end of the tour, at the restaurant where we had the braised beef, we got big slices of apple strudel. I couldn’t really fit much in my stomach at that point, but Andy made up for it by eating his and half of mine. 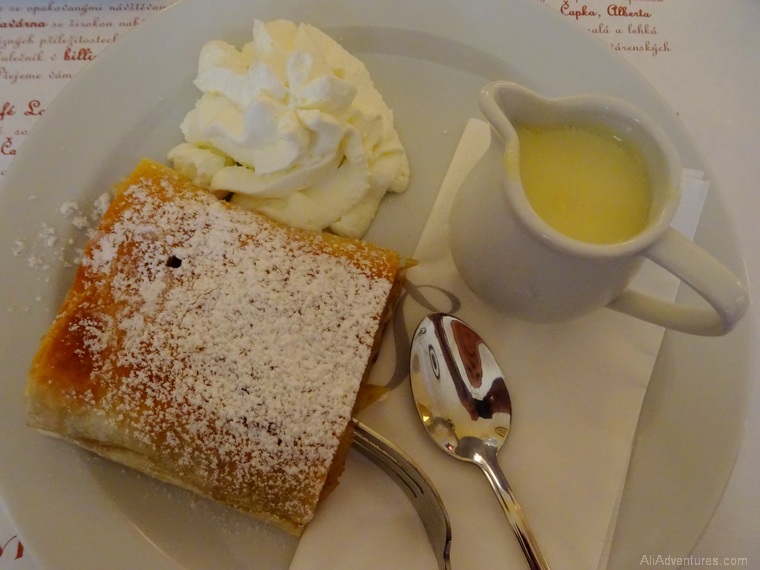 Food in Prague beyond the tour

Food tours generally leave you so full you can barely think about eating anything else that day. Still, I knew if I didn’t have at least something that passed for dinner, I’d wake up in the middle of the night starving. So around 9:30 that night we went to a restaurant our guide recommended that wasn’t on the tour and had a light dinner: Caesar salad for me, Prague ham with bread for Andy. 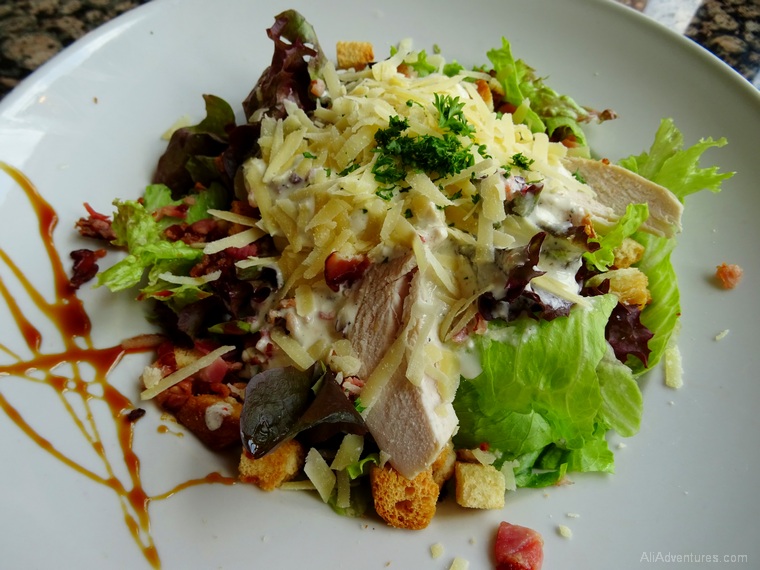 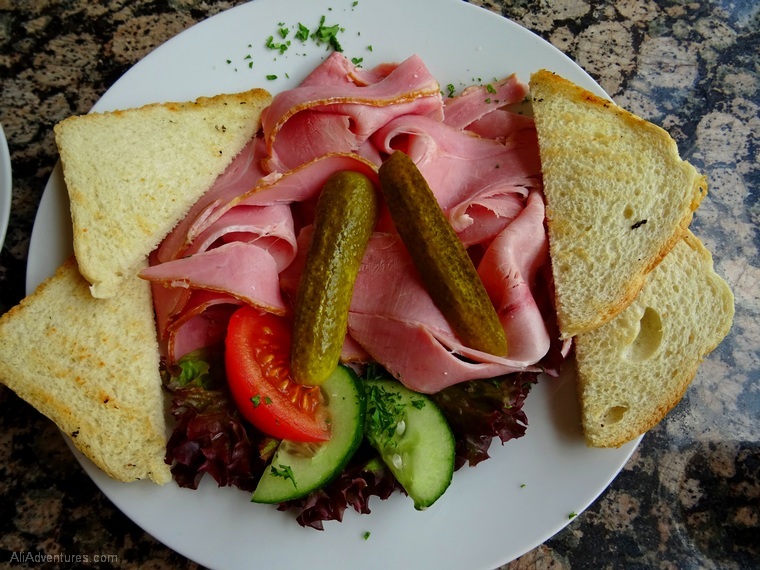 We also went to an ice cream place called Angelato that was listed on the handout we got on the tour. They have two locations, and one is near one of the places where you can get gorgeous views of Prague from above. Lactose pills in hand, I was prepared to try a couple flavors. I had salted caramel and mint chocolate chip, and Andy had chocolate and salted caramel. Delicious, seriously wonderful ice cream.

A good friend of ours lives in Prague but sadly was out of town the weekend we were there. But he gave us some good restaurant recommendations to check out during our visit. So one night for dinner we each had garlic bacon soup to start and an amazingly rich chocolate cake for dessert. For the main course, I had some chicken wings and Andy had sausages. 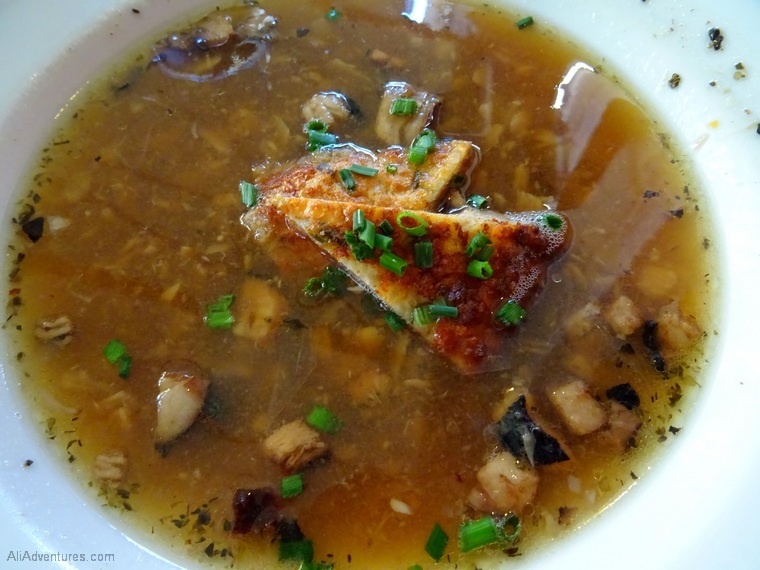 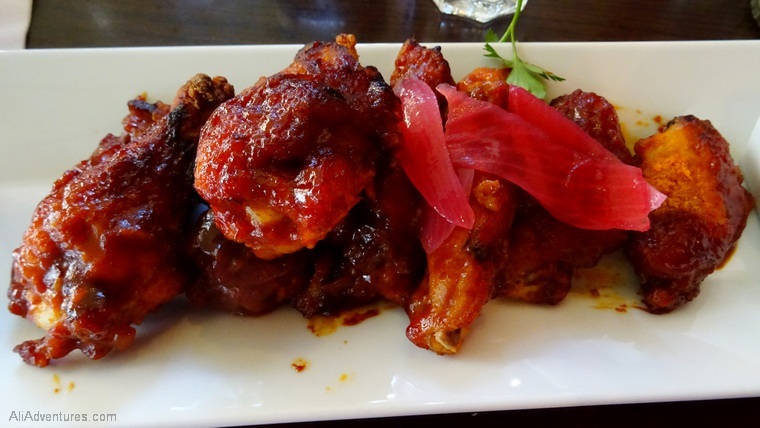 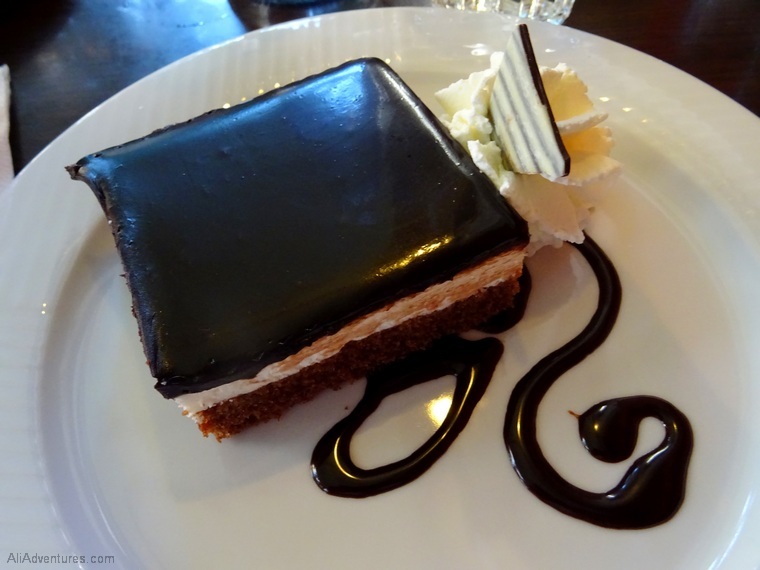 Thanks to Eating Prague for providing us with two complimentary food tours. All opinions and decisions to throw my dietary restrictions out the window are my own.

Sign Up
How Much We Spent Traveling in Central America: Belize, Guatemala, Honduras, El Salvador Scenes From Prague