Everyone always raves about the food in Thailand. If you’re planning a trip to Thailand, the food will probably be a big part of it. We had some pretty good Thai food while we were living in Berlin, but I was curious so see how the real thing compared. Unfortunately we learned that in the Thai islands, it’s much harder to get away from the touristy food. Our first two weeks were spent eating boring chicken fried rice, not-quite-spicy red curry, and Pad Thai that left me wondering why so many people love the dish so much. Finally our luck changed towards the end of our time in Thailand when we were back in Ao Nang.

We booked a room at Ao Nang VIP Hotel, and when we arrived we learned it was run by a man named Jose from Spain. (By the way, great hotel. Try to book a double, not a twin room, the doubles are bigger and have better bathrooms.) The guesthouse was at least a 20 minute walk from the beach, so a bit removed from most of the touristy establishments. When we asked Jose for food recommendations, he pointed us up the street, away from the beach, to a few places he liked that served local food. This began almost a week of delicious food for us. (Please forgive the bad iPhone pictures.)

The first place we tried had Pad Thai on the menu, so I decided to give it one more try. The other times I ordered it, I was given a plate of noodles with chicken and some crushed up peanuts, and there just wasn’t much flavor to it. But this time, my noodles and chicken came with a bunch of little bowls on the side. They gave me a lime, crushed peanuts, dried chili flakes, and sugar. I was able to mix in everything myself, making it just as spicy as I wanted. Previous attempts to enjoy this dish didn’t even include any chili flakes, which made a big difference, and I was surprised how much I liked the lime. I ended up eating Pad Thai here three or four times, and we were almost always the only non Thai customers. 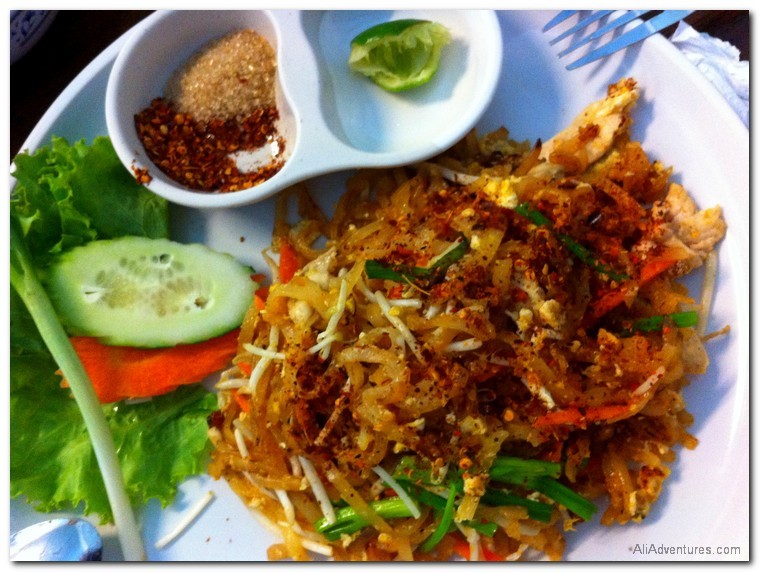 We realized we both liked Penang Curry while we were on Koh Phangan, but it wasn’t until we tried it again in Ao Nang that we became addicted. A little farther up the street from where I had Pad Thai, we split an order of Penang Curry. I loved the peanut-y flavor and it had a good amount of spice to it. Andy and I found that if we each got our own portion of rice and split the curry, we had plenty of delicious food. Again, we probably ate here three or four times. 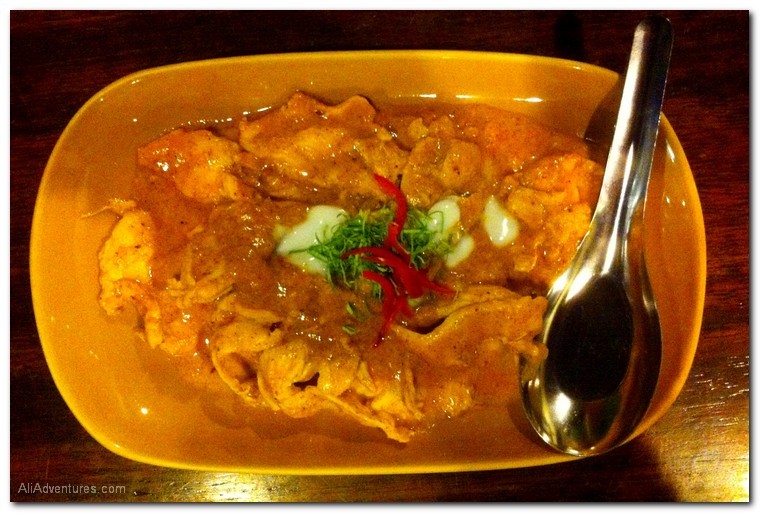 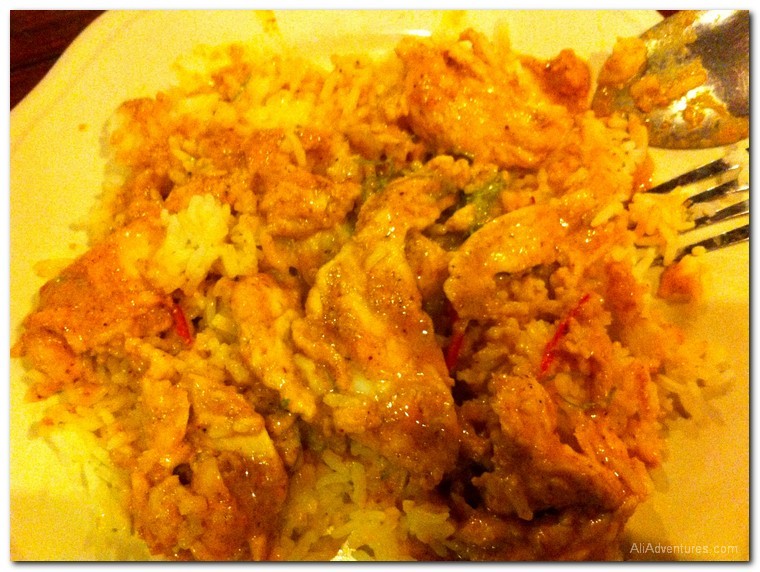 I had ordered red curry a few times, and it wasn’t bad. But there was way too much of it, and it came out in a bowl as if it was soup. We started noticing stir fried red curry, and not knowing what the difference was, we decided to give it a try. Andy and I agreed we liked this consistency much better. There was just enough liquid to cover the rice without seeming too much like pouring soup over rice. Again we each ordered our own plate of rice but split the curry, and it was plenty.

In Ao Nang we tried this at a little restaurant that appeared to be run by two women who also ran the clothing store next door. We had gotten into the habit of ordering our food spicy since it came out bland otherwise. But at this restaurant, the woman hesitated and said, “Thai spicy?” We nodded. I’m pretty sure she still toned it down a bit, but damn was that spicy! I felt like my mouth was on fire, I was sweating and my eyes watered up. But it still had really great flavor, not just all heat. We only ate here twice, but wow, so good! 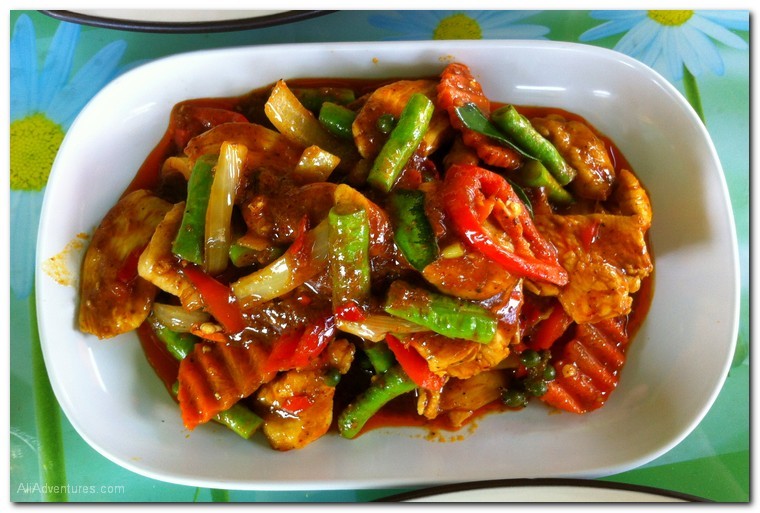 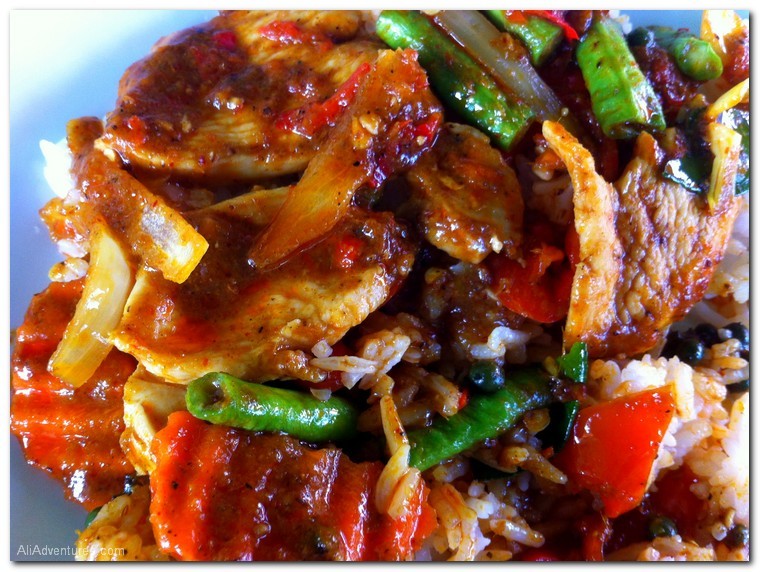 I have no idea what the names of these restaurants were, but if you want to try them, ask to be dropped of at the Tesco grocery store, which is past the post office. You’ll see a glass building coffee shop near the road, and right next door (going towards the beach) is the restaurant where we ate Penang Curry. Staying on the Tesco side of the road, walk a little further the direction of the beach, and you’ll see what looks like two restaurants right next to each other but obviously run by the same people. That’s where I had the tasty Pad Thai. Keep going towards the beach until you see a little restaurant with napkin dispensers shaped like fruit and a women’s clothing store next to it. That’s where we had the extra spicy red curry. All three restaurants are within five minutes walking distance from the Tesco.

I’m so glad we ended up a little farther from the touristy places, because even the one restaurant we tried that was about halfway in between the beach and our hotel was overpriced and not so tasty. The week in Ao Nang, Thailand was probably our best food experience of the whole trip. Not only did we finally find amazingly delicious food, but it was all incredibly cheap.

Sign Up
Hong Islands Tour From Ao Nang Should We Expect People in Other Countries to Speak English?