I’m really enjoying my Berlin International Restaurant Project, although I haven’t been to as many new international restaurants as I’d like lately. Since I don’t want to be constrained to going through the country list alphabetically, I sometimes struggle to motivate myself to choose a country or two and find restaurants. But I’m working on a fun way to make that decision. For now, here’s how I did with Germany, USA, and Italy.

You wouldn’t think it would be that difficult to find good German food in Berlin, but it is. This city is great for international cuisine, but there are surprisingly few places to eat decent German cuisine. The ones we’ve tried in the past were awful and sometimes a bit too touristy.

But one day, a few months after we moved here, we noticed a German restaurant about 10 minutes from our apartment. It’s a Badisch restaurant – Baden is the region of Germany where Freiburg is, where we lived before – and they brew their own beer, which really appealed to Andy.

Once we finally tried Schalander, we knew this would become a regular in our restaurant rotation. I love their schnitzel, though it’s a bit of a splurge/cheat for me because of the breading. Andy really likes their beer, as well as the schnitzel and one or two other things on the menu. Often we sit at the bar and chat with the friendly staff while enjoying our meals. The restaurant has a nice atmosphere.

***Update: I’m so sad to report that Schalander has closed. They still have their biergarten location, but the restaurant in our neighborhood is no longer. We were told that their 10 year lease was coming up for renewal, and the landlord wanted to raise the rent by 40%. Crazy. So they closed.

Andy and I just happened to go in for dinner one Saturday night, and as we were asking for the bill, the waitress asked us, “what are you going to do after we close?” We looked at her, confused, and asked what she meant. So she had to explain that they were closing and that their last day was the following day.

I literally cried. I loved that place. The schnitzel was so delicious. We loved the staff, and several of them knew us from coming in so often. The guy we talk to most often came over and offered us shots of schnapps to ease the pain. It was like a little piece of home was being ripped away.

Afterwards we wandered down to our local Paraguayan restaurant, drank some delicious Paraguayan rum, spoke Spanish to the bartender, and I cried some more. 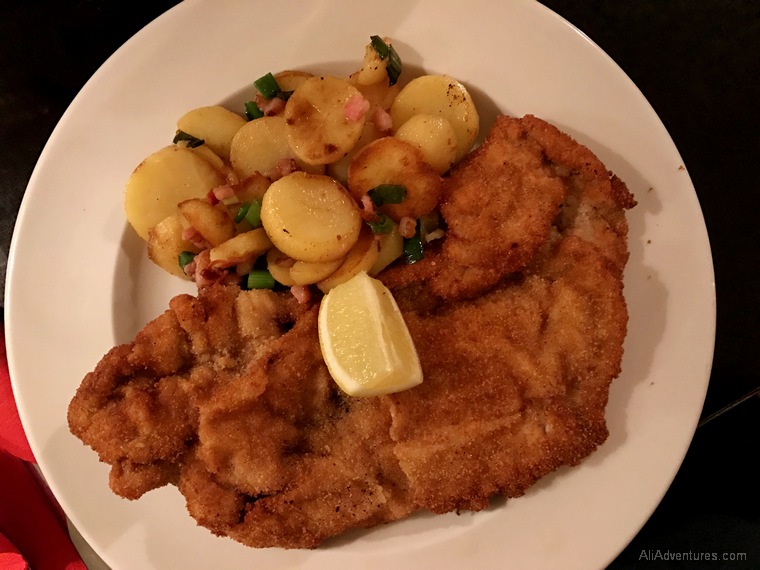 I haven’t found many “American” restaurants here. We’ve tried burger places and pulled pork places, but they’re not really marketing themselves as American. There was a place called American Diner but it went out of business before we could bring ourselves to try it.

But last month when I went to pick up my newly upgraded visa (permanent residency, same as Andy’s!) we saw a little place serving cereal. The walls were lined with more types of cereal than I knew existed. Plus they had things like Pop Tarts and Twinkies and Hershey’s (not that I can eat Hershey’s anymore after tasting the chocolate here) on sale as well, along with little American flags everywhere. 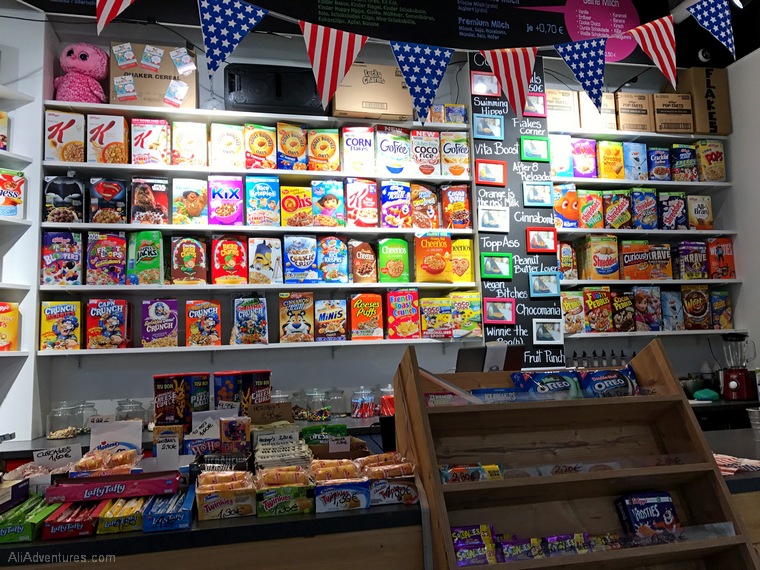 We decided this place was a bit cheesy, definitely a bit touristy, especially given the location, but could be fun. So we popped in for a late breakfast. They allow up to three types of cereal in a bowl, plus a few types of candy to add into it. I couldn’t imagine mixing Honey Nut Cheerios with Rice Krispies, the only types I wanted, so I stuck with Honey Nut Cheerios. And adding candy to it sounded weird.

They also had soy milk, almond milk, chocolate milk, and a few other kinds. I ate my Cheerios with almond milk to avoid the lactose, and Andy ate his cereal without milk. Because he’s weird.

I wouldn’t go back to Flakes Corner – it was a bit expensive – but it was an interesting experience. I imagine people who are missing a little piece of home might stop in occasionally. 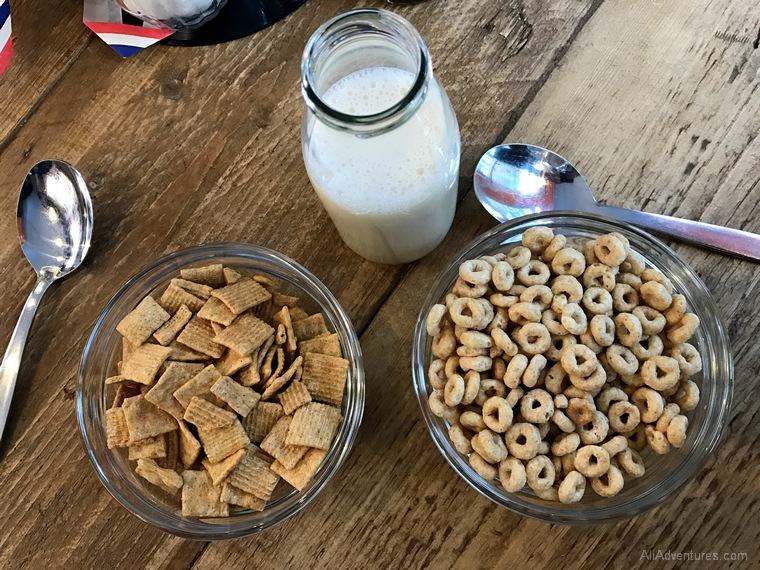 Italy was a little tricky. I’m lactose intolerant, and I have issues with gluten. Most Italian restaurants are heavy on the pizza and pasta, so I don’t eat much Italian food anymore. But last summer, when my health was doing really well, I decided to take my lactose pills and take my chances on the gluten.

A couple blocks from our apartment is PapaLeo, run by an Italian family, and it’s delicious. I’ve made my peace with not eating most things that contain gluten, but I struggle with not being able to eat pizza. This was my first pizza (besides a crappy gluten-free pizza) in nearly two years, and it was soooo good! 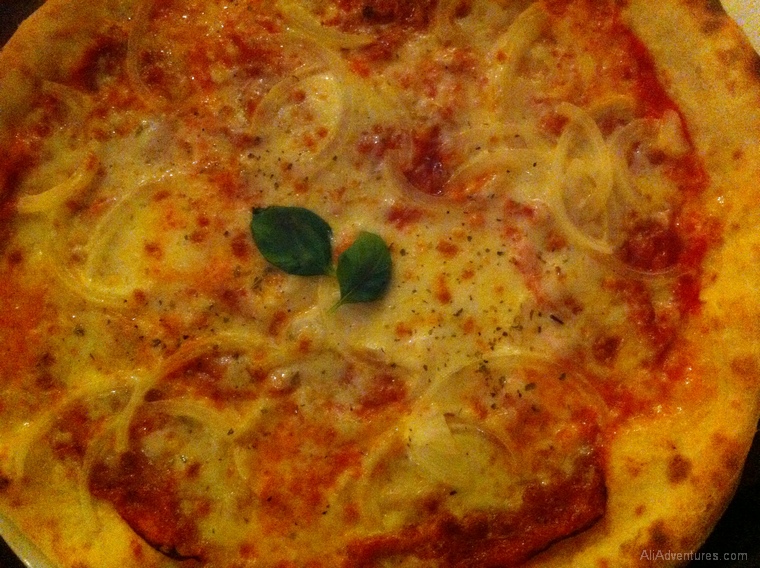 I hope you’re enjoying my Berlin International Restaurant Project! I still have several restaurants I haven’t written about yet, including a new favorite, and I’m sure I’ll try more soon. 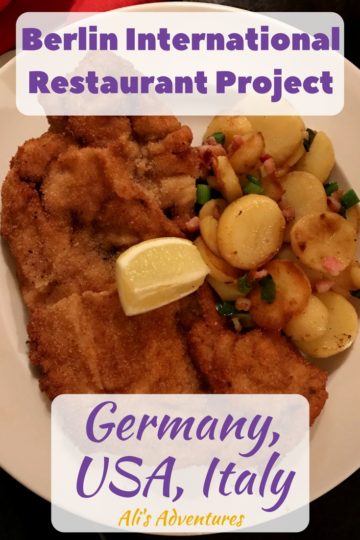 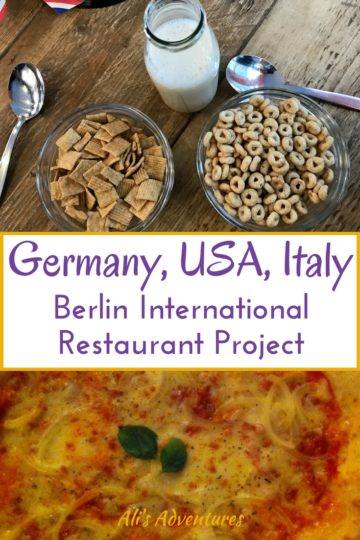 Sign Up
How Much We Spent Living in Sevilla for a Month How Much Money I Make Online: Income Report March 2017