Atlanta Food Walks: A Food Tour of the South

A few weeks before I went back to Atlanta for a week, Akila McConnell, another travel blogger, announced her new food tour company, called Atlanta Food Walks. As you probably know, I love food tours, so I was really excited for her. Even better, she was starting tours right before I arrived, and the timing worked out that I was able to try it out. 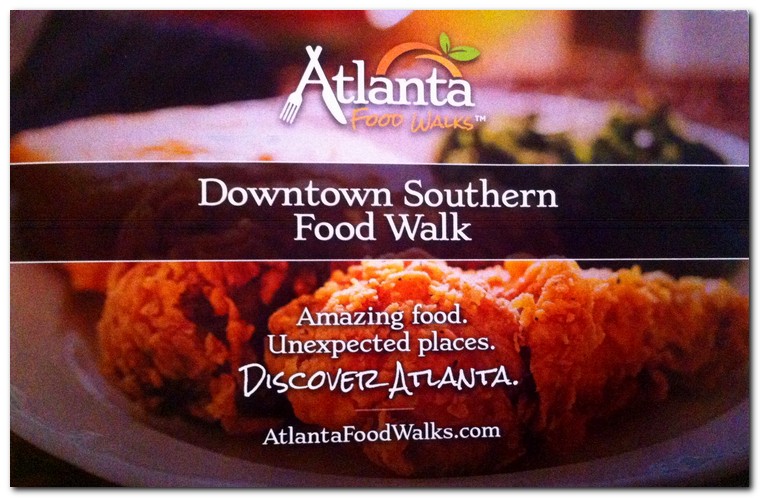 The tour started in Castleberry Hill and ended in Sweet Auburn, two of the city’s oldest neighborhoods, both part of downtown, and somehow both areas I don’t think I’ve ever been to. Before I moved to Germany, I lived in the Atlanta area for 16 years, and for 9 years I lived in the city. But I never really went downtown (I lived in various neighborhoods in midtown and Buckhead) unless I was going to a hockey game or to the aquarium.

I think I was missing out.

The first location on the tour was Paschal’s, a restaurant with an interesting history. Though it is now in a slightly different location, this was the unofficial headquarters for the Civil Rights Movement. Martin Luther King, Jr. used to come here to plan and strategize, and of course, eat tasty fried chicken.

We got to taste this legendary fried chicken, along with candied yams and cornbread dressing. The chicken, still prepared with the original recipe, was delicious, but I was surprised at how much I enjoyed the candied yams. 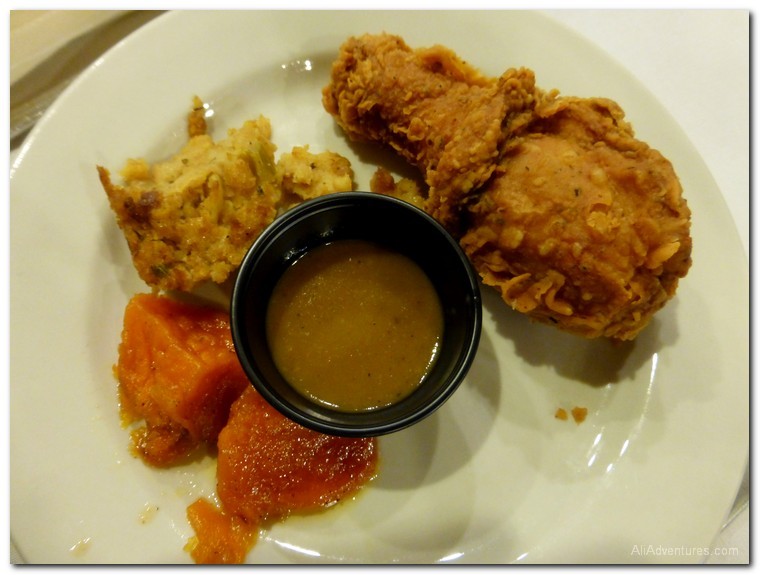 Next up we went to a BBQ restaurant. BBQ is a big deal in the south, and there are different sauces depending on where you are. People get pretty worked up about what kind is the BEST. I grew up in New Jersey, so I don’t have such strong opinions, but I was happy to try what was on offer.

We ate pork belly and pulled pork with three different sauces: Memphis, North Carolina, and Alabama styles. They were all tasty, though I might lean a little towards the NC version. As sides we had macaroni and cheese and collard greens along with strawberry Appalachian moonshine. 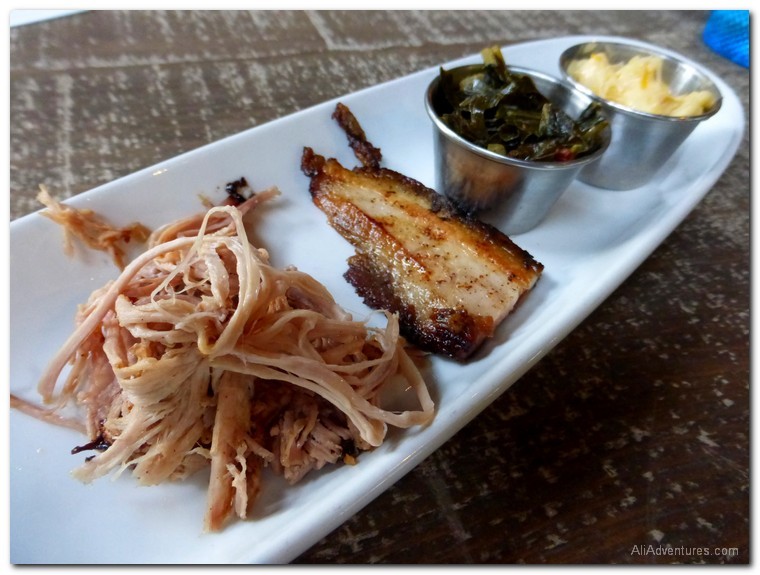 To see that southern food isn’t all fried, next we went to Arden’s Garden, a juice shop that sells smoothies, juice mixes, and detox drinks. We tasted two different juices, which I quite enjoyed, and some cheesy kale chips, which were made with nutritional yeast instead of cheese, so they’re actually vegan.

What would a food tour in the south be without tea? I’ll be honest, I’m not a big fan of tea. Hot, cold, sweet, unsweet, it’s just not my thing. But it’s a very southern thing. This was an interesting shop to see because they had so many different blended teas for sale, all arranged by style with signs to let you know if they have caffeine or not. We tried two fruity ones, which actually helped me enjoy them a little more. 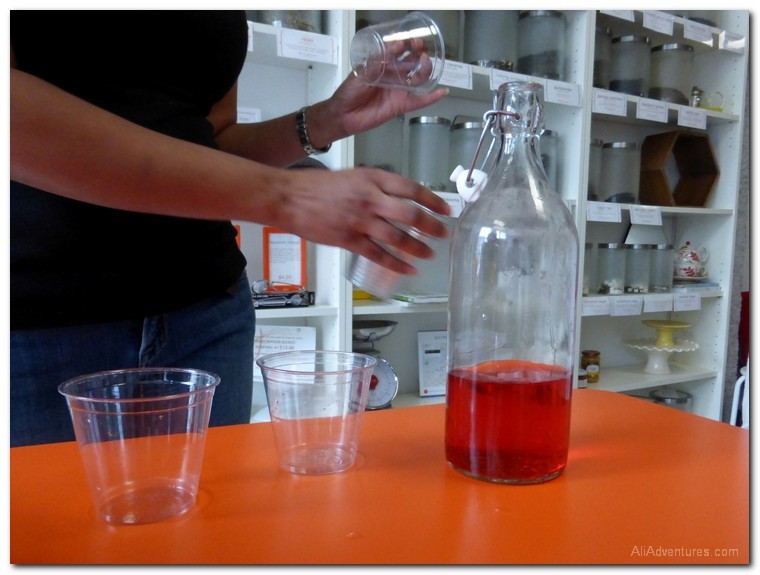 I’m feeling like a broken record here, but as someone who did not grow up in the south, I’ve never really liked grits. So I was a little hesitant when we got to the next stop and found out our meal was low country shrimp and grits. But my normal approach with food tours is to try everything, so I made no exception here.

It was delicious! I was seriously impressed. Shrimp, grits that didn’t seem too gritty, cheese, sausage, tomatoes, and who knows what else combined into one of my favorite tastings on the tour. 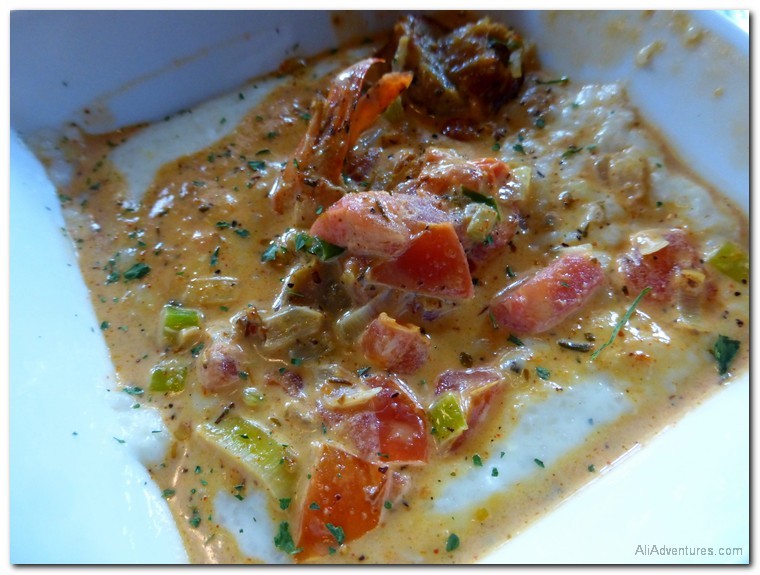 Planning a trip to Atlanta? Check out this itinerary for 3 days in Atlanta.

The last location on the tour was the Sweet Auburn Curb Market. Like in most markets, this one has the standard stalls selling meats and produce, along with several cafes and other shops. We made two stops here, and the first was Metro Deli where Akila got us some beans, cornbread, banana pudding. The cornbread and banana pudding were tasty, but I skipped the beans. 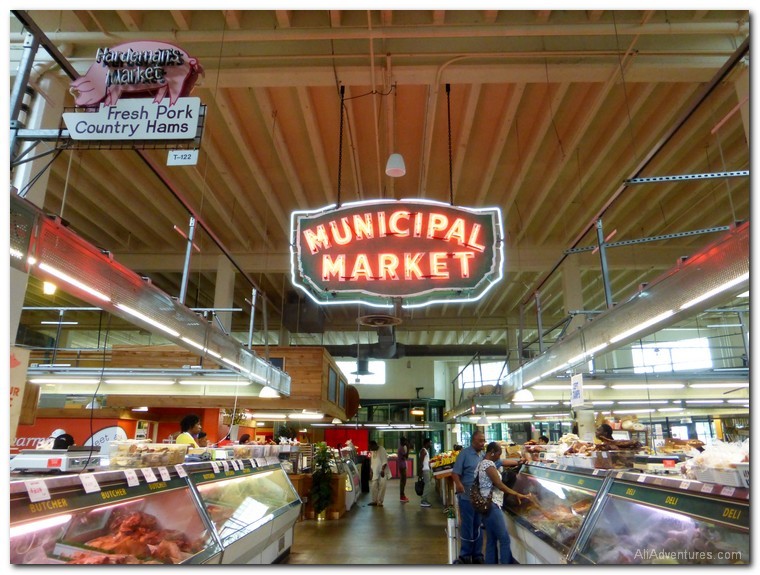 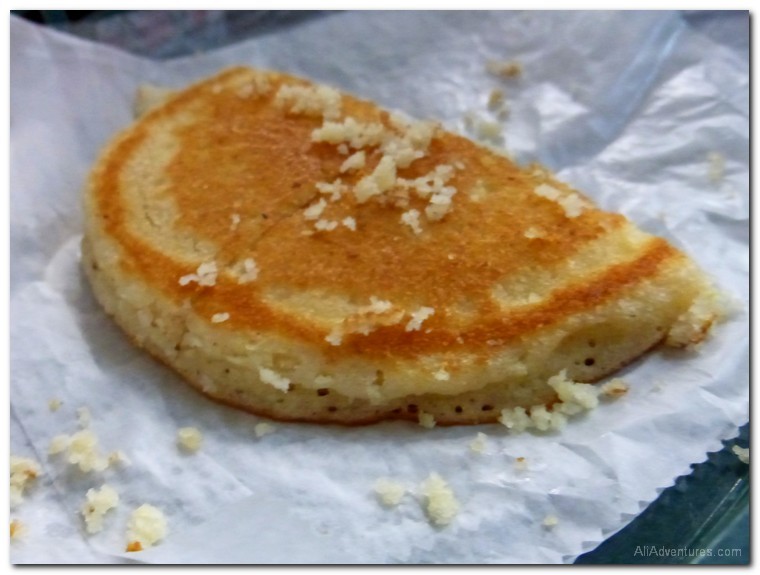 After Metro Deli, we wandered to the other side of the market to Miss D’s Pralines. It’s a New Orleans style candy shop run by a woman who came to Atlanta to escape Hurricane Katrina. I didn’t have much room in my belly at this point, but I did try one sweet praline. 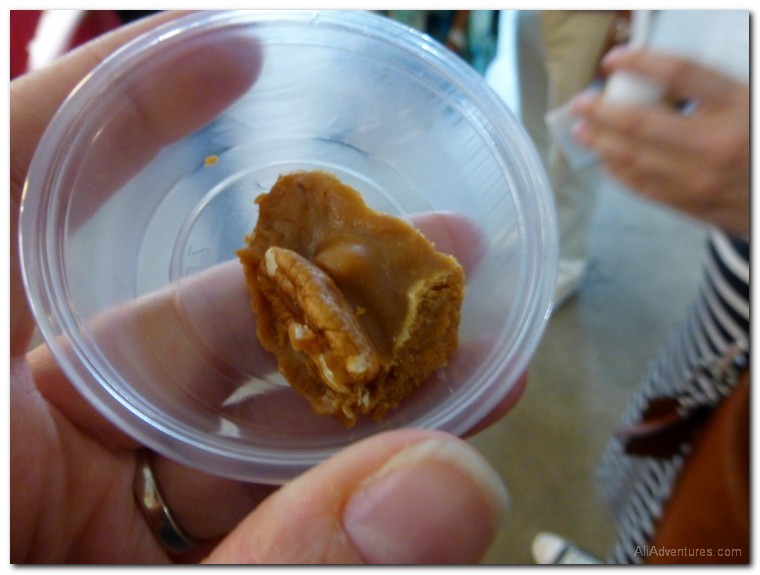 Non Food Elements of the Tour

One of the things I like best about food tours, aside from the food itself, is the link the food has to the culture and city. Throughout this tour, Akila taught us about the Civil Rights Movement and Atlanta’s place in that history. She explained how southern food almost all comes from one of three groups: the British, the West Africans, and the Native Americans. She also showed us around downtown, including some interesting street art, historic buildings, and an area that is often (including while we were there) used for filming movies and TV. 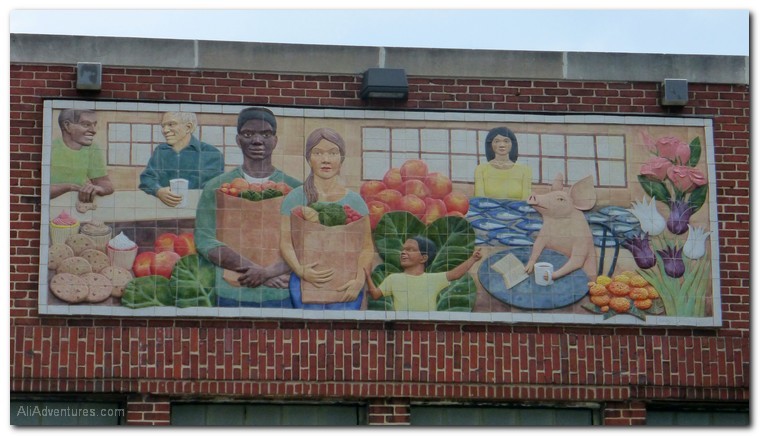 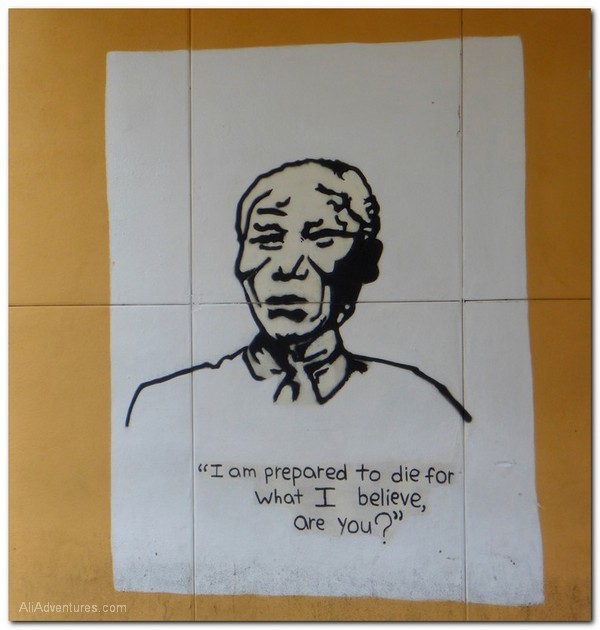 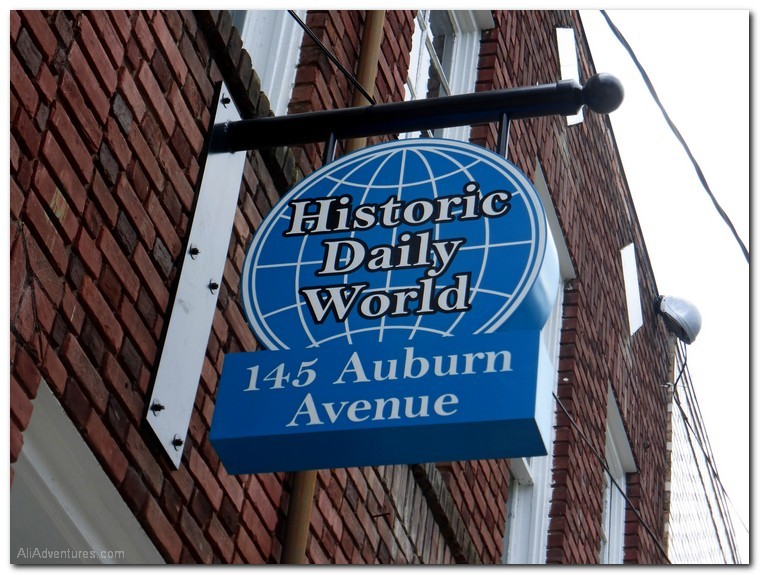 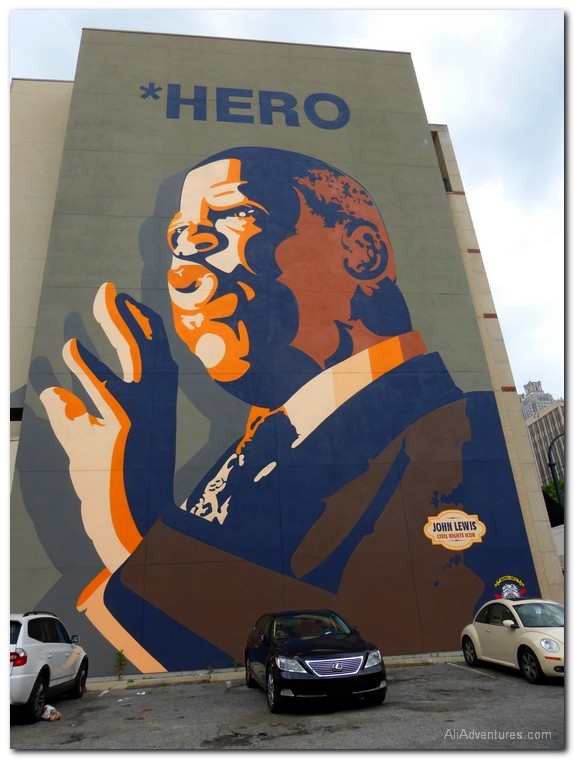 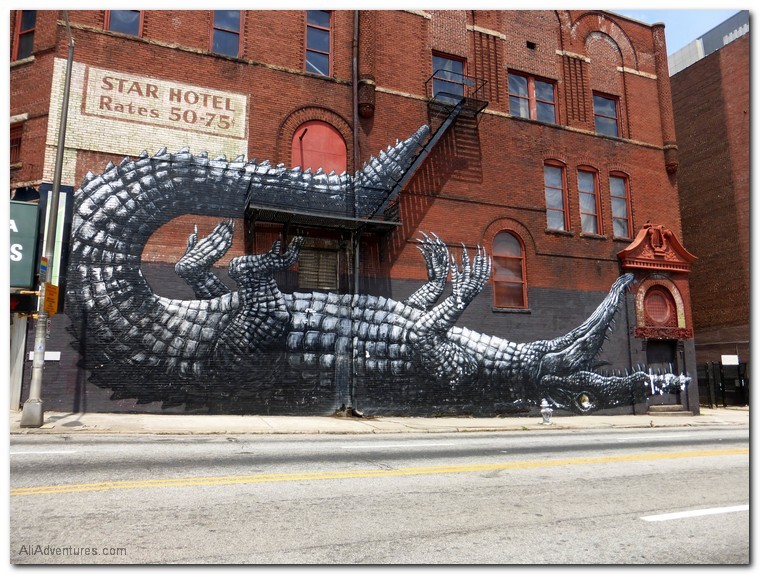 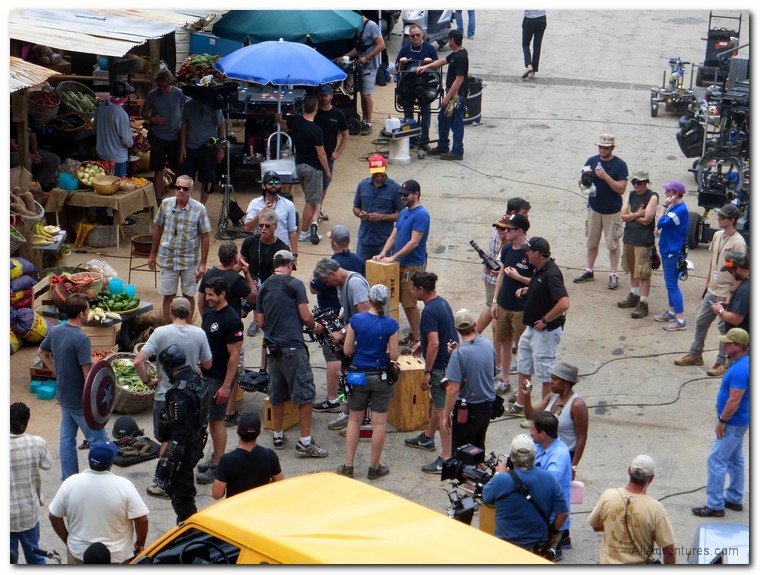 I had never seen this side of the city, and if I still lived in Atlanta, I’d probably go down there more often. It was lots of fun playing tourist in my former hometown that day, and I learned a lot about the city’s history. Not only did Akila provide us with some amazing food, but she also told fascinating stories that made the day that much more enjoyable.

The tour costs $65 (at time of writing) and includes 15 tastings at 7 locations. There’s about 2 miles of walking spread out over 4 hours. The tour is rain or shine. If you have dietary restrictions, mention it when you book the tour, and your tastings can be modified.

You’ll get a booklet with the names and addresses of all the restaurants and shops on the tour, a fun map with other restaurant recommendations, and coupons to use later. If you’re visiting Atlanta, try to do the tour early so you can use those coupons to go back for more delicious food.

For more information and to book your tour, click here.

Thanks to Akila and Atlanta Food Walks for providing me with a complimentary tour. All opinions are my own.